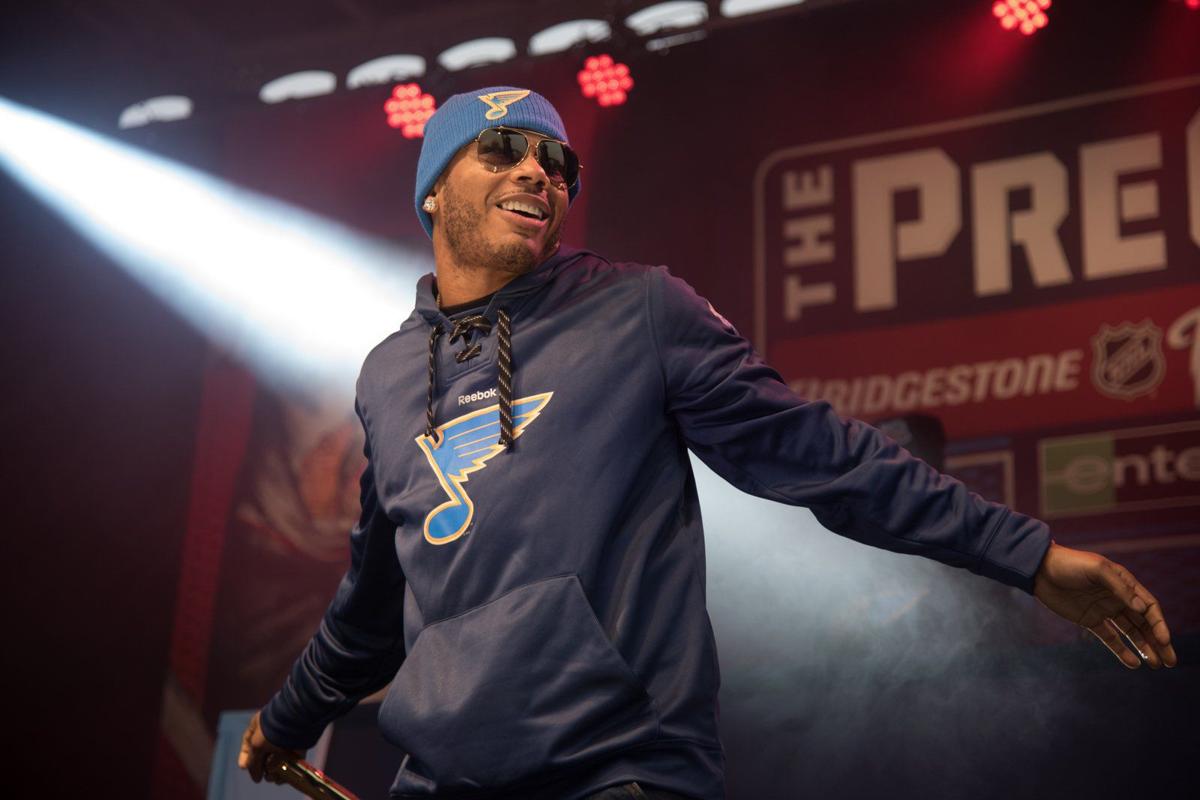 Nelly performs Jan. 2, 2017, at a tailgate party outside Ballpark Village before the NHL Winter Classic at Busch Stadium. 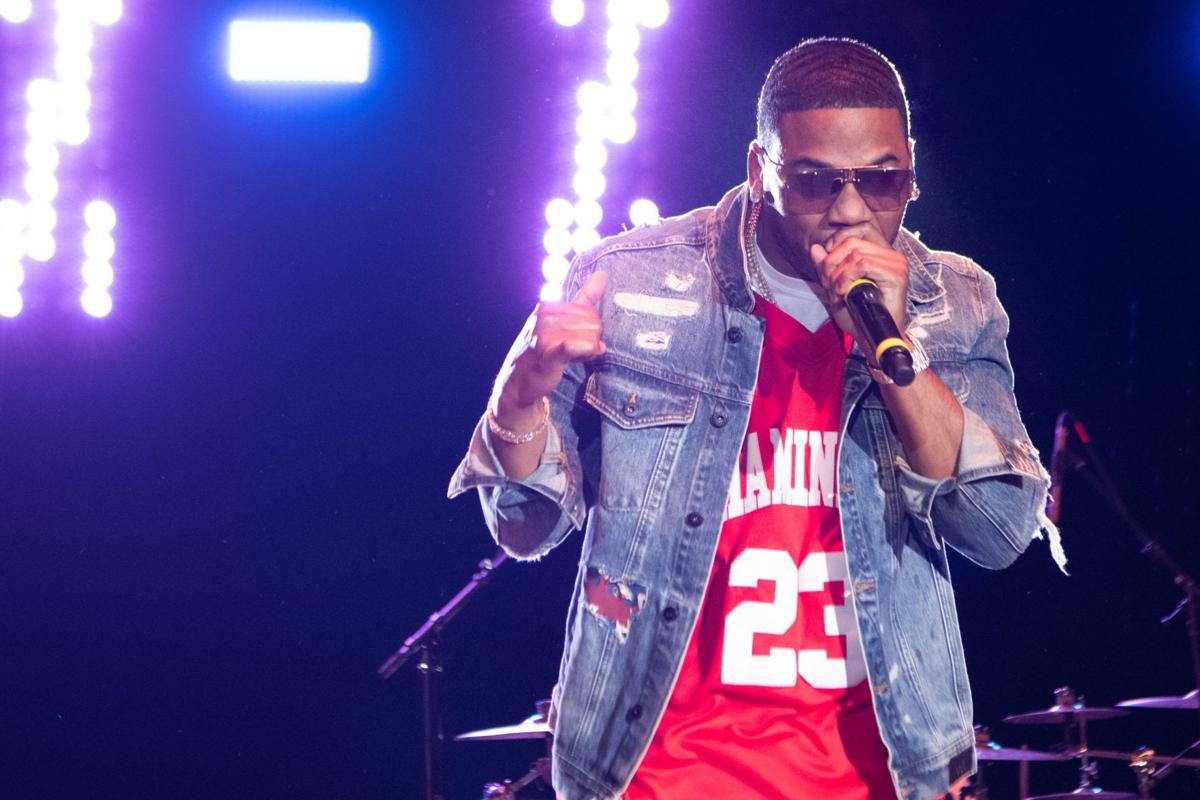 Nelly performs in 2019 at the Liberty Bank Alton Amphitheater. 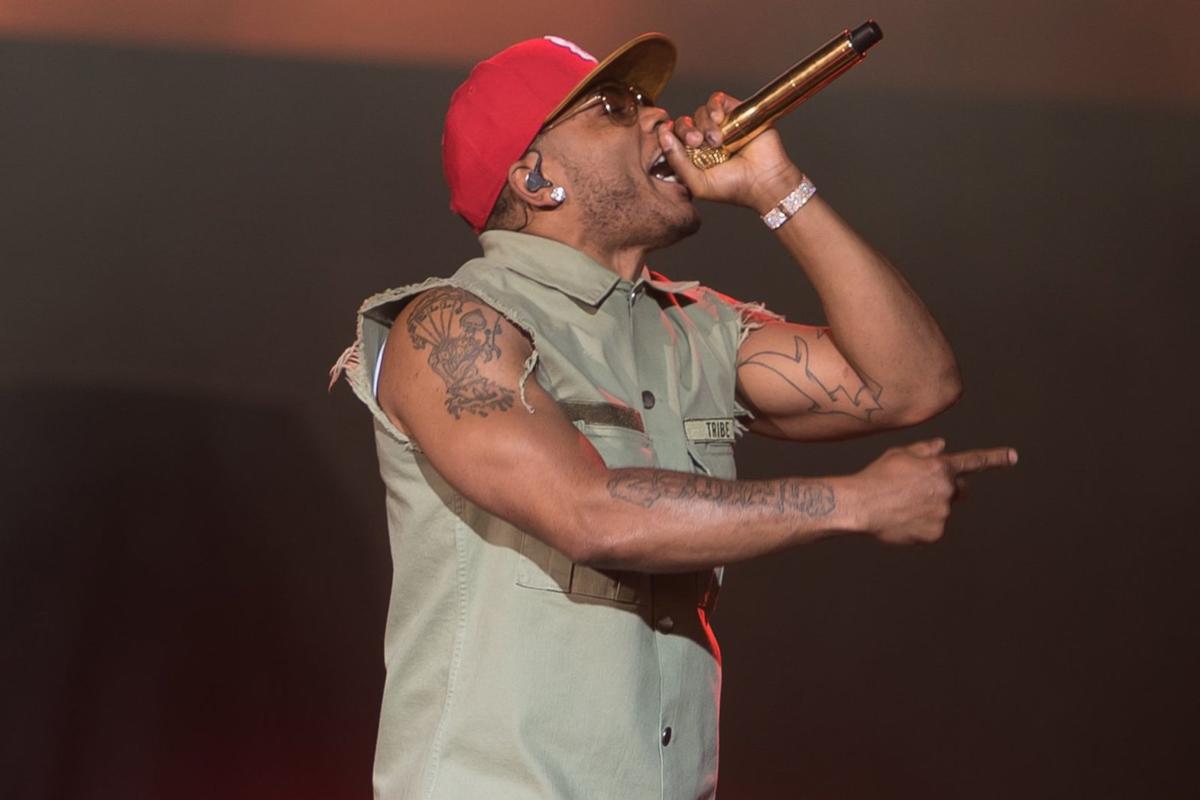 St. Louis rapper Nelly brought a mighty Midwest swing to the music world with “Country Grammar,” his unlikely phenomenon of a debut album, which marks its 20th anniversary today, June 27.

With the album in 2000, he cleared a path straight to the top during a big release year with new albums from Britney Spears, Coldplay, ’N Sync, Green Day, Madonna, Outkast, U2, Ludacris, Erykah Badu and Sade.

“Country Grammar” is in a rare class of hip-hop albums to be awarded a diamond certification, selling more than 10 million copies.

In early 2000, Universal Records executives invited VIPs to Blueberry Hill to hear the label’s buzzy new rapper, University City native Cornell Haynes Jr. He had been plucked from his group, the St. Lunatics, for a shot at stardom.

Though everyone in the room was rooting for him, no one knew Nelly would be the next big thing.

At the time, there had been only a couple of rappers with St. Louis ties to make any real noise nationally: Domino (“Getto Jam”), who claimed Long Beach over St. Louis because California wielded more hip-hop cred, and Sylk Smoov (“Trick Wit a Good Rap”), credited as the first St. Louis rapper with a major record deal. The area’s only other claim to rap fame was the fact that East St. Louis radio station WESL was the first to play “Rapper’s Delight” by the Sugarhill Gang.

The deck may have been stacked against Nelly. According to his Universal publicist in 2000, hip-hop media was hesitant to cover this unconnected, unproven St. Louis rapper after hearing his single. Billboard magazine’s rap editor at the time said he couldn’t stand Nelly’s album — though he’d later come around.

Ultimately, Nelly’s newness paid off. His music felt like a fresh alternative to the hip-hop coming from the coasts.

And he was always sure of himself when it came to introducing the masses to St. Louis hip-hop.

“I think I can do it, for sure. That’s what I want to do and that’s the plan,” he told the Post-Dispatch before the release of “Country Grammar.” “I look to Missouri as being the last in everything — the last to give up slavery to the last to get on the map. But nothing comes easy, and everybody has to wait their turn. So we sharpened up our skills, worked harder and appreciated everything we got.”

He delivered — and then some.

The “Country Grammar” single, released in February 2000, was something all its own. The insanely catchy, singsong tune was brazen right off the top, mixing a classic children’s rhyme with a gun reference. The unedited version of the song opens with “I’m going down down baby yo’ street in a Range Rover/Street sweeper baby, cocked ready to let it go/Shimmy shimmy cocoa what? Listen to it proud/Light it up and take a puff, pass it to me now.”

Apparently, it was just what the world was waiting for. The song was a top 10 Billboard 100 hit and No. 1 on Billboard’s Hot Rap Songs chart.

The album came next, a St. Louis hip-hop affair that produced several hit singles: “E.I.,” “Ride Wit Me” and “Batter Up.”

The album’s unabashed St. Louis flow included the use of local lingo, the song “St. Louie,” posse cut “Steal the Show” with the St. Lunatics, production by Jason “Jay-E” Epperson of Basement Beats, and an intro and outro by comedian Cedric the Entertainer of Berkeley.

It didn’t take long for his local influence to resonate. Most notable was Chingy (“Right Thurr,” “Holiday Inn,” “One Call Away,” “Pullin Me Back”), who once told the Post-Dispatch that Nelly’s success influenced him in a big way.

“It opened the door and let me know, at the same time I was doing my own music, that you can be an artist from here and make it in a major way,” he said. “I saw it and said someone from St. Louis can actually be serious, and get it done. That’s the importance of that album to me. It was a lot of encouragement there.”

There was also the rise of those in Nelly’s direct camp. St. Lunatics released their own album, “Free City,” and there were solo hits from group members Murphy Lee (“Wat Da Hook Gon Be”) and Ali (“Boughetto”).

A number of hits came out of St. Louis, but the music — undemanding with an undeniably feel-good party vibe — often wasn’t highly regarded.

Nelly continued to ride the wave, upping his game and adding production from the Neptunes, Jermaine Dupri and Just Blaze for chart-topping follow-ups including “Nellyville” (2002), “Sweat” (2004) and “Suit” (2004).

He has performed at the Super Bowl; won Grammy Awards (“Dilemma,” “Shake Your Tailfeather,” “Hot in Herre”); debuted “Suit” and “Sweat” at No. 1 and No. 2 simultaneously on the Billboard 200; and landed country smashes with Tim McGraw (“Over and Over”) and Florida Georgia Line (“Cruise”), paving the way for Lil Nas X.

But that initial rush of success with “Country Grammar” surely means the most, not just to Nelly but to St. Louis.

“All That You Can't Leave Behind,” U2

After its divisive predecessor, “Pop,” this album was so big it won major Grammy awards over the course of two years.

Singles: “Beautiful Day,” “Elevation,” “Walk On,” “Stuck in a Moment You Can’t Get Out Of”

Before she exploded as a pop-rock queen with “Get This Party Started,” Pink was every bit the budding R&B singer produced by “Real Housewife” Kandi Burruss.

Jay-Z went for more soulful productions en route to this album with songs from Kanye West, the Neptunes and Just Blaze, serving as a bit of a blueprint for his next and greatest album, “The Blueprint.” "The Dynasty" includes one of his more ill-fated collaborations with R. Kelly.

Singles: “I Just Wanna Love U (Give It 2 Me),” “Change the Game,” “Guilty Until Proven Innocent”

Grammy recognition: Best Rap Performance By a Duo or Group for “Change the Game” (nomination)

“Who is Jill Scott? Words and Sounds Vol. 1,” Jill Scott

Scott established herself as a new soul force to be reckoned with right out the box.

Nelly casts the biggest spotlight ever on St. Louis-honed hip-hop.

The soul singer’s second album put him over the top — with the help of a particularly revealing video.

A true pop juggernaut of an album that was hard to stop.

Grammy recognition: Record of the Year and Pop Performance by a Duo or Group with Vocals for “Bye Bye Bye,” Pop Vocal Album (nominations)

Back when veteran acts used to catch a break in the sales and awards arenas ...

A bonafide blockbuster for Eminem, controversies notwithstanding.

“Stankonia” was the perfect filling between “Aquemini” and “Speakerboxxx”/”The Love Below.”

“Return of Saturn,” No Doubt

A comedown from “Tragic Kingdom” that nonetheless delivered a few bonafide hits.

The country band will celebrate its 20th anniversary and its farewell in one fell swoop this summer.

Singles: “This Everyday Love,” “While You Loved Me,” “Prayin’ for Daylight”

The album that introduced Coldplay to the world.

“Oops!...I Did It Again,” Britney Spears

Britney Spears’ “Oops” was her best mistake ever.

Who says bluegrass and Americana can’t rock the music world?

Singles: “I Am a Man of Constant Sorrow”

Grammy recognition: Album of the Year, Best Compilation Soundtrack Album, Producer of the Year for T Bone Burnett, Best Male Country Performance for Ralph Stanley for “Oh, Death” and Best Country Collaboration with Vocals for "I Am a Man of Constant Sorrow" by the Soggy Bottom Boys (wins)

This strong follow-up to her “Ray of Light” continued Madonna’s commercial and artistic shine.

There was definitely no sophomore slump here for Badu at her best.

A widely perceived miss from the grunge band but nothing from which it couldn't recover.

Singles: “Nothing As It Seems,” “Light Years”

The elusive Sade Adu and her band Sade returned with another winner.

Despite an anti-publicity campaign, the English rock band still wound up with a lauded, top-selling album.

Sales: Over a million copies sold

Some other albums released in 2000

“Back for the First Time,” Ludacris

“Born to Do It,” Craig David

Live music is back. Live Nation announced that St. Louis, Nashville and Indianapolis will host drive-in concerts with big-name stars.

"If you like what you’re hearing, I want to hear you honk your (expletive) horn," Nelly instructed. "We’re not clapping; we’re honking tonight.”

Nelly celebrating 'Country Grammar' virtually this weekend, and album will be reissued

He has a virtual concert this weekend celebrating the album, and the album also sees a re-release this weekend.

Nelly performed the album from top to bottom with no detours. Earlier this month, he celebrated "Country Grammar" during Live Nation's Live From the Drive-In concert series in the Hollywood Casino Amphitheatre parking lot.

The vinyl will be available Nov. 20.

Nelly and Ali have been going back and forth with their versions of their group's origins, but to what gain?

Everyone knows Nelly put St. Louis hip-hop on the map in 2000 with his “Country Grammar” album. But veteran DJ G.Wiz says the music and cultur…

Nelly performs Jan. 2, 2017, at a tailgate party outside Ballpark Village before the NHL Winter Classic at Busch Stadium. 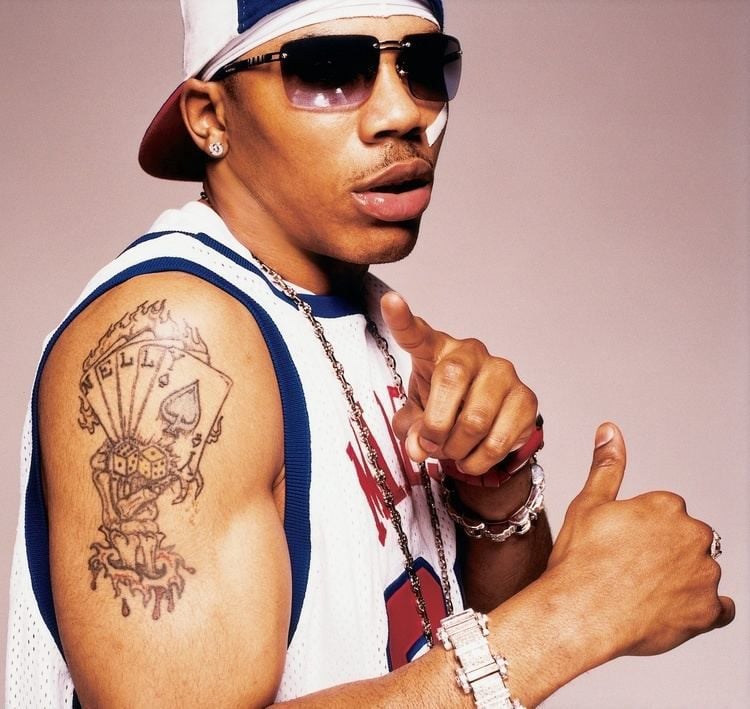 An early publicity photo of Nelly

Nelly performs in 2019 at the Liberty Bank Alton Amphitheater. 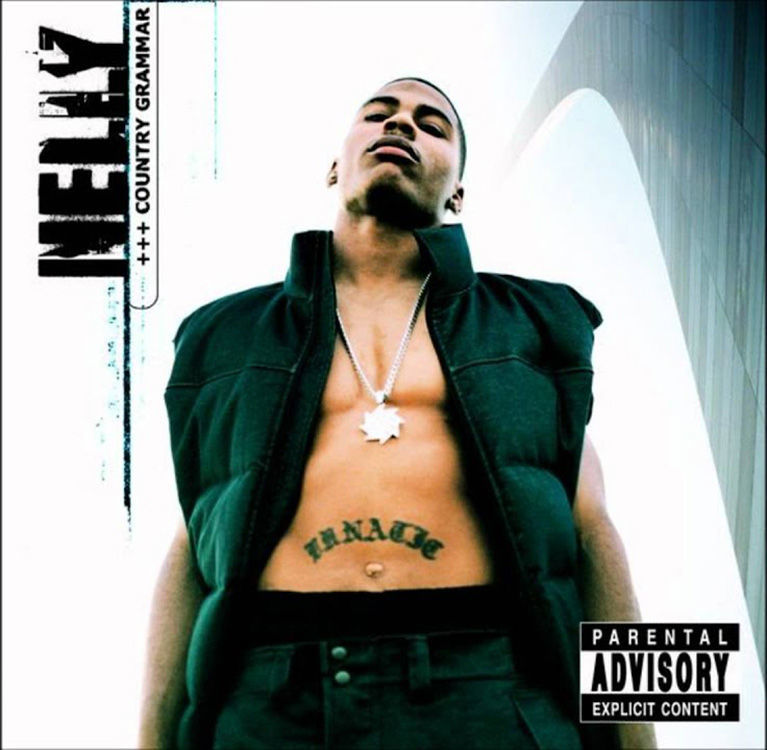