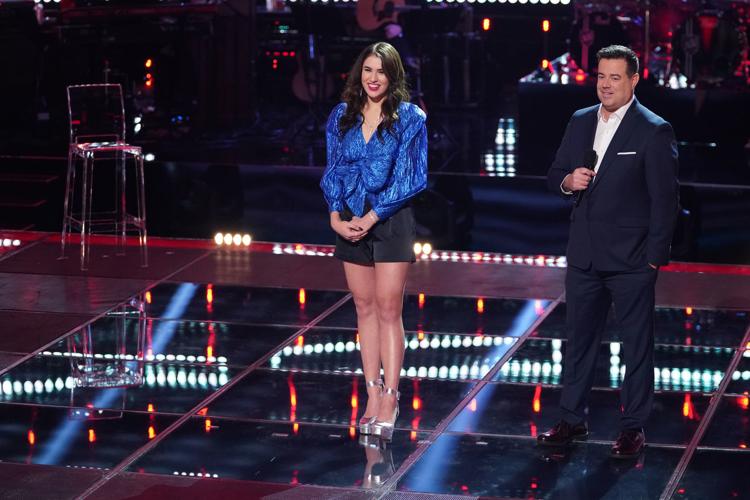 Joanna Serenko and Carson Daly on "The Voice" 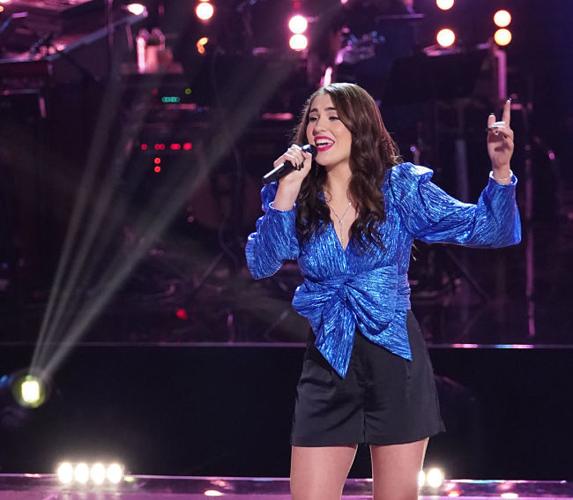 Serenko is on coach Blake Shelton’s team. She’d also been on Nick Jonas’ and then John Legend’s team, but both coaches ultimately let her go in earlier rounds of competition. Each time she was dropped, she was “stolen” by a different coach, keeping her on the show.

Serenko describes her journey so far on “The Voice” as an emotional roller coaster. She started on top, getting all four of the show’s coaches to spin their chairs around for her performance.

“But ultimately, just being on the show has gotten me far enough, giving me this platform to sing in front of America.”

As part of the Knockout rounds, the 18-year-old singer got to meet music legend James Taylor when he served as a guest mentor. Serenko calls him a hero — as a child, she once performed his song “Fire and Rain” at church — and the experience was a highlight from her time on the show.

“When I met him, I was so nervous and sweaty,” she recalls. “And he was so humble and kind and sweet. Any time a coach complimented him, he was humble and cool. It was a life-changing experience.

During the Knockouts, Serenko went up against teammate Zan Fiskum of Seattle. She performed “Angel From Montgomery” by John Prine, who died in April from COVID-19 complications. She’d selected the song in January for the Knockout rounds, which are prerecorded.

Serenko had performed the song before for a friend of a friend who had died, as well as while gigging around St. Louis.

“It sat well with my range,” she says. “I felt I could do a good job at it, and I was lucky enough to get it.”

The version of the song she did on “The Voice,” Bonnie Raitt’s interpretation, was similar to the acoustic version she’d been performing. But it obviously came with more pressure, along with a band arrangement and backing vocals. “It gave it a whole new shape and feeling,” she says.

Serenko knew competing against Fiskum could pose problems for her. “‘This might be my last time on the show,’” she thought. “I’d seen her before, and I was like, ‘OK, she’s coming for me.’ I went into it knowing my competition was fierce. I had to control my nerves. I got into my own head going in — ‘Am I good enough?’”

Getting into her own head is something she’ll need to work through before the live shows begin.

“Singing is a super-psychological game,” she says. “The moment doubt creeps in, if you question it, it can come out not the way you want it to. You have to trust your ability to do what you do and not question that.”

As Serenko watched her performance along with her family in Kirkwood, she saw the nerves. “There were certain parts I wanted to come out and be strong, but what came out was meant to come out,” she says.

Legend, Serenko’s coach, selected Fiskum as the winner of the round. Serenko didn’t expect another coach to steal her and remembers thinking that was it as she walked off the stage. But Shelton saved her at the last minute.

Shelton was the one coach she didn’t expect to end up with; her mother wanted the pairing all along. Serenko always viewed Shelton as the go-to coach for country singers, but she quickly learned “he’s a well-rounded person, and he can be for any kind of genre.”

When the live rounds begin Monday, they will look different than they usually do because of the coronavirus pandemic. April 13 on “The Tonight Show,” Shelton told host Jimmy Fallon that the singers and coaches would appear remotely from their homes.

“I have to trust everything will work out the way it’s supposed to work out,” Serenko says. “The talent producers will make it work for all of us, and it will be iconic. I’m excited.”

As Joanna Serenko advances on "The Voice," we look back at 17 St. Louisans who sang on TV competitions.

Joanna Serenko was chosen as the wild card save during the show's final seconds Monday, determined instantly by audience votes through the show's app.

The results of Monday night's performance show will be revealed Tuesday. Voting is open until 6 a.m. Tuesday on the show’s website and on the show’s app.

The decision came right down to the wire on Tuesday's broadcast when home viewers failed to vote to "save" her from elimination. Joanna Serenko was on Blake Shelton's team after having been on John Legend's team and Nick Jonas' team

“I’m actually really good," she said Wednesday, a day after being eliminated during the show's semifinals. "I’m totally fine with the outcome, and I think it’s well deserved for everybody who moved forward. I’ve gotten enough out of it to be satisfied.”

Now on John Legend's team, 'Voice' singer Joanna Serenko of Kirkwood is where she belongs

But thanks to coach John Legend’s last-second “steal,” Serenko remains in the competition and a step closer to the live shows. She jumped from Nick Jonas’ team to Legend's.

The 18-year-old singer hopes her current time on "The Voice" will further showcase the talent that comes out of St. Louis.

A look back at 18 St. Louisans on TV singing shows

Season 18 of NBC's “The Voice” will be remembered for its live rounds of competition taking place remotely during the coronavirus pandemic. An…

Joanna Serenko and Carson Daly on "The Voice"