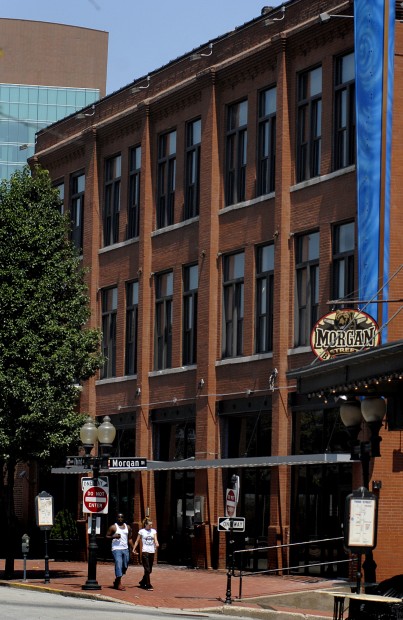 23 Aug. 2011 -- ST. LOUIS -- Vatterott College is partnering with recording artist Nelly to open a school and audio studio in the building on Laclede's Landing in St. Louis that once housed his nightclub Skybox. The building, photographed Aug. 23, 2011, is located at 800 N. Third St., St. Louis. Photo by Sid Hastings � For the Post-Dispatch 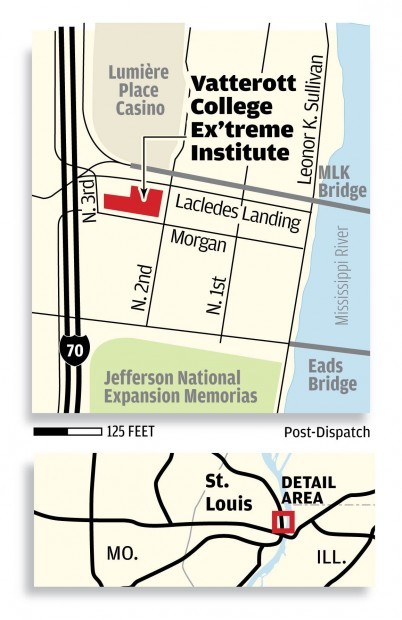 Pam Bell, Vatterott's chief executive, said Tuesday that the Vatterot College Ex'treme Institute, at 800 North Third Street, should be ready in October. It will have a recording studio, music engineering space and a graphics studio where students can produce album covers and other music-related artwork.

"Nelly and I can't wait to get this open," she said. "I think a lot of people will benefit who have an interest in music."

Bell said she and the Grammy-winning artist became friends during months of planning for a concert last Saturday to raise money for the scholarship fund at Vatterott, a for-profit vocational and career training school based in St. Louis.

Nelly's background is hip-hop, but people who want to learn to record any type of music will be welcome at Ex'treme Institute, Bell said. Students will operate studio equipment and learn to improve their skills with sophisticated recording gear now available for home use, she added.

"There are many, many people who want to have a recording studio in their own basement," she said "This will teach them how to use that equipment."

Carl Nappa, Nelly's longtime recording engineer, will serve as the executive director for the 8,700-square-foot school.

Nappa said the heart of the school will be a 1,000-square-foot studio with a "top of the line" recording console. Students who complete classes at Ex'treme will know their way around other studios and have the skill to get the best out of their home equipment, he said.

Nappa and Bell declined to say how much is being spent to open Ex'treme Institute on the building's ground floor. The school might expand to the second floor, depending on its popularity, they said.

Like people who get low-cost haircuts at a barber college, local bands will get cut-rate studio time, Nappa said.

Pros will oversee students who will operate the recording console, he said. Bands will walk out with a professional-sounding recording, Nappa added.

"They'll get just as good quality but it might take a bit longer," he said.

Nappa said that student fees and artist fees had yet to be determined but won't be "outrageous." Artists can pay as much at $1,800 daily to use a standard commercial studio.

Nelly, who grew up in University City as Cornell Haynes, burst on the national rap scene with his "Country Grammar" CD in 2000. He was among the investors, including Rams Hall of Famer Marshall Faulk and basketball standouts Larry Hughes and Darius Miles, in Skybox. The sports bar, which boasted 80 televisions, opened in early 2008 and closed about 18 months later after declining business. John Clark, president of the Laclede's Landing Redevelopment Corp., said Skybox was typical of most clubs, which have a long-term failure rate of at least 80 percent. After Skybox, two clubs quickly opened and folded in the space.

Bell said Vatterott is leasing Ex'treme Institute's space from Nelly. She added that Nelly will drop by periodically to visit students.

"He's helped with this project every step of the way," Bell said. "He will come in and see our students."

Celebrating the Marriage of Whiskey & Cigars

What Are You Wearing? A Kids Learn Class -- Arnold Branch

23 Aug. 2011 -- ST. LOUIS -- Vatterott College is partnering with recording artist Nelly to open a school and audio studio in the building on Laclede's Landing in St. Louis that once housed his nightclub Skybox. The building, photographed Aug. 23, 2011, is located at 800 N. Third St., St. Louis. Photo by Sid Hastings � For the Post-Dispatch