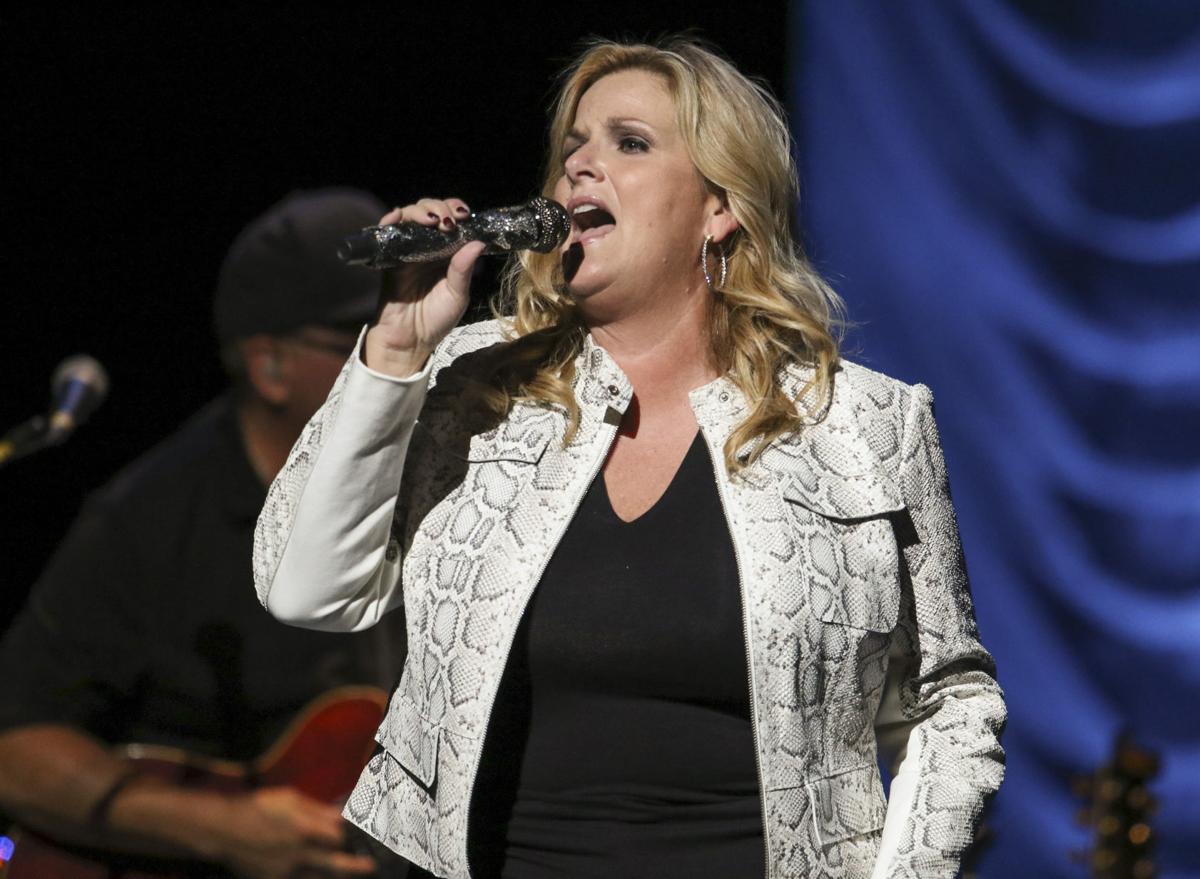 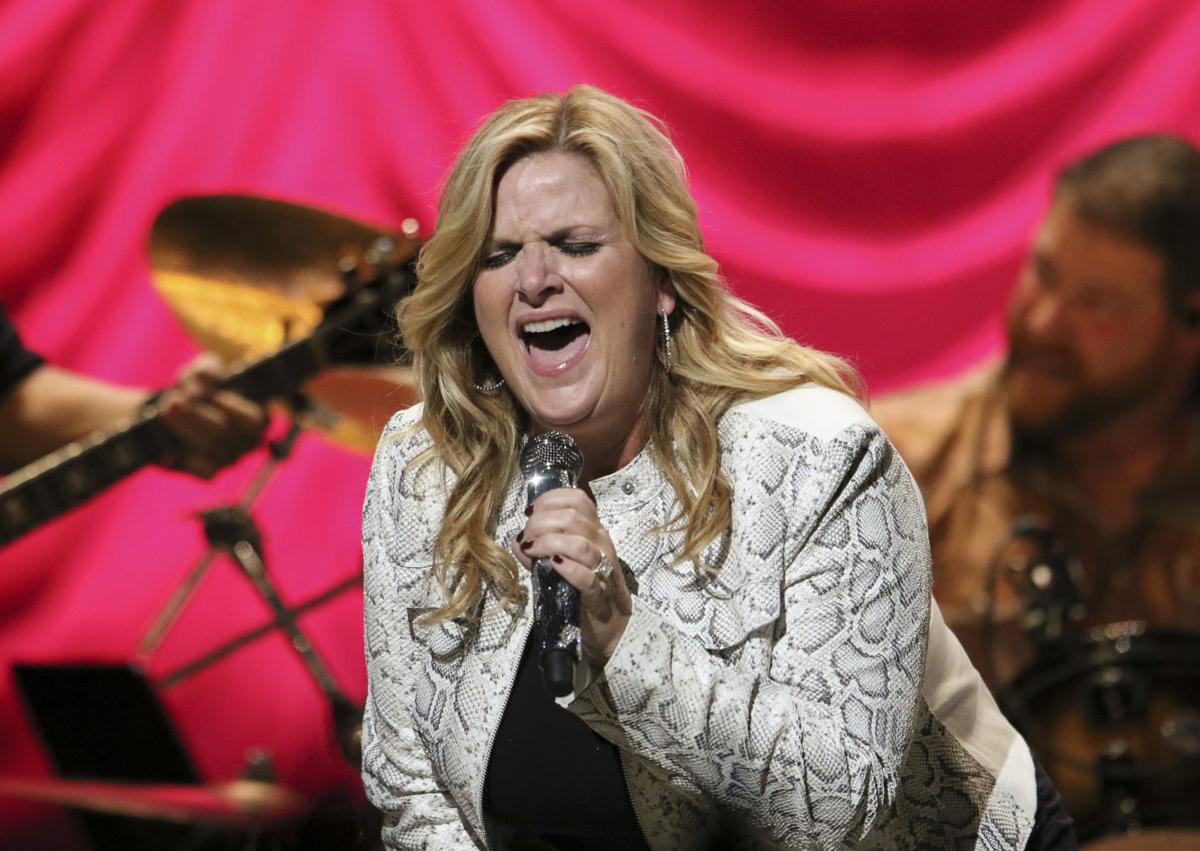 The last time Trisha Yearwood was in St. Louis, her appearance got rained out.

It wasn’t a concert, but rather Trisha’s Tailgate, an outdoorpre-show party before her husband Garth Brooks’ sold-out concert at the Dome at America’s Center. (In addition to her long, Grammy-winning singing career, Yearwood hosts a cooking show, Trisha’s Southern Kitchen, on Food Network.)

She donated the food from the event to a local charity, but during her concert Friday night at Stifel Theatre, Yearwood said that, to make up for the cancellation, she left an “ooey-gooey butter cake” underneath everyone’s seat.

She didn’t really, but the show itself was pretty sweet.

Yearwood’s first headlining tour in five years follows the August release of her album of new material, “Every Girl,” as well as a standards album, “Let’s Be Frank,” which came out in February.

The show featured songs from both new records but was mostly filled with crowd-pleasing favorites. “We want to cover the gamut of the last 28 years,” she said.

In one sense, Yearwood’s performance was a throwback to an earlier era, when country concerts didn’t compete with pop and rock shows in terms of big production values and special effects.(Her husband, who sources said was backstage, would know something about that.) Her five-piece band and three backup singers were simply set up behind her on the flat stage.

With no distracting visuals, the full focus was on Yearwood and her material, which turned out to be enough. She told stories about her songs, joked about menopausal hot flashes, acknowledged her longtime producer, Garth Fundis, as well as family members in attendance, and sang in that powerful voice which, nearly three decades on, remains undiminished.

The 95-minute performance featured a parade of hit singles, starting with an opening salvo of “Perfect Love,” “XXX’s and OOO’s,” and “Believe Me Baby (I Lied),” all of them number ones. Yearwood gave a nod to the latter song’s co-writer, Kim Richey, who had opened the show with a brief acoustic set. For “Georgia Rain,” she went one step further, calling on co-writer Karyn Rochelle — who is one of her backup singers — to step forward and take a verse.

Yearwood copped to her penchant for sad songs, but brightened things with uptempo tunes “Wrong Side of Memphis,” “Heaven, Heartache and the Power of Love” and “She’s in Love with the Boy.” Ballads show off her voice’s power, range and control, and on “The Song Remembers When,” “Walkaway Joe” and “How Do I Live,” she proved she is still the natural successor to her hero, Linda Ronstadt.

Without any effects or lighting cues programmed into the concert, Yearwood was free to call audibles and switch up the set list, doing so frequently without ever flummoxing her band or crew. She added “The Matador,” a dramatic ballad— she called it “dark and twisty” — from “Every Girl” and also performed new songs “Bible and a .44”(a heart-tugger co-written by Ashley McBryde), the glossy “Find a Way,” and her recent hit single “Every Girl in This Town.”

From the standards album, she offered a smoky, late-night take on “One for My Baby (And One More for the Road)” and closed the show with a gorgeous, sweeping “Over the Rainbow.”

After such a long time away from recording and touring, Yearwood’s recent albums and “Every Girl” tour are a welcome return. Whether it’s on TV or onstage, the veteran performer is still cookin’.

“Wrong Side of Memphis”

“The Song Remembers When”

“Heaven, Heartache and the Power of Love”

“One for My Baby (And One More for the Road)”

“Every Girl in This Town”

“She’s in Love with the Boy”

“Somewhere Over the Rainbow”

The five-man country band put together a solid show, but one top moment was a medley of some Eric Church, Tom Petty and John Michael Montgomery.

Denève makes the SLSO's New Year's Eve concert his own

Denève displayed his keen wit and won a lot of laughs from the audience.