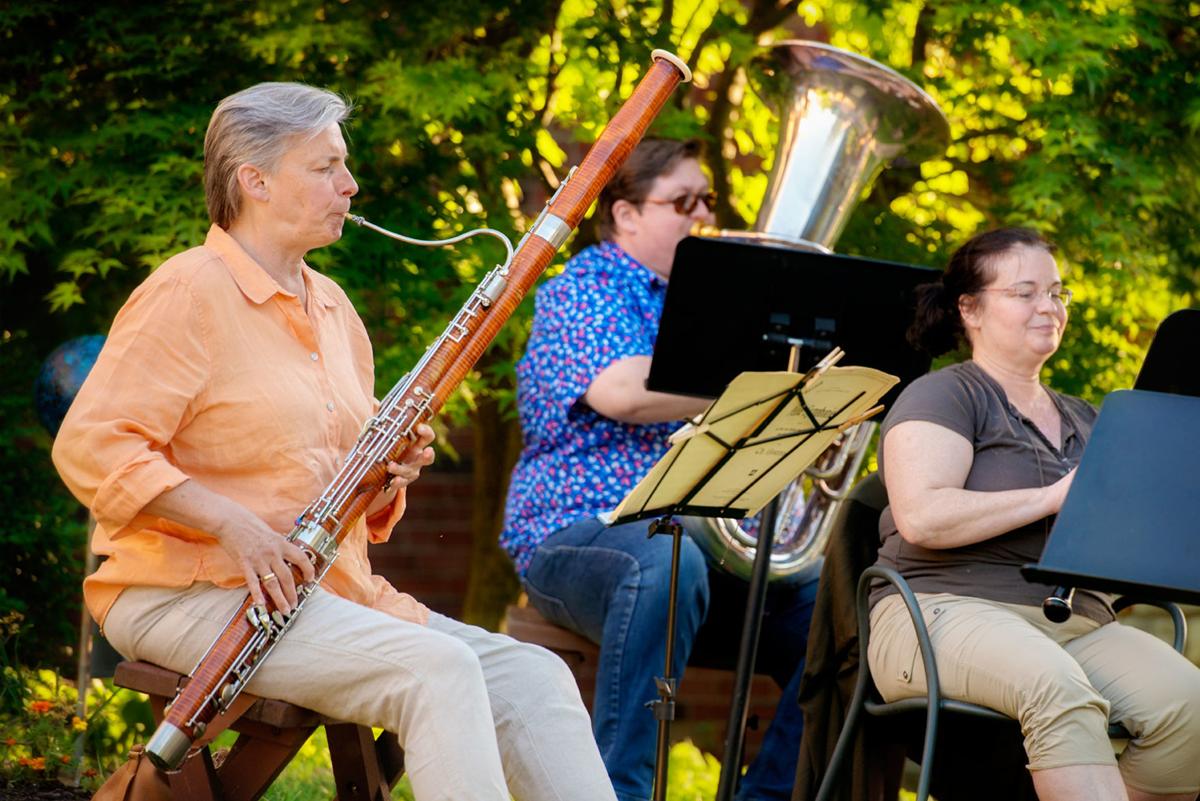 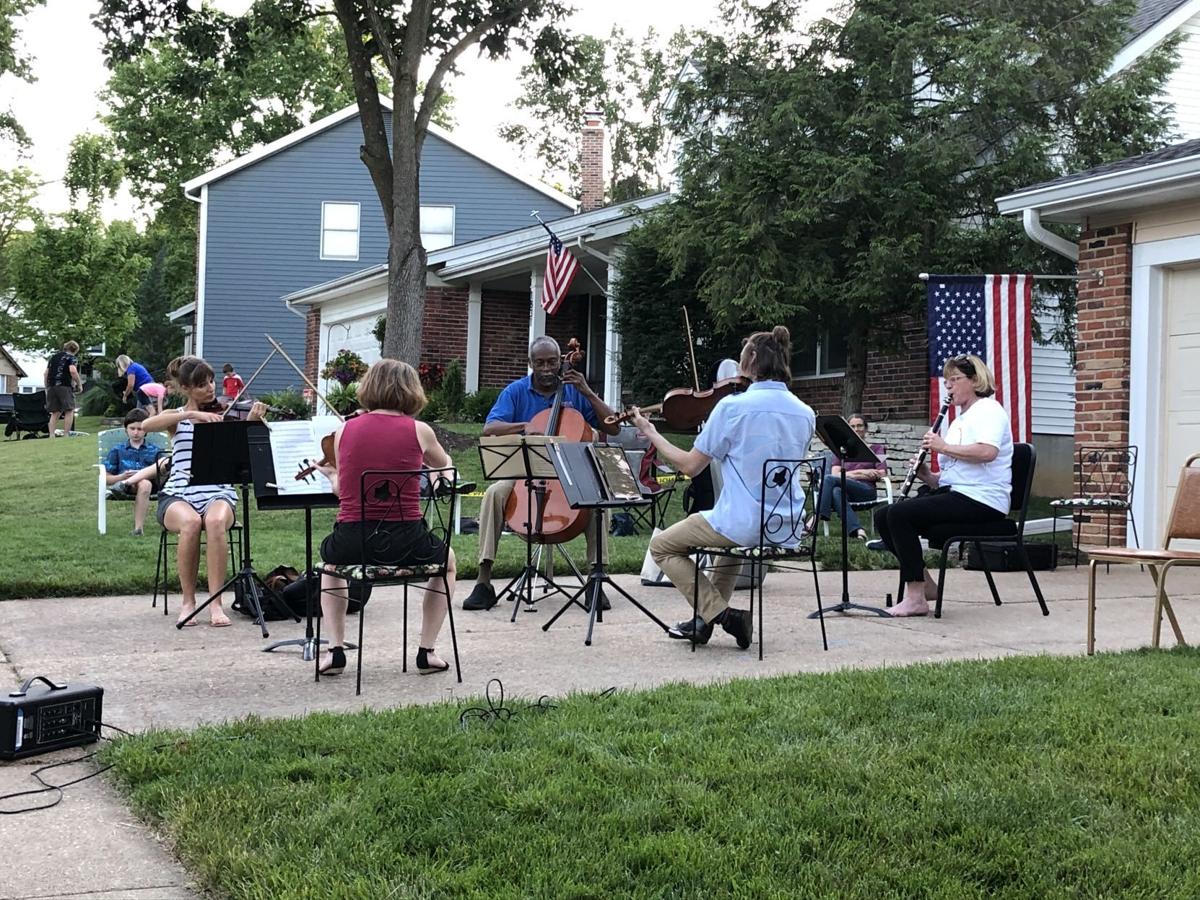 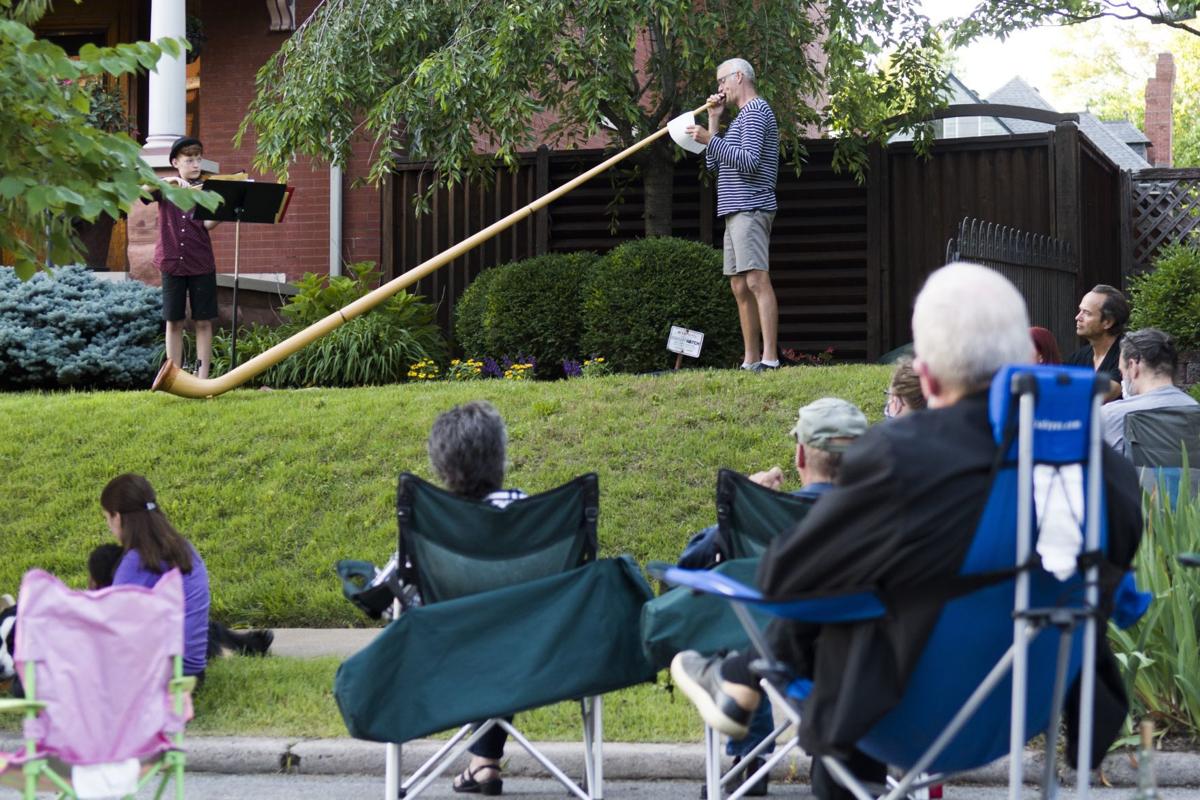 Thomas Jöstlein of the St. Louis Symphony Orchestra plays the alphorn with his son Klaus on violin to a crowd on Flad Avenue in St. Louis on June 10, 2020. 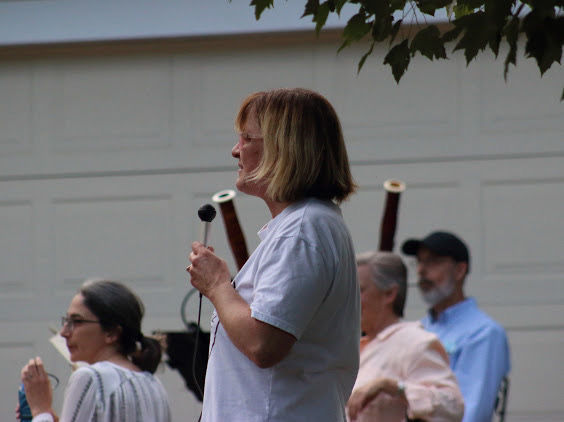 Clarinettist Diana Haskell introduces a piece at a driveway concert in West County on May 30, 2020. Photo by Paula Bernhardt

I hadn’t realized just how starved I was for live music until the concert began.

The venue was a suburban driveway in unincorporated West County. The audience — all neighbors, along with a few ringers like me — sat on chairs or blankets, scattered at socially safe distances in family groups across a half-dozen front yards. Nine instrumentalists, each at least 6 feet apart, arranged their music, then secured it with the long, clothespin-like fasteners needed when playing outside.

Concert dress was whatever they were comfortable wearing. Because of the circumstances, they hadn’t been able to rehearse together but discussed such matters as tempi and repeats right before playing them. Applause at the end of movements was explicitly acceptable. There were unintended-by-the-composers ambient additions to the music: vehicles driving past, a houndentenor obbligato from a lonely dog.

Most of the musicians were members of the St. Louis Symphony Orchestra; some perform with the SLSO as needed, and others are freelancers-around-town. All are volunteers, giving their time to perform in these concerts. They didn’t have quite the instruments called for by the composers, so others filled in: SLSO second trumpet Michael Walk took the second oboe part, using a mute throughout, while principal tuba Derek Fenstermacher impersonated a bassoonist.

And it was all quite wonderful.

The program was preceded by a promising young violinist, Klaus Jöstlein, the 13-year-old son of associate principal horn (and front-yard concert organizer extraordinaire) Thomas Jöstlein. Next came Charles Gounod’s 1885 Petite Symphonie in B-Flat major, for nine players, in four movements, followed by the Serenade No. 11 in E-Flat major, by W.A. Mozart. It’s written for pairs of clarinets, horns, bassoons and oboes; composed in five movements, the ensemble played four.

Both works were familiar to me, but the unconventional instrumentation didn’t bother me. Instead, it allowed me to hear them anew and to better appreciate the talents of the performers, a mix of SLSO members (including second bassoon/porch concert veteran Felicia Foland), freelancers, and SLSO music librarian Henry Skolnick, a bassoonist. I was particularly struck by the delicacy and subtlety of Fenstermacher’s work; I knew he was really good, but this was a side of his playing I hadn’t heard before.

Two weeks later, in that same driveway, Haskell and Jöstlein were back, this time in a pair of Mozart quintets. Once again, socially distanced, vocally enthusiastic clumps of neighbors dotted nearby yards. Playing the prelude this time was a talented 10-year-old cellist, Gergö Szilagyi, son of SLSO assistant principal second violin Eva Kozma.

Jöstlein led off the main program with Mozart’s Horn Quintet in E-flat major, unusually scored for one violin, two violas and cello, rather than the usual string quartet configuration of two violins and one cello. The second half was his Clarinet Quintet. Each featured superb, sensitive playing; both were first-class examples of how chamber music can reach people. At this one, we also sang “Happy Birthday” to a young neighbor.

Jöstlein, who has organized or taken part in almost 100 concerts in different areas, had the idea after talking to the mother of a former student; an expert in infectious diseases, she warned him not to expect to get back to Powell Hall too soon.

Instrumentalists, he noted, “have to play to stay good.” He started organizing the concerts; they include a children’s series, among other things. (He recently played an alphorn in a front-yard concert, accompanied by Klaus.) “We get the best people we can, including students. We’re trying not to be too precious about making it perfect.”

More and more musicians are giving these semi-impromptu concerts for neighbors. On her Facebook page, dramatic soprano Christine Goerke (a former young artist at Opera Theatre of St. Louis and frequent guest with the SLSO) talked about performing a 40-minute socially distant recital of songs and arias on her front porch with soprano Allison Wamser. Texts and translations were online; they were accompanied by “canned tracks, because that’s what we can do right now.”

After a three-month hiatus, she said: “I can’t tell you how much I needed to do this and how happy it made me to see people. … It was just wonderful. I missed (singing) so much.”

“I can’t tell you how much I needed to do this and how happy it made me to see people. … It was just wonderful. I missed (singing) so much.”

Performing, she added, “is possible. It just needs to be on a small scale for now — that’s fine. We took incredible precautions — that’s fine. But we don’t have to stop doing what we do. We’re going to have to adapt for a little while. We can do that, because that’s what art has done since the dawn of time.”

She urged her colleagues to “do something on a small scale. Think outside the box. I can’t begin to tell you how desperate people are for the art that connects us.”

Those connections are clear from the animated reactions at the concerts I’ve attended. “If we never go back to Powell,” said Haskell, “I will remember these concerts as some of the most fun and meaningful of my career.”

I will remember them as something akin to answered prayer, a much-needed opportunity to hear dedicated musicians sharing their art and their spirits and lifting some of the melancholy of the lockdown from mine. If things were to return to normal next week, they would still be on my list of some of the most memorable performances I’ve ever attended. In that sense, they are a gift of infinite value.

Did your St. Louis favorites make it onto this year's Go! List?

If the past few months have taught us anything, it’s this: Don’t take anything for granted — jobs, visits with friends and family, even simple…

Here's how Nelly did on his 'Dancing With the Stars' debut

Week two will see the first weekly live viewing audience vote of the season and the first elimination.

Filming Netflix's 'The Devil All the Time' was cathartic for St. Louis musician Pokey LaFarge

The St. Louis singer-songwriter plays a paraplegic musician in the movie directed by Anthony Campos.

St. Louis rapper takes a stand against police brutality with his own version of 'WAP'

Howard "Treble" Cox has gone viral with his version of the Cardi B and Megan Thee Stallion hit.

Season 29 premieres Monday on ABC with Tyra Banks as the new host.

Singer Brian Owens has long been a proponent of showing another side of Ferguson — the side that doesn’t make news for demonstrations and unrest.

"Love Is the King" will be released digitally Oct. 23 with a physical version to follow.

ACM Awards 2020: Check out the list of winners and scenes from the show

Entertainer of the year, the top ACM prize, was presented last and produced a surprise. Here's the full list of winners as well as photos from the night's festivities.

Thomas Jöstlein of the St. Louis Symphony Orchestra plays the alphorn with his son Klaus on violin to a crowd on Flad Avenue in St. Louis on June 10, 2020.

Clarinettist Diana Haskell introduces a piece at a driveway concert in West County on May 30, 2020. Photo by Paula Bernhardt