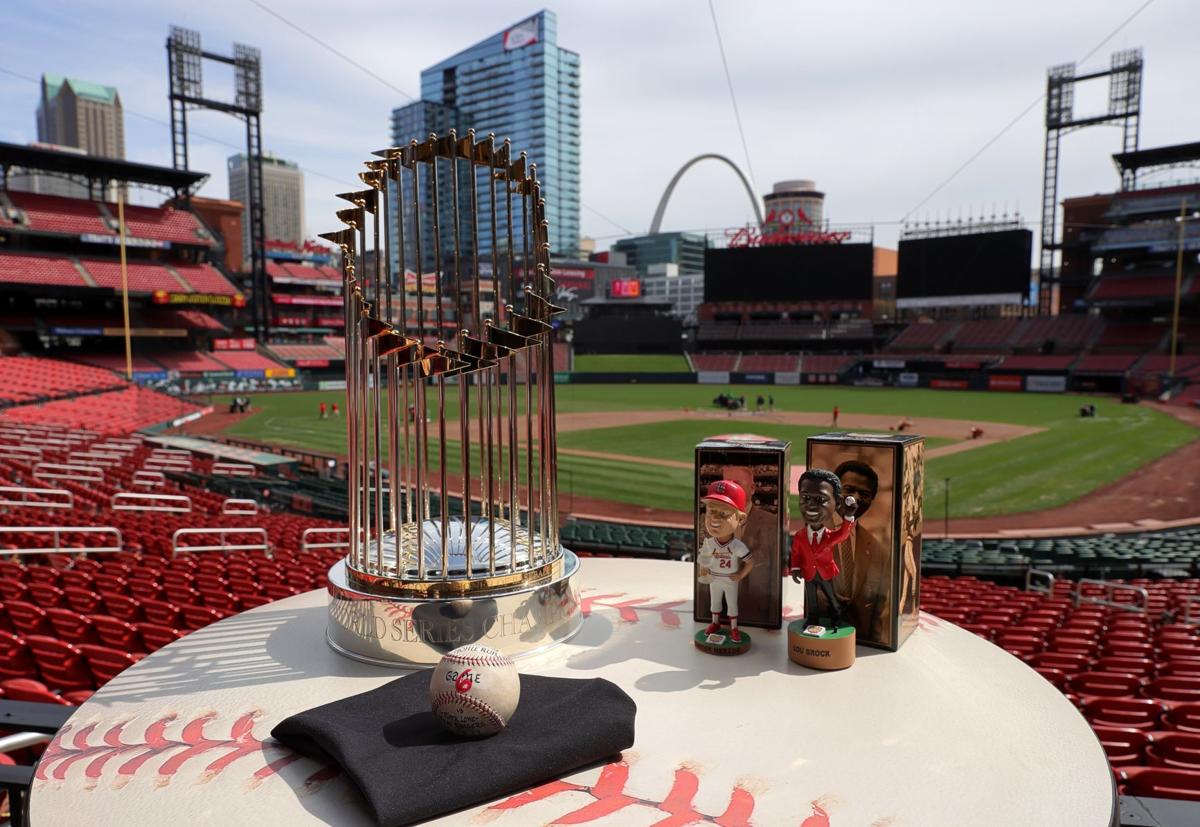 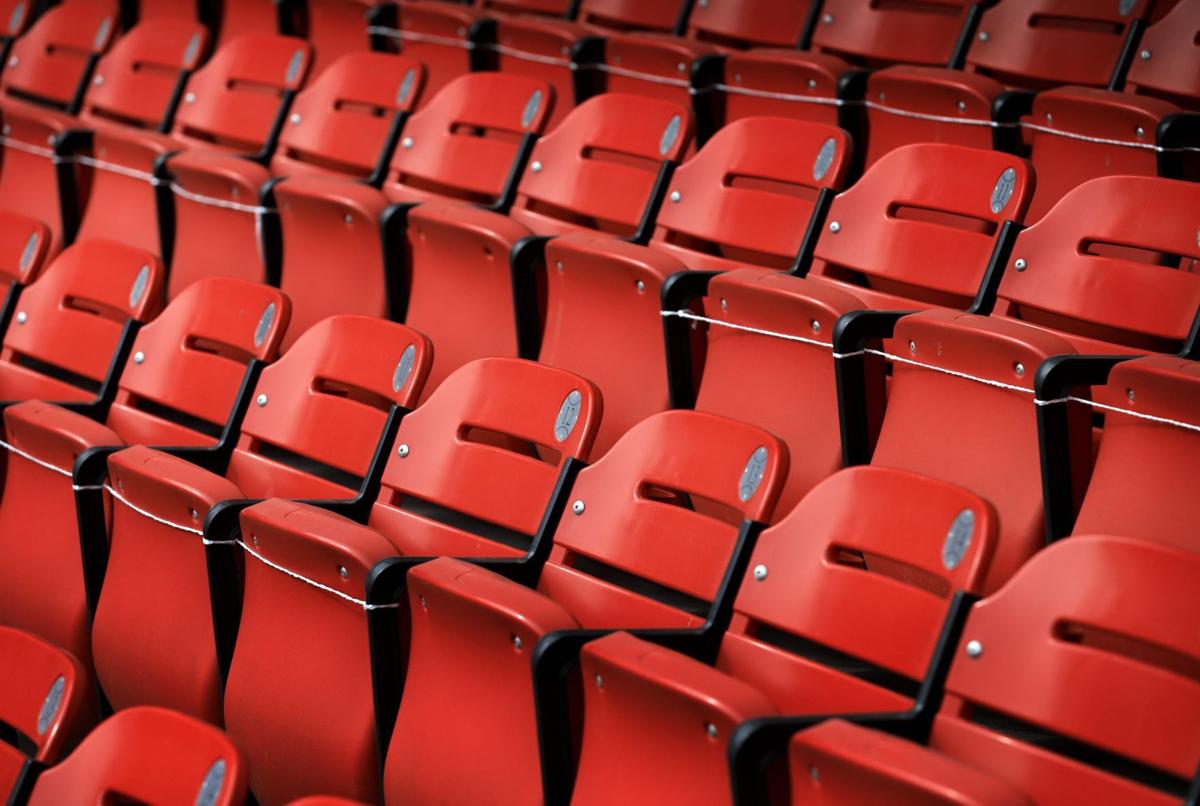 The St. Louis Cardinals are using twine to keep fans from using some seats to ensure social distancing at Busch Stadium in St. Louis seen on Wednesday, March 31, 2021. When the season opens the Cardinals will be limited to 32 percent capacity at Busch Stadium. Photo by David Carson, dcarson@post-dispatch.com 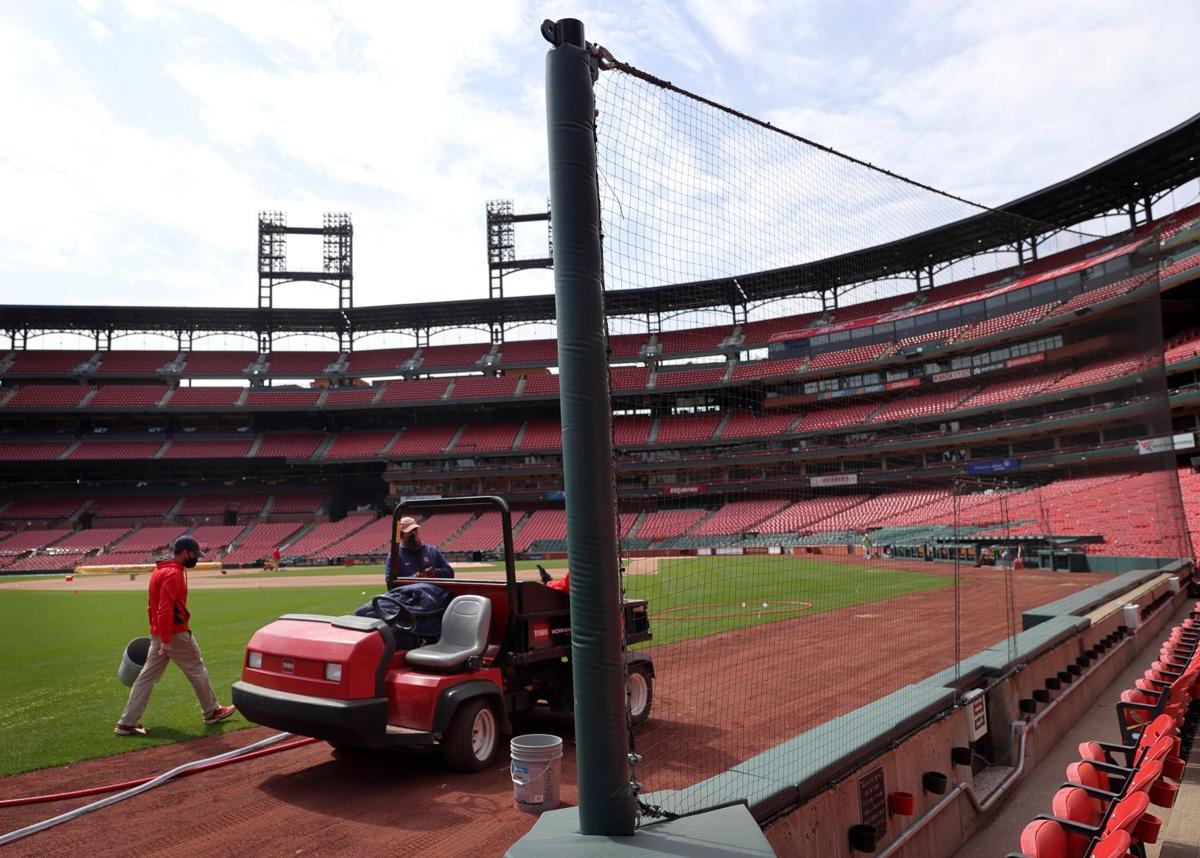 The St. Louis Cardinals installed protective netting that extends down the left and right field lines at Busch Stadium to prevent hard hit balls from entering the stands and injuring fans as seen Wednesday, March 31, 2021. Photo by David Carson, dcarson@post-dispatch.com

This season at Busch Stadium, there will be no cries of “Cold beer! Get your coooold beeeeer here!”

The stadium opens Thursday when the Cardinals host the Milwaukee Brewers; it will be the first game with fans in the stands in just over a year and a half. Many things will be the same, but some things will be different because of the COVID pandemic and the need to keep fans and staff safe.

For instance, there will be no vendors in the stands.

At least for the time being, fan attendance will be strictly limited to 32% of capacity, or about 14,500 seats. The seats are available in groups of one to four chairs, and these groups are spaced at least 6 feet away from other groups. The seats in between these groups have been roped off and cannot be used, said Matt Gifford, vice president of stadium operations.

Masks will be required to be worn at all times, except when fans are actively eating or drinking.

With tickets so limited, fans may look to buy tickets early. The home opener is sold out, though it is possible a limited number of tickets returned by the players may become available. According to Joe Strohm, vice president of ticket sales, tickets are very limited for weekend series in April and only about 1,000 seats remain for each of the weekday games.

“It’s going to be fun having fans back in the ballpark,” Strohm said.

“The players play the game, but the fans bring the energy.”

The actual tickets will be digital this year, though concessions will be made for people who do not have smartphones. The tickets will suggest the best gate for entry and will offer tips on the fastest way to the assigned seats. That way, there will be less interaction with staff and less cross-traffic with other fans, Strohm said.

It should be faster and easier to get through the gates too, Gifford said. Upgraded metal detectors that search for the type of metals specifically used in weapons mean fans will not have to empty their pockets of keys and cellphones.

However, in order to cut back on contact with staff members, no bags will be allowed in the stadium — except diaper bags and bags for other medical necessities.

This year, the stadium will not be accepting cash. Every purchase, from tickets to hot dogs to replica Yadier Molina jerseys at the stadium store, must be made with a credit card. If you don’t have a credit card, debit cards are available for sale (with cash) at one of the markets scattered throughout the stadium.

Debit cards purchased at Busch are bought at face value — there are no added fees — and can be used outside the stadium wherever credit cards are accepted.

In order to limit exposure to the coronavirus, the process of ordering food at concession stands has been changed and presumably made faster. After taking an order, the concession stand worker will flip a computer screen over to face the fan, so the fan can complete the payment process while the worker gets the food. In addition, there will be grab-and-go stands for drinks scattered throughout the stadium.

Concession-stand pricing has also changed at Busch. While the cost of tax had previously been included in the price, now it is is being charged in addition to the advertised price. To compensate for this change, the price of some items is actually a little lower than they had been two years ago, though the total cost, including tax, will now be a little higher.

With fewer people in the stands, the structure of marketing giveaways has changed, too, at least for the month of April. Instead of bobbleheads, jerseys and the like being given to 30,000 fans for each weekend game, now the swag will be handed out to the first 10,000 fans at every home game this month. The staff is still deliberating how to handle giveaways in upcoming months, Strohm said.

Across the street from the stadium, the Cardinals Hall of Fame Museum is gearing up for the 10th anniversary of the exciting 2011 team, which went from 10½ games out of a playoff spot in August to winning the World Series in October. More than 50 artifacts from that team are on display, including the extra-inning home run ball David Freese hit to win Game 6 and the World Series trophy the team picked up the next day.

Like the stadium itself, the museum is limiting its attendance. Tickets for it will include a time for entry, so it should never become crowded.

Vicki Bryant, vice president of event services and merchandising, said, “We’re trying to do everything we can to ensure the safety of our guests and make them feel comfortable coming back to the ballpark.”

Neman: Play ball! And have a hot dog

• Seats are available in groups of 1-4 only; these groups are spaced at least 6 feet from each other.

• Masks are required at all times, except when actively eating or drinking

• All tickets are digital. If you do not have a smartphone, accommodations will be made for you.

• The tickets will have suggestions for the closest gate and most direct path to your seats, to limit contact with others.

• All transactions are cashless. If you do not have a credit card, you can purchase a debit card (for cash) at the markets scattered throughout the stadium. The card has no fees and can be used outside the stadium, too.

• Concession stands will be cashless and, when possible, touchless. Fans will have to complete their own credit card transactions.

• Tax will no longer be included in the advertised prices at the concession stands.

It was the great 20th-century philosopher Charlie Brown who put it best: “A hot dog just doesn’t taste right without a ballgame in front of it.”

Grumble about the prices if you must — Matt Carpenter’s $18.5 million salary isn’t going to pay itself — but there is nothing like the food that you eat at a ballpark.

Hamburgers are beefier, french fries are tastier and beer is colder at Busch Stadium.

If 2020 taught us anything, it was that although we could live without seeing a baseball game in person, life is better when you can be there.

Here’s to pretzels and popcorn and ice cream, all enjoyed — as they should be — in front of one of life’s grandest spectacles. By Daniel Neman

Nate Green, St. Louis Cardinals director of hospitality, talks about some of the new food options available to fans at Ballpark Village includ…

The St. Louis Cardinals are using twine to keep fans from using some seats to ensure social distancing at Busch Stadium in St. Louis seen on Wednesday, March 31, 2021. When the season opens the Cardinals will be limited to 32 percent capacity at Busch Stadium. Photo by David Carson, dcarson@post-dispatch.com

The St. Louis Cardinals installed protective netting that extends down the left and right field lines at Busch Stadium to prevent hard hit balls from entering the stands and injuring fans as seen Wednesday, March 31, 2021. Photo by David Carson, dcarson@post-dispatch.com