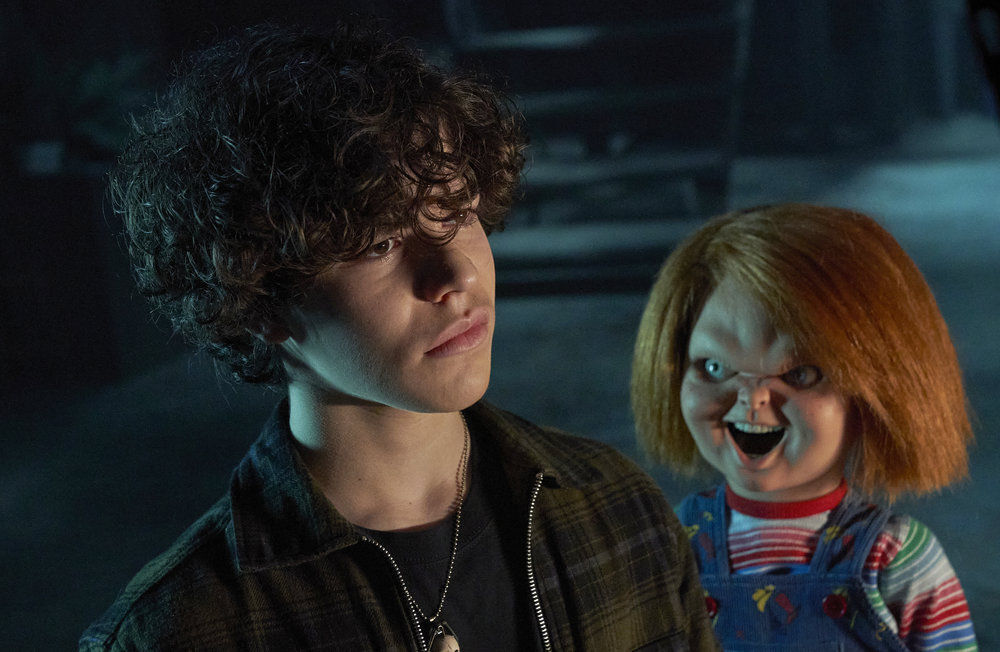 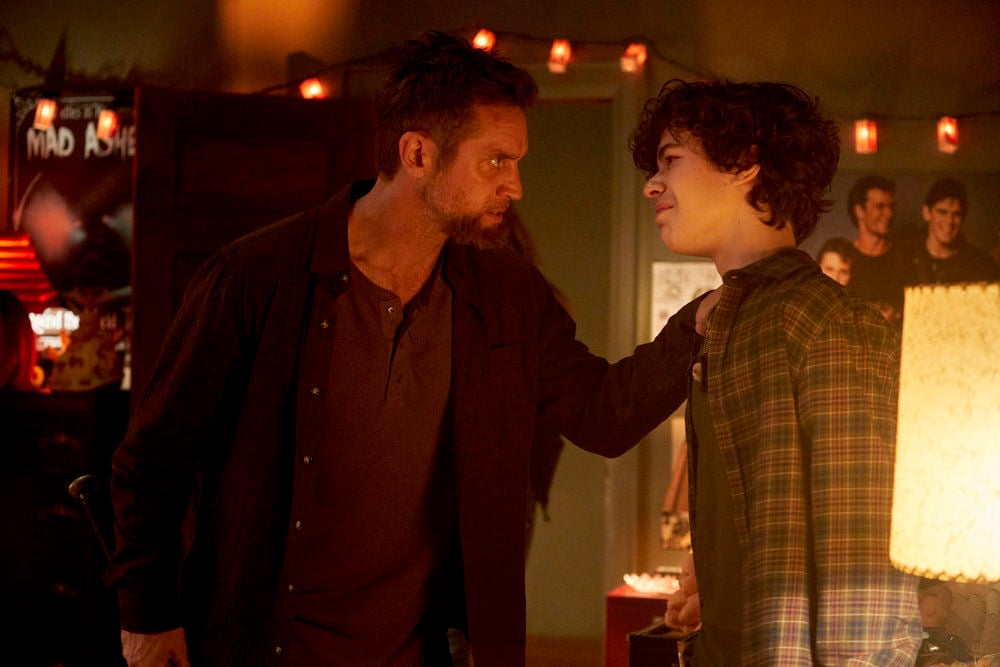 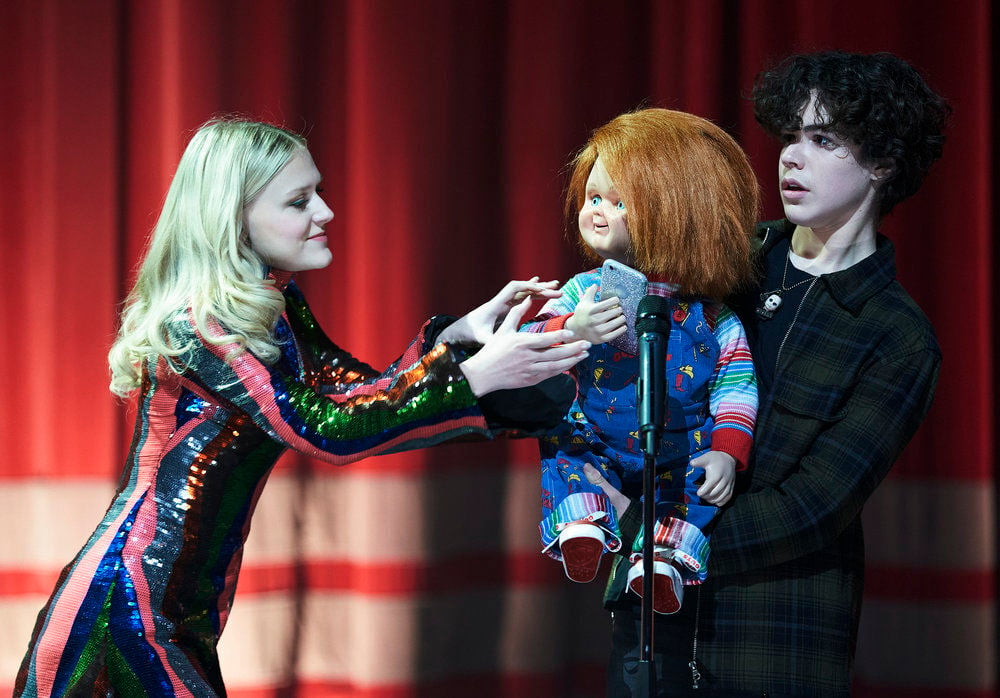 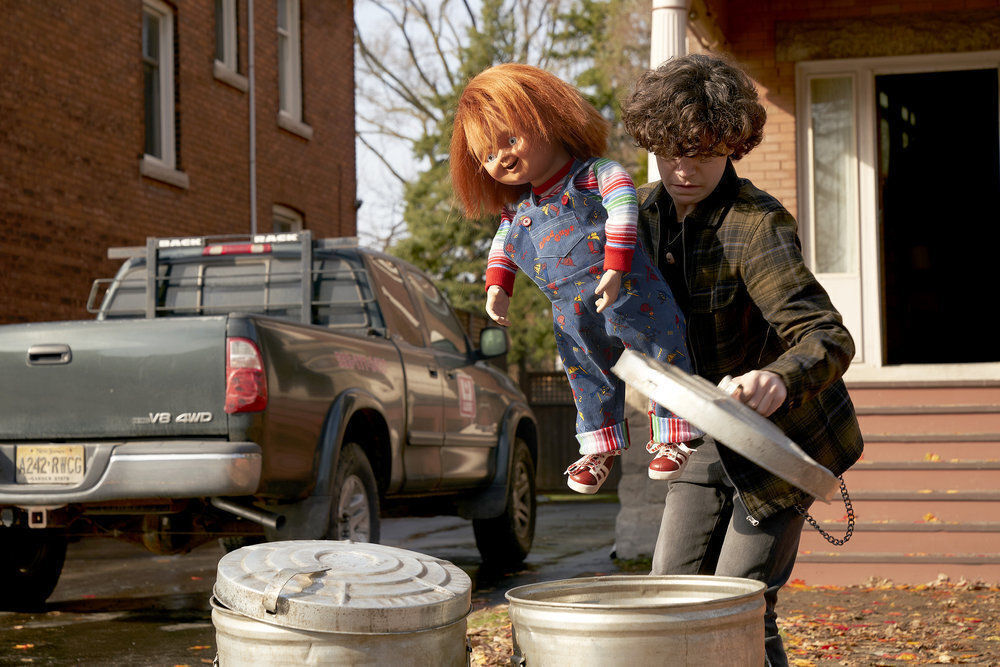 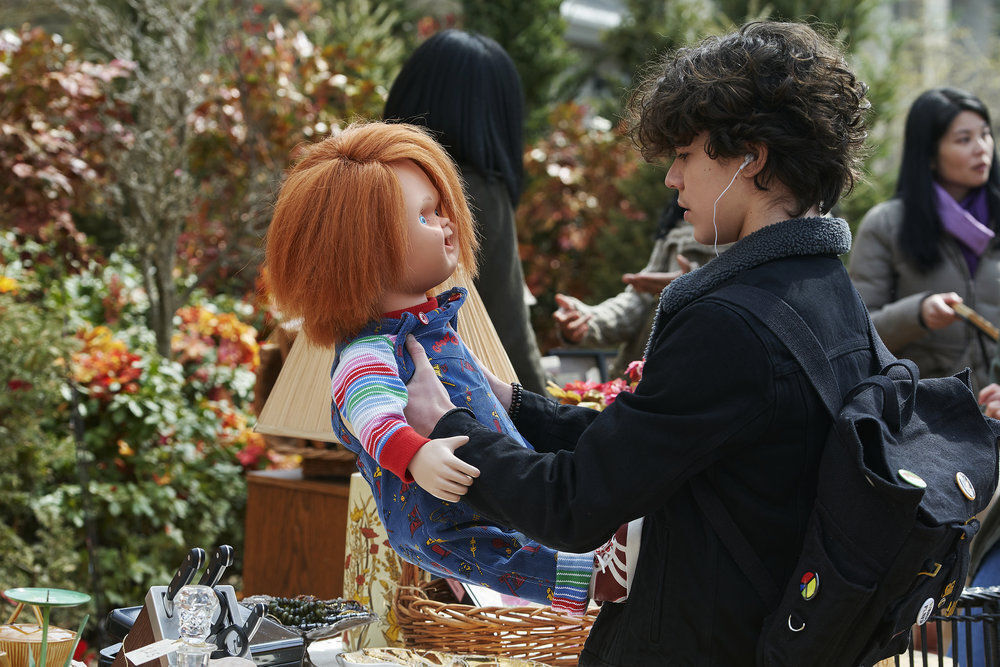 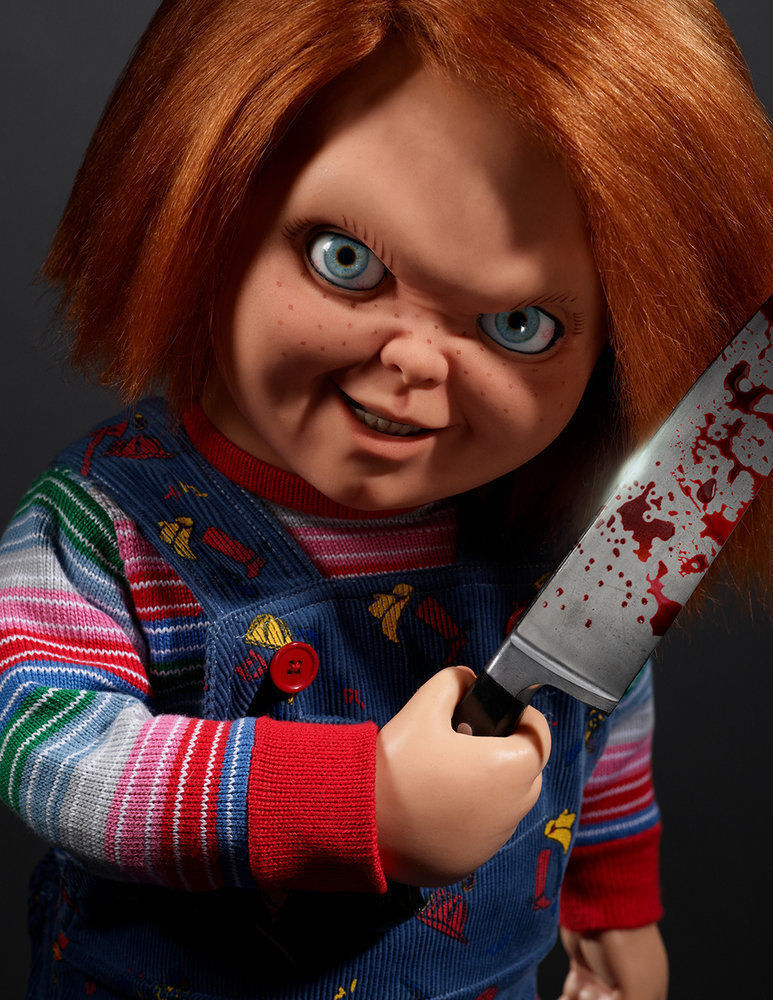 “Remember when they came out with New Coke, and everybody liked Coke Classic better?” actress Jennifer Tilly says. “This is a similar thing. People love the original Chucky with the voice of Brad Dourif.”

To please the haunted doll’s devotees, Syfy has created “Chucky,” a limited series that reunites Tilly’s Tiffany with Dourif’s Chucky. The 10-part offering — which examines the character’s origins — was in the works “long before the remake,” she says. “It did throw a crimp in things because we were kind of like, ‘Where do we belong in the Chucky universe?’”

The answer: wherever it wants to be.

Produced by Don Mancini, the writer of all the films except the reboot, “Chucky” gives the faithful some answers they’ve been seeking — and a teen romance.

For Zackary Arthur, the teen who plays Jake Wheeler in the series, it’s an opportunity to be one of the “cool” kids.

“When I was growing up, my parents didn’t want me watching gory stuff,” he says. “The kids who watched the Chucky movies were the cool kids. And I was like, ‘Man, I wish I was like that.’”

Devon Sawa, who plays twins in the new series, grew up with the movies. “When (‘Chucky’) came across my desk to audition for, it was a no-brainer,” he says. “Chucky’s a legend. Brad is a legend. Chucky belongs on the Mount Rushmore of horror with (Freddy) Krueger and Jason (Voorhees).”

Tilly, who has been in four “Chucky” films and the series, says dying isn’t a problem for characters in the franchise. Tiffany, the character she plays, “dies in every single movie, and she just keeps coming back. Chucky does, too.”

Adds Mancini: “We also have a habit of bringing actors back in different roles from movie to movie. So, even if someone dies, they can come back in another role.”

In “Curse of Chucky,” fans got to see an adult version of Andy Barclay, the first person to receive a possessed Chucky doll as a gift. When they were looking for someone to play the role, producers cast Alex Vincent, the original Andy, in the role.

“Fans went crazy when they saw Alex show up on screen,” Tilly says. “That’s why I think Chucky’s had a loyal fan base for 30 years. People see them as real characters … even the Chucky doll.”

When Dourif was hired to provide Chucky’s voice, he toyed with several versions.

“Chucky was from Chicago, so I had a Chicago rasp,” he says. “Now, he’s, oddly, kind of moving more toward New Jersey.”

To get the right sounds, he listens to “Cult of Chucky” and mimics the voice. “And then Don schools me.”

In the new series, Dourif’s daughter, Fiona Dourif, returns as Nica Pierce, a character she introduced in “Curse of Chucky.”

“When she was very young, she came to the studio while I was (recording), and it was during the time when I was being burned to death,” Dourif says. “I was screaming in agony. She heard this and went white as a sheet and ran out of the studio. We had to stop, and I had to go find her and tell her that I was OK and that it would be fine. So she had her first kind of traumatic experience around me doing Chucky pretty young.”

Now, she’s part of the legend.

A horror icon who has lasted decades? “You never think that,” Dourif says. “You take it really just one movie at a time. I know there were some really good ideas that never got shot.”

When he visited his daughter in school, classmates wanted him to do the voice. “They wanted me to do the laugh,” he says. So even before she became a member of the Chucky family, the doll with the killer instinct “was definitely a part of her life.”

What “Chucky” • When 9 p.m. Tuesdays • Where Syfy • More info syfy.com/chucky

“Child’s Play” (1988) • A serial killer skilled in voodoo (Brad Dourif) transfers his soul into a child-sized doll. The doll is sold to a mom who gives it to her son, Andy, and soon is offing people in all sorts of ways.

“Child’s Play 2” (1990) • Two years later, Andy is in foster care. The company that made the original doll tries to clear its name, but the spirit of Chucky still exists, and the doll starts to take on traits of a human. The doll’s goal? To swap bodies with Andy. Andy turns on him, however, and tries to drop him in a vat of plastic. When that doesn’t work, Andy’s foster sister shoves an air hose into the doll’s head and explodes it.

“Child’s Play 3” (1991) • Eight years after the second film, the factory has reopened, and Andy is in military school. Chucky — the not-dead Chucky — finds another boy to possess named Tyler.

“Bride of Chucky” (1998) • The serial killer’s girlfriend, Tiffany, acquires Chucky’s remains, stitches them together and revives Charles Lee Ray. Chucky then kills her and transfers her soul into a bride doll, and the two haunt a young couple. The Tiffany doll gives birth, and the killing continues.

“Seed of Chucky” (2004) • Chucky and Tiffany’s child, Glen, brings his parents back to life, and they force a pregnancy onto actress Jennifer Tilly. Glen dismembers his dad; Tiffany takes over Tilly’s body and Tilly gives birth to twins, each with one of Glen’s personalities.

“Curse of Chucky” (2013) • Chucky is sent to the home of Nica and Sarah Pierce. He kills family members, largely because Sarah was the one who turned in Charles Lee Ray. This leads to more mayhem until he is sent to Andy Barclay, the kid from the first film who points a shotgun at Chucky and (spoiler alert) once again kills him.

“Cult of Chucky” (2017) • As you discover, nothing stops Chucky. Even though he was shot in the head, he’s still alive. He goes to mental institution (with a new head, no less) and kills at random. To thwart Chucky, Andy gets himself admitted to the institution. Sadly, Nica becomes possessed by Chucky.

“Child’s Play” (2019 reboot) • This reimagines Chucky as a high-tech toy that becomes violent after an employee disables his safety features. Andy (13, again) gets the rogue doll that identifies so closely with him that he kills folks Andy dislikes. To stop the doll, Andy has to take charge.

Peter Scolari, who starred with Tom Hanks on TV's "Bosom Buddies," died Friday at 66. He had cancer and had been ill for two years, his manager said.

TV Q&A: What was the James Bond movie with the best song ever?

With questions and answers about "The Wendy Williams Show," "Law & Order" and Johnny Depp.

WWE’s Drew McIntyre talks St. Louis fans, wielding a sword at the Dome, and his ‘A Star Is Born’ moment

WWE Superstar Drew McIntyre is hopeful he’ll get a second shot at a Championship run in front of fans at January's Royal Rumble in St. Louis.

If she was going to come back to the “Star Trek” universe, Kate Mulgrew is glad it’s as a hologram.

The two also reminisce about 'Xena: Warrior Princess' and its impact 20 years later.