Bob Saget was 30 years old when he gave his first hug as Danny Tanner, the clean-freak, embrace-prone widower raising three daughters with his best friend and brother-in-law in ABC’s “Full House.” He’d give roughly 10 trillion more from 1987 until the show’s end in 1994.

Though there were plenty of beloved TV dads before him, and plenty since, it’s hard to overestimate how Saget’s displays of affection on “Full House,” beamed into the living rooms of millions of homes, soothed a generation of young viewers — even the cool ones who mocked the corniness.

“I didn’t know I was being called the biggest geek in the world while it was happening or that I would be revered as the guy who loved hugging,” Saget, who died Jan. 9 at age 65, told the Los Angeles Times in 2016. “I came up with that. I made him a hugger. That was one of my contributions.”

I spoke with Saget a couple of weeks before “Fuller House,” the sequel to the beloved family sitcom, was set to make its debut on Netflix, and he couldn’t have sounded happier about reprising the straitlaced, warm-hearted character who followed him throughout his career.

“There were a lot of chills going on through the whole thing, just as you would expect,” he said. “I don’t have that much hair on the back of my neck, but whatever hair I do have left stood up.”

After graduating from Philadelphia’s Temple University, where he studied film and already showed an interest in pursuing comedy, Saget moved to Los Angeles. He found the Comedy Store, where he developed his sharp, at times risque style of humor, and had bit parts in TV and film, including ABC’s “Bosom Buddies” and a 1987 Richard Pryor film, “Critical Condition,” before he landed what would become his most memorable role on “Full House.”

The character was a decent and active father who wore cable-knit sweaters and pleated khakis. He assured his daughters “Everything’s going to work out super great” and deep-cleaned for fun. And who could forget the hugging? It began three minutes into the pilot episode — a goodbye for Danny’s mom, who was ending her stay helping her son with his daughters.

“I was having kids the whole time it started — my oldest daughter is a year younger than Ashley and Mary-Kate (Olsen),” Saget said, reflecting on that era of his life. “It was a place where everyone was always trying to make it better, including the cast. I realized I was kind of the Rich Cunningham on the show. I was the straight guy. I wasn’t the acerbic guy, which wouldn’t have worked. I was the pure guy. And when I do comedy, people are like, why aren’t you Danny Tanner? It’s like, do you want Anthony Hopkins to eat people? I was acting, guys!

“It was a job and I was damn lucky to get it,” he continued, “and really excited to get it, because I had gotten fired from a CBS job. I knew (‘Full House’ creator) Jeff Franklin because I used to do the warm-up on ‘Bosom Buddies’ and Jeff was a writer on ‘Bosom Buddies,’ and one time they put me on the show and it was a big deal for me. I worked a long time with no jobs. I tested for it to make sure I was the right choice. And everyone knows that there was another actor (who was cast in the role originally), which I always feel bad (about). But bottom line is, we did something that was magical in a Disneyland way. It had that element, and it still does have that element.”

Saget’s appreciation for the role that brought him fame didn’t always come easy. His edge would be obscured by the wholesome image that came from playing Danny Tanner and hosting ABC’s family-friendly clip show, “America’s Funniest Home Videos.”

“With my stand-up comedy, there’s no way to avoid the fact that I did this and I’m proud of it (now),” he said. “My complaining only came from being a 30-year-old guy who has Jewish neurosis and was doing two shows that were very popular and very G-rated. I’m glad there wasn’t Twitter back then because there would be many people to block.”

Saget described returning to the character decades later as a special, albeit surreal, experience. He found it humorous that he and the other adults from the original were now referred to as the “legacy cast” as the promotion machine kicked into gear: “It sounds like we were inside an alien spaceship, like Sigourney Weaver. After a thousand years of space travel, the spaceship opened up and smoke came out and here we are: We are the legacy cast. There is an aged feeling to it. And I am the oldest member of the cast — though not mentally.”

He even went to the series’ original soundstage for inspiration. “Stepping foot back on that set was very personal for me,” he recalled.

“They say you can never come home again, but we got to. Then I walked onto Stage 26, where the set for the new show is, and I was alone. I just stood there. They rebuilt the freaking kitchen. They rebuilt the freaking living room. I’m like, ‘Wait a second, is that the right couch?’ and then they made sure they had the right couch. They saved the fabric from 25 years ago of the original couch. It’s a beautiful, wild thing to have walked onto the set. ... I walked into this house that was a part of my life. There were times when I spent more time on set than I did at home.”

At the time of our 2016 interview, Saget already understood that his work on “Full House” had stood the test of time, and he hoped that it would continue through “Fuller House” and beyond.

“It was part of a culture — part of a generation,” he said. “There’s a lot of the anecdotes we’ve heard through the years: ‘You helped raise me’ or ‘I would watch this with my mother or my father.’ I think that the show made a heartfelt impact on people — that’s why it’s exciting for people for it to come back. I pay homage to it in everything I do because it put me on the map. ... In 30 years we’ll talk again when I come back to it at 90 years old. I’ll be like Captain Pike in ‘Star Trek.’ I don’t know what it will be — it’ll be the three boys on the show coming back as older men. It’ll be ‘Fullest House.’ People from other planets will enjoy this show.” 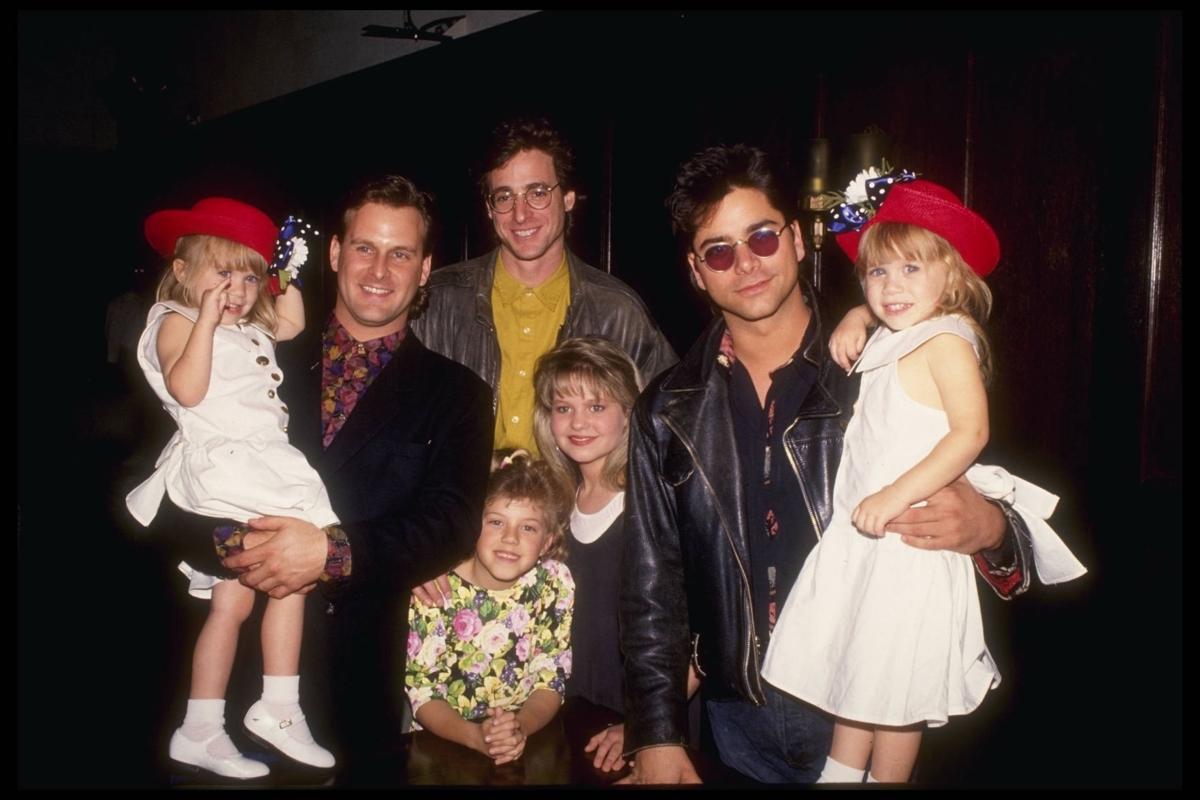 FILE - Bob Saget, from left, Dave Coulier and John Stamos, winners of the award for favorite premium comedy series for "Fuller House," pose in the press room at the People's Choice Awards at the Microsoft Theater on Wednesday, Jan. 18, 2017, in Los Angeles. Saget, a comedian and actor known for his role as a widower raising a trio of daughters in the sitcom “Full House,” has died, according to authorities in Florida, Sunday, Jan. 9, 2022. He was 65. (Photo by Jordan Strauss/Invision/AP, File)

FILE - Bob Saget arrives at the premiere of "Jackass Presents Bad Grandpa" at the TCL Chinese Theatre on Wednesday, Oct. 23, 2013, in Los Angeles. Saget, a comedian and actor known for his role as a widower raising a trio of daughters in the sitcom “Full House,” has died, according to authorities in Florida, Sunday, Jan. 9, 2022. He was 65. (Photo by Richard Shotwell/Invision/AP, File)