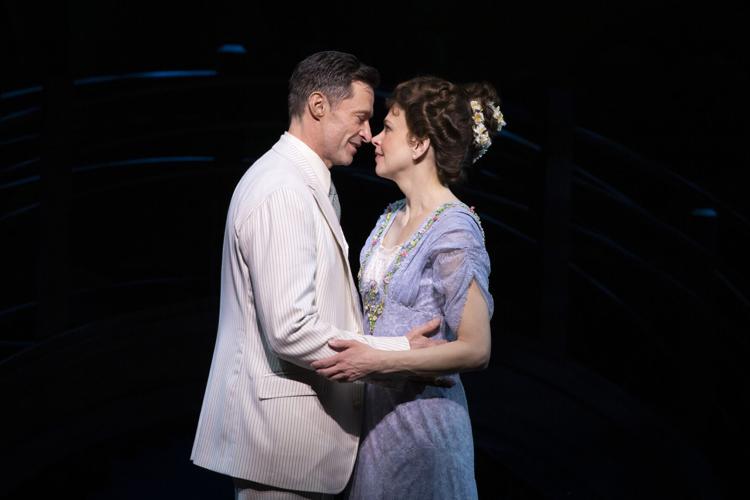 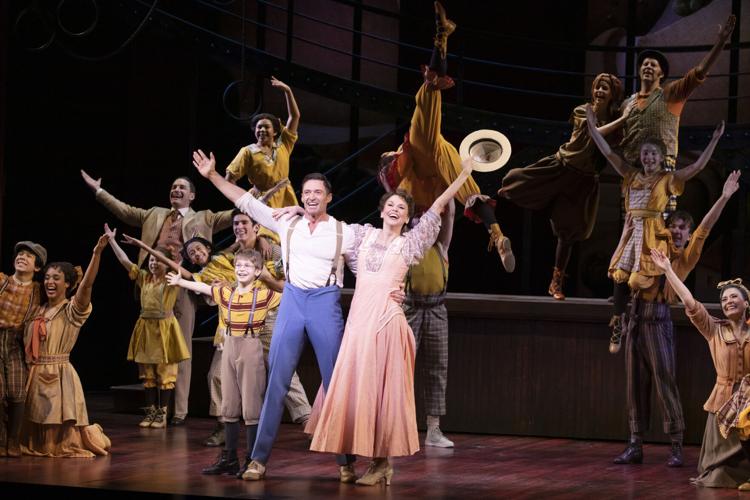 Hugh Jackman and Sutton Foster star as Harold Hill and Marian Paroo in the Broadway revival of "The Music Man."

NEW YORK -- There are more people on stage in “The Music Man” than there are in some Iowa towns.

The Broadway revival is as charming as anything on stage in three years and, yes, Hugh Jackman is largely the reason why. Willing to do just about anything – with a smile – he pushes and prods the Meredith Willson musical like a 4-H member at the state fair livestock show. When those hummable songs – “Trouble,” “Seventy-six Trombones,” “Marian the Librarian” and “Wells Fargo Wagon” -- turn up, they’re reason for Warren Carlyle’s athletic choreography to kick into high gear. Everyone becomes part of huge production numbers that, likely, will not be duplicated outside the Winter Garden Theatre.

But just as Jackman charms the Iowans, Marian Paroo (Sutton Foster) begins raising flags of concern – ones that suggest he’s just trying to talk them out of money; he has no interest in starting a boys band. The new goal? Win her over and get out of town.

While director Jerry Zaks has this play out on a Grant Wood-inspired set, he has taken liberties with the script and changed scenes that could have shown how backwards the residents were and how Hill enlightened them. A second act opener (which used to be a Native American dance) is now Washington crossing the Delaware and it falls flat. Luckily, Eulalie Mackecknie Shinn (Jayne Houdyshell) can get laughs just by shooting someone a look. She reserves the best for her husband, the Mayor (Jefferson Mays), and, like the others, she’s utterly charmed by Hill.

That means he just has to win over the unyielding Marian. While Jackman dances up a storm, he plays most of his scenes close to the Robert Preston vest. It’s Foster who branches out by giving audiences a Marian who has plenty of reason to stand firm. She’s quite funny, too, and when she finally lets the façade fall (thanks to her brother’s enthusiasm for a shiny cornet), she can match him step for step in every one of the remaining dance numbers.

Foster is particularly good when she and Jackman have something of a tap-off at the end of the show. Still, they’re constantly challenged by that incredible ensemble. It executes such dazzling moves, “Music Man” could make outsiders think Iowans are much more nimble than they let on.

An old-fashioned valentine to musicals that paved the way for today’s status-quo challengers, “Music Man” is a big, big deal made even better by stars who definitely know the territory. It’s the best investment a theatergoer could make.

Before the #TonyAwards on Sunday, read through some of critic Bruce Miller's recent reviews and stories about shows currently running on Broadway.

Hugh Jackman and Sutton Foster star as Harold Hill and Marian Paroo in the Broadway revival of "The Music Man."