At Home with Amy Sedaris (10/9c, truTV): Giggle alert! The wackiest playhouse since Pee-wee Herman's heyday reopens with the third-season premiere of Amy Sedaris's delightfully deranged spoof of homespun lifestyle TV. Her first topic: "Babies," setting the tone with Amy's warped lullaby to an unseen infant, with a second lyric that goes something like, "Lipstick on the collar, Men all lie; Come into this world alone, And that's how you die." From there, she welcomes guests including Laura Benanti (with a "From Here to Maternity" line of mom-to-be clothes) and Jane Krakowski (overseeing a crafts demonstration for rusty-nail wind chimes). Campy? Yes, to an almost disquieting degree.

The Masked Singer (8/7c, Fox): The third season of the flamboyant singing competition ends, with the final three being unmasked as they compete for the "Golden Mask" trophy. Somehow, Fox resists the urge to stretch this nonsense out to two hours. Perhaps to make room for the extreme competition that follows: Ultimate Tag (9/8c), an American Gladiators-style race through an elaborate obstacle course, with contestants trying to elude "pro taggers" with names like Banshee, Beach Boy, The Boss, Caveman, Flame, The Flow and… The Geek (a free-runner). JJ Watt hosts with NFL bros TJ and Derek.

Who Are the 'The Masked Singer' Season 3 Contestants? Best Guesses & Reveals So Far

Find out who has been unmasked this season and sound off with your best predictions for those left.

Moana (8/7c, ABC): There are worse ways for networks to keep the lights on during the pandemic shutdown than plucking popular titles from their parent company's movie vaults. It's working on Sundays for CBS (with Paramount hits), and now ABC establishes Wednesdays as a "Wonderful World of Disney" movie night for the next four weeks, starting with the exotic Oscar-nominated 2016 animated film. Auli'i Cravalho (ABC's recent The Little Mermaid special) voices the title character, who sails off on an epic sea adventure where she encounters the demigod Maui (Dwayne Johnson). The judge hints at a finale that brought on plenty of 'watery eyes and goose bumps.'

Ben Platt: Live from Radio City Music Hall (streaming on Netflix): Famous from his Tony-winning performance in Dear Evan Hansen, more recently a TV star in Ryan Murphy's The Politician (returning on Netflix for a second season June 19), the singing actor plays to his strengths in a feature-length concert special filmed at New York City's grandest show palace. It was the final stop on his tour promoting his debut album, Sing to Me Instead. 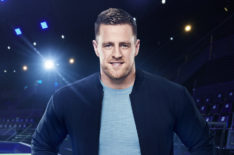 The Houston Texans player hosts the Fox competition with brothers TJ and Derek, both Pittsburgh Steelers.

Also streaming on Netflix: the six-episode first season of Blood & Water, from South Africa and filmed in Cape Town. Ama Qamata stars as 17-year-old Khumalo, who transfers to the elite inner-city Parkhurst College on a secret mission to follow the trail of an older sister she never met because she was abducted at birth. Find out when Payton and his powerful posse will be back for more of the Netflix dramedy.

Once Upon a Quarantine (9/8c, Lifetime): From our only-during-a-pandemic TV files: a relationship reality special self-filmed over 60 days, capturing four couples facing milestones during this period of self-isolation and uncertainty. For Shannon and John from New Jersey and Camillia and Marquis from Ohio, the issue is childbirth. For Crystal and Luis (Southern California), whose families live in Mexico, and Jennifer and Romain (a long-distance relationship bridging California and France), the question is how and whether to go through with weddings outside the U.S. borders.

Plus, they offer their thoughts on the show's controversial tenth season.

Similarly, Lifetime's Married at First Sight: Couples' Cam (8/7c) revisits fan-favorite couples from the series' first decade as they film the latest developments of their lives together with mounted cameras, diary cams and virtual group chats.

Who Was Phyllis Schlafly? Get to Know Cate Blanchett's 'Mrs. America' Character

Blanchett has portrayed real-life figures before, but no one as incendiary as Phyllis Schlafly. Learn more about the anti-feminist firebrand.

Mrs. America (10/9c, FX on Hulu): Amid the fabulous cast of actresses depicting historic figures of the feminist and anti-ERA movements of the 1970s, the terrific Sarah Paulson has held her own in a composite role as Alice Macray, best friend of Phyllis Schlafly (Cate Blanchett) who has been mostly content to stay in her famous friend's shadow. In the penultimate episode of this tremendously entertaining docudrama series, Alice becomes the focus, somewhat reluctantly, as she travels to Houston with her cohorts — several of them rivaling Phyllis in ambition — as part of a counter-rally at the National Women's Conference. Amid the chaos of an overbooked hotel forcing her to rub shoulders with the perceived enemy, Alice is further disillusioned at some of her fellow activists' unscrupulous tactics to take the "libbers" down. Not to mention the association with hate groups like the Klan. But as Southern fundamentalist Lottie Beth Hobbs (Cindy Drummond) tartly observes: "To love completely means learning to hate properly." And so it goes. Olivia Pope is bringing her fixer skills to the streaming platform.

Inside Wednesday TV: Hulu becomes the exclusive streaming home to all seven seasons of Shonda Rhimes' guilty pleasure Scandal, which I once described as "popcorn TV with crazy sauce poured on top." The description holds for most of the melodramatic run, perfect for a delirious binge… The CW's grueling YA sci-fi drama The 100 (8/7c) returns for its seventh and final season, with Clarke (Eliza Taylor) and her fellow survivors setting up a new compound in hopes of rebuilding Sanctum and restoring peace. As if… Don McLean's classic American Pie provided a moving finish to the first season of NBC's Zoey's Extraordinary Playlist. The singer-songwriter sits with Dan Rather on AXS TV's The Big Interview (8/7c) to discuss the inspiration for that song and "Vincent" among other topics… FX's hilarious horror comedy What We Do in the Shadows (10/9c) welcomes back comedian Nick Kroll in an episode directed by series co-creator Jemaine Clement. As the notorious vampire Simon the Devious, who's been dwelling in the sewers since his NYC club exploded last season, he reconnects with his fellow vamps and moves his diminished crew (including a very creepy ghoul named Carol) into their home. But is he harboring a secret agenda?

Betty White's assistant shares one of her final photos

"She was radiant and beautiful and as happy as ever," the post read. See how Betty White was celebrated on what would have been her 100th birthday.

The hardships of Season 1 are nothing compared to Season 2.

Netflix's 'Archive 81' is a slow-building horror of a mystery

Netflix's psychologically tense and suspenseful "Archive 81" is an urban mystery dipped in the occult, sprinkled with "Black Mirror"-like madness.

A follow-up to “How I Met Your Mother” might have happened a lot sooner. “This Is Us” just got in the way.

Possibly under the theory that every generation entering its 30s will need the mirror of a situation comedy, “How I Met Your Mother” has been rebooted.

REVIEW: 'Cheer' tumbles back with new drama, lots of conflict

It isn’t “business as usual” in the second season of “Cheer.”