An elderly penguin at the St. Louis Zoo named Enrique is getting a lot of traction on social media — out of his custom-designed boots.

A Facebook post made Wednesday by zoo visitor Joshua Ketelsen showed a picture of a peculiar sight at Penguin & Puffin Coast: a penguin wearing a tiny, yet wide, pair of boots. Ketelsen detailed his interaction with the keeper:

Me: There’s a penguin over there wearing shoes.

The keeper gave him an explanation, which pretty much jibes with what Dr. Jimmy Johnson, staff veterinarian at the zoo, and Dr. Sathya Chinnadurai, director of animal health at the zoo, had to say Friday about it.

Enrique, a southern rockhopper penguin native to the southern tips of South America and Africa and some islands around Antarctica, came to the zoo in 2016 and is estimated to be more than 30 years old. That’s very old for this species; the median life expectancy in the wild is about 10 years, said Johnson.

“We always say his longevity is a credit to the zoo continuing to provide him with great care and expert husbandry,” said Johnson. “We’re lucky to have had him with us for such a long time.”

As anyone getting up in years might sympathize, Enrique started having issues with arthritis in his feet. He had always gotten around well but started slowing down this past year.

Veterinarians took a look and saw Enrique had developed larger, thicker calluses at the bottom of his feet, which can happen with arthritis. They treated Enrique with a variety of medicines and topical sprays and creams to see what would help. But the topical stuff would wash off every time he hopped in the water for a swim, and reapplying it took the keepers’ time away from other penguins.

“We started thinking outside the box,” said Johnson, “and that’s where the boots come in.”

At a previous institution where he worked, Johnson had seen swans with related types of feet issues that had similar boots made for them. A penguin with a molting issue also got a custom wetsuit so as to not get too cold while swimming.

St. Louis Zoo staff are used to “MacGyvering” equipment for animals — whether it’s boots for birds or old fire hoses or barrels for swinging primates. For some smaller birds, ones that weigh 20 or 30 grams, they may make leg splints from paper clips or the shaft of a cotton swab, said Chinnadurai. “There are no (traditional) materials for tiny little legs,” he said.

‘I guess he didn’t mind’

As for Enrique, the zoo approached a New Jersey-based company that makes boots for dogs and cats, called Thera-Paw, and asked if it could customize a cushioned, rubber pair. Zookeepers measured Enrique’s feet, sent the numbers to the company and got their first prototype pair in September. After a few adjustments, they got a new pair about a month later.

“He’s a pretty easygoing bird,” said Johnson. “We put the shoes on and set him on the ground to see what would happen. Initially he took some big steps and then he took off. I guess he didn’t mind.”

The shoes strap on with hook-and-loop material, and keepers put them on in the morning and take them off at night before bed. They’re black with red grips on the bottom — they didn’t want to make them too bright to throw off the other birds. They’re also marked with an L and an R to keep them on the right webbed feet. (That’s for the keepers, not Enrique, Johnson confirms.)

Since using the boots, Enrique hasn’t required medicine for his feet and has moved around his habitat with more gusto. “He’s swimming more than he used to, he’s climbing higher on the rocks than he used to,” said Johnson.

Meanwhile, Ketelsen, who made the Facebook post, is getting a kick out of its popularity. He’s a pastor at Immanuel Lutheran Church in Boonville, Missouri, and had visited the zoo Wednesday afternoon with his wife, Stefani, and their 7-year-old daughter, Emi. Emi loves watching shows about zoos and veterinarians and loves penguins, so she loved seeing Enrique in his boots.

“He’s got such a grumpy old man face,” said Ketelsen, “but he’s still adorable in his shoes.” 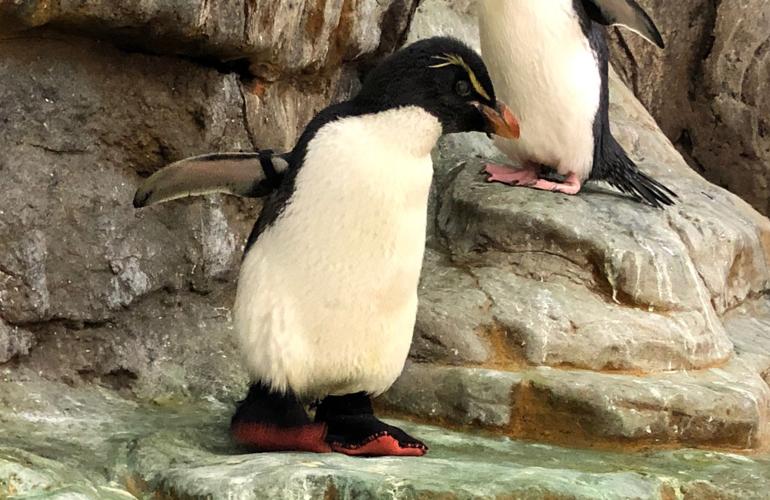 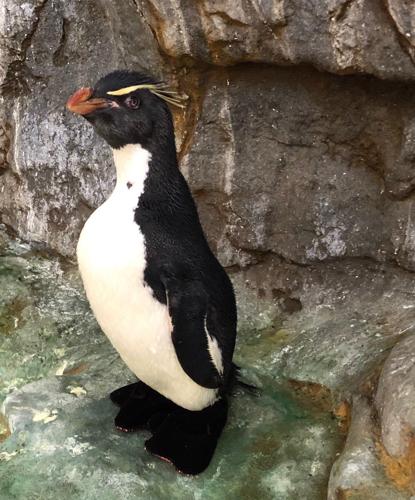 Enrique, a rockhopper penguin at the St. Louis Zoo, is at least 30 years old and started having arthritis issues in his feet last year. Keepers had a pair of cushioned, rubber boots made for him, which have helped the problem. He gets around just fine, zoo vets say. (photos courtesy of St. Louis Zoo)