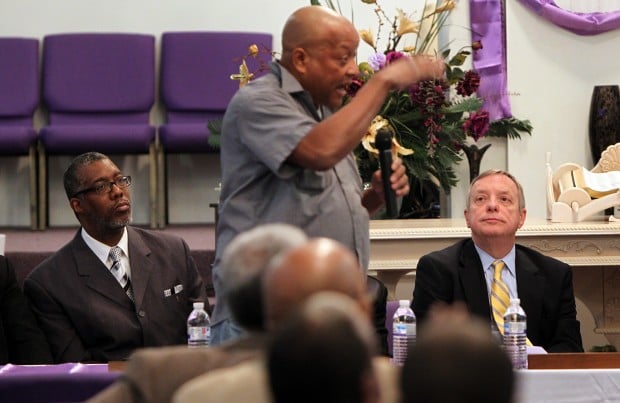 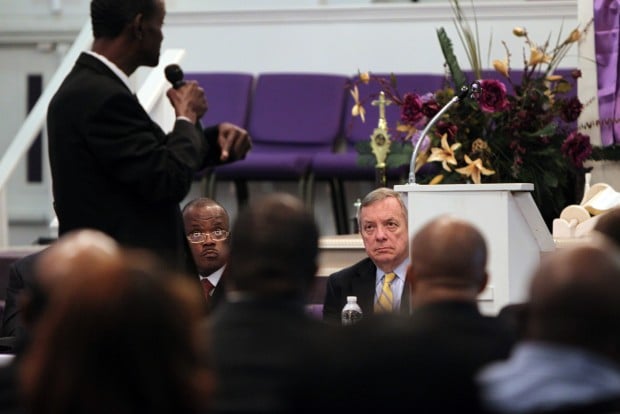 Durbin, the high-ranking Senate Democrat who grew up in East St. Louis, said on Wednesday things in the city, mostly violence, is “dramatically worse” than in the old days in the 1950s when gangster Frank “Buster” Wortman ruled the Metro East from the Paddock tavern. The days when East St. Louis was still known as an industrial hub.

“I have a picture of my brother down at the Paddock Lounge sitting next to, arm around, Louis Armstrong,” Durbin said on Wednesday at a meeting with the Post-Dispatch editorial board. “I mean, that was back in the day.”

But Durbin, 67, says the city is at a dire crossroads today. A fact buttressed by U.S. Attorney Stephen Wigginton, who says East St. Louis is statistically “the most dangerous community in the United States.”

“It isn’t about nostalgia,” Durbin says. “It’s about the safety of that town”

Durbin had returned to his hometown earlier on Wednesday and spoke to a gathering of religious leaders at the Mount Paran Missionary Baptist Church. He again called for Mayor Alvin Parks to end the city’s late night liquor sales, which he called “an invitation for more murders, more crime.”

The beleaguered city’s current state was crystallized last weekend on NBC’s Saturday Night Live, when the comedy show labeled the town “a hellhole” in a Mitt Romney skit.

“I read about it,” Durbin said. “And you know people can make jokes all they want, but it’s no joke when you’re living in a town where people are getting gunned down, where policemen are getting shot in the face, that’s no joke. I think for all of use who call East St. Louis part of our heritage, we want to make a better day for the city.”

Durbin insisted that a “better day” will dawn when the city takes bold action and curbs late-night club hours. Mayor Alvin Parks disagrees, saying that the clubs bring in much needed tax revenue, which helps to keep police officers on the streets.

“If the clubs weren’t open until 6 o’clock in the morning you wouldn’t need as many police on the street until 6 in the morning,” Durbin said. “If people weren’t streaming over that bridge at 1 a.m. because the people of St. Louis have said we don’t think it’s good for our city to keep clubs open beyond 1 a.m. you wouldn’t need as many policeman. 1 a.m. cutoff for alcohol sales in stores and clubs.”

Durbin has taken an interest in East St. Louis, where his parents worked on the railroad to send him to Assumption Catholic High School. He lamented seeing a video about a man who had recently been shot “a few block from where I went to high school.”

Durbin asked for the religious leaders to come up with a solid vision to help save East St. Louis.

Zachary L. Lee, a pastor at Mount Paran Missionary Baptist Church, told Durbin the city has an “international bad reputation.” Solving it, he said, will begin with religious and community leaders working together.

Michael Floore, the city’s new police chief, told Durbin he needs more police officers on the street. The department now has 46 officers, down from more than 60 just a few years ago.

“We need some help,” Floore said.

Bernadette Bowens, 54, said she has lived in East St. Louis her entire life. She disagreed that curbing late-night liquor sales will solve its problems.

“We need policemen,” Bowens said. “You can’t put this on the tavern owners. They can close them down but it’s not going to stop the murders.”

“We’re living in a city, not a dump,” Bowens said. “It doesn’t make sense to bash a little town.”

East St. Louis has spent decades dealing with stunning crime and poverty. Once an industrial hub known for its abundance of jobs, the city has been decimated by political corruption and racial tension. Today, it often serves as a case study for urban decay.

Through the years, those conditions has put the city on the big and small screen. The FOX network’s “The Simpsons” drew ire when the cartoon declared East St. Louis to be America’s least livable city. In the episode “They Saved Lisa’s Brain,” a character stated the cartoon’s fictional Springfield “has moved up to #299 on the list of America’s most livable 300 cities. Take that, East St. Louis!”

The city, however, once enjoyed a better reputation. The iconic postwar family television series “Leave it to Beaver” referred to June Cleaver as the “belle of East St. Louis” in an episode that aired in 1961. Just a year before that, the city had been labeled by Look Magazine and the National Municipal League as an “All-America City.” The magazine ranked the city ahead of Honolulu and Burbank, Calif., on its list of the nation’s most progressive communities.

East St. Louis is emblematic of urban problems that have resisted a half century of efforts by leaders of both parties.

The damage is sizable, education officials say, and the efforts required to fix it, herculean.