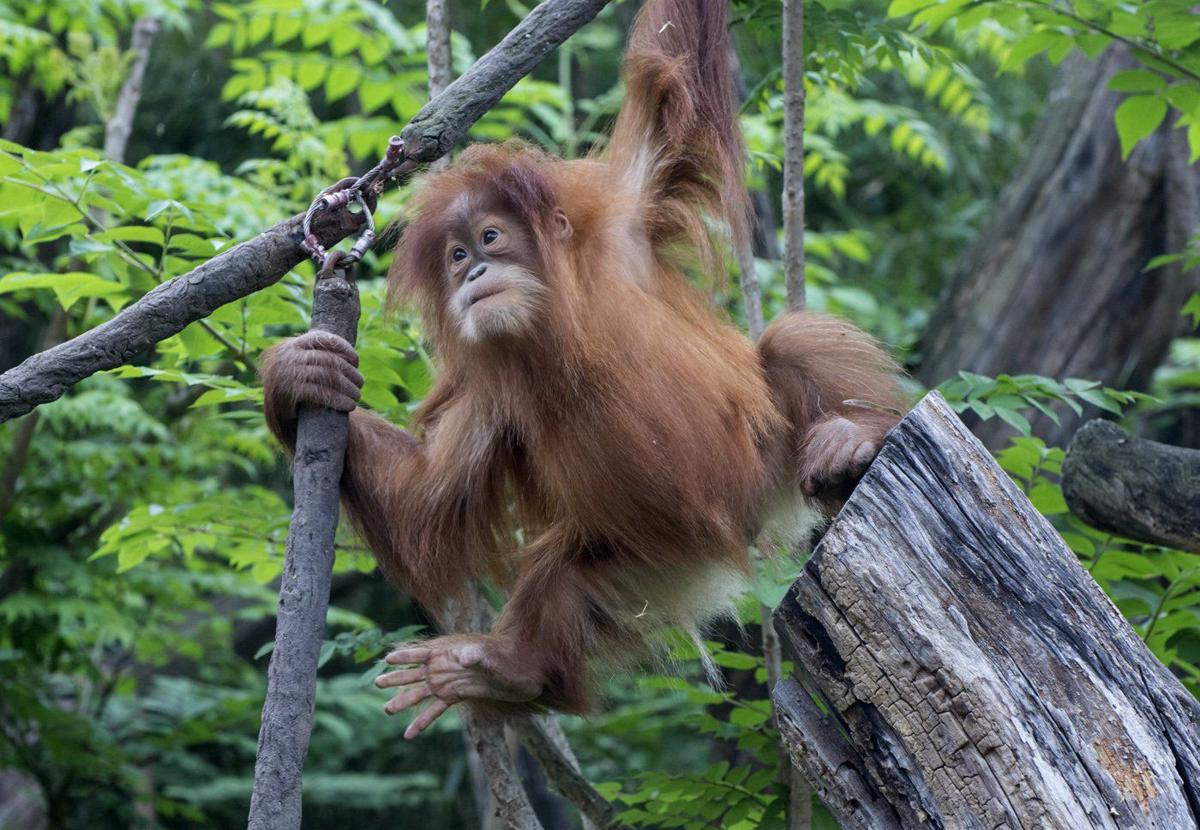 Ginger, an orangutan at the St. Louis Zoo, climbs in her habitat. Photo by Robin Winkelman 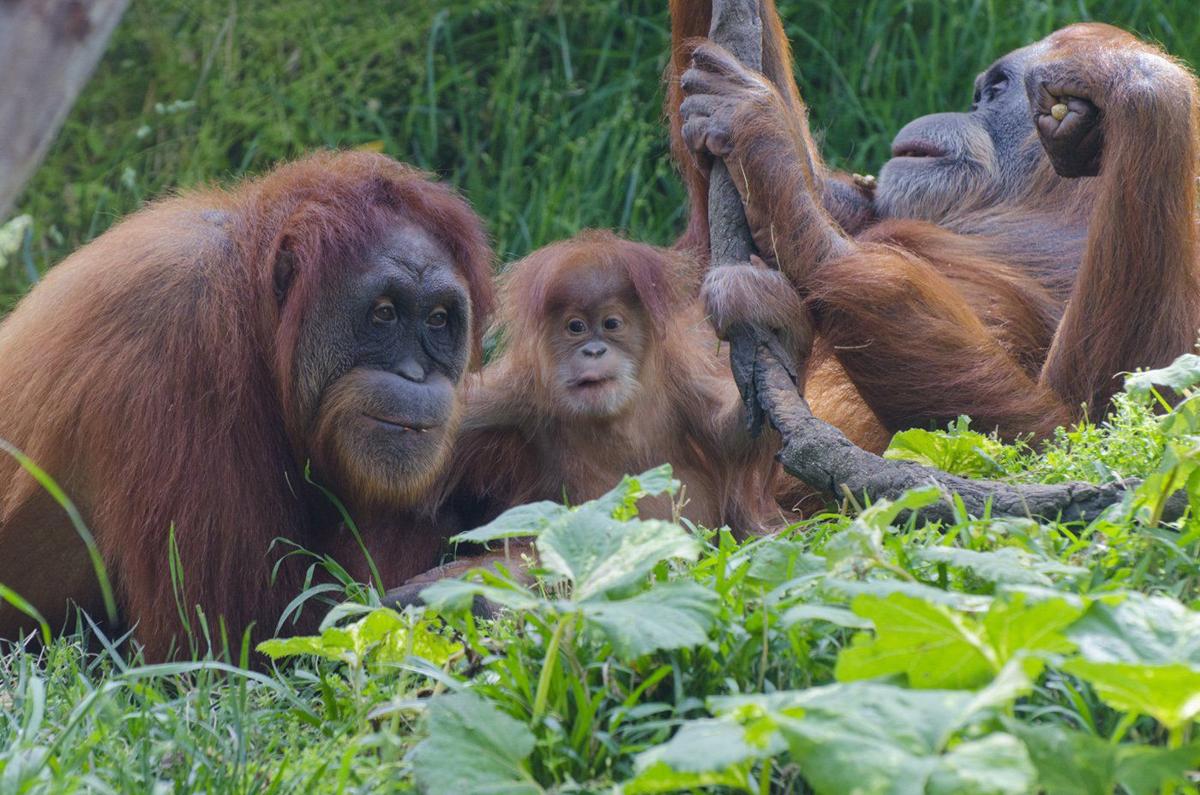 The orangutans at the St. Louis Zoo. Photo by Robin Winkelman 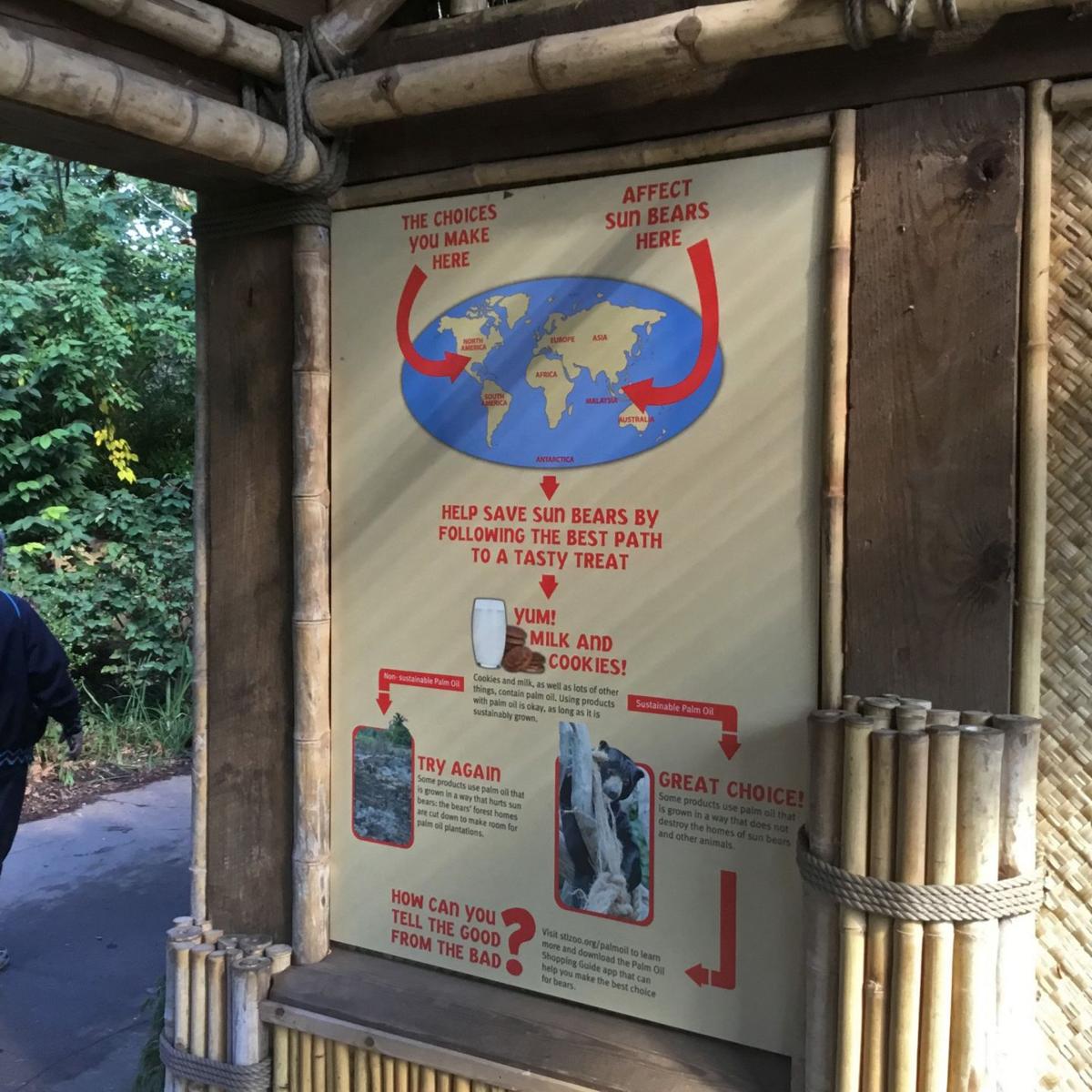 A sign at the Saint Louis Zoo displays an environmental consequence of using palm oil.

Especially the labels of Halloween candy at this time of year, and labels on dozens of other consumable goods. Those products might contain palm oil.

Palm oil, if not grown sustainably, is what’s behind the fast destruction of orangutan habitats in southeast Asia. Bornean orangutans are considered endangered, and Sumatran orangutans, of which the zoo has four, are critically endangered — the level before becoming extinct in the wild. Seasonal forest fires, some probaby set by farmers clearing land for palm oil plantations, have killed or displaced dozens of orangutans.

“We need people to understand and care. Orangutans are what are going to make you care,” said Heidi Hellmuth, the zoo’s curator of primates. She traveled to North Borneo in southeast Asia last summer to visit Hutan, a conservation program the zoo supports. “I feel like we’re on the cusp of getting there. We almost have the momentum to go downhill.”

The St. Louis Zoo has formed a Palm Oil Task Force, which meets monthly to talk about the zoo’s own use of products containing palm oil and how to best spread the word about the issue.

Palm oil is used for food, detergents, cosmetics and biofuels. It’s taken from the fruit of the oil palm tree, and is popular because of its high melting point, high yield and lack of trans fats, though it’s high in saturated fats. In 2013, the FDA banned partly hydrogenated oils, a huge source of trans fats. In recent years, palm oil demand has boomed.

The zoo wants to support palm oil that comes from sustainable plantations, which are certified by the Roundtable on Sustainable Palm Oil. The roundtable was established in 2004 to better oversee the industry. The group wants to make sure the workers producing the oil are working in fair conditions, ones that do not destroy the habitats of endangered animals such as orangutans. But advocates say buying roundtable-certified products is only a start — more companies need to keep closer tabs on their supply chains to find out where their ingredients originate.

In order to spread the word, the zoo has been checking its own books. In 2014, zoo intern Lani Gusman did an inventory by going to the distribution center and reading every label of every consumable product used at the zoo — from fish food to ice cream bars to bathroom soap. A spreadsheet lists more than 600 items. Task force members are working with their catering company and general food service buyers to make sure the goods they use are orangutan-friendly.

The candy distributed at special events, such as this month’s Spooky Saturday and Boo at the Zoo, and Wild Lights over the holidays, has been orangutan-friendly for the past few years, they said. They’re working on increasing signage to increase palm oil awareness at these events.

Labeling is one issue. Often, palm oil isn’t listed by that ingredient name; it can be listed as vegetable oil, palmate, sodium kernelate and several other names.

Zoos are playing a part to help. The Cheyenne Mountain Zoo in Colorado Springs created a free sustainable palm oil shopping guide app, where shoppers can type in the name of a product and learn whether it contains sustainable palm oil. The Philadelphia Zoo has kiosks where visitors can send supportive emails to companies encouraging them to use sustainable palm oil. The Point Defiance Zoo and Aquarium in Tacoma, Wash., launched a Paws for the Cause palm oil awareness campaign centered on Sumatran tigers, clouded leopards and other animals. The St. Louis Zoo has a page on its website about orangutans and palm oil.

“This is something where you can go to your grocery store and help every time you go,” said Emily Bowling, a conservation education liaison who works with the primate unit. “This is an opportunity to help some animals half a world away.”

Palm oil growth is spreading to Africa and Latin America, and orangutans are not the only animals affected — so are other St. Louis Zoo animals including gorillas, Asian elephants, sunbears and hornbills.

Hellmuth says her mission is to make sustainable palm oil the next dolphin-safe tuna. That label started in the United States in 1990 to better protect dolphins during tuna fishing. Companies will comply with certain standards if consumers demand it, she says.

She smiles and waves her hands when she talks about her “crazy dream,” to make a Super Bowl commercial about palm oil awareness.

This list, compiled by the Cheyenne Mountain Zoo, is a guide to companies that are members of the Roundtable on Sustainable Palm Oil. They are committed to using certified sustainable palm oil that is deforestation-free.

Ginger, an orangutan at the St. Louis Zoo, climbs in her habitat. Photo by Robin Winkelman

The orangutans at the St. Louis Zoo. Photo by Robin Winkelman

A sign at the Saint Louis Zoo displays an environmental consequence of using palm oil.