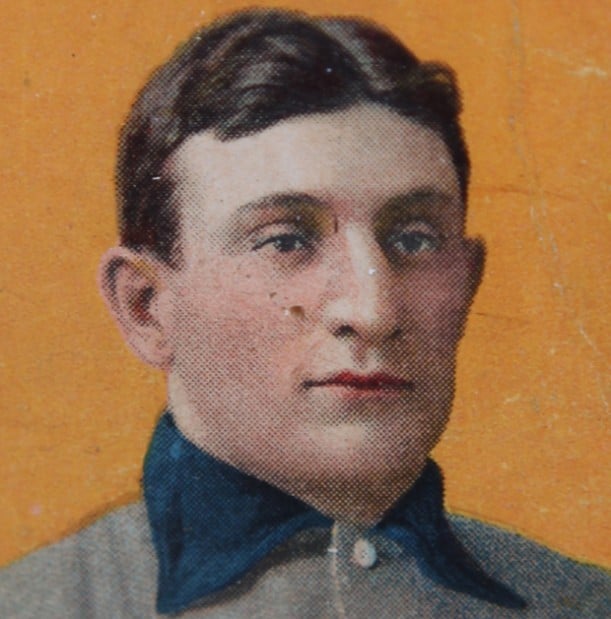 A close-up view of the Honus Wagner card that Bill Goodwin is auctioning off. 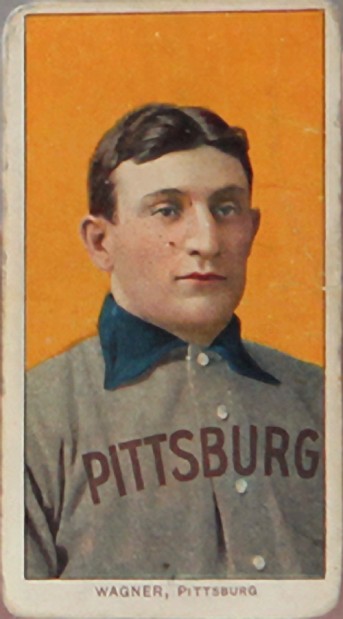 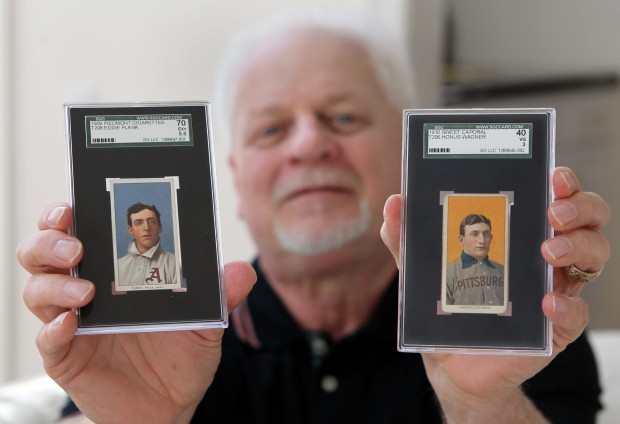 Bill Goodwin displays two valuable baseball cards on Tuesday, March 13, 2012. An Eddie Plank card is at left, and a Honus Wagner card is at right. Photo by J.B. Forbes, jforbes@post-dispatch.com 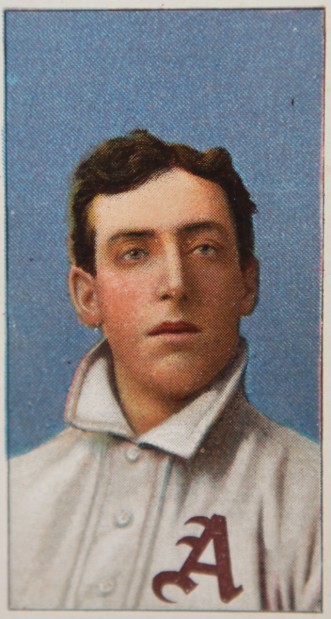 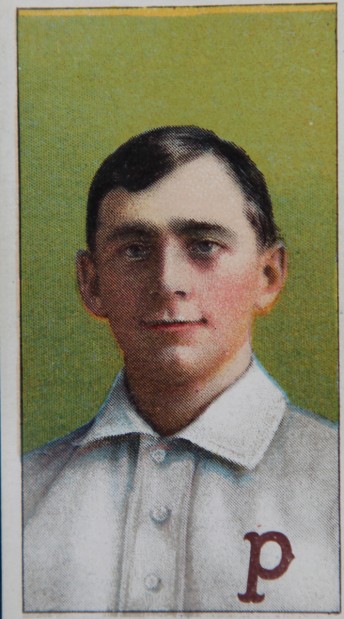 Bill Goodwin is auctioning off this Sherry Magee card. The player's name was misspelled with the name Magie. Photo by J.B. Forbes, jforbes@post-dispatch.com

A relic of America's pastime rang up a million-dollar payout Friday in St. Louis, when a rare and legendary Honus Wagner baseball card sold for more than $1.2 million.

"You know you always want to get a little more, but we did well. The final sale price is about $300,000 more than that of the last Wagner" of similar physical condition, Goodwin said.

Goodwin said the buyer is a New Jersey resident, who went to bed after winning the 14-bid auction shortly after 2 a.m. The buyer had not yet decided if he wanted to be identified, Goodwin said. The card was owned by a Houston businessman who acquired it in the mid-1980s. He declined to be identified.

The card is commonly referred to as the “Holy Grail,” for its incomparable value and scarcity making it the pinnacle of sports-card collecting.

It is part of a set of cards known as "T206," which were issued from 1909 through 1911 by the American Tobacco Co. Smaller than modern sports cards, they are 2.5 inches by 1.5 inches and were included in cigarette packs. The cards are commonly called "tobacco cards" or "T-cards."

Wagner, a shortstop, was in the first class ever elected to the baseball Hall of Fame, along with Babe Ruth, Ty Cobb, Walter Johnson and Christy Mathewson.

Historians estimate that 60 Wagner cards still exist, and many are in poor shape. Only 22 are in sufficient condition to have earned a grade from Sportscard Guarantee Corp. (SGC) or Professional Sports Authenticators (PSA), the industry's major grading firms. Goodwin’s card was graded at a “VG-3” by SGC and is considered to be one of the top six in existence.

The Wagner card stands above the others because it was pulled from circulation after only 200 or so cards were issued.

The original story was that Wagner did not want to encourage children to buy cigarettes or smoke, so he threatened to sue if any more of his cards were released. But some serious collectors and dealers, including Goodwin, believe Wagner may have been irked about not getting paid for the use of his likeness, which had already been used to promote other tobacco products. Nevertheless, the company stopped issuing Wagner cards.

The card got a major public boost in 1991, when hockey legend Wayne Gretzky and then-Los Angeles Kings owner Bruce McNall paid $451,000 for the highest-graded Wagner card in existence, an “8.” The “Gretzky Wagner” has changed hands several times since and last sold in 2011 for $2.8 million to Ken Kendrick, owner of the Arizona Diamondbacks.

While the Wagner card easily was the biggest star in Goodwin’s auction, several other T206 cards Goodwin sold went for substantial amounts:

An Eddie Plank card, also from 1909, went for slightly more than $330,000. Plank is a Hall of Famer who won 326 games, mostly with the Athletics, from 1901 through 1917. Plank spent the 1915 season with the St. Louis Terriers of the short-lived Federal League and then returned to the American League to finish up with the Browns.

A Sherry Magee “error” card ended up selling for $80,000. The card’s value comes from the player’s name being incorrectly spelled "Magie," making it worth more than later, corrected versions.

Two other cards with St. Louis connections also sold for solid amounts: A Cardinal Bill O’Hara went for just under $10,000 and a Brown Ray Demmitt sold for more than $3,000. Both players were traded to St. Louis after the season began and few cards list them as being St. Louis players.

Drinking habits to avoid for a healthier heart

Keeping your jack-o’-lantern fresh through Halloween

Keeping your jack-o’-lantern fresh through Halloween

He's accused of defrauding customers by misrepresenting the condition or authenticity of items like Elvis Presley's hair.

"Holy Grail" of baseball cards could fetch more than $1 million.

One of Dr. Wayne Fischer's most valuable possessions hung crookedly in a broken frame, scarred by dark burns and covered in ice, frozen from the water of firefighters' hoses. It's the official scorecard from Sept. 29, 1963, the last game played by Cardinals great Stan Musial.

SPRINGFIELD, Ill. •The state of Illinois is auctioning unclaimed property online through Sunday.

Super fan could use a hand from Superman

Granite City police are investigating after Mike Meyer was tricked out of about 1,800 of his Superman comic books, some dating to the 1950s.

UNION • Phyllis and Ron LaPlant may be $72,700 poorer, but now they can wrap themselves in the comfort of two treasured family heirlooms.

A close-up view of the Honus Wagner card that Bill Goodwin is auctioning off.

Bill Goodwin displays two valuable baseball cards on Tuesday, March 13, 2012. An Eddie Plank card is at left, and a Honus Wagner card is at right. Photo by J.B. Forbes, jforbes@post-dispatch.com

Bill Goodwin is auctioning off this Sherry Magee card. The player's name was misspelled with the name Magie. Photo by J.B. Forbes, jforbes@post-dispatch.com