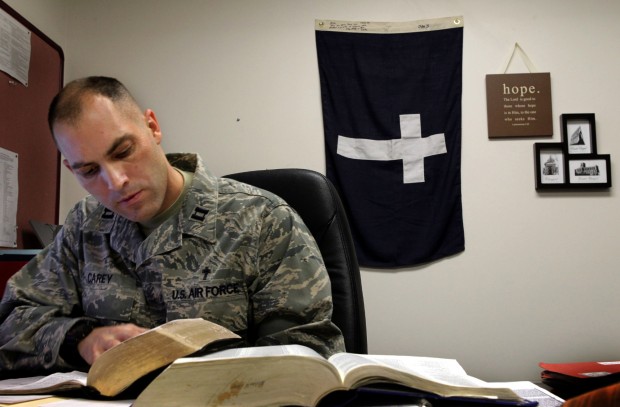 January 7, 2011 - Air Force Capt. Mike Carey, a chaplain at Scott AFB, works in his office preparing for his final Sunday sermon before deploying for Afghanistan. Carey will preach from 2 Corinthians 5:20 - "We are ambassadors for Christ". Behind Carey hangs a chaplain's flag, a gift from a friend who is an Army chaplain. Robert Cohen rcohen@post-dispatch.com 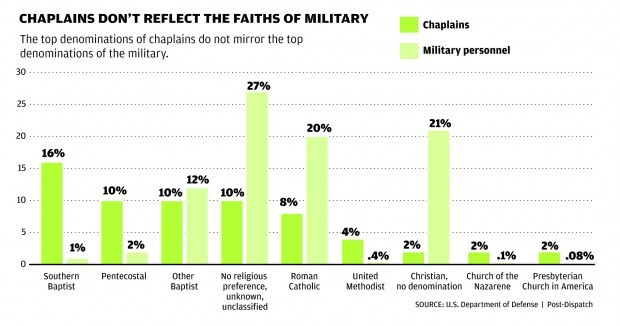 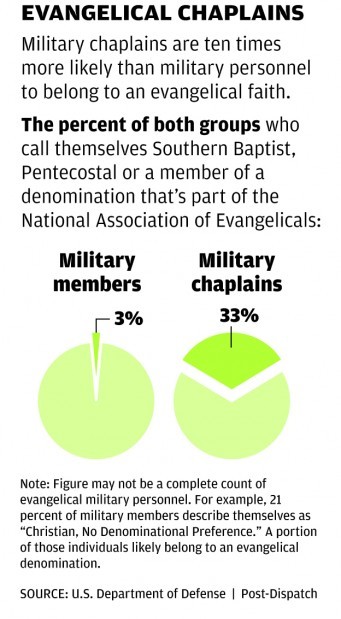 In the military, the chaplain serves as both a religious leader and a listener - ideally one who can assist military personnel of all faiths. A frequent refrain among chaplains is "chaplain to all, pastor to some."

But according to Department of Defense data, the nation's corps of chaplains leans heavily toward evangelical Christianity, failing to mirror the military it serves.

While just 3 percent of the military's enlisted personnel and officers call themselves Southern Baptist, Pentecostal or a member of a denomination that's part of the National Association of Evangelicals, 33 percent of chaplains in the military are members of one of those groups, according to Pentagon statistics.

And the disparity could soon widen.

Data from the Air Force indicate that 87 percent of those seeking to become chaplains are enrolled at evangelical divinity schools.

The discrepancy is the result of a number of variables, including an aversion by mainline Protestant and Catholic seminary leaders to participate in military culture after the Vietnam War; changes in the military's chaplain staffing and education policies; and the popularity of online courses for chaplain candidates at evangelical seminaries.

Military officials point out that chaplains are trained to support troops of all faiths, regardless of their own religious affiliation.

"In these various roles, chaplains respect the rights of others to their own religious beliefs, including the right to hold no beliefs," said Eileen Lainez, a Pentagon spokeswoman.

But liberal theologians and educators say the imbalance could compromise efforts to meet the spiritual needs of soldiers facing combat or the stresses of military life. And some critics go further, arguing that the military risks becoming a mission field for evangelical Christianity.

In response, Eden Theological Seminary in Webster Groves is launching its own program to train chaplains. The school is a seminary of the United Church of Christ, which is among the more liberal mainline Christian denominations. And its decision to train chaplains comes despite reservations about military involvement and objections to war.

"There's a vacuum," said Eden's president, the Rev. David Greenhaw. "And there's a general sense here that it's important to fill that vacuum."

Eden hopes to partner its chaplain track program with Webster University's counseling department, which works extensively with the military. Greenhaw said students would do theological coursework at Eden and counseling coursework at Webster.

The roots of Eden's decision can be traced back to a visit Eden professor Kristen Leslie and her graduate students made in 2004 to the Air Force Academy in Colorado Springs to train chaplains there to deal with sexualized violence on campus.

Leslie, then a professor at Yale Divinity School, later filed a report saying she and her students observed cadets who "were encouraged to pray for the salvation of fellow (cadets) who chose not to attend worship" and were told that those not "born again will burn in the fires of hell."

Mikey Weinstein is a graduate of the Air Force Academy and president of the Military Religious Freedom Foundation, which argues that a military heavily influenced by evangelical Christianity threatens to trample the establishment clause of the First Amendment.

"These are government-backed missionaries for Jesus Christ who see the military as a mission field, fecund and fertile for proselytizing," Weinstein said. "I commend (Eden) for trying to fight back."

Military officials say they are sensitive to issues of diversity and interfaith understanding.

"We look, in particular, for a pluralistic understanding or attitude," said Col. Steven Keith, a chaplain and commandant of the Air Force Chaplain Corps College in Fort Jackson, S.C. "We want you to keep your theology, and be able to work with people of different theologies. "

Chaplains at Scott Air Force Base, whose duties include caring for airmen and airwomen who are readying to deploy, say being sensitive to all faiths is critical.

Maj. Kenneth Johnson, a chaplain and an African Methodist Episcopal Church pastor, said that while he has opportunities to promote his own faith, he generally steers clear of doing so.

"I meet someone where they are, not where I am," Johnson said. "If the Holy Spirit lets that opportunity occur, it will, but you have to stay true to the spirit of who you are as a minister."

Col. Douglas Slater, a fellow chaplain at Scott, said that while chaplains should strive to be pluralistic in their work, they nonetheless "can't leave the roots of our endorsing agents."

Leslie's findings on her visit to the Air Force Academy point to a far more aggressive form of proselytizing by military chaplains and commanders. Her testimony on the issue before the U.S. House Armed Services Committee in 2005 helped lead the Air Force Academy to issue revised guidelines designed to encourage respect for the rights of cadets from all faith backgrounds, and those who don't claim any particular faith.

Even so, in August a leaked report of a recent survey of cadets published by the Colorado Springs Independent revealed that 3 percent of cadets said they had been "subjected to unwanted proselytizing sometimes or very often." An additional 5 percent said they'd been proselytized "once or twice."

Critics say much of the problem stems from the fact that the faiths of chaplains are not reflective of military rank and file.

For example, the most popular Christian denomination among military members - as it is among the general public - is Catholicism. Twenty percent of those in the active duty military identify themselves as Catholic. Just 1 percent, meanwhile, are Southern Baptist.

In contrast, 16 percent of active-duty chaplains are Southern Baptist, while just 8 percent are Catholic, according to the Pentagon.

Meanwhile, there's less disparity in faith between non-Christian military personnel and non-Christian chaplains. In both cases, fewer than 1 percent identify themselves as being either Jewish, Muslim, Buddhist, B'hai or Hindu.

Even so, there are only 33 such chaplains across all branches of the military, according to the Pentagon, making it unlikely that personnel adhering to those faiths would ever encounter a chaplain of their faith tradition.

That's where aspiring chaplains enroll to first earn a Masters of Divinity, a requirement for military service.

But as illustrated by the Air Force data, the vast majority of prospective chaplains are choosing divinity schools with an evangelical Christian focus.

That's probably a reflection of the religious preference of chaplain candidates, who are inclined to pick a school within their own denomination.

But some say the high number of chaplain students at evangelical divinity schools also has to do with marketing and recruitment by schools.

For example, Liberty University, an evangelical seminary in Virginia closely connected to the Southern Baptist Convention, has been able to recruit hundreds of chaplain students - most of them for the Army - in part because the school offers online degrees. Now, no school in the nation enrolls more potential future chaplains.

But military officials say that just because chaplain students are overwhelmingly enrolled in schools such as Liberty does not mean they will ultimately become chaplains.

Air Force chaplaincy in particular is a notoriously competitive assignment.

After Air Force chaplain candidates earn a Masters of Divinity degree, become ordained and work in a house of worship for three to five years, they must reapply through their denominational endorser to become a full-fledged chaplain.

Keith said the Air Force used to have a formula for denominational balance so that if one Methodist chaplain retired, for instance, another would be sought to take his place.

"The system now is ‘most qualified,' with the underlying thought that the denominational balance will work out," Keith said.

He said there had been a recent effort among Air Force leaders of an "intentionality to examine balance."

Many who criticize the military for a lack of religious diversity among chaplains point to Vietnam for an explanation.

In the 1960s and early 1970s, the leaders of many mainline Protestant denominations stayed true to the name of their centuries-old Christian movement as they protested the country's war in Vietnam on moral and theological grounds. Many Catholic bishops took a similar stand.

In the decades after the war, the seminaries that train mainline pastors prohibited the military from recruiting chaplains on their campuses.

Conservative evangelical churches grew in popularity and political power in the 1980s and 1990s, and their seminaries filled a vacuum in the military chaplain corps.

"Post-Vietnam, mainline denominations wouldn't let military recruiters on our campuses," said Leslie, now a professor of pastoral theology and care at Eden. "In some ways, we did this to ourselves."

Even today, as Eden adds a chaplain program, its leaders say the school is placed in the difficult position of choosing between a theological aversion to war, and a desire to right a theological imbalance they see in the chaplain corps.

"There's a feeling that you don't want to affiliate with the military for fear that such an affiliation could be seen as an endorsement, an encouragement and support for warfare," said Greenhaw.

He said the chaplains Eden hoped to produce would be "distinctively Christian, actively ecumenical and actively interfaith."

And despite some theological reservations about working with the military, the Eden faculty is on board.

"Schools like ours have tended to not want to be involved," Greenhaw said. "You have the full weight of ambiguity about even having a military, but ambiguity doesn't mean people in the military shouldn't have the ministry of the church."

January 7, 2011 - Air Force Capt. Mike Carey, a chaplain at Scott AFB, works in his office preparing for his final Sunday sermon before deploying for Afghanistan. Carey will preach from 2 Corinthians 5:20 - "We are ambassadors for Christ". Behind Carey hangs a chaplain's flag, a gift from a friend who is an Army chaplain. Robert Cohen rcohen@post-dispatch.com