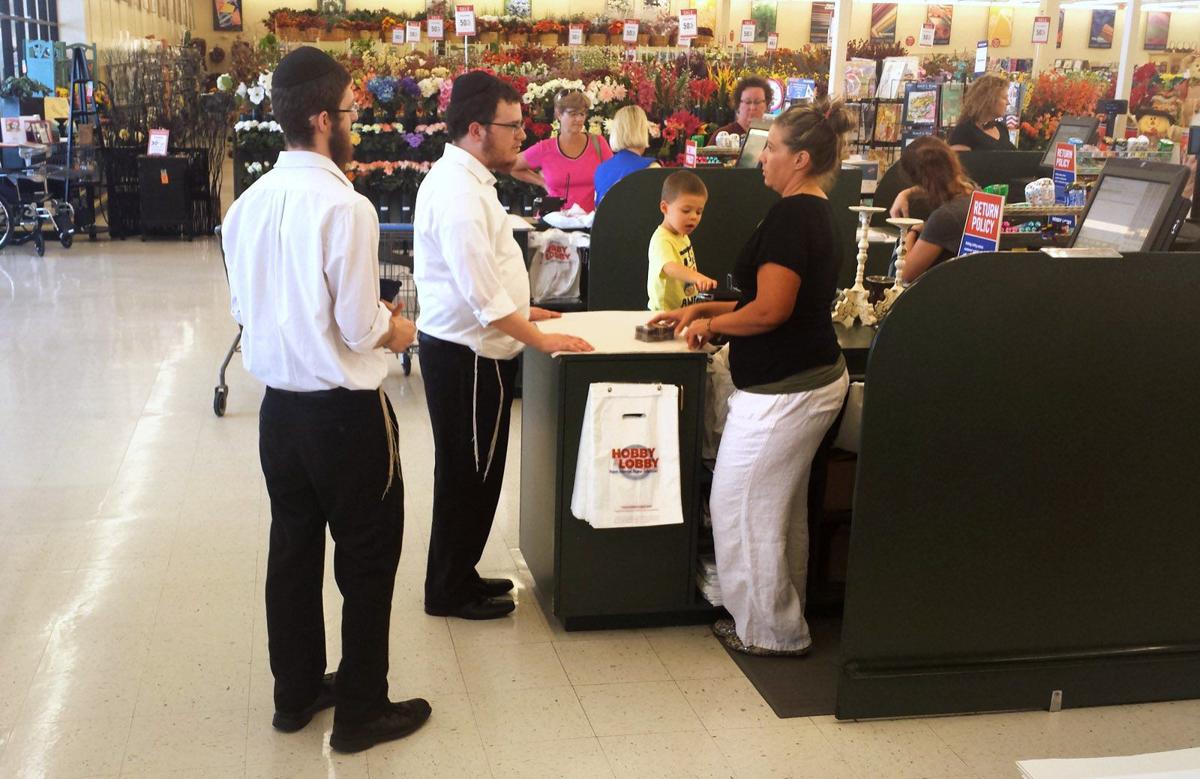 Roving rabbis Mendel Cohen (left) and Yossi Sirota talk with an employee at Hobby Lobby in St. Peters on Aug. 17, 2016. They are looking for Jewish people in hopes they will become more active in their faith. Photo by Jesse Bogan, jbogan@post-dispatch.co 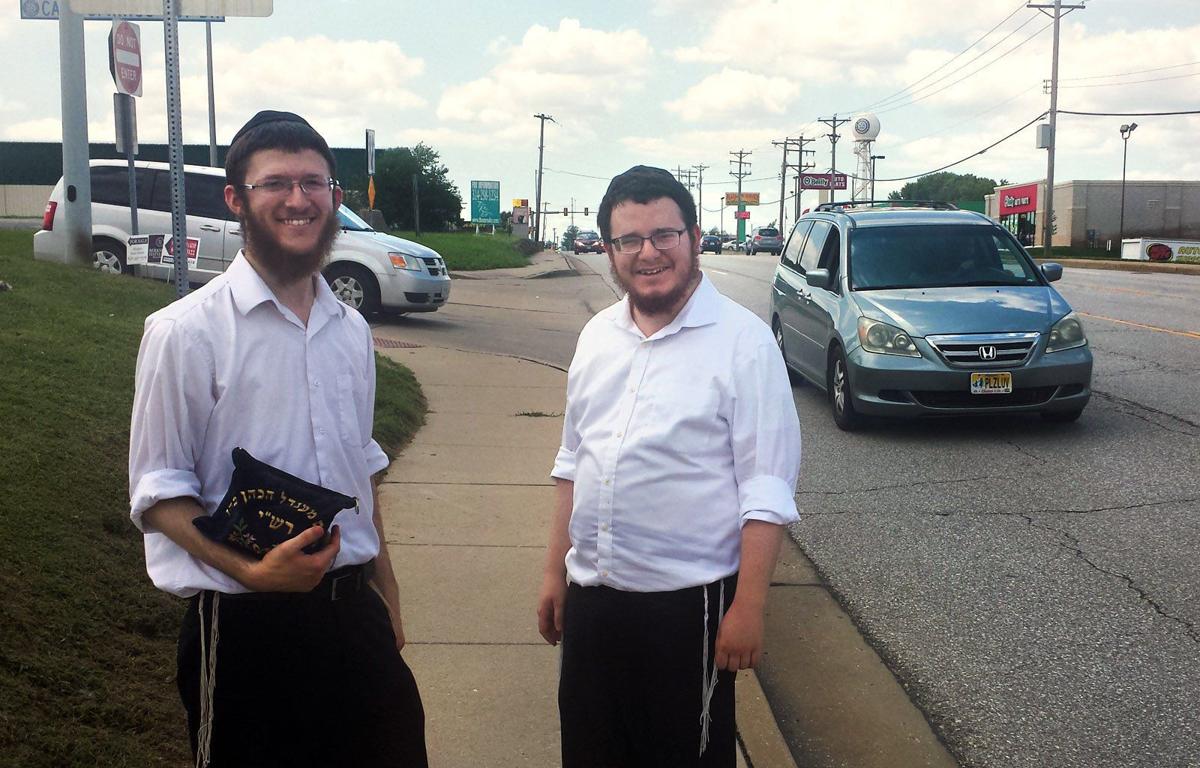 ST. PETERS • It’d be one thing to be confused with their beloved prophet Elijah, announcing the Messiah’s return, but people here often mistook Mendel Cohen and Yossi Sirota for devout street missionaries of some kind.

The determined young men, both 21, sported beards, white dress shirts and black pants with tassels dangling from the hips. One carried literature and the other tools of their faith in a small bag with ancient writing on the side.

No, no, they politely explained from under their skull caps, they didn’t want to convert anybody. They weren’t Jehovah’s Witnesses nor Jews for Jesus.

They were “roving rabbis” on the hunt for mitzvahs, or good deeds, which they believe are incalculable in value. Nobody knows which one will tip the global scales.

Drawn by robust population growth, their canvas for three weeks this month was St. Charles County. Others in the same rabbinic internship visitation program, which dates to the 1940s, were looking for Jewish people in more exotic locales in the world.

But these two, and their mentor, believed there was important ground to cover here because they said there isn’t a synagogue or rabbi in the immediate area.

“We are foot soldiers,” Sirota said, making the rounds on a recent day. “It’s where we can go and bring light.”

Cohen and Sirota are Hasidic Jews, among the most religiously conservative Jewish sects.

While in St. Charles, they wanted Jews to celebrate their heritage with Sabbath candles on Friday evenings, a mezuzah on the door frame or wrapping a pair of Tefillin straps around an arm and forehead while reciting a Hebrew prayer.

Cohen, of Charlotte, N.C., just finished rabbinical school. Sirota, of Denver, is almost there. Sons of rabbis, they went away to school when they were 12 and 13 to pursue religious studies in an Orthodox movement called Chabad that’s big on Jewish outreach.

Rabbi Yosef Landa, regional director of Chabad of Greater St. Louis, invited the men, as he’s done for others over the past decade or so for the program. This time he dispatched them to St. Charles County after reading a 2014 study sponsored by the Jewish Federation of St. Louis that estimated about 5,800 of the region’s 61,000 Jews lived there.

Nearly half of the region’s Jewish population identifies themselves as Reform Jews, which is a more progressive or liberal denomination of Judaism, according to the study. Conservative Jews represented 20 percent and Orthodox 5 percent. About 21 percent identified themselves as “just Jewish” without a specific denomination and 7 percent as secular or other.

“We were taken by surprise by the numbers,” said Landa, of the St. Charles figures. “Institutionally, there isn’t much going on so we are reaching out to individuals.”

Cohen and Sirota often went to Mid Rivers Mall and visited Jews who work at kiosks in the hallways. By the end of their program, they’d made inroads there. A man, 22, who said he was taking a break after serving in the Israeli Army was happy to say a prayer with them on a recent day.

Knocking on doors in residential neighborhoods, they targeted homes with common Jewish names listed in directories.

Perhaps the toughest terrain was canvassing strip malls for the first time. They’d walk into each store and ask if any of the employees were Jewish. In the event there were, they’d want to do a mitzvah with them right there. The odds were slim but the benefits were potentially endless.

So into auto parts stores, hair salons and head shops they went. Managers, such as one at Hobby Lobby, were often caught off-guard but polite. They said they didn’t ask employees about their faith.

Cohen and Sirota took rejection in stride, always pressing onward with a good attitude and their religious kit of supplies at the ready, until, even to their amazement, they hit pay dirt at a cellphone store.

A salesman named Brett Siwak kept smiling, listening to more and more of their pitch. Indeed, he was Jewish and said he had only about 30 seconds to spare. What he really needed was his work computer fixed.

“I can bless it,” Sirota said, keeping the conversation going.

Siwak was up for the Tefillin straps, which include two leather boxes with verses from the Torah, the Jewish holy book, inside.

Clock ticking, there was no time to go to the back of the store. In haste, Cohen dropped part of the kit preparing for the ritual but pulled it all together as Sirota led Siwak through an abridged version of the Hebrew prayer: “Hear, O Israel, the Lord is our God, the Lord is one. Blessed be the name of the glory of his kingdom forever and ever.”

Drawing a few onlookers from the sales room floor, Sirota announced that it was a mitzvah.

Soon they strutted out of the front door with smiles on their faces and didn’t miss a beat as a FedEx delivery man immediately approached. No, the man said, he was not Jewish.

No matter. They’d just connected a man with God who hadn’t been to synagogue since the high holiday of Yom Kippur.

Cohen explained that idealistic view of every mitvah.

“It could be the one that will tip the world into the favor of good,” he said. “We don’t know what we are accomplishing, even if we don’t see it our self.”

In a final report submitted at the end of their program, Cohen and Sirota mentioned they found several Jewish employees.

“A few of them were happy to put on Tefillin in their workplace,” they wrote. “Some of the Jewish employees live in more established Jewish communities, such as Chesterfield and Creve Coeur, but nonetheless it was exciting for them to experience Judaism somewhere else other than their synagogue or Kosher deli. At one point, we even did a lively Chassidic dance with one of our new friends!”

Still, they concluded that the recent assessment of the Jewish population in St. Charles County “perhaps is not as big as perceived to be.”

“That being said, by providing the opportunity or continuing similar work as we did in the area is destined to bring more success,” their report states. “They can be connected to the community or perhaps even with time to have something of their own.”

They hit only St. Peters and O’Fallon, Mo. Landa, their host, said there are more stones to turn over in Wentzville, St. Charles and other communities.

“There is a lot more to be done in terms of continuing this type of work to identify more and more people who would be eager to find points of contact, points of connection with Jewish life,” he said. “When that happens, good things will happen.”

Ebenezer Baptist Church in Fulton is taking steps to protect its at-risk worshippers.

Let's give up panic for Lent, not church attendance

Faith Perspectives: It’s important to take precautions, but it’s also important that we don’t give up church attendance for Lent.

Maryland Heights megachurch keeps the faith in the time of coronavirus

Grace Church St. Louis hosts more than 1,500 people at its 11 a.m. Sunday service. This week, they had to come up with a new plan.

Roving rabbis Mendel Cohen (left) and Yossi Sirota talk with an employee at Hobby Lobby in St. Peters on Aug. 17, 2016. They are looking for Jewish people in hopes they will become more active in their faith. Photo by Jesse Bogan, jbogan@post-dispatch.co