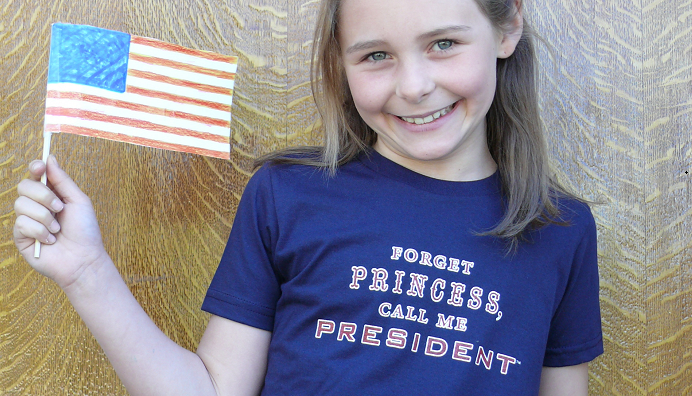 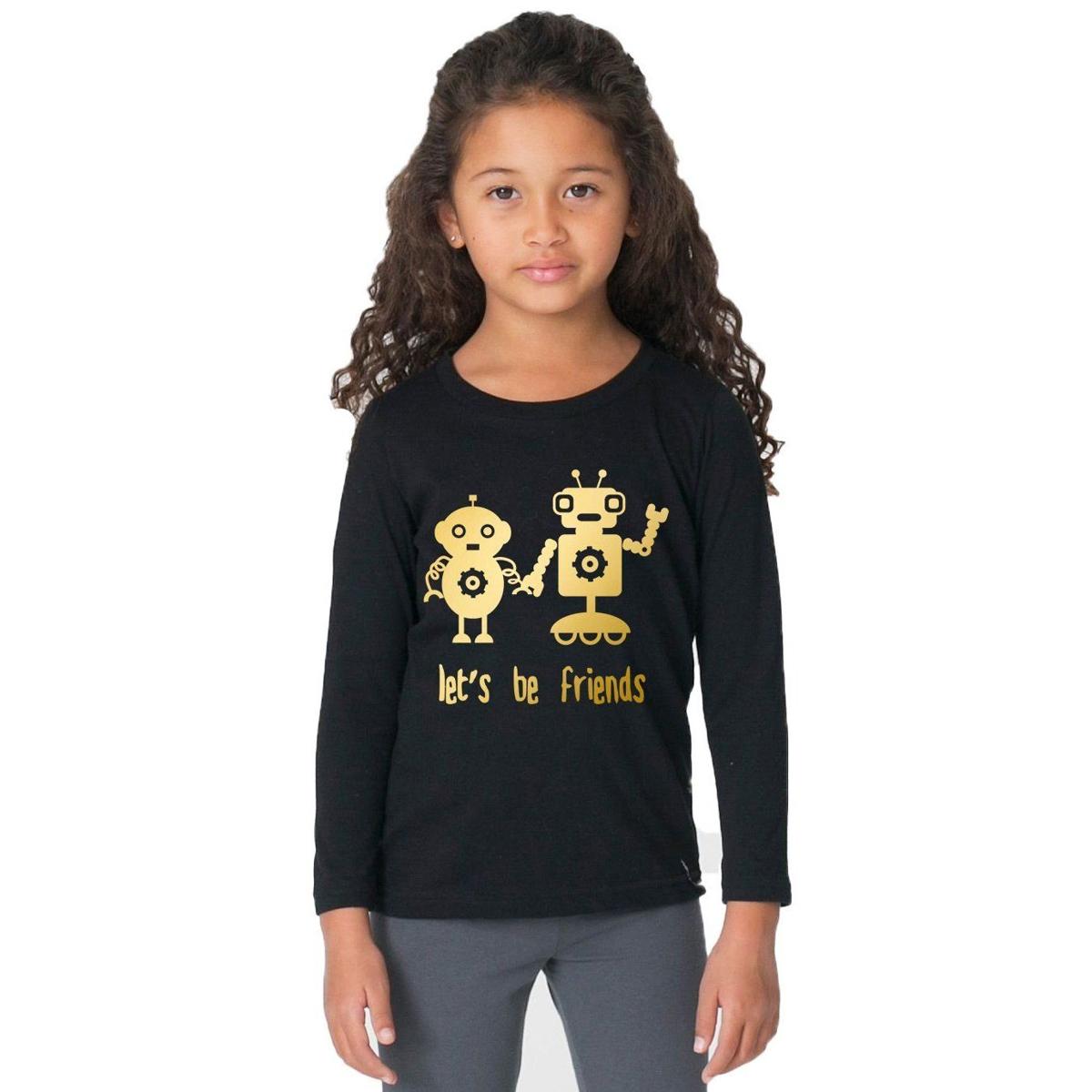 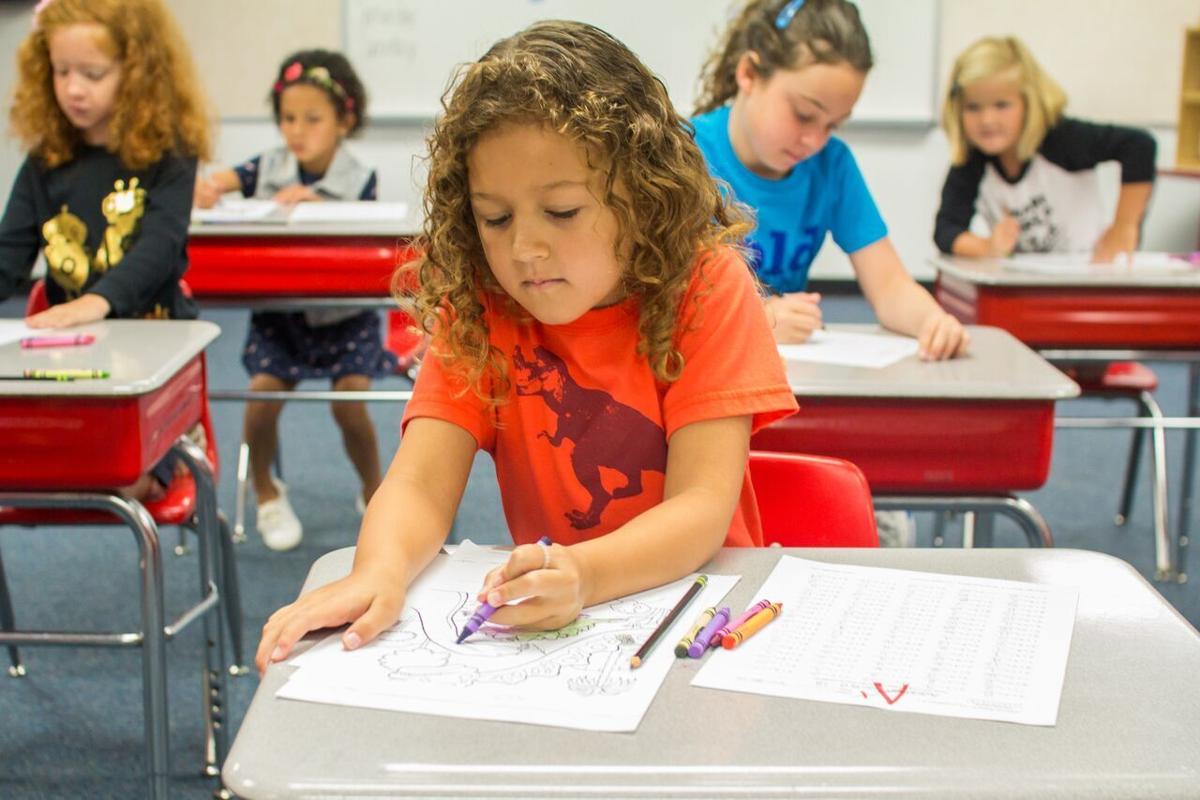 Her Jack & Jill kids shirt said, "Half of all T. Rexs were Girls". 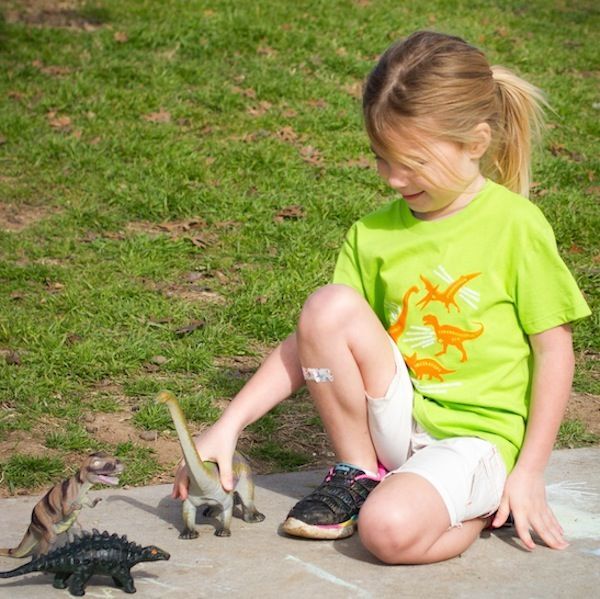 Girl plays dinosaurs with Girls Will Be shirt. 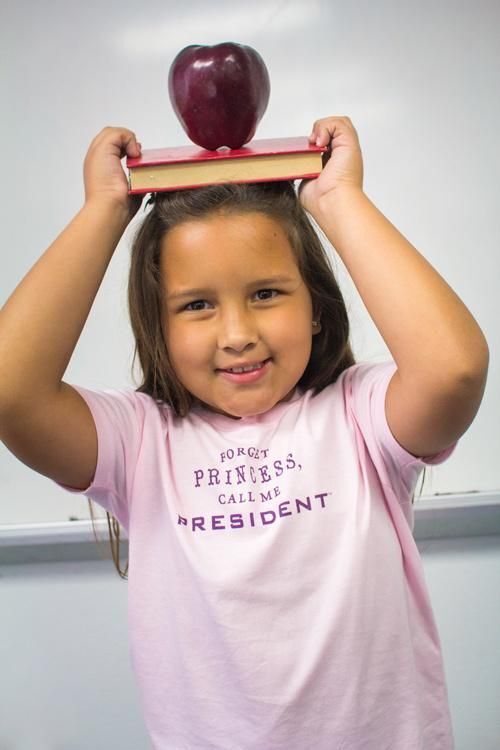 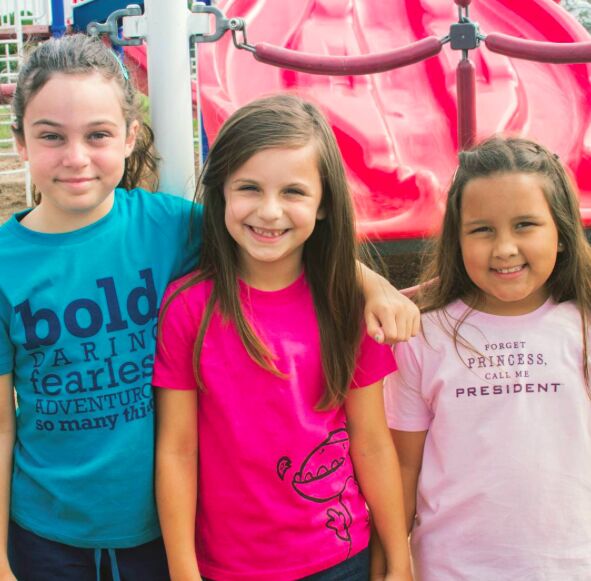 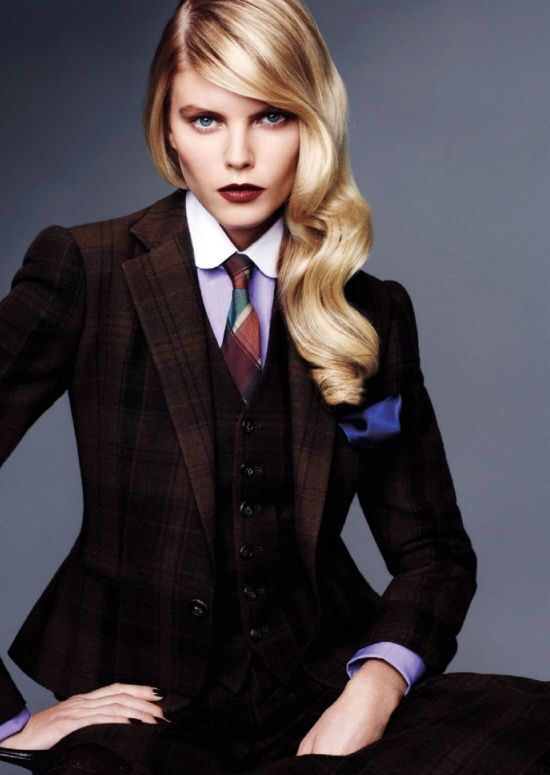 Though it's a fun gender twist in adult women's fashion, finding a suit for a young girl is impossible. Michele Yulo wanted to fix that. 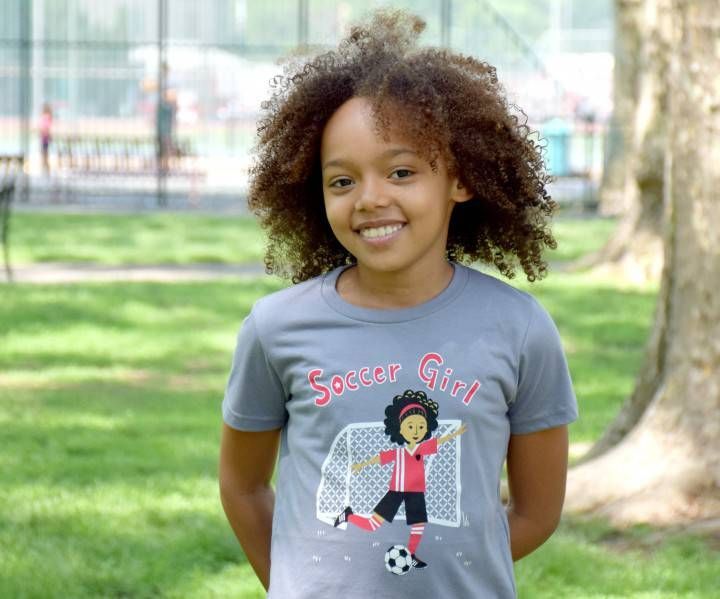 EDITOR’S NOTE: This article was corrected and updated with information on how the group has grown since its launch. The hashtag is #ClothesWithoutLimits. An earlier version of this story had an incorrect hashtag. More information can be found at clotheswithoutlimits.com.

We tell girls that they can be anything, but we question them if they don’t want to be stereotypically girly. A small group of entrepreneurs is fighting back against clothing that enforces rigid gender stereotypes, but fight isn’t the right word. Why in the world does it matter if a 4-year-old girl wants a blue T-shirt? But seriously, go try to find one.

United under the campaign hashtag, #ClothesWithoutLimits, started with 10 companies mostly operating out of their garages and living rooms are devoted to giving girls options beyond pinks, purples and yellows, lace, flowers and sparkles. The group now includes 17 members and counting.

No one can pinpoint exactly when it happened, but mainstream girls departments now seem vigilantly pinkified and really sparkly.

Launched by concerned parents, none of these #ClothesWithoutLimits business owners planned to jump into a clothing revolution. Each acted because they have young girls who were confused by what they saw in the girls’ department.

Jennifer Muhm’s daughter wanted to be an astronaut for Halloween a few years ago, but she was immediately discouraged. “I can’t be an astronaut; that’s a boy’s costume,” her daughter said.

Muhm, speaking by phone from Seattle, said that the words were devastating. Her daughter was 4 years old and already she thought she couldn’t be anything she wanted to be. She was already thinking this is for girls and that’s for boys.

In a press release, Muhm’s business partner Malorie Catchpole said, “Little girls pick up on messages in the clothing department. When girls don’t see dinosaurs, space and other science themes on their clothing, it tells them that things like science and engineering aren’t for them.” As early as 5, girls learn to think that they aren’t as good at math as boys, according to studies, even though testing shows that this isn’t true at that age. However, many argue that the perception affects future interest and performance.

Luckily, Muhm was able to discuss this with her daughter. She showed her images of female astronauts and scientists and persuaded her daughter to dress up in a spacesuit and helmet. You can see the adorable results in a video on her company’s website, buddingstem.com. But Muhm thought, what about the girls who don’t even ask because they never think of science or space because it’s not something they think of as being “for girls”?

Muhm and Catchpole launched their buddingSTEM clothing line after a successful Kickstarter campaign this spring. They attracted more than $70,000 in donations and purchases, and they started shipping their first items last week — T-shirts, dresses and leggings with patterns of rocket ships, trains and the Apatosaurus (formerly the Brontosaurus although the Brontosaurus is coming back, but that’s a long story and a great one to teach to girls and boys, hint, hint).

After talking with friends and family, the duo said that they knew there was a market and a need. They’ve fulfilled more than 1,300 orders all over the country, including many bundles to St. Louis, and they have hundreds more to go before fulfilling all their Kickstarter packages. They even have adult women clamoring for the space-themed shirts and tights (but sorry, ladies, this is for kids).

The buddingSTEM company is a long way from making a profit, but this is a labor of love, Muhm said. She’s a public affairs officer with a public health organization, and her business partner is a lawyer specializing in regulatory compliance. They have three children under 6 years old between them, so this is what they do in their very limited spare time, and it speaks volumes to their dedication and frustration over girls’ clothing choices.

The St. Louis siblings behind Girls Will Be, girlswillbehq.com, are also part of this campaign. They launched their line two years ago to give girls an option to sport a shirt with a robot, a baseball, a math equation or a dog that wasn’t bedazzled with rhinestones. They introduced items in the unheard of girly hue of navy blue.

Sharon Choksi, a Girls Will Be co-founder, said that companies selling only clothing with pinks and sparkles becomes a self-fulfilling prophecy.”They say they make it because it sells, but that doesn’t hold water because it’s the only thing they sell” and everything else is somehow considered deviant, she explained.

Choksi lives in Austin, Texas, but her sister Laura Burns, who designs the shirt graphics for the company still lives in Webster Groves and their brother who is also part of the company lives in Chicago.

Choksi said that after a few years, her son wears the product as much or more than her daughter and she’s thrilled.

“Clothing is the next frontier in changing gender inequities,” Choksi said. She said that by forming a mini coalition of companies under #ClothesWithoutLimits they are helping redefine what it means to be girly and to be a girl.

{{tncms-asset app="editorial" id="cbe1bcc6-6ded-11e5-b449-00163ec2aa77(/tncms-asset)Michele Yulo is also part of the campaign. Her daughter is 10 years old and she loves wearing suits and ties. The only thing that gave Yulo pause about her daughter’s sartorial choice, which she committed to at an early age, was the fact that she knew her daughter would have to answer rude questions, especially when she also decided that she wanted a very short buzz cut.

“But I didn’t want her thinking why do I like boy things, I wanted her to know that she could make that choice as a girl if she wanted,” Yulo said speaking from her home in Atlanta. The question she wanted her daughter to ask is why can’t a girl wear these. However, she had to prepare her for the reactions she might get from others.

“I don’t like the term tomboy,” Yulo said. “We need to find ways for kids to express themselves freely without feeling alienated or feeling different.”

Yulo said her daughter did feel different, but she’s thankful that didn’t stop her.

Yulo recently ended a Kickstarter campaign called Suit Her. It would have been part of her Princess-Free Zone company. The campaign wasn’t successful, but she’s planning to regroup. The concept was simple blazers, pants and skirt suit sets for young girls, an item that is impossible to acquire. If you want a suit for a young girl to wear to a formal occasion (the need for her daughter to wear something to a wedding inspired Yulo), you have to have something custom-made. That’s an unreasonable expense for most parents. Or parents could shop the boys’ department and have it tailored.

That’s not a message Yulo thinks young girls should have to consider. She doesn’t want her daughter thinking that she’s making some radical choice to wear a suit, dress shirt or tie.

“Marketing has really exploited gender for profit,” Yulo said. “I really think it stunts their imagination when they are watching commercials and girls and boys are rarely playing in the same ad with the same toy.“Her daughter isn’t shy about going into the boys department to find something she likes. For instance there’s a Nike sports shirt that simply says, “All I do is win,” that she loves. That wasn’t available for girls, even though Nike might be doing a better job than most at marketing sports to girls. “But lots of parents won’t go into the opposite gender department for their kid,” Yulo said. “They think it means something.”

Yulo just wanted her daughter to feel comfortable making whatever clothing choice she wanted. Yet over the years, she has endured online commenters questioning, accusing and criticizing her over the presumed sexual preference of her child. At the time, her daughter’s age was still in the single digits. It was and is a preposterous discussion.

“Gay is at the core of a lot of the fear that people have about their kids,” and what they wear or play with, Yulo said. “But even if you take a doll away from a boy, it isn’t going to change anything. He might just like the doll because he likes the doll; it doesn’t mean anything. I want to tell people that they aren’t going to change their kid by enforcing strict gender stereotypes.”

And that’s what this #ClothesWithoutLimits revolution is about. Showing kids that girls can be girls without fitting into some narrow expectation.

Muhm was in the boys department and found a fabulous space-themed robe that she bought for her daughter. Her daughter instantly fell in love. It was everything she didn’t know she wanted. But Muhm didn’t tell her it came from the boy’s department because it would have made her daughter skeptical of it.

“I just said this is a supercool space bathrobe, and she loves it,” Muhm said.

{&rule}Find out more about the members of the #ClothesWithoutLimits campaign at clotheswithoutlimits.com. and find out about efforts at Gap in partnership with Ellen DeGeneres to create a line for girls who are redefining girly.(tncms-asset)e4437d02-6df4-11e5-b89f-00163ec2aa77"}}

Free to Be Kids, freetobekids.com 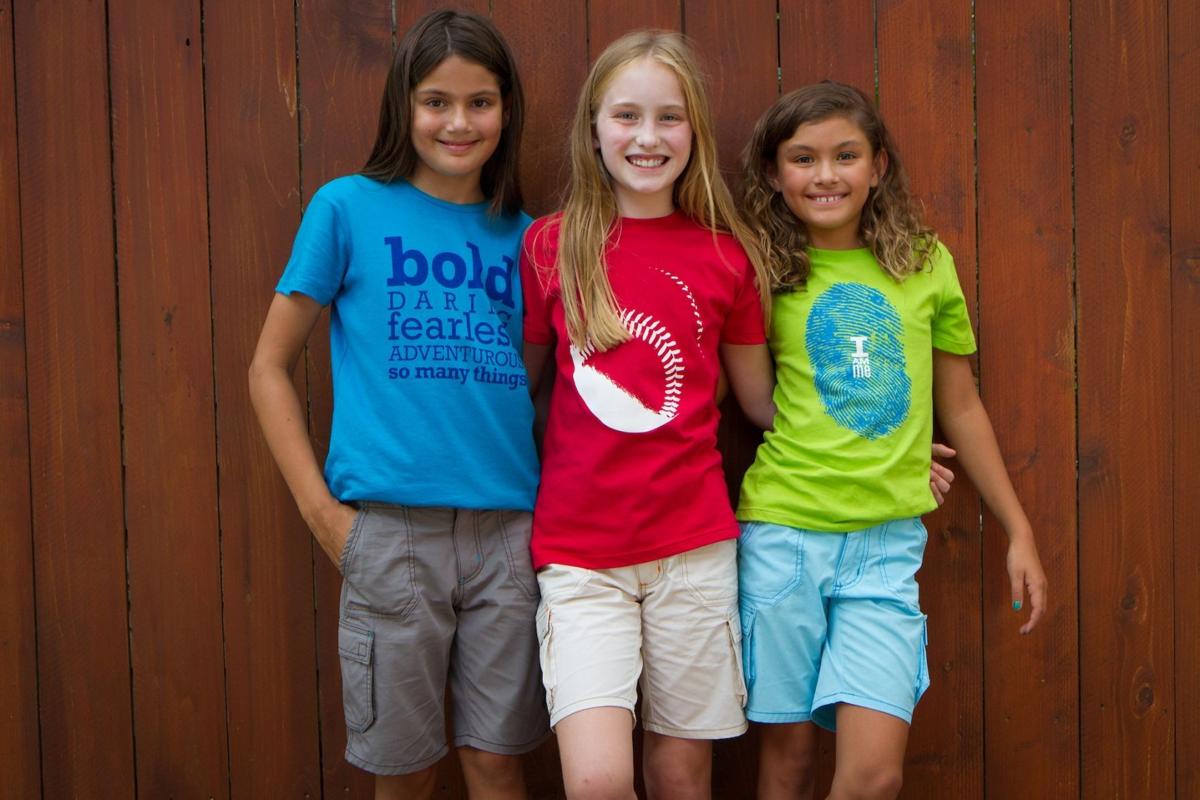 Some looks from Girls Will Be, launched by St. Louis siblings. They wanted clothes for girls who wanted shirts that reflected their interest in math, science, books, sports, dinosaurs and other girly things.

Her Jack & Jill kids shirt said, "Half of all T. Rexs were Girls".

Girl plays dinosaurs with Girls Will Be shirt. 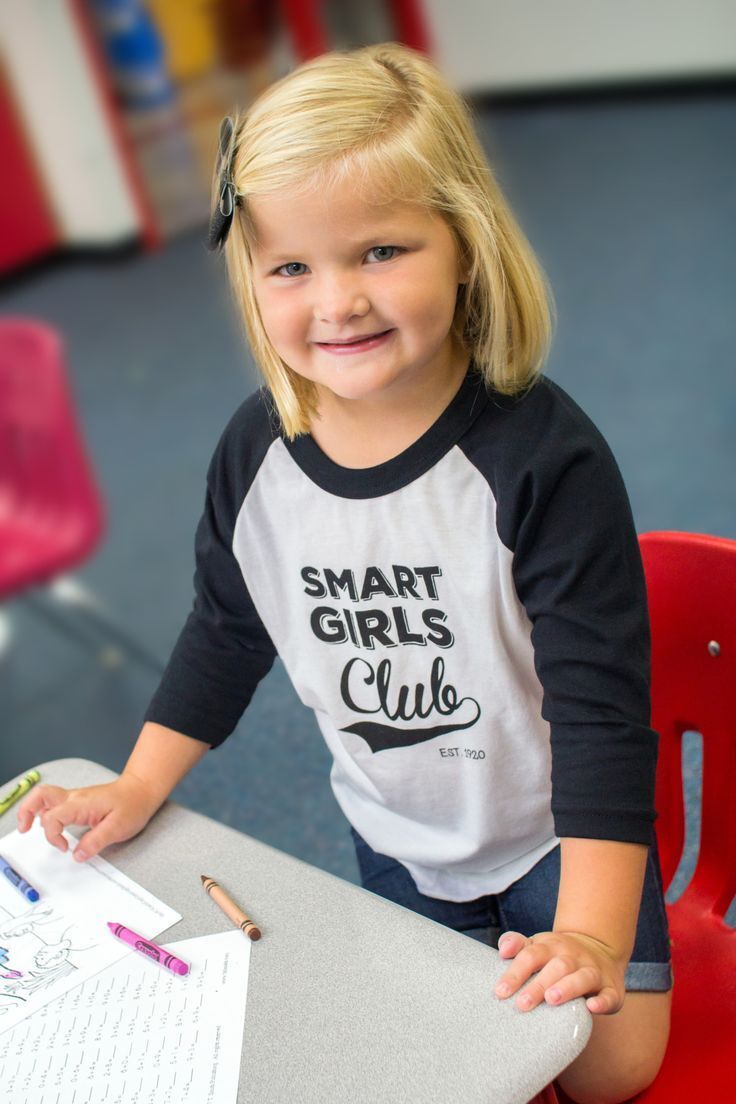 "Smart Girls Club" shirt from the Free to Be Kids. 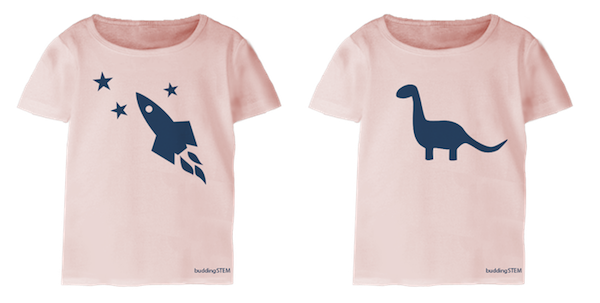 buddingStem had the radical notion that both boys and girls might like shirts celebrating rocket ships and dinosaurs.

Though it's a fun gender twist in adult women's fashion, finding a suit for a young girl is impossible. Michele Yulo wanted to fix that. 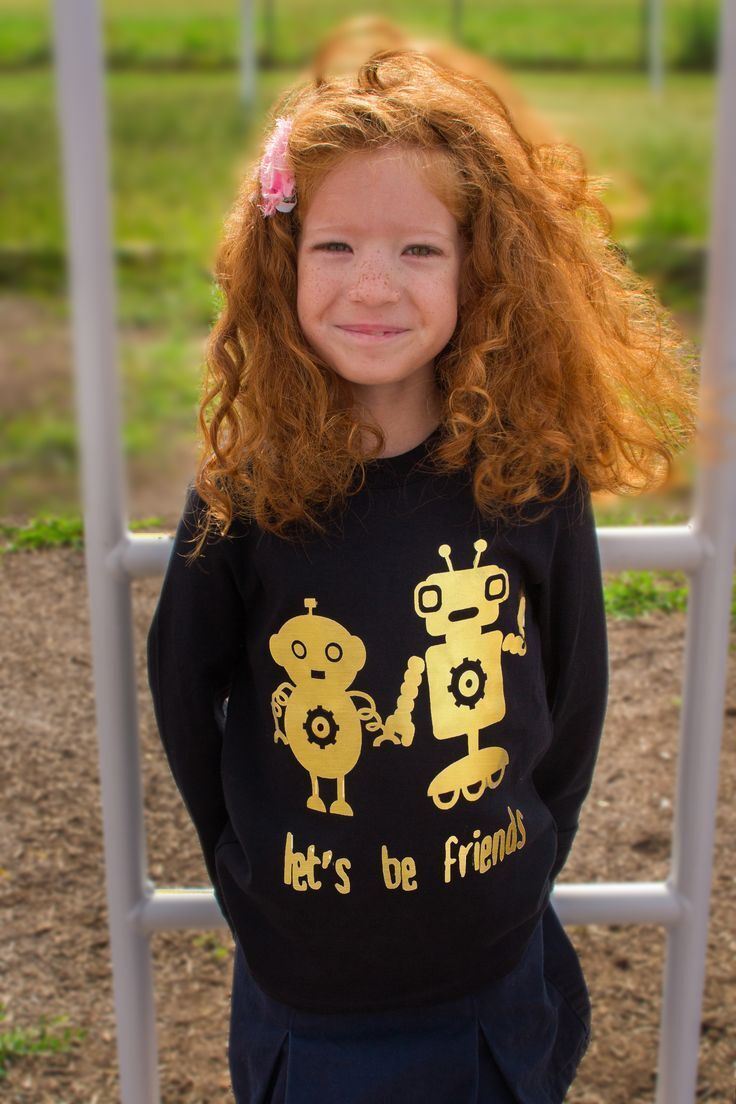