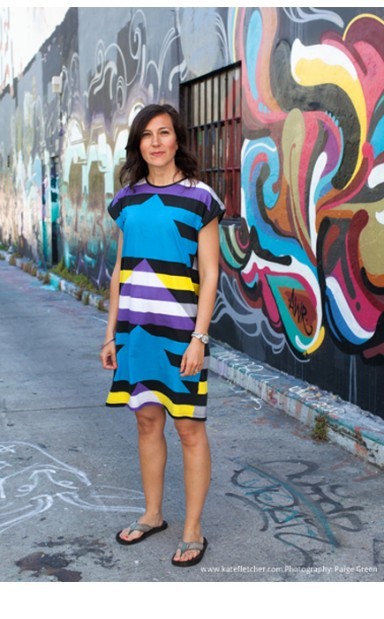 Kate Fletcher of the London College of Fashion and founder of "slow fashion" movement. 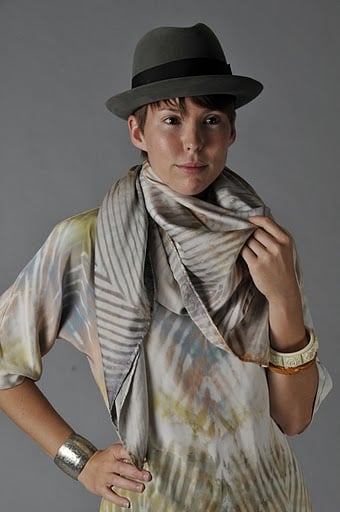 Katie Kantley models one of her hand-dyed scarves and tops. 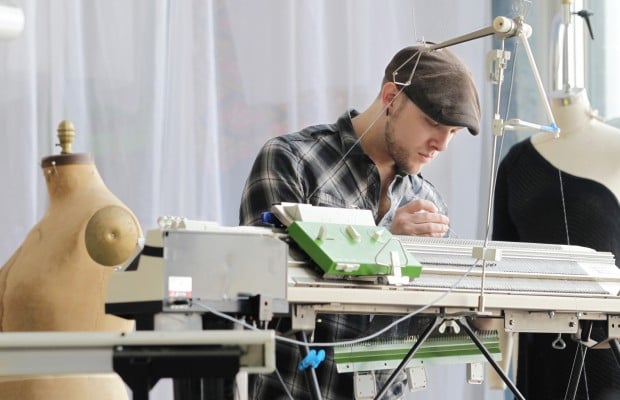 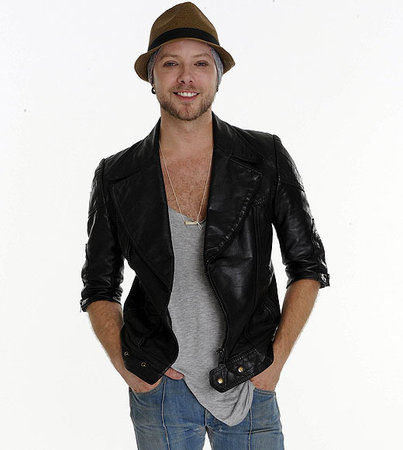 Visiting lecturer Kate Fletcher presented a cogent lecture on the uncomfortable topic of fashion and sustainability.

It's hard to sit in an audience while literally wearing the source of environmental devastation on your back. But Fletcher, a consultant, author and design activist, is not one to point fingers.

We live in a consumer society, after all. It's normal, she said, to exchange money for garments. It's normal for them to look out of date in about six months. It's normal to get rid of something, instead of repairing it.

Normal ... and yet unsustainable.

Having just returned from fashion week in New York after watching dozens of shows featuring thousands of garments vying for the attention of department store buyers, conservation is a confusing dichotomy.

We could all probably make due with what we own for years without need for anything new, but fashion empires would collapse. The ripple effect of crushing a multi-hundred-billion dollar industry would be devastating.

Talk about too big to fail.

But Fletcher quietly asks if it's worth it. Is there a better way, a better system? Can we sustain fashion and the environment at the same time?

Surprisingly, she noted that a key problem is that we're not materialistic enough. We do not revere our clothing. We want it fast and cheap and therefore disposable.

One interesting suggestion was to buy what you love and only what you love and to covet what you have. She said that she buys about one thing a year. A confession that must have made the students longing for a prosperous career in fashion design gasp.

But imagine how special that one thing would have to be. Imagine the care you'd take if you had such restrictions. Imagine the amount you'd be willing to pay for something so in tune with your personal esthetic that you waited a year to find it.

She is a pioneer in the field of eco-fashion and a founder of the "slow fashion" movement. For the past 20 years, she has helped shape the field of fashion, textiles and sustainability.

Want more to ponder? Head over to the Local Wisdom Project: Exploring 'The Craft of Use' at www.localwisdom.info

As part of Fletcher's visit The Fashion Lab is presenting Eco-centric: A Green Fashion Show, in collaboration with Laumeier Sculpture Park.

Kantley is a textile artist who creates hand-dyed scarves, jackets, and other women's apparel using the ancient Shibori process that is native to Japan. Sign up to make a scarf with Kantley at her Sept. 22 workshop. Cortinovis merges contemporary design and traditional production, using fashion as a tool for preserving cultural traditions and fostering sustainable economic growth. Drummond uses scrap, discarded and vintage materials to construct his artistically dynamic garments.

Kate Fletcher of the London College of Fashion and founder of "slow fashion" movement.

Katie Kantley models one of her hand-dyed scarves and tops.