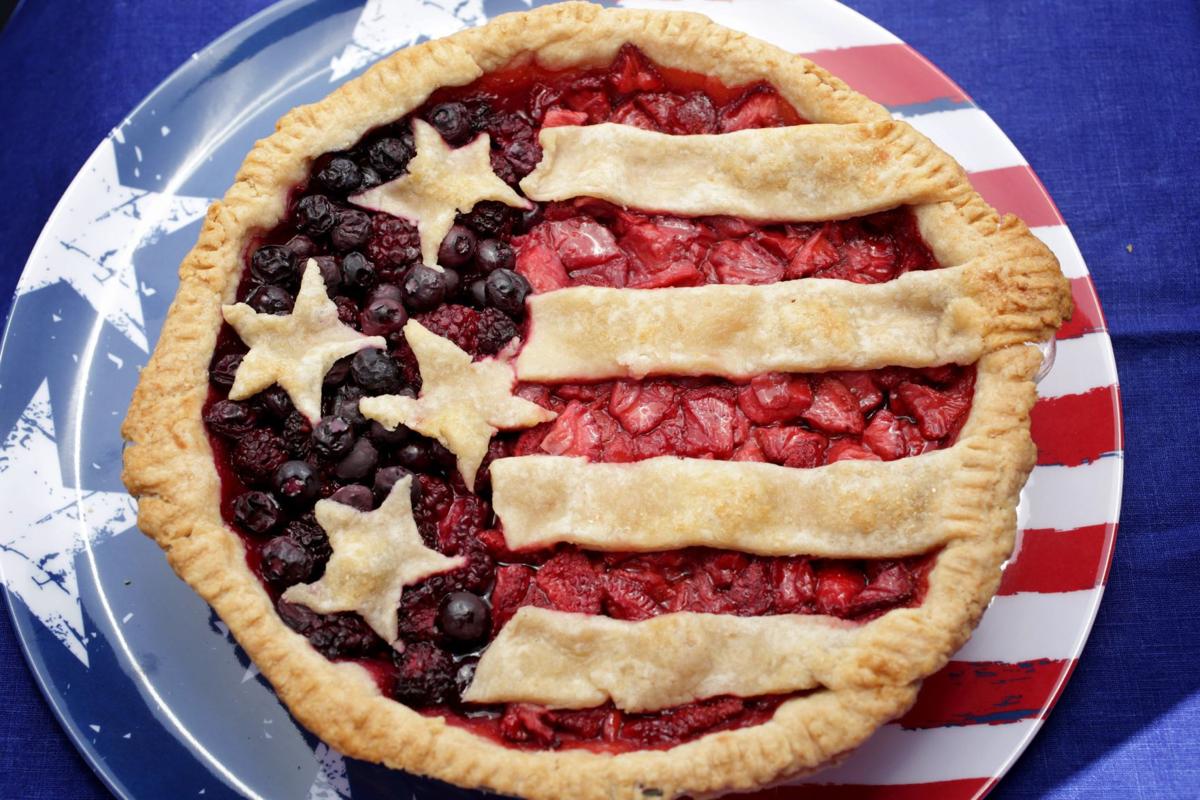 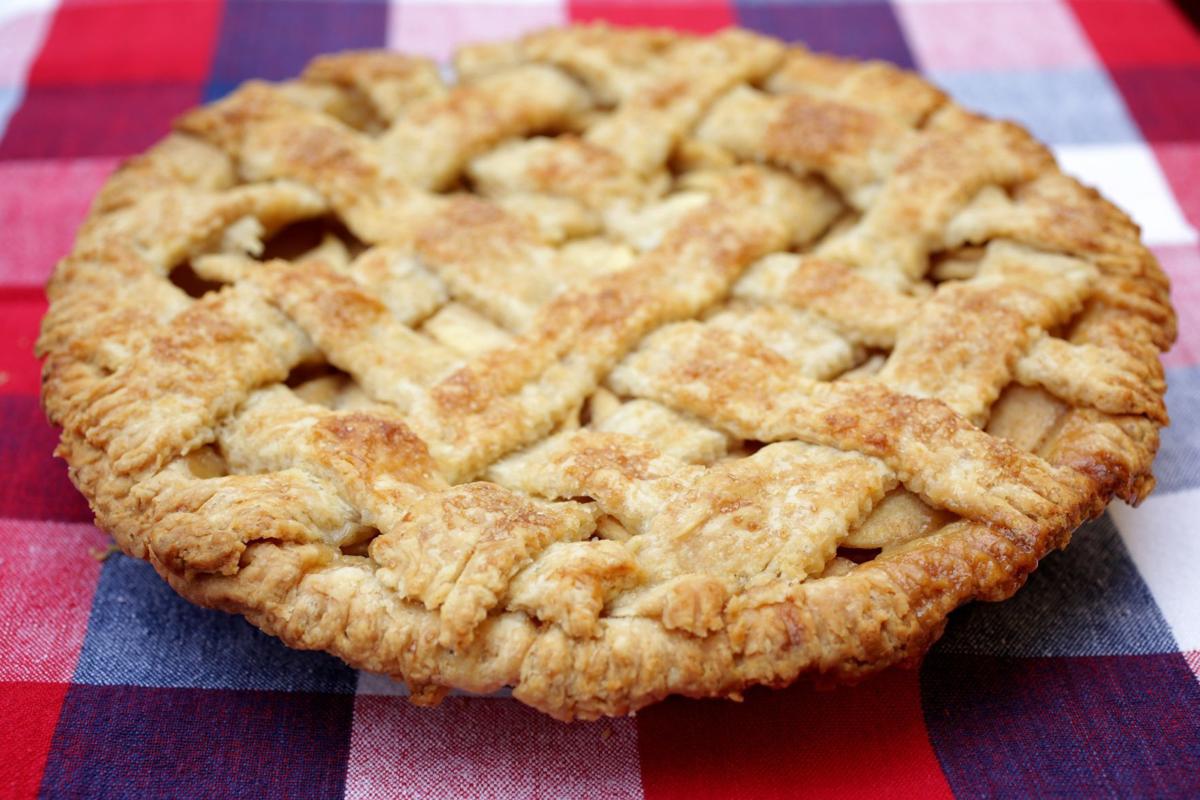 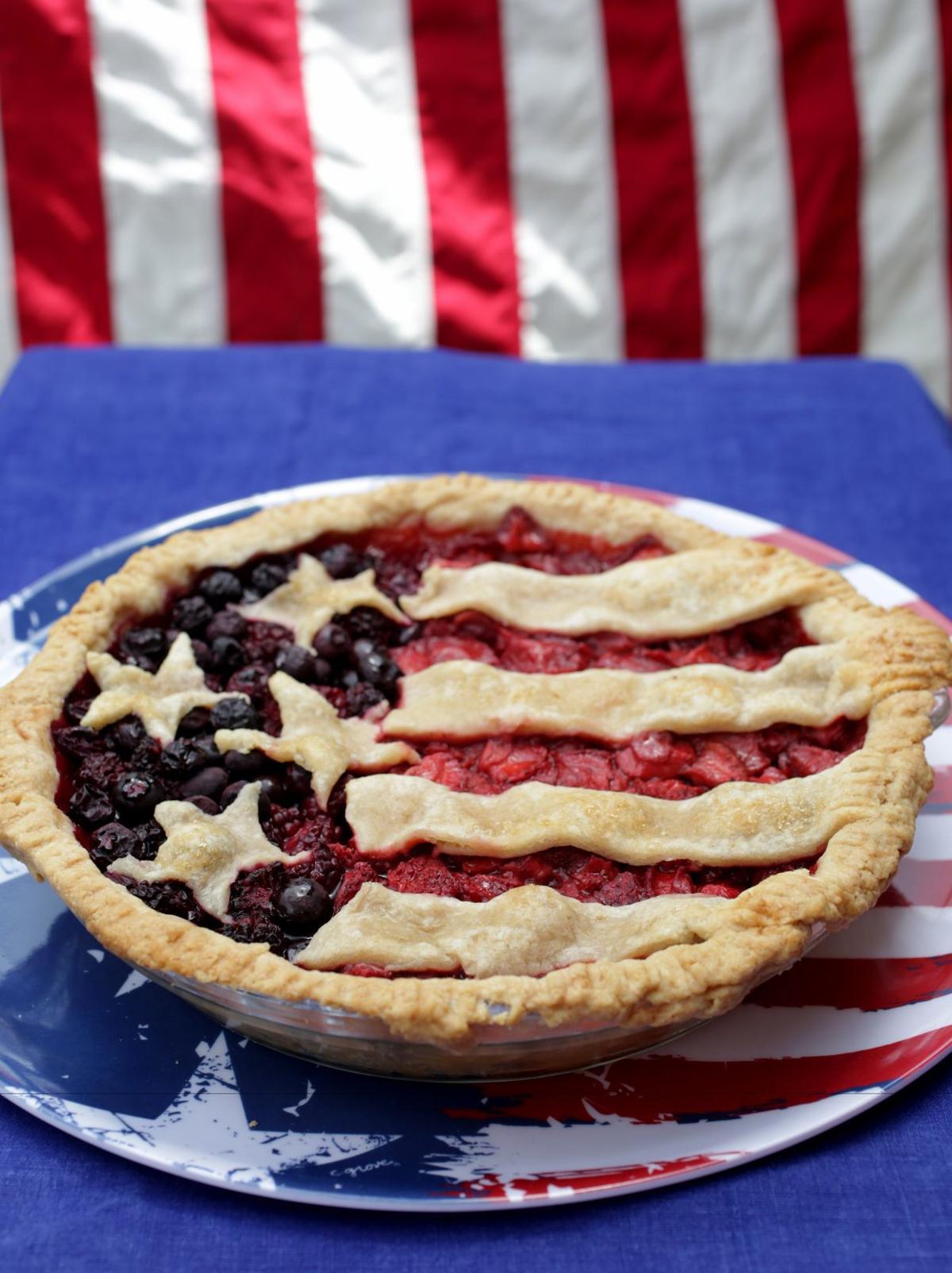 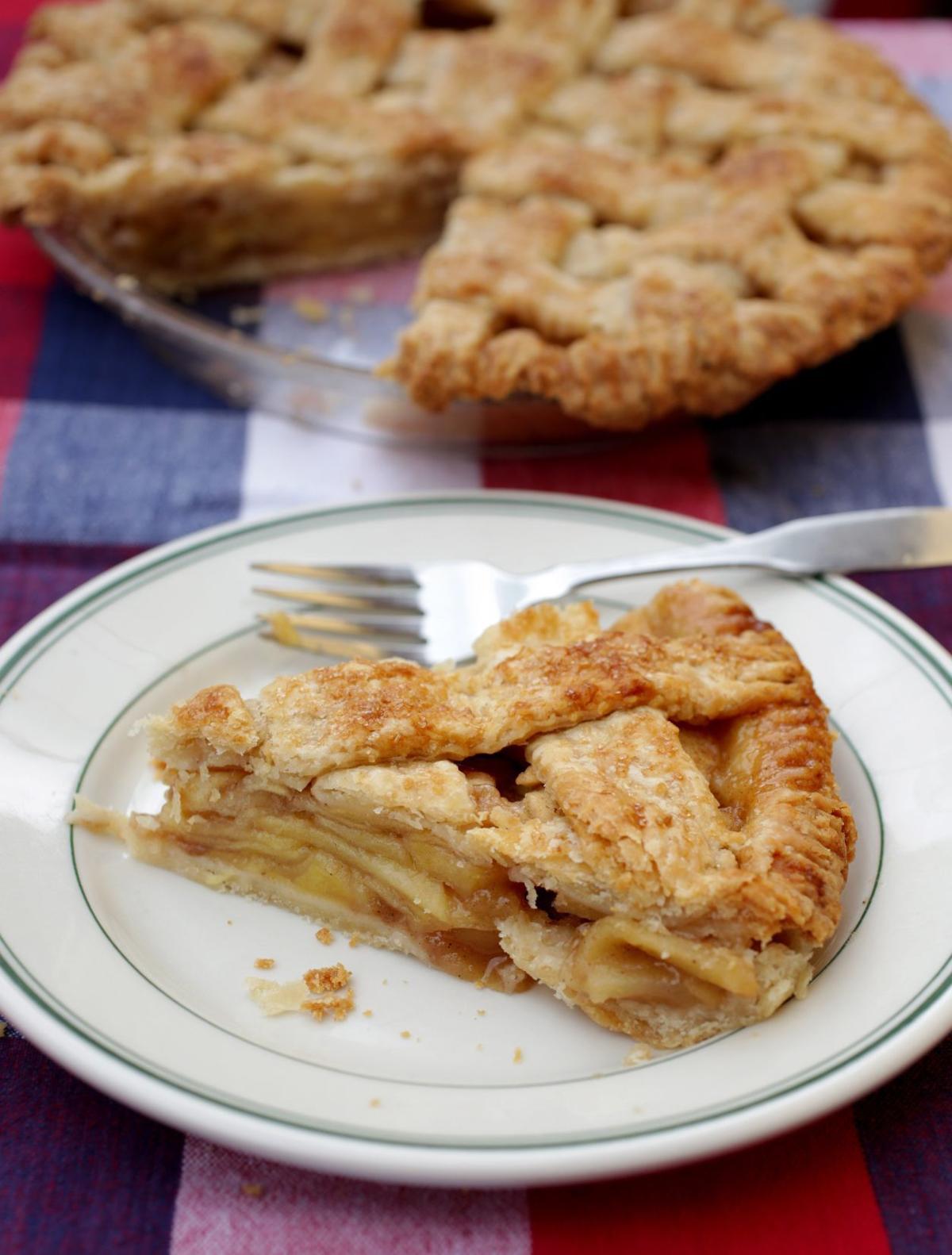 A slice of apple pie for a 4th of July celebration, photographed June 10, 2020. Photo by Hillary Levin, hlevin@post-dispatch.com 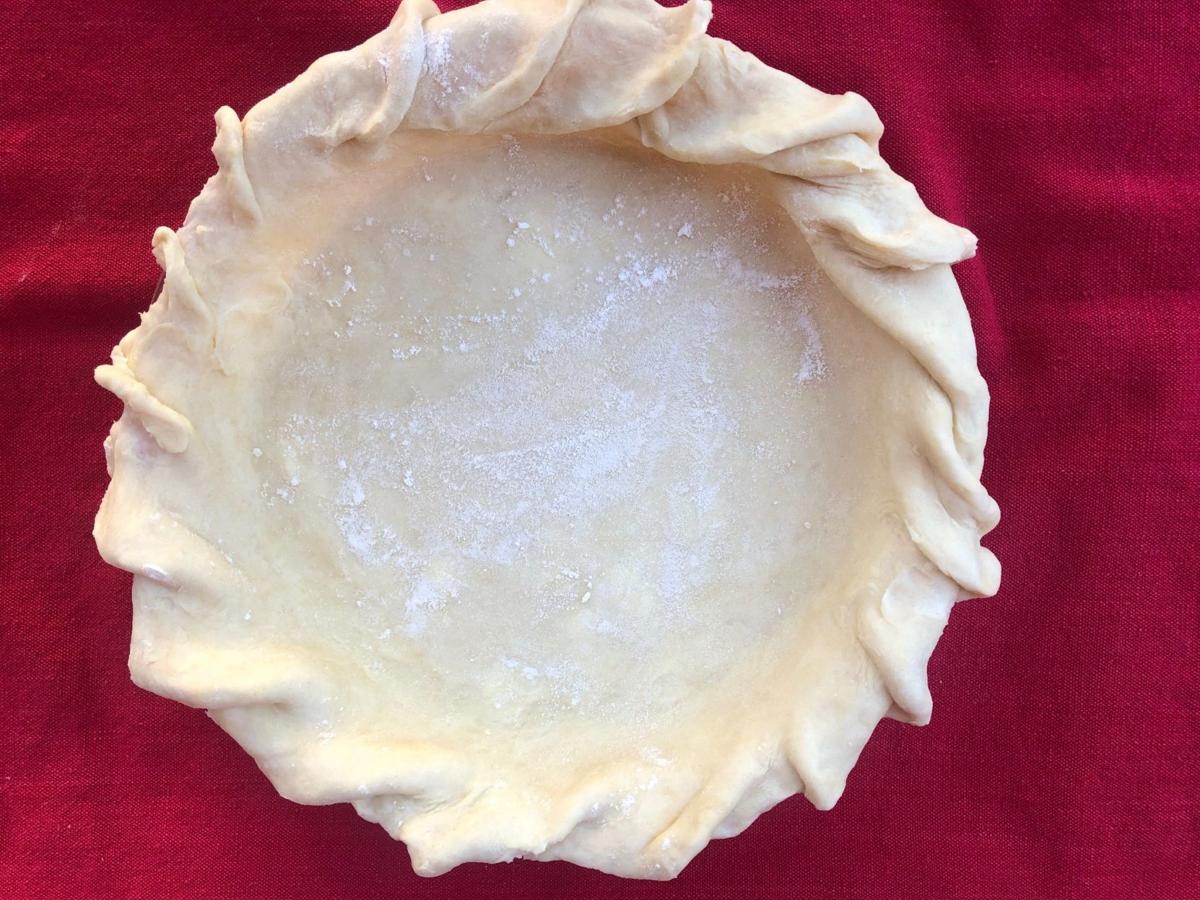 This pie crust uses butter and shortening to make it both flaky and flavorful.

Celebrating the Fourth of July? That's as American as apple pie.

So why not celebrate it with an apple pie? It is the quintessential American dessert — it goes along, as the commercial used to say, with baseball, hot dogs and Chevrolet.

Except, as with a lot of American foods, it did not originate in America. In England, in fact, they say something is "as British as apple pie," and they have a better claim to the boast. The first known recipe for apple pie was English and dates back to 1381.

"Tak gode Applys and gode Spycis and Figys and reyfons and Perys and wan they are wel ybrayed colourd wyth Safron wel and do yt in a cofyn and do ye forth to bake wel," it said.

If I may put the class I took on Chaucer to good use for the first time ever, I'll attempt a translation: Take good apples and good spices and figs and raisins and pears, and when they are well chopped and colored with saffron, put it in a double pie crust and bake well.

So apple pies are British. Fine. Wasn't that why we fought the American Revolution? To escape the tyranny of King George III, for representation in government and for the right to claim apple pie as our own?

So if you're feeling patriotic this Independence Day, celebrate with an apple pie. And if apple pie is not to your taste, you can always be a little showier about your patriotism with a stunning American Flag Pie.

An American Flag Pie is a delicious representation of the American flag, with a field of blueberries or blackberries, red stripes of strawberries and white stripes and stars made of crust.

With any pie, the crust is the thing. For my Fourth of July pies — apple and flag — I wanted to make the best crust I possibly could.

I have always used butter; given the choice between flavor and texture, I will pick flavor every time. But then I ran across an idea put forth by Julia Child and Ina Garten and, I'm sure, grandmothers everywhere: using a mixture of vegetable shortening and butter.

It was a revelation. I can't imagine why I'd never thought of it before.

I used Ms. Garten's recipe, which calls for a little more than twice as much butter as shortening. It was the best crust I'd ever made. It may be the best crust I've ever eaten — buttery and flaky and oh so good.

And now, if I may, I'd like to make a confession. Although I love pie more than perhaps any other food in the world, except doughnuts, there is only one kind of pie I do not like: apple.

And yet, I thought it was my patriotic duty this year to make apple pie. And I'm glad I did because, like the crust I baked it in, it was the best apple pie I'd ever had.

I used a recipe for the filling from the King Arthur Flour people precisely because it used two ingredients that I had not even thought of for apple pie, but they turned out to make all the difference — vanilla extract and apple juice concentrate.

With the addition of the vanilla and the apple juice concentrate, you know you are eating an apple pie. Even those of us who ordinarily do not like apple pie will help themselves to another slice. I certainly did.

The American Flag Pie is a berry pie, which I love, but the way it looks is easily as important as the way it tastes. There are several versions of the pie roaming wildly throughout the internet, so I chose the one that looked the best.

The recipe comes from Sally's Baking Addiction, a food blog that has at least spawned a few cookbooks. It calls for the simplest possible strawberry and blueberry fillings; the only hard part is cutting the stars out of the crust. And even that isn't hard if you have a small star-shaped cookie cutter.

I do not have a small star-shaped cookie cutter. But I just cut a small star out of cardboard and used that as a template to make my stars.

It turned out great. It looked patriotic. And if you feel a little hesitant to eat a pie in the representative form of a flag, just remember it is a British thing and dig in.

Getting pickled: 7 recipes that don't use cucumbers

Everyone sort of assumes it is the chicken. Everyone thinks that the process of pickling was invented as a way of preserving food in a time lo…

Clementine's lava cakes are fudgy goodness in a small bite

Baking them takes very little time; the recipe uses just six ingredients, the techniques are demanding but not impossible, and the results? Pretty spectacular.

The clock is ticking.

What's fresh at the farmers market this week

This cereal inspired by the Disney+ (and Emmy-nominated) show “The Mandalorian,” could have tasted like dust, and I would not have cared. Seei…

The clock is ticking.

A slice of apple pie for a 4th of July celebration, photographed June 10, 2020. Photo by Hillary Levin, hlevin@post-dispatch.com

This pie crust uses butter and shortening to make it both flaky and flavorful.