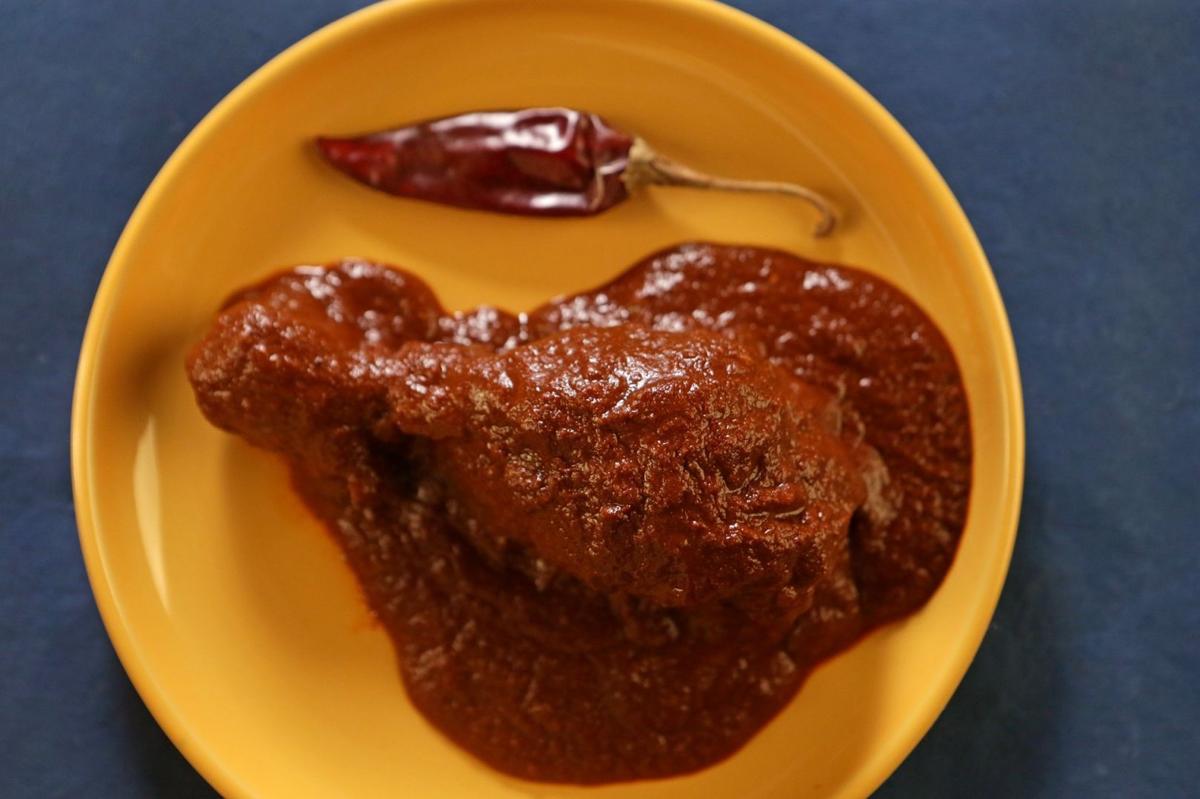 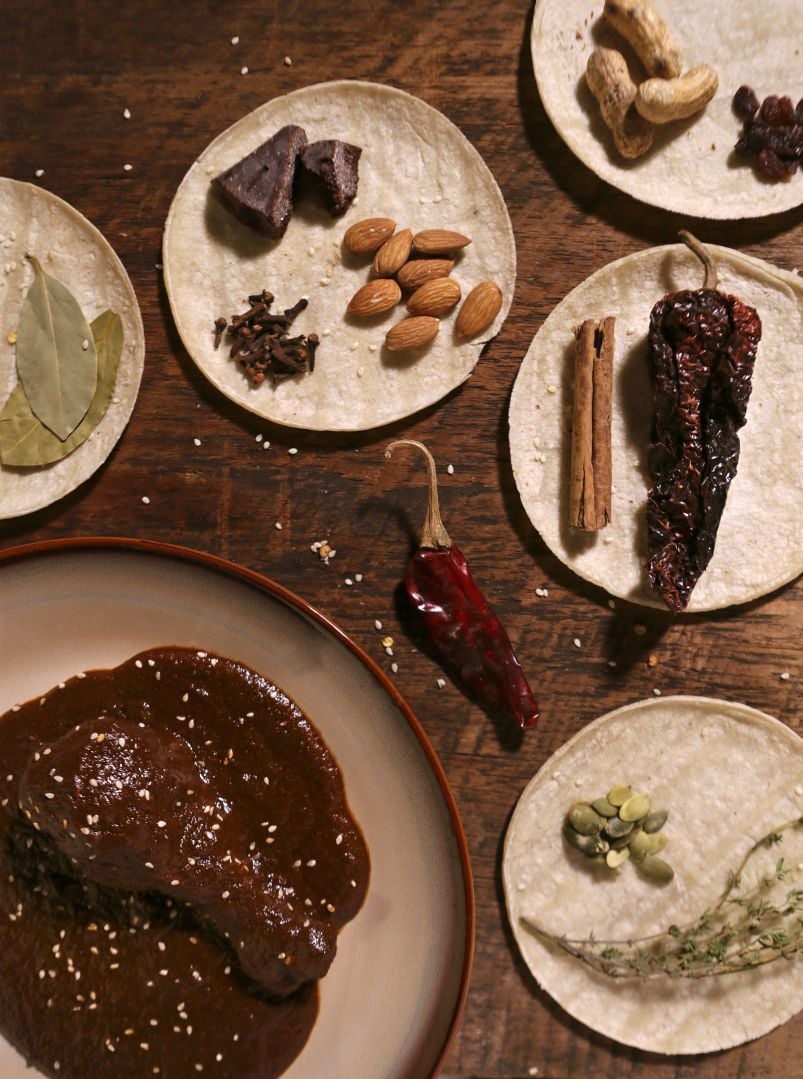 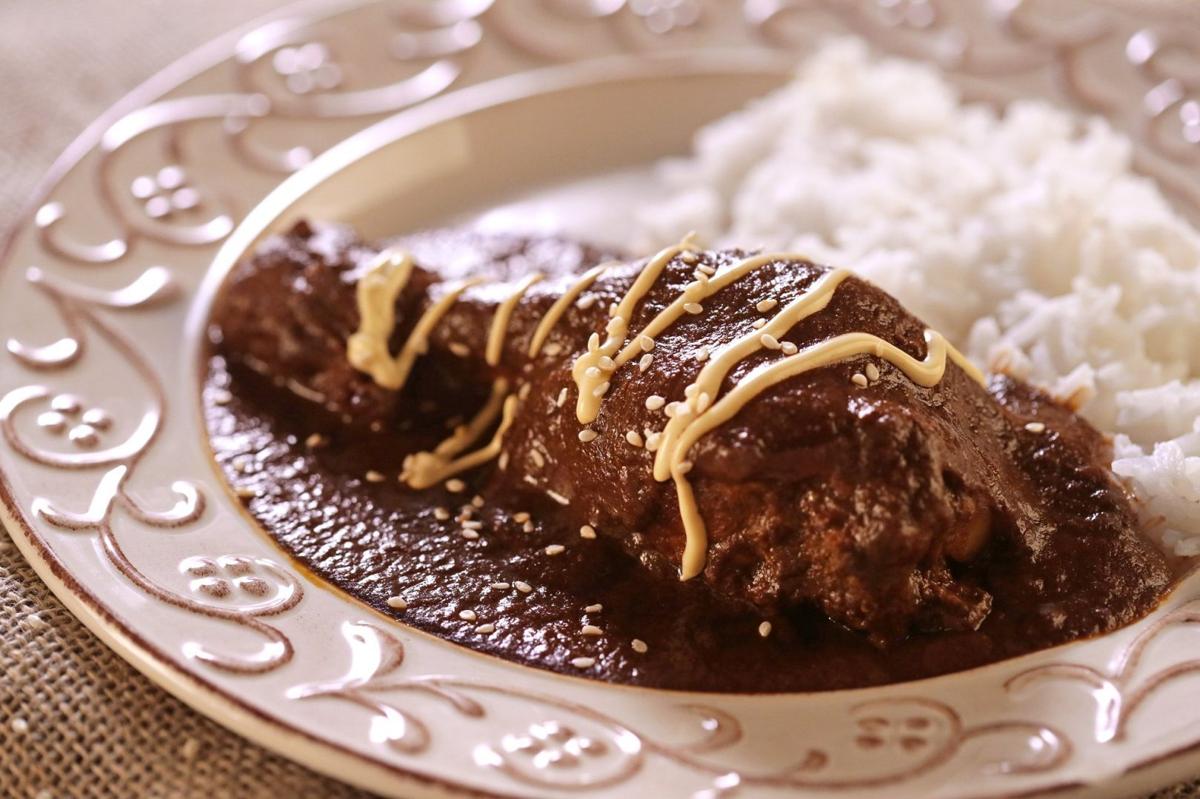 If you find yourself in Beverly Hills, Calif., you should head a couple of blocks south of Wilshire Boulevard to a restaurant called Frida for some mole poblano that is out of this world.

Mole poblano is a traditional deep-colored, richly textured sauce from certain parts of Mexico that may date back as far as 500 years. It is the type of food that legends are made of, a dish that can inspire courage in the timid and true love in the heartsick. It is the sort of dish that condemned prisoners request for their last meal.

So remarkable is mole poblano that I still remember the first time I had it. It was 1985, at Tula’s restaurant in Austin, Texas. The mole at Tula’s was excellent, but it wasn’t as spectacular as the one at Frida.

I once asked the folks at Frida what made their mole so extraordinary. They said they make it with 36 ingredients.

When making mole poblano, numbers matter. Properly made, a mole is a true melange, a whirling combination of subtle flavors so expertly balanced that no single taste is identifiable. It is a case of the sum being greater than the whole, with each ingredient adding a key layer that joins with the others to create a kind of multiplier effect. Individually, the ingredients are good by themselves, but taken together they are sublime.

The problem with making a mole poblano for yourself is that the results improve in proportion to the number of ingredients used. The amount of time it takes is also important: Longer is better. So making a really excellent Mole Poblano in your own kitchen can be a challenge.

I set out to make the most complicated, most time-consuming recipe for Mole Poblano that I could find. Recipes with, say, 25 ingredients? I scoffed. Recipes requiring six or seven quick steps? I snorted derisively. I was going for 30 ingredients or more and at least 10 steps to put it together. At least.

I found my challenge in the (electronic) pages of the Los Angeles Times, with a recipe created by Jaime Martin del Campo and Ramiro Arvizu of Cenaduria La Casita Mexicana restaurant. The same article, incidentally, carried a recipe for green mole served at Frida. I had the green mole at Frida once, and I didn’t care for it as much as I did the mole poblano, but I took that as a good sign.

Another good sign is that it requires 32 ingredients — the list and proportions looked very promising — and 14 distinct steps to make. Plus, it took four hours to make, not including shopping (unless you cook a lot of traditional Mexican meals, you are not likely to have all the ingredients in your pantry) and a night’s worth of soaking dried chiles.

I also decided to test my theory that the more ingredients and steps to make a mole, the better. So I looked for an easy version of mole poblano, and this is what I discovered: Even the easy versions aren’t easy. Recipes that go so far as to call themselves “easy” will include a good 15 to 20 ingredients. The one I picked has 13 ingredients, and I feel like I got off lightly.

So I also decided to test these two recipes against the easiest method of all, opening a jar of mole paste from the store, mixing it with stock and serving it over chicken.

First, the harder version. This dish is most distinguished by the use of five different types of dried chiles, though one of them is optional. Each with its own flavor and characteristics, these form the base on which all of the other flavors are constructed.

Into this base goes the expected ingredients — cloves, cinnamon, Mexican chocolate, pepitas (pumpkin seeds), peanuts, almonds, raisins — and a few unexpected ones, including anise and coriander seeds. The mixture is thickened with a fried bolillo roll and tortilla, and simmered until it is a rich, dark brown. Chicken pieces are poached halfway in a homemade stock and then finished in this sauce for maximum flavor.

The taste is incredible. It is astonishingly complex, with one subtle layer after another revealing itself in turn on the palate. You could never guess all or even most of the ingredients that go into making it; you can only marvel at their combined perfection. Who cares if it takes half a day to make it? This is the kind of dish that is worth any effort.

It’s great as a main course, but don’t overlook the opportunity to do a little snacking on what I call Mole Nachos Cristina. Take a tortilla chip — it’s best if you’ve fried it yourself, but don’t forget to salt it — and add a dollop of crema (a Mexican sour cream) and another dollop of the mole sauce. Delicious.

The relatively easy version of mole poblano comes from Jim Peyton, the author of several Mexican cookbooks. His version uses only one type of chili, ancho. That means much of the complexity is gone right there, and many of the spices that are used even in small amounts in the harder version are also missing. And some of the cooking techniques that allow the flavors to meld and mature have also been bypassed in the service of speed and ease of making.

The result is a mole that is more of a song than a symphony. It is a pleasant enough song, for what it is, and it uses less of your wallet and your time. But once you’ve had the real thing, the relatively easy version seems like a half measure. Though it is perfectly fine and would make a satisfying dinner for your family, it is a tepid replica of something bold and powerful and startlingly delicious.

But at least it is homemade, right? For my final version, I opened a jar of Doña Maria mole paste (available at many grocery stores), thinned it down with chicken stock and served it over chicken with rice on the side.

Not only is it not bad, it is decidedly good. It took a few minutes to make and cost about $1 per serving, plus the chicken.

While the stuff in the jar is enjoyable enough, it isn’t in the same league as the real thing done in the time-honored, laborious method. That mole may take a lot of time and effort, but it is easier than flying to Beverly Hills.

Cities that spend the most on residential construction