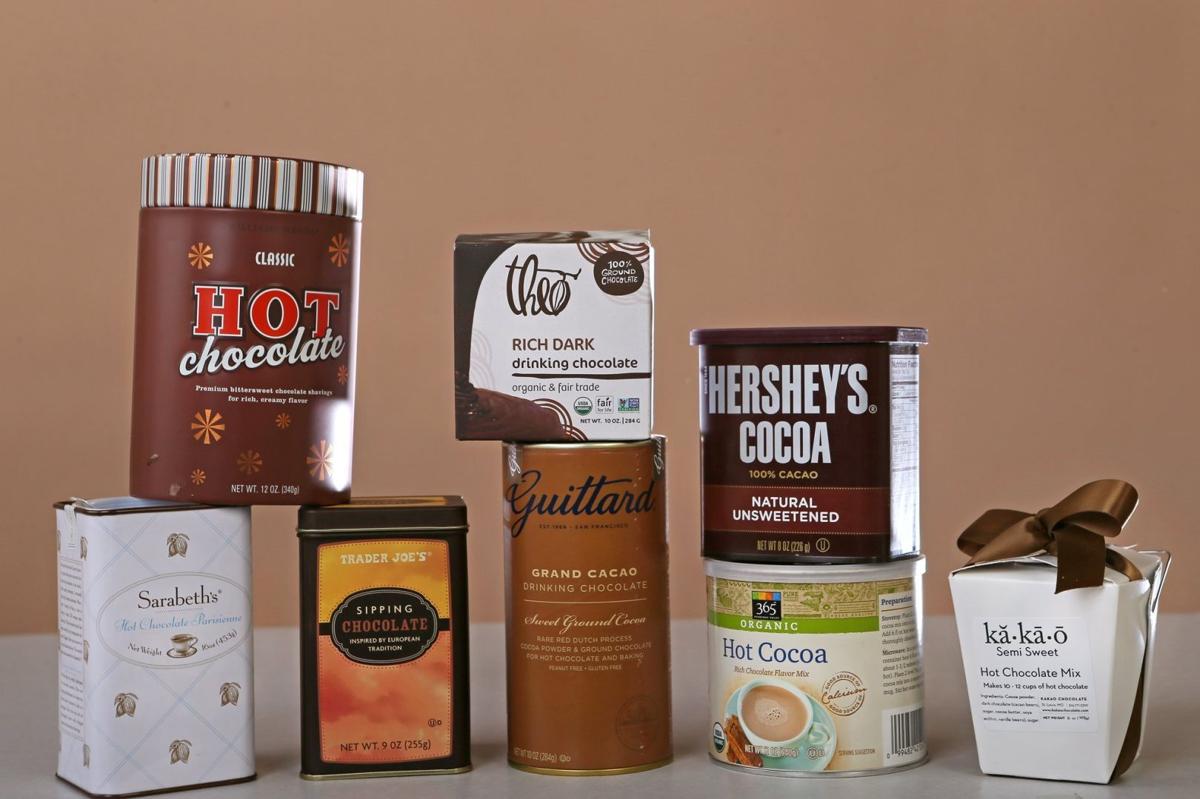 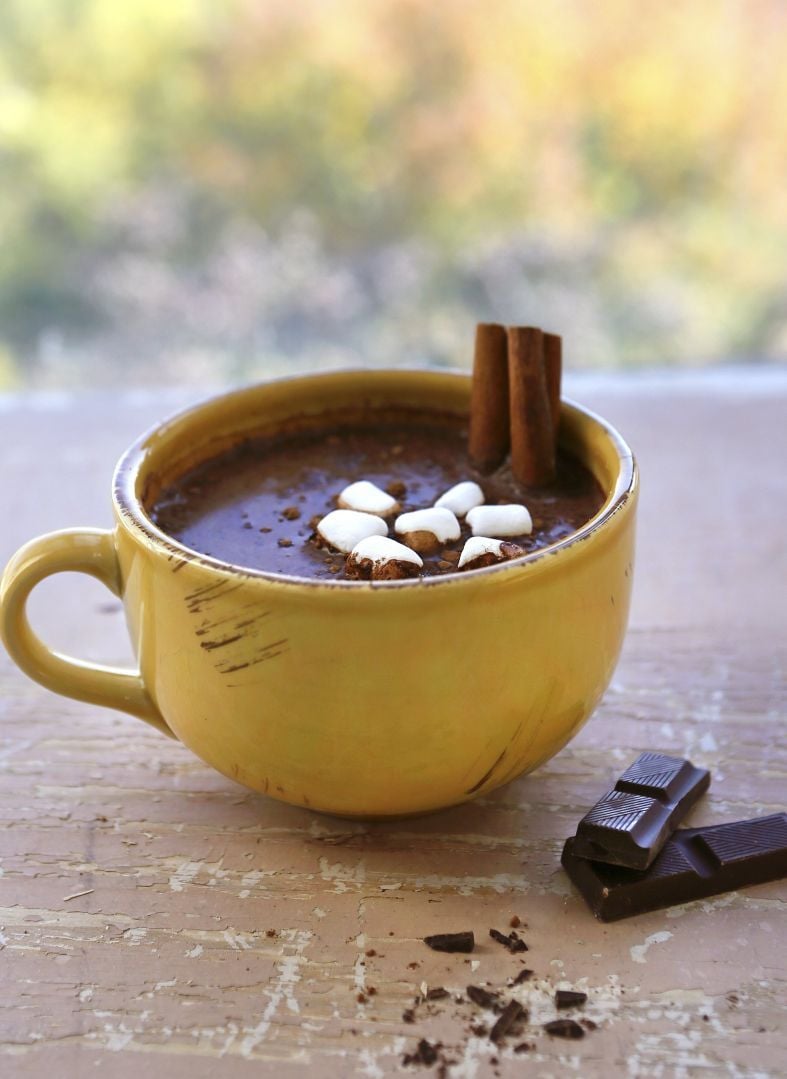 A mug of hot cocoa on Wednesday, Oct. 22, 2014. Photo by Cristina Fletes-Boutte, cfletes-boutte@post-dispatch.com

Let us pause in our busy lives and pay homage to a great man, a man of science, a man of ideas: Sir Hans Sloane.

Sloane, who lived from 1660 to 1753, was a man of many accomplishments: He developed an early method of classifying plants; he collected objects that initially made up the bulk of the British Museum.

But most importantly, he invented hot chocolate.

People had been eating and drinking chocolate for more than 1,000 years, but no one made it deliciously creamy until Sloane, who was 27 when he journeyed from England to Jamaica. He tried the local drink of chocolate mixed with hot water, but found it unappetizing. After some experiments, he discovered (or popularized) a method of mixing it with milk, and we have been drinking hot chocolate ever since.

The entire marshmallow industry owes him its eternal gratitude.

With a bow of our own toward his final resting place in London, we set out to determine the state of Sir Hans’ invention in the 21st century. Specifically, we held a taste test to determine the finest example of hot chocolate available in the area, out of an admittedly small and random sampling.

For the sake of our test, we decided to try hot chocolate, cocoa and drinking chocolate, as most people use the three terms interchangeably anyway. Hot chocolate is ground cocoa powder mixed with sugar and dry milk, so it is mixed with hot water instead of hot milk. With cocoa, about half of the cocoa butter is removed before the roasted beans are turned into a powder (Dutched cocoa adds alkaline salts to make it dissolve easier).

Drinking chocolate, which is also known as sipping chocolate, is a European concept that has only recently made its way to our shores. It is simply a combination of chopped chocolate — some places just use chocolate bars — blended into hot milk.

For the purposes of our taste test, we had to find a number of volunteers who would try all the different hot chocolates. As you can imagine, this was not particularly hard to do. But by the time the seventh or eighth cup of hot chocolate came around, the testers were starting to feel a bit logy. The wimps.

Our taste tests led to several definitive conclusions. One is that cost is by no means an accurate way of predicting which version will be liked the most. Another is that people who prefer milk chocolate to dark also prefer their hot chocolate to be sweeter. And a third conclusion, though presumably of little importance to anyone, is that if you grow up drinking Swiss Miss hot chocolate, it will remain forever your ideal hot chocolate.

Unfortunately, I could not track down my favorite hot chocolate of all time, MariBelle Aztec Hot Chocolate, which is richer than you can possibly imagine. It is like drinking velvet. It is ridiculously expensive, but Amazon sells it if you can’t find it at a store.

We sampled nine different hot chocolate mixes, or rather eight mixes with one prepared in two different ways. Our rankings follow, from best to worst. The rankings are entirely my own, and they obviously reflect my preference for dark chocolate over milk:

1. Trader Joe’s Sipping Chocolate. A rich, intense chocolate flavor coats your teeth (and your tongue) in a good way, the result of using relatively little milk with the chocolate mix. Our testers who prefer milk chocolate found it too strong and not creamy enough, and several called it “thick.” Everyone agreed it should be consumed in small quantities (two testers suggested demitasse cups). It’s the espresso of the hot chocolate world. $3.99 for 9 ounces at Trader Joe’s.

2. Sarabeth’s Hot Chocolate Parisienne Tin. Rich and luxuriant on the tongue, as close as any of the drinks we sampled to my beloved MariBelle. I found that it had just the right hint of bitterness on top of the chocolate flavor, but the milk-chocolate lovers complained about the slight bitter overtones. One complained it wasn’t as sweet as Swiss Miss. The mix is unusual in that it is a combination of cocoa, sugar crystals and chocolate chips. $17.95 for 16 ounces at Sur La Table.

3. Williams-Sonoma Classic Hot Chocolate. A luscious mouthfeel almost helps to justify the price. Most of our testers raved — two of them compared it favorably to Swiss Miss — though a couple thought it was not sweet or chocolaty enough. It was the favorite of at least one tester, who praised its consistency and texture, as well as its taste. $21.95 for 12 ounces at Williams-Sonoma.

4. Hershey’s Cocoa, made the “Perfectly Chocolate” way. With a big chocolate taste, this is what you think of when you think of cocoa; it is just what you want to enjoy by the fire after a pleasantly toe-numbing day of sledding and snowman-building. Made with more milk and cocoa than the “Favorite” version, below, and the difference is notable. $3.79 for 8 ounces, available at grocery stores everywhere.

5. Guittard Grand Cacao Drinking Chocolate. An absolutely silken mouthfeel and a creamy chocolate taste made this one, from one of the biggest names in chocolate, a rich and smooth winner for me. But two of our testers described it as “chalky,” while two others though it was “acidic” or “acrid.” I suspect they were reacting to the faint bitterness of dark chocolate. Note: The constant whisking required while heating it can become burdensome. $5.99 for 10 ounces (the large canister is only half full) at World Market.

6. Theo Rich Dark Drinking Chocolate. This is small chunks of chocolate that are melted into hot milk. I found it quaffable; everyone else thought it was more for sipping. Some of the other tasters called it dessert in a cup (one said it was “like a melted ganache,” which, technically, it is), but a couple of them and I thought it lacked a certain complexity. A bit of vanilla would have helped; I actually enjoyed eating the rich chunks of dark chocolate by themselves more than mixed with the milk. $10.99 for 10 ounces at Whole Foods.

7. Kakao Hot Chocolate. We had high hopes for this local favorite, but it failed to leave much of an impression. It’s rich, but it was not chocolaty or creamy enough for our tasters, who also complained it was chalky. The bitter edge of dark chocolate was more noticeable than in some of the other mixes. $7.69 for 6 ounces at Local Harvest.

8. Hershey’s Cocoa, made the “Favorite” way. Weak, wimpy and watered down, with less of the chocolate mix, less milk and less sugar than when made the “Perfectly Chocolate” method (which is for one serving; the “Favorite” method serves six). This variation literally waters down the milk, and you can taste the difference. Why bother making it this way, from a recipe on the side of the container, when the results are much better from the recipe on the back? $3.79 for 8 ounces, available at grocery stores everywhere.

9. 365 Organic. The consensus loser by a long shot. Despite being organic, it tastes kind of fake; it’s way too sweet, with an overpowering and unpleasant flavor of vanilla. The vanilla (and also the milk) was dehydrated and then must be rehydrated with water; there is obviously a good reason why you don’t see that more often. “It’s like drinking a chocolate tea,” one taster said. This is the only mix to require water instead of milk. You’d be better off drinking the water. At least it’s cheap. $3.99 for 12 ounces (the large canister is only half full) at Whole Foods.

People at risk of heart disease advised to get flu shot

Survey: 1 In 2 adults still compete and argue with their siblings

Survey: 1 In 2 adults still compete and argue with their siblings

French onion soup from Brasserie by Niche is simple, satisfying

It’s not hard to make, and it is delicious. Be sure to start with a good chicken stock.

These Halloween cocktails are made with 'boos'

Seriously Simple: French pot roast warms you up on a chilly night

As with any slowly braised dish, this pot roast will benefit greatly in flavor if left to cool, refrigerated overnight, and gently reheated before serving.

EatingWell: When you don’t have time to cook, reach for this chili recipe

This rich and creamy chili comes together in a flash thanks to quick-cooking chicken thighs and canned white beans.

How to cook chicken thighs, 4 ways

Let’s make a deal: No more dry, tough, bland chicken breasts for dinner. Instead, it’s time to embrace moist, flavorful dark meat chicken thighs. Chicken thighs, readily available at most grocery stores with skin-on and bone-in, are an excellent value. Though price varies by region, these often sell at $2 per pound and can go as low as 89 cents per pound or less. The bones and skin lock in ...

With its bright cherry eyes and lime wedge ears this drink’s resemblance to the Child in "The Mandalorian" can’t be dismissed.

Even if you just look at southern Italy, you can discover delicious wines that might be totally unfamiliar.

This world-famous restaurant ditched meat, but it's still charging $335 a person. Will people pay?

The early reviews of the new EMP have largely not been positive. Some have even been downright scathing.

A mug of hot cocoa on Wednesday, Oct. 22, 2014. Photo by Cristina Fletes-Boutte, cfletes-boutte@post-dispatch.com