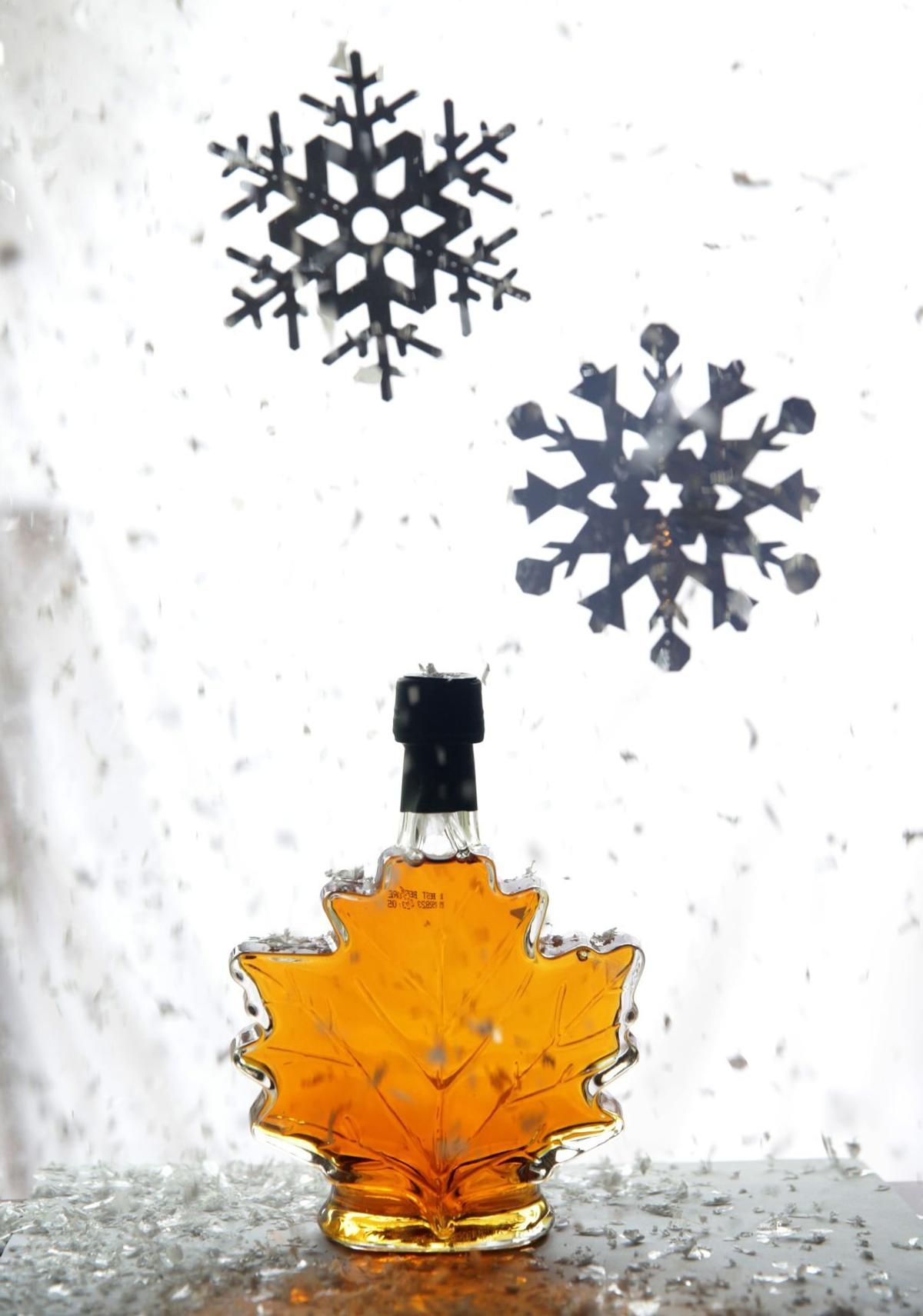 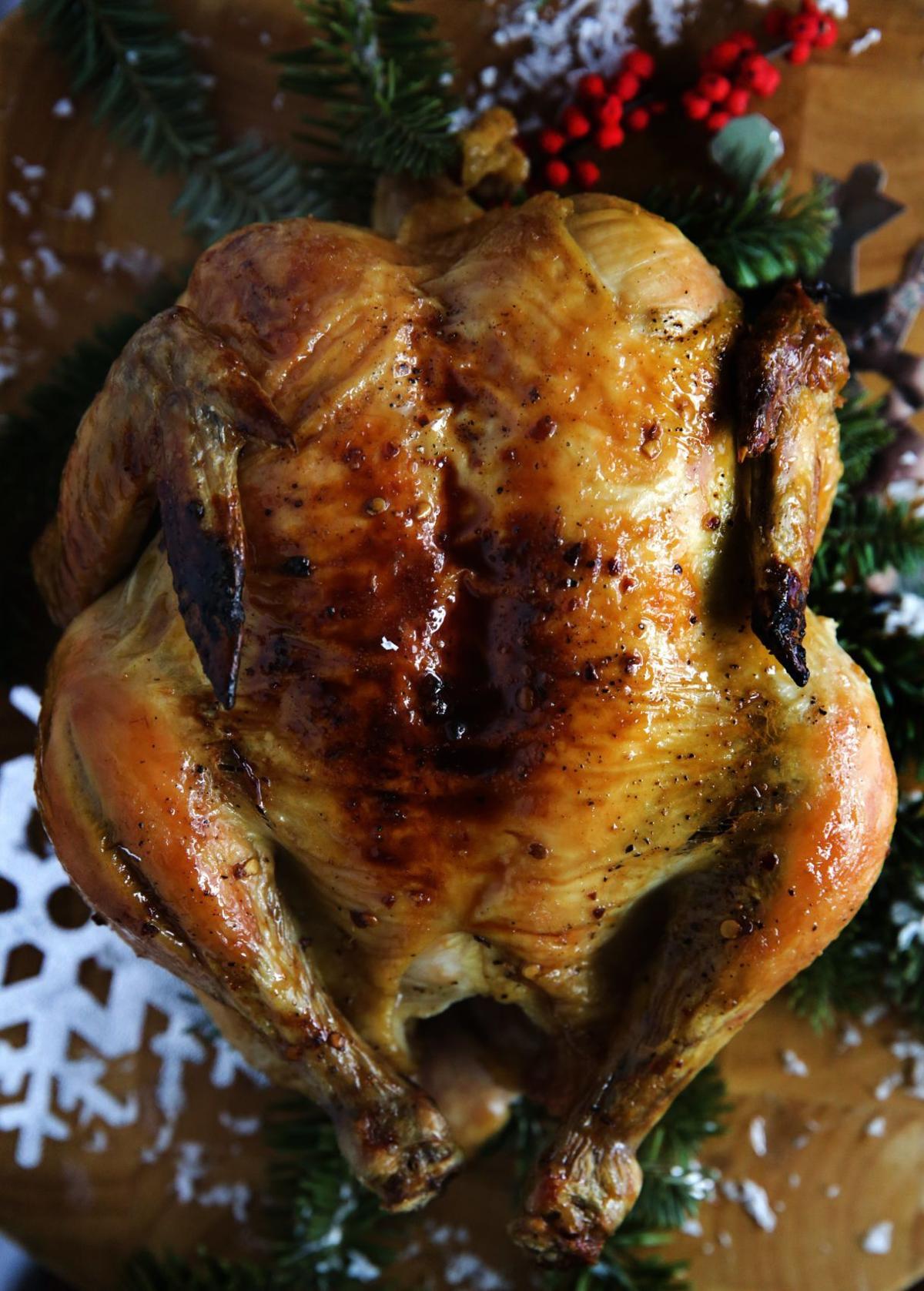 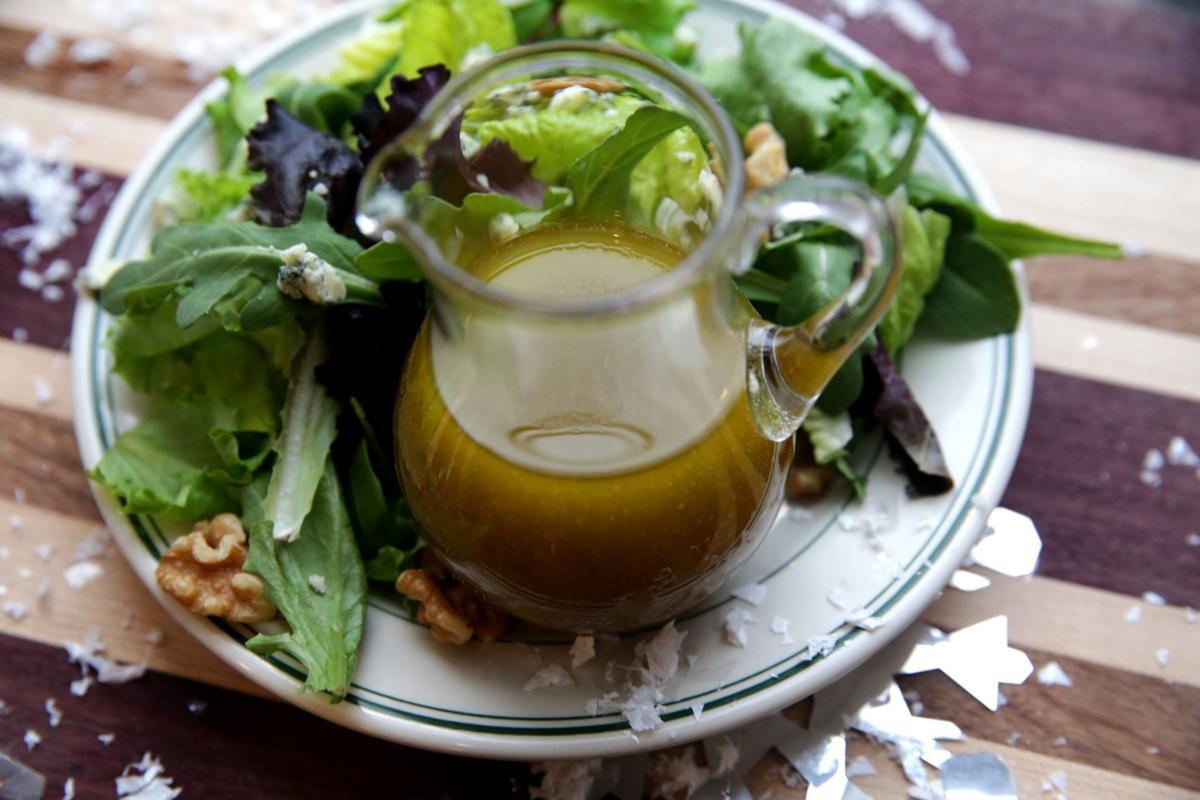 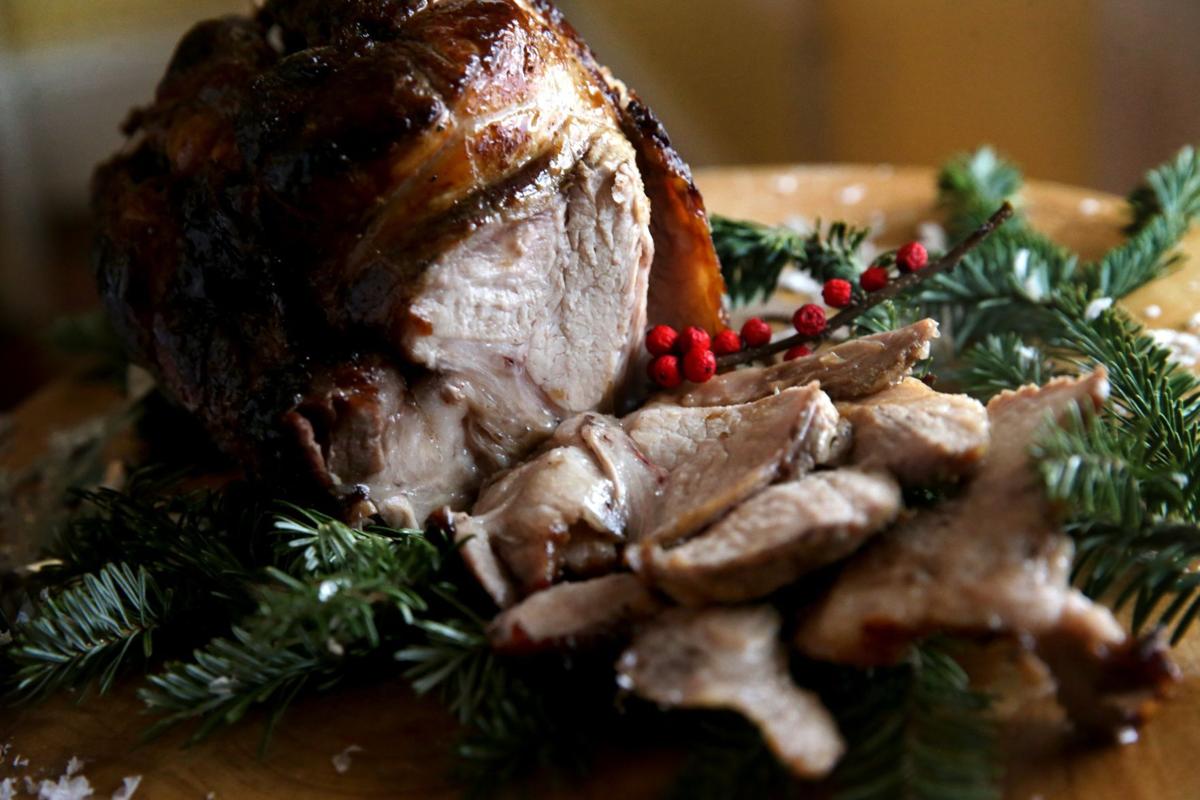 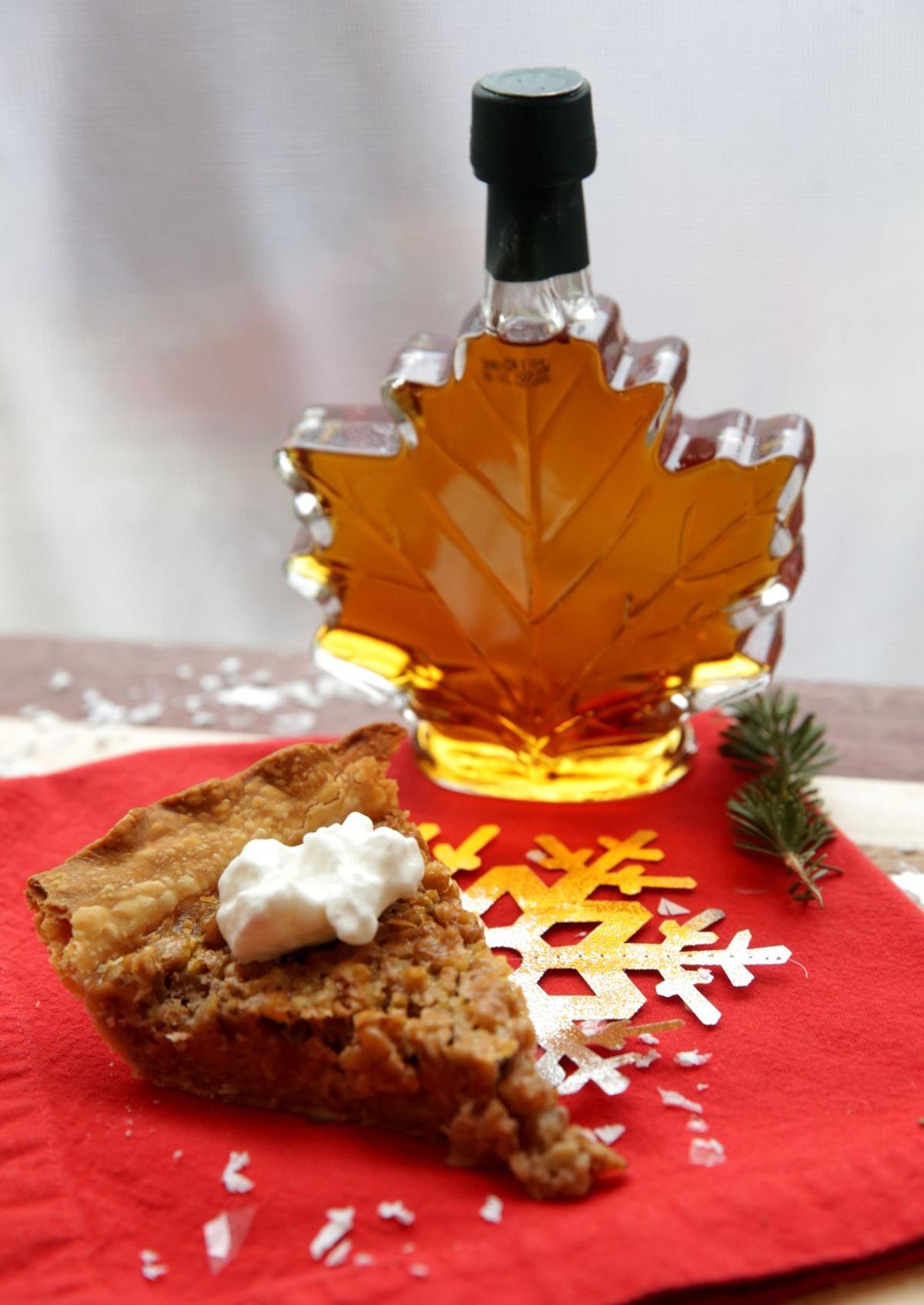 You may as well admit it. It’s nothing to be ashamed of. You do it. We all do it.

When you cook with maple syrup, and some of the syrup clings tenaciously to the measuring spoon or cup, you wipe it out with your finger and then lick the syrup off the finger. Don’t you?

Of course you do. That’s the treat for the cook, a little something extra you deserve for doing the work. A present to yourself. And it is a well-known scientific fact that maple syrup licked off a finger has no calories. It is an inexplicable scientific phenomenon that is equally true of syrup licked off of spatulas.

Whenever winter rolls around, I have maple syrup on my mind and on my finger — wait, never mind, it’s not on my finger anymore. Usually beginning in late January, when the nights are cold but the temperature rises above freezing by day, the sap in sugar maple trees starts to flow.

Many people, if not most, do not think to use maple syrup for cooking savory dishes. That’s a shame. The sweet maple flavor adds a boost to any number of foods. It’s a must-have on roasted butternut squash or Brussels sprouts. It’s great as an ingredient in salty spiced nuts. And it is a delight mixed in with pumpkin soup.

I tested the versatility of maple syrup with four dishes. One, admittedly, is a dessert. Actually, two were, but the less said about Baked Maple Egg Custard, the better. Along with the one dessert, I also used nature’s golden nectar in two meat courses and in a salad.

I should point out that I used real maple syrup. I highly recommend it, though it is not cheap. Imitation maple syrup should also work with these recipes, though the results won't be as satisfying.

Both of the meat dishes are roasts, with the maple flavor forming the main basis of the glaze. The dishes are similar in technique — you coat the meat in the glaze most of the way through the cooking process, to avoid burning the sugars in the glaze — but the flavors are quite different.

Specifically, one has bourbon. The other has the life-affirming mixture of cinnamon and cloves. Both derive considerable benefit from a kick of heat, which amplifies the effect of the maple, but you could leave out the spice if you do not like it.

Maple-Bourbon Glazed Chicken, it should not be a surprise to learn, is the one that had bourbon. Bourbon and chicken is a classic combination; and maple is one of the primary tasting notes of many kinds of good bourbon. Put it all together, and you should have a fine meal.

Which I did. The syrup adds a luscious sweetness to the skin, which brings out the natural gentle taste of the chicken, while the bourbon kicks in an earthy counterpoint that lingers pleasantly on the palate.

It is a great way to take an ordinary roast chicken and turn it into something fine.

Roast Pork Loin with Maple Glaze is even easier to make, but it is absolutely just as satisfying.

The natural sweetness of the pork is intensified by the maple glaze, of course, but not to the point where it becomes cloying. Perhaps it is tempered by the cinnamon and cloves, a combination that to my mind makes nearly everything taste better.

Nearly everything, but especially, as it turns out, pork and maple syrup. Come to think of it, the same glaze would be equally rewarding on chicken, but I wouldn’t bother putting the bourbon glaze on the pork. Why would you want to, when you can just whip one up with maple syrup, cinnamon and cloves?

My salad dressing, Maple-Sherry Vinaigrette, is appealingly nonassertive. I don’t like a dressing with too much of a bite, and it turns out that one way to calm down an aggressive vinegar is to add a little maple syrup.

That’s important, because sherry vinegar, by definition, must have at least 7% acidity. That’s higher than most other vinegars, so it needs a shot of maple syrup to make it more palatable on salads.

On the other hand, sherry vinegar also has perhaps the best flavor: rounded yet dry, often with a hint of nuttiness and a taste of fruit. The restaurant from which I snagged the recipe uses the dressing on a salad with peppery arugula, sharp and creamy blue cheese and toasted walnuts. The dressing makes the perfect accompaniment.

The dessert I made is a staple, Maple-Walnut Pie. It is reminiscent of pecan pie, without the shock of sugar that sends A1C numbers into the stratosphere.

Walnuts and maple syrup — a pairing that should always be encouraged, including on top of waffles or pancakes — are baked together in a pie with more eggs than you might guess (four) and hints and dashes of other goodies such as vanilla, butter, cinnamon and even a squirt of lemon juice.

Of all the dishes I made, the pie features the flavor of maple most of all. With a dessert, that is to be desired. In combination, the tastes of maple syrup and walnuts is simply wonderful.

And the Baked Maple Egg Custard? I thought we agreed not to talk about that.

2. In a small saucepan, mix together maple syrup, bourbon, brown sugar and pepper, if using. Bring to a boil, reduce the heat and simmer until it reaches the thickness of a syrup. You will have about 1 cup of liquid. Allow to cool and thicken. If you try to apply the glaze to the chicken when the glaze is too hot, it will roll off the chicken.

3. Generously season chicken with salt and pepper. Place in an uncovered roasting pan and cook 55 minutes. Brush chicken liberally with glaze, and return to oven. Cook 30 more minutes or so, until glaze is glossy and dark, and chicken’s juices run clear, not pink. If the glaze becomes too dark while cooking, cover bird with foil.

2 teaspoons neutral oil, such as canola

2. Season the pork with salt and pepper. Heat the oil in a 12-inch skillet until just smoking. Brown the roast well on all sides, about 10 minutes. Do not clean skillet. Transfer roast to a 13-by-9-inch baking dish. Cook about 50 to 70 minutes, flipping roast over halfway through cooking. Go on to Steps 3 and 4 while the meat roasts.

3. While the meat cooks in the oven, pour fat out of the skillet. Return to medium-high heat and add syrup, cinnamon, cloves and cayenne pepper, scraping up any browned bits stuck to skillet. Simmer until slightly thickened and fragrant, about 30 seconds.

4. With about 20 to 30 minutes left to cook, brush the glaze over the roast or simply roll the roast over in the glaze. Pour the rest of the glaze over the meat and return to oven. If the glaze in the pan begins to dry out and burn, simply stir in ¼ cup hot water. Meat is done when it reaches an internal temperature of 140 to 145 degrees.

Whisk together vinegar, syrup, shallot, salt and pepper. Gradually whisk in the oil and continue to whisk until fully incorporated. Taste and adjust the seasoning.

2. In a large bowl, beat together eggs, syrup, lemon juice, cinnamon, butter, vanilla and salt until light and smooth.

3. Place pie crust in pie pan, if necessary. Add walnuts, and distribute evenly. Pour in maple mixture and bake 30 minutes, or until solid. Serve warm or cold, with whipped cream or ice cream.

“It’s not just for fried foods. It works as a dipping sauce for raw vegetables, too,” says chef Rick Lewis.

Everyone knows fish is good for you, especially a “fatty” fish like salmon. Full of omega-3 fatty acids, which play an essential role in brain…

4 things to know about the health benefits of mushrooms

Mushrooms are often placed in the vegetable category for dietary recommendations, but they are actually fungi. Here's what else you should know.