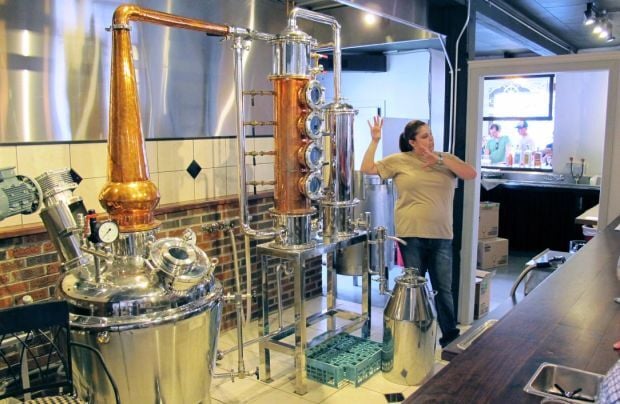 Armies, roads, environmental protection — they’re all fine, for what they are. But every once in a while, Congress can address something that is really important.

I’m talking about the craft distillery industry, those small companies that turn out modest amounts of lovingly made booze.

At stake is the Craft Beverage Modernization and Tax Reform Act.

Legislation was passed at the end of 2017 that lowered the federal excise tax on breweries, wineries and distilleries for two years, until the end of 2019. Last year, the lower tax was extended for one year; it runs out this Dec. 31.

Recently, the Missouri Craft Distilleries Guild sent a letter to Congress — as did similar organizations in other states — asking that the tax break be made permanent. If that does not happen, the federal excise tax paid by craft distillers would jump by 400%, which is to say back where it was before the act was passed in 2017.

“It has insane bipartisan support. Everyone is for it, but they haven’t moved on it yet in terms of enacting it or making it permanent,” said Tara Steffens, chief operating officer of Pinckney Bend Distillery in New Haven.

Steffens said the original act, part of the Tax Cuts and Jobs Act of 2017, was passed because “it was recognized that smaller producers were being disproportionately left out. Even though we were making far, far, far less than Jack Daniels, we were paying the same (rate) in federal excise tax.”

The rate is paid per proof gallon using a formula that Steffens called “insanely complicated.” Feel free to skip the next three paragraphs.

One proof gallon is a gallon of 100 proof liquor (in other words, 50% alcohol) at 60 degrees. Because only the alcohol is taxed, not the water, a gallon of 80 proof bourbon would therefore be considered 0.8 proof gallons.

But if the tax break is not extended or made permanent, the rate will go back to $13.50 across the board.

What that means to consumers is that a bottle of Pinckney Bend’s American Gin, which is 93 proof, could cost anywhere from $1 to $3 more at the store if the tax break is allowed to expire, Steffens said.

Of course, if the tax break is made permanent, that would mean less money in the government’s coffers to pay for armies, roads and environmental protection. But Steffens argues that the trade-off is worth it because the tax break has allowed craft distillers to reinvest in their businesses.

Before COVID hit, the craft distilling industry was doing surprisingly well. A study by the University of Missouri found that the state’s 35 or so small distillers — most of them only a few years old or less — brought in $567 million in gross sales in 2019.

These sales had a ripple effect on everyone from farmers to restaurants and bars to companies that make barrels for aging the alcohol. Truckers and warehouses benefitted, too. The Missouri Meerschaum Co. in nearby Washington struck a deal with Pinckney Bend: The distillery gets the corn and the corn-cob pipe company gets the cobs.

With the coronavirus, Steffens said, “it’s been topsy-turvy.” People have been drinking at home more, but sales to bars stopped completely for several months.

“Sales have shifted: Some have gone down and some have gone up. Things that used to sell in winter have started selling in summer,” she said.

Though it is not yet 10 years old, Pinckney Bend is one of the oldest craft distilleries in the state. Steffens said the company would be able to survive the tax rate going back up, “however we have two or three projects that would not happen. That would be both a building and a product expansion — both of these would be stopped. We’re in a holding pattern right now,” she said.

“We’ve also held off on hiring, for the same reason. No company wants to be on pause.”

Neman: What are the best foods in the world?

At last! A listicle we can all get behind — voters at website TasteAtlas have chosen what they consider the 100 best traditional regional foods in the world.

Thanksgiving for just a few? Cook a turkey breast

You can still have Thanksgiving, even if it has to be by Zoom. We offer four fabulous recipes for cooking a reasonably sized piece of turkey, the breast.

This focaccia recipe comes together quickly, in about an hour and a half, from start to finish.