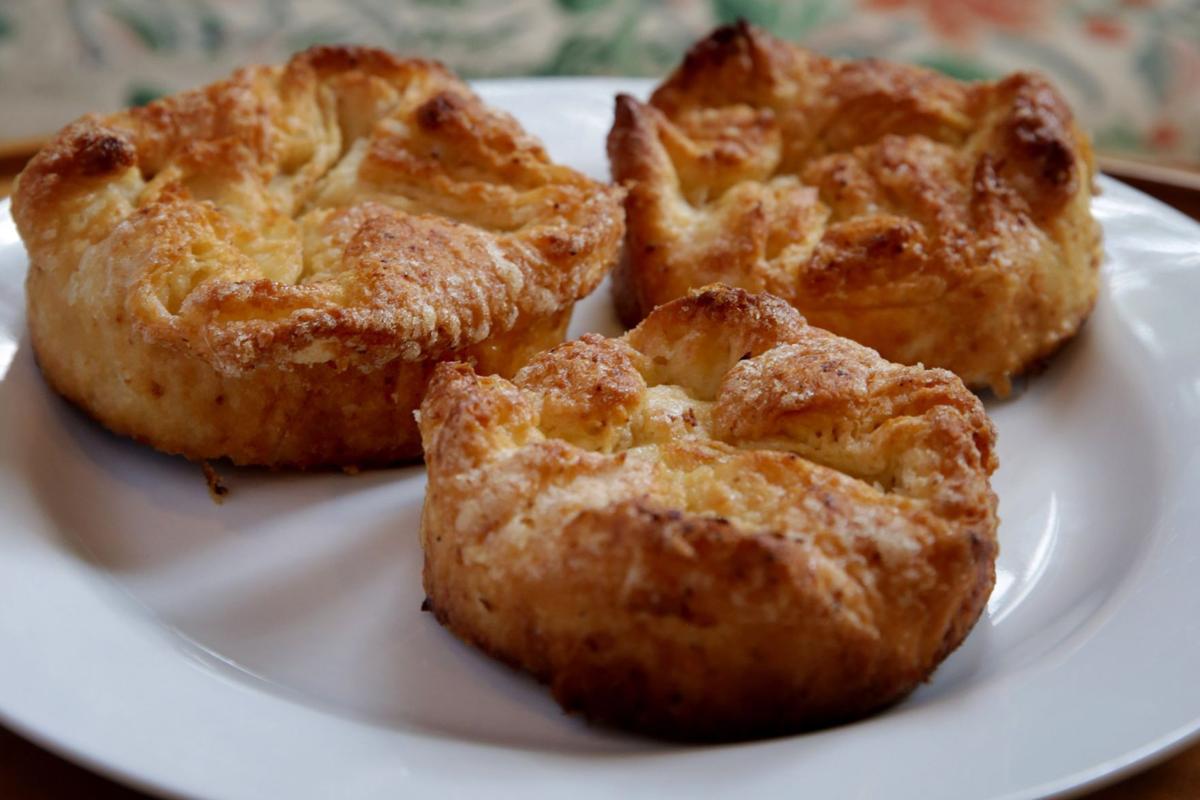 Kouign-amann is a rich, light pastry. 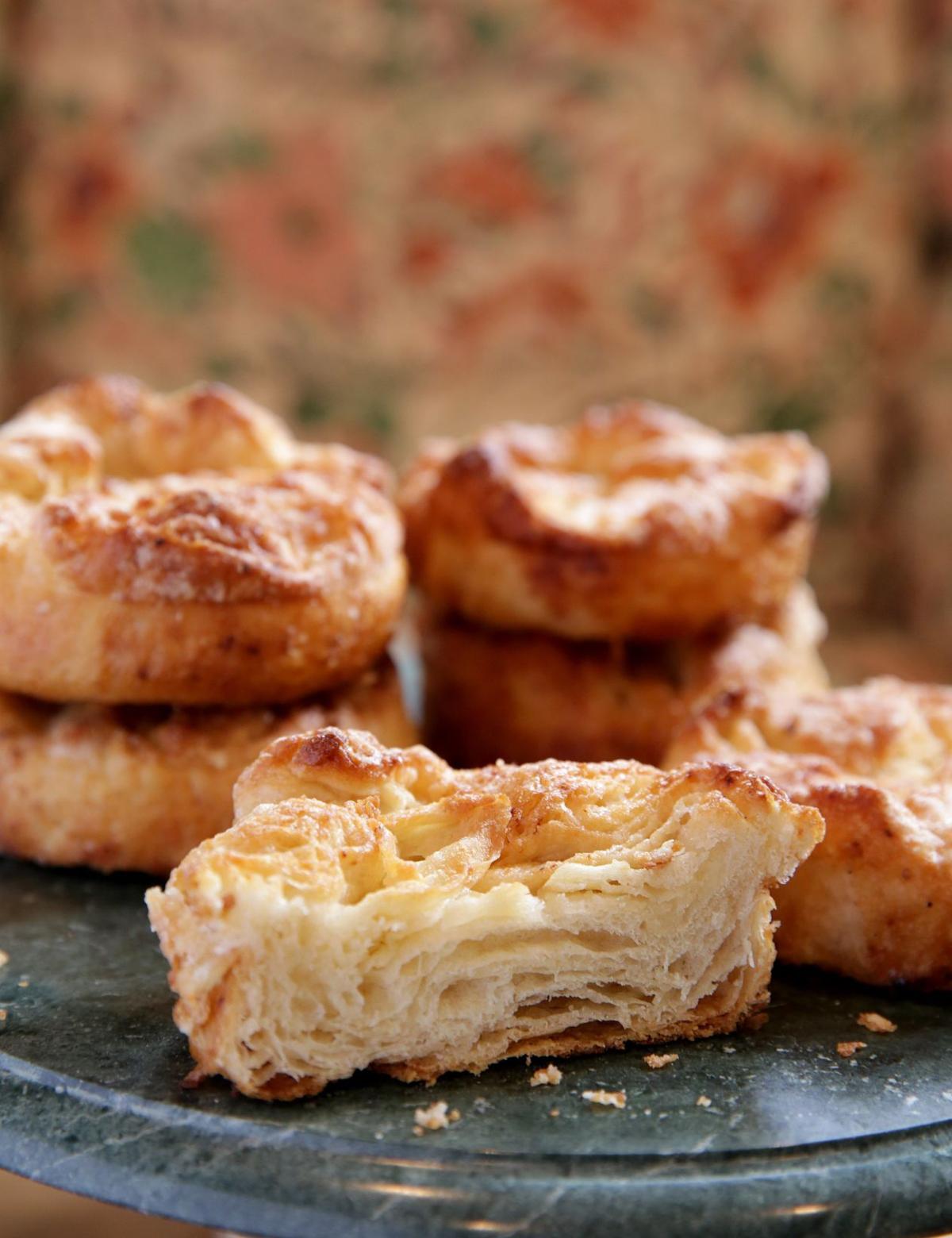 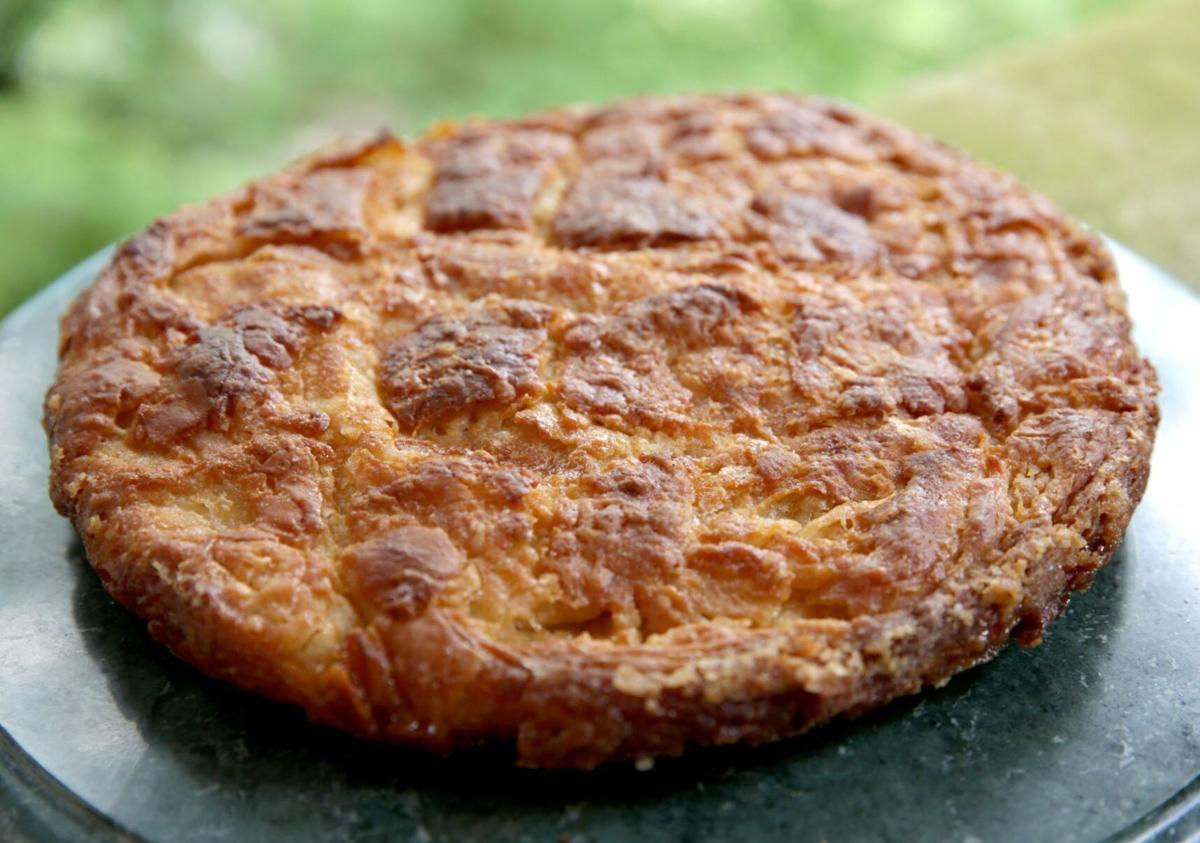 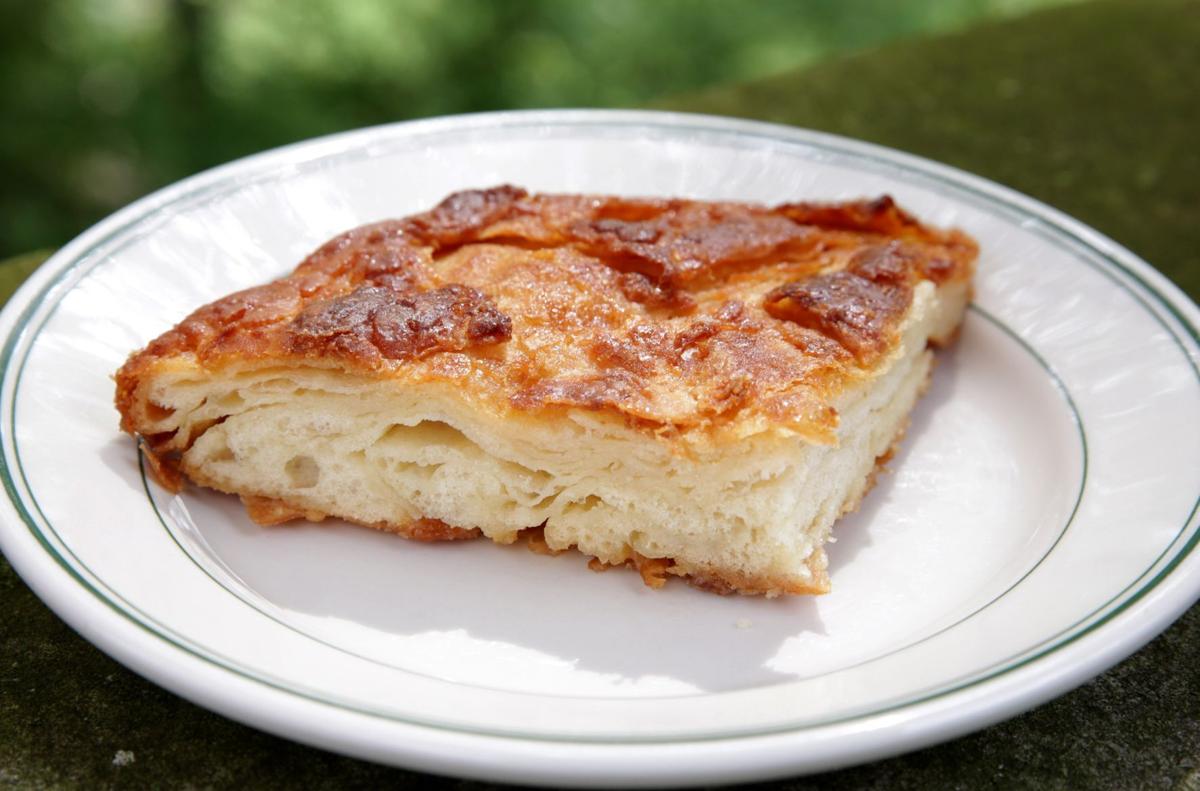 Are kouigns amann the best pastry ever?

Rose Levy Beranbaum thinks so, and she is perhaps the most respected baking expert in America. Nathaniel Reid, who is one of the most celebrated bakers in St. Louis, is fond of them, too.

“It’s one of our most requested items,” said Reid, a James Beard Foundation award semifinalist in 2019 and 2020 and owner of Nathaniel Reid Bakery in Kirkwood. “There’s not anything not to like.”

Indeed. Kouigns amann are flaky, buttery, sugary and a little salty — and when you heat butter and sugar together, you get caramel. In short, they’re the perfect pastry.

Originally from Brittany, in France, kouigns amann are made from a yeasted, laminated dough. That means they have layers and layers of thin, buttery pastry folded on top of one another. Unlike puff pastry, they have yeast; so the layers rise and take on a more complex flavor. In that respect, they are similar to croissants, Reid said, but they are sweeter.

Like croissants, they are also difficult to make at home. Professional bakers have rolling devices called sheeters — they are like a pasta maker for dough — that can churn out thin, even sheets of pastry. Professional bakers also have the time and the manpower to make them; Reid said his take a full 24 hours, which gives the yeasted dough plenty of time to develop a rich flavor.

In her seminal cookbook “The Baking Bible,” Beranbaum writes that her first couple of attempts at creating kouigns amann were disasters. Only when she refined her method on her third try did she reach pastry nirvana.

I decided to try her version which — let the baker beware — takes six hours to make (though much of it is spent allowing the dough to rise). But then I also decided to try an intriguing variation that can be finished in just 2½ hours, also with most of the time spent rising. Instead of individual pastries, this version makes one large laminated, buttery, bread-meets-pie pastry.

It’s called Salted Caramel Flaky Pie. The name says it all. And it’s easier to pronounce than kouign amann, which is variously said to be ka-WEEN-a-mahn and queen-ya-MAHN.

Either way, in the Breton language it means “butter cake.”

If she says to use butter with a high amount of butterfat, then use it (85%, if you can find it — the label will say it has 110 calories per serving). It’s easier to work with when you are laminating dough — folding it with butter so it develops alternating layers of dough and butter.

And if she says to use bread flour because its higher protein level keeps the butter layers from breaking through the dough, then go ahead and use it if you have it. Frankly, I made it twice; once with bread flour and once with all-purpose flour, and the bread flour version was only marginally better.

And that might have been because it was the second time I made it, and I was getting better at the technique.

Both times, the results were simply magnificent. Lightly caramelized on the bottom, flaky on the top and sides, and soft and sweet in the middle, the kouigns amann were as good as a pastry can get.

Except the other kind I made might have been better.

The Salted Caramel Flaky Pie was a little denser than the traditional kouigns amann, but that only meant that the golden caramel goodness was more concentrated, with more rich flavor per bite.

It was also, as I said, faster and easier to make. Novices probably should not attempt it, but mid-level bakers could certainly give it a whirl. It uses a laminated dough, too, but this version is less of a hassle.

Two taste testers said they liked it better because it had a little more of a caramel taste than the traditional shape. On the other hand, a 10-year-old neighbor who has been around the world said the traditional one was one of the best things he has ever eaten in America. So there's that.

My kouigns amann turned out well — sublimely, actually — and I am more of a cook than a baker. But if yours leak butter or the dough becomes sticky and unworkable, do not despair.

The results are well, well worth it.

Note: This article has been changed to correct the location of Nathaniel Reid Bakery.

This restaurant's menu offers bluntly honest descriptions of the dishes

"Since I have so high expectation on this dish, I am not a huge fan for our version, to be honest," the owner states bluntly.

How to Cook Chicken Breast in the Oven

While one of the easiest and tastiest ways to cook chicken breast is in the oven, it's a technique that can often overcook and dry out the meat.

“It’s not just for fried foods. It works as a dipping sauce for raw vegetables, too,” says chef Rick Lewis.

Few things make for a better dinner during the coldest days of winter than a hearty bowl of chili, but it’s nice to have something to break up the monotony. Enter: cornbread, the lowkey star of winter sides.

Kouign-amann is a rich, light pastry. 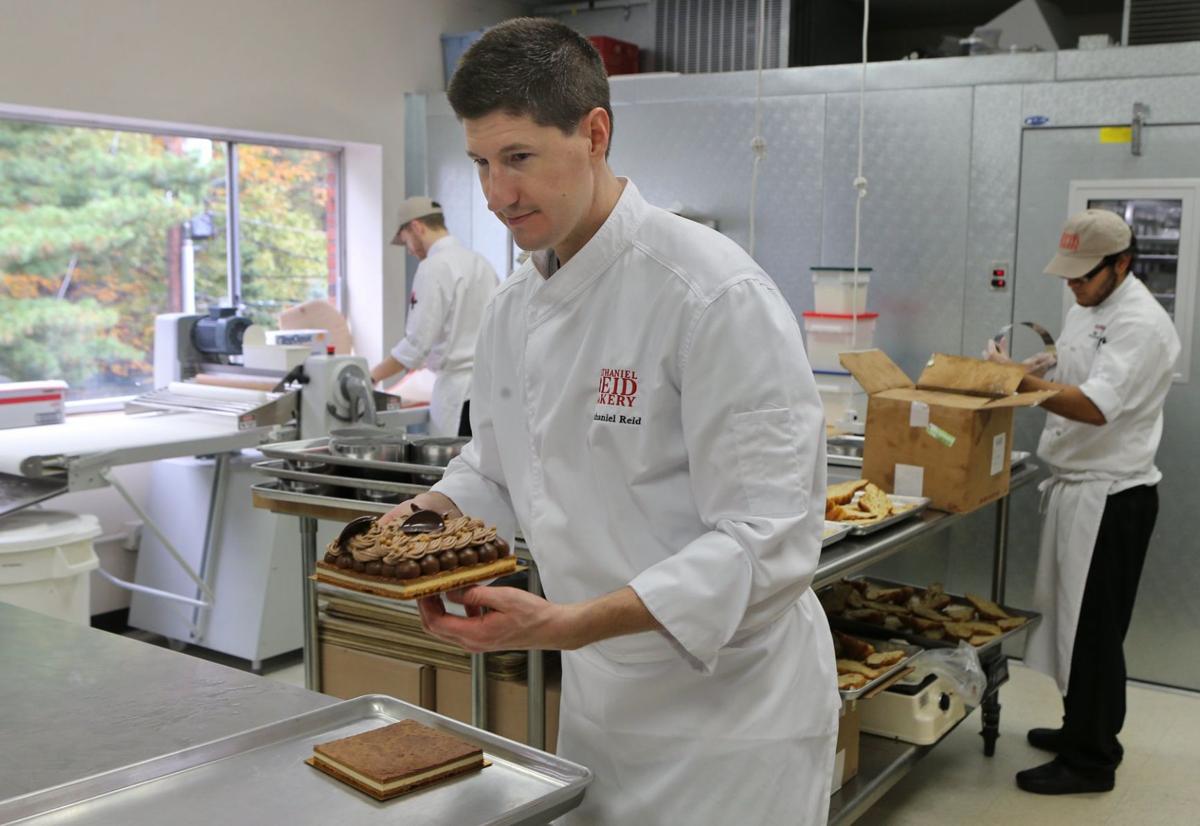