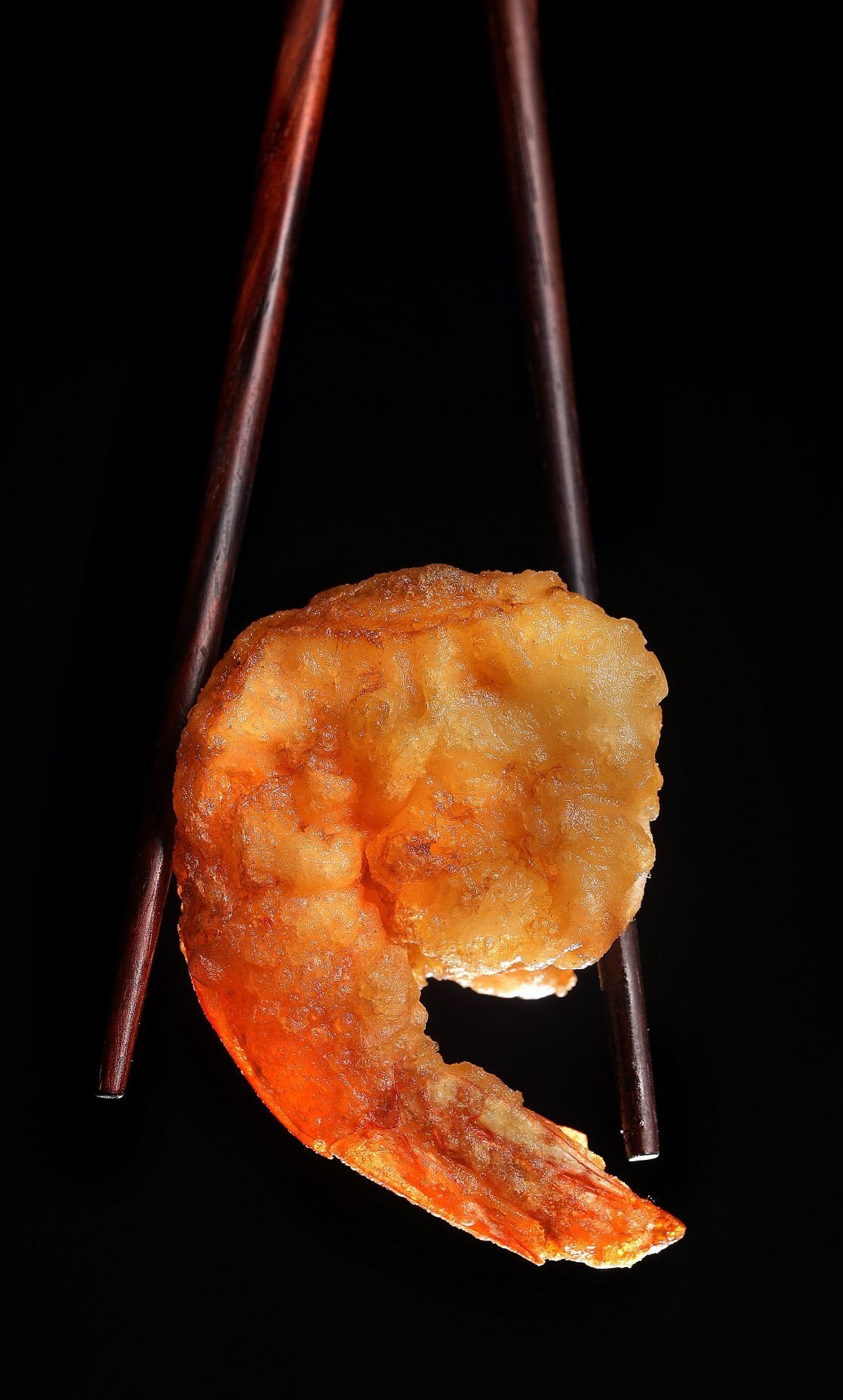 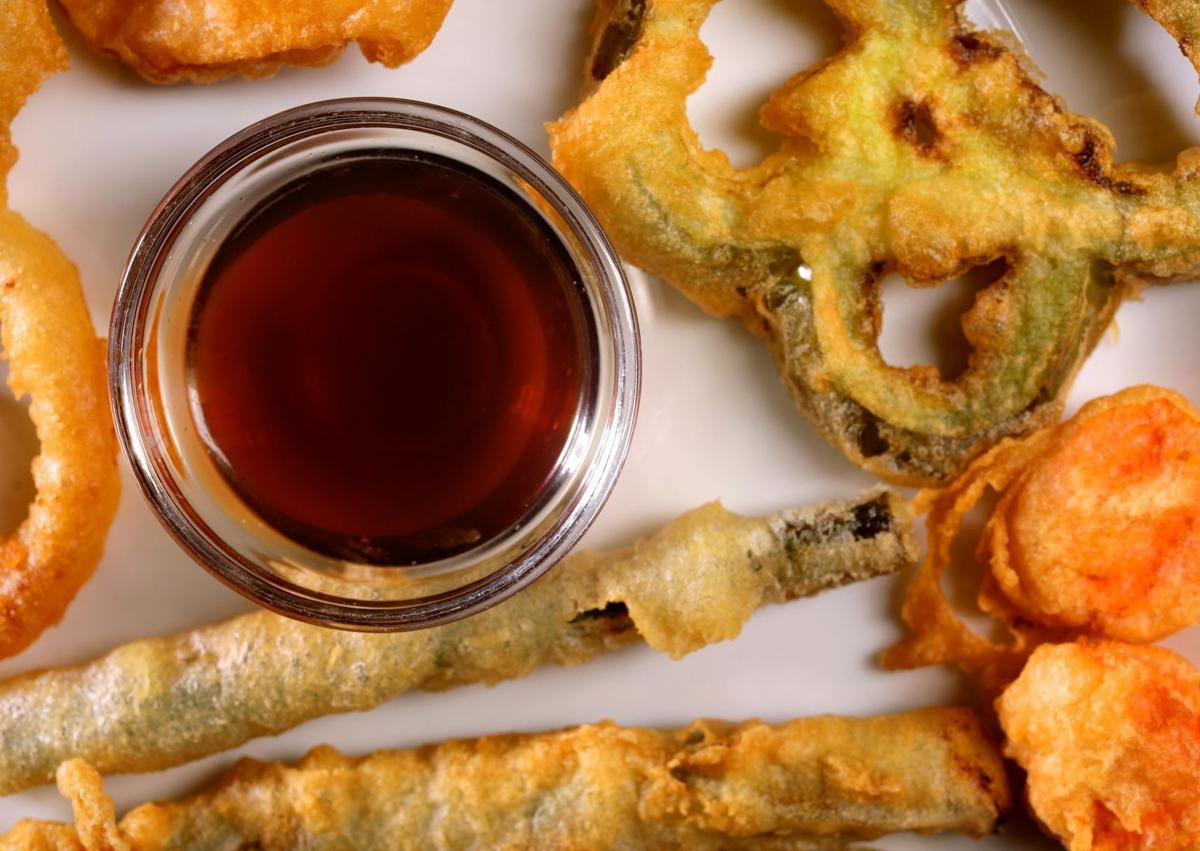 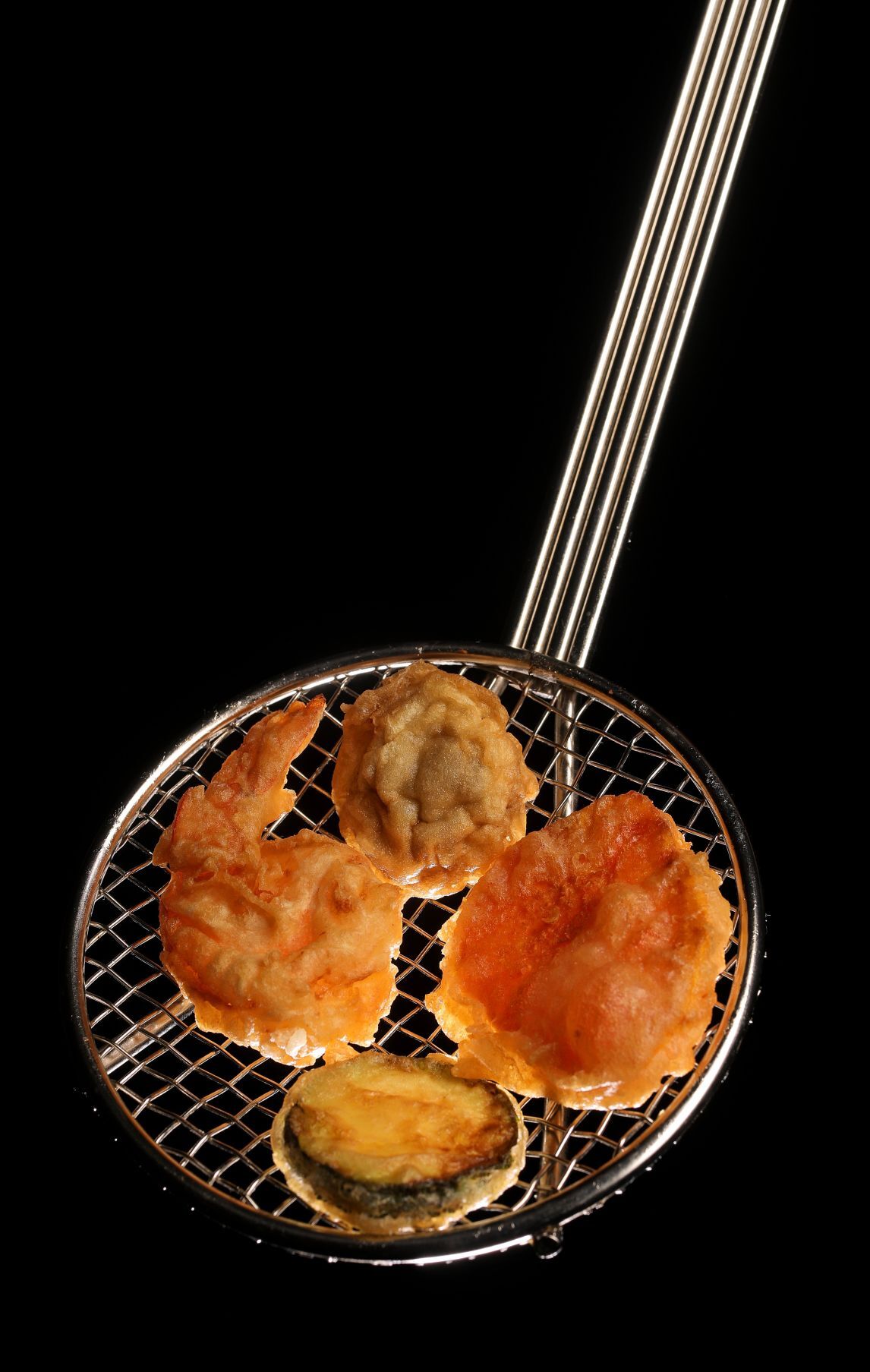 No one knows for sure the origins of the Japanese word “tempura,” but one theory is my favorite.

The word is written with three picture characters: Ten, which is also the first part of the word for heaven; pu indicates a woman; and ra is a type of woven silk gauze.

Put them all together and you end up with something like “woman clad in silk gauze, giving a glimpse of heaven.”

That may be outdated, but it’s not a bad description of tempura — a delicious nibble fried in a light, gauzelike coating.

Tempura is all about the lightness of the coating; the more ethereal the better. It should be delicate and crisp, and should almost melt in your mouth.

What goes inside the coating is equally important, and the possibilities are close to endless. Tempura cooks for only a few short minutes — any longer and that gossamer coating will burn — but just about anything that can cooked in that time can be cooked tempura.

Shrimp is a classic. So are small or thin vegetables. Thin-sliced steak is popular, and also Alaskan king crab legs.

The best tempura I ever had was a soft-shell crab claw. The crab had just molted its shell that afternoon, and the claw was perfection — tender and briny, encased in a shatteringly delicate, light golden brown crust.

I don’t happen to have a crab that has just molted its shell, so I made do with shrimp and an assortment of veggies. The only question was about what kind of batter I would use.

The traditional batter is exquisitely simple: one cup of flour, one cup of water and one egg, though some add baking powder, and a bit of sugar can also be added.

A more modern update uses cornstarch in place of flour for a crispier crust and replaces the water with club soda, on the theory that the bubbles make the batter lighter.

I also checked out J. Kenji Lopez-Alt, who uses science to make cooking better. He agrees that the best tempura uses club soda and as much cornstarch as flour. But he also suggests an ingredient I never would have considered: vodka. It limits the development of gluten in the batter, he writes, which keeps the batter lighter for longer.

Which one to use? In the interest of science, I tried all three.

The biggest distinction in the traditional batter appears to come from its small amount of sugar. The difference in taste is extremely subtle, if not nonexistent, but the sugar clearly makes the crust a bit browner. This slightly darker tempura is more visually appealing than its pale and wan rivals.

The modern update on the traditional method, the one that substituted cornstarch for flour, was particularly pale and wan, and also thin. It barely clung to the vegetables and shrimp it was attempting to coat.

It actually didn’t taste bad. But neither was there anything notable or memorable about it. If you think of batter-fried onion rings as a kind of tempura, and they are, then this version resulted in the limp and stringy onion rings found at the type of sports bars that are especially unremarked for their food.

It wasn't as good as the other two. Frankly, I don't recommend trying it (in fact, I'm not going to include the recipe, so there is no mistake).

The Lopez-Alt science-based version of tempura was lighter (in texture as well as color) than the traditional method, and more shatteringly crisp. It probably came closer to the ultimate tempura ideal.

However, it is also fussier to make. You have to have ice-cold soda water (I put a chilled can in a big bowl of ice water an hour before cooking), and you also have to have vodka. It would be best if the vodka were also ice cold, but the vodka I thought was in my freezer turned out not to be there. So I used regular room-temperature vodka, though a particularly nice brand.

Is this version a waste of good vodka? The recipe calls for two ounces, which is what would be poured as a shot at a good Russian restaurant. The question comes down to one of personal taste.

Which do you value more, a shot of vodka or the best tempura you could make?

We challenged our readers to submit their favorite holiday cookies for our annual contest. The results were amazing.

Studies show that people like good, homemade Christmas cookies more than store-bought ones (or at least they should). We offer five recipes that are spectacular.

Neman: Voicemails that I've missed during the pandemic

One of the disadvantages of working at home during the pandemic — or advantages, if you think about it — is that I miss all of the phone calls…