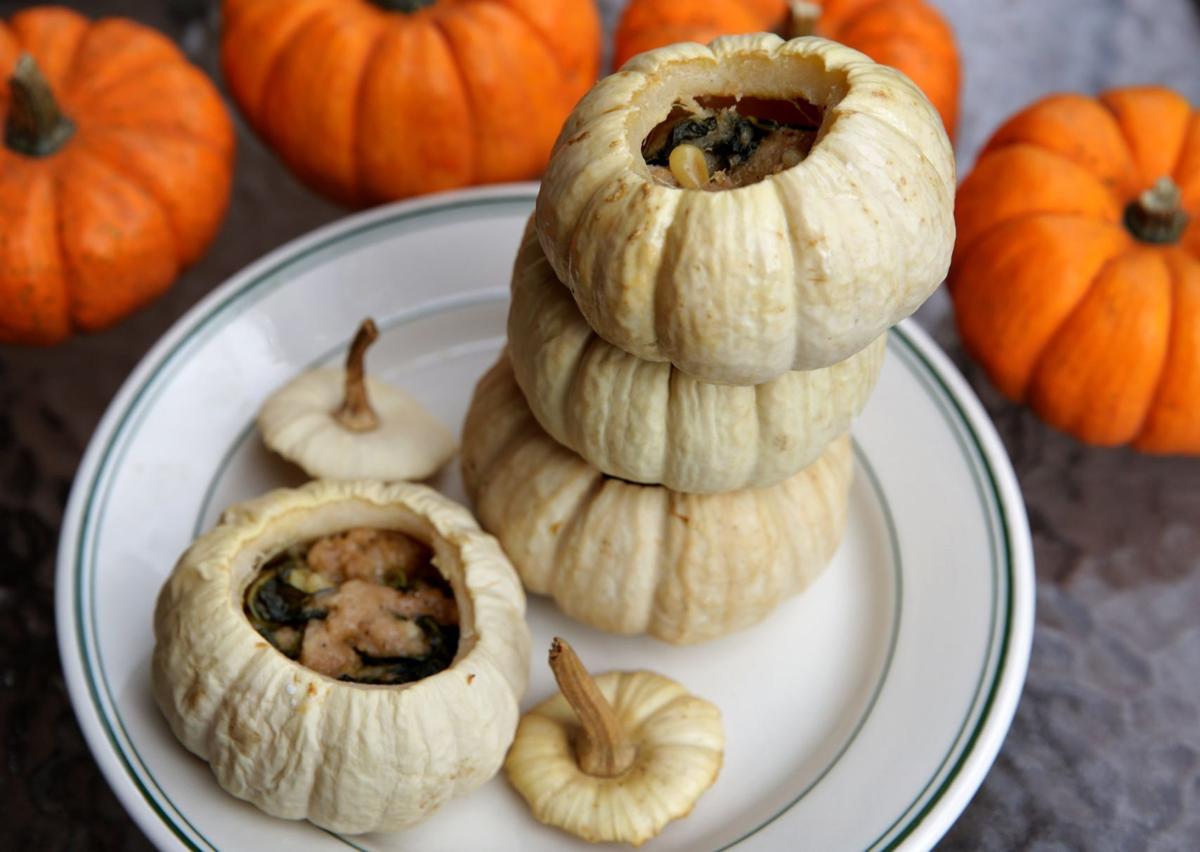 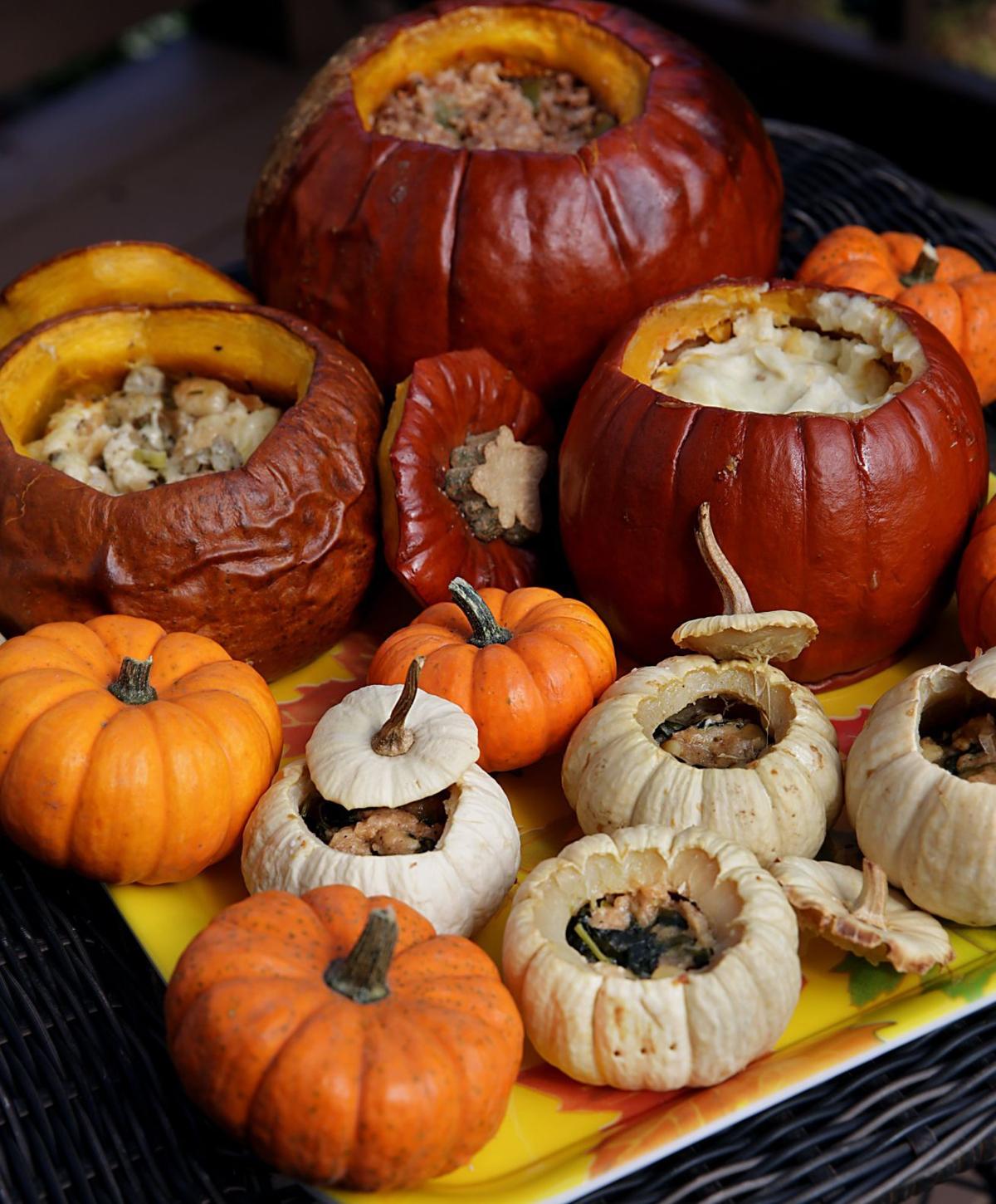 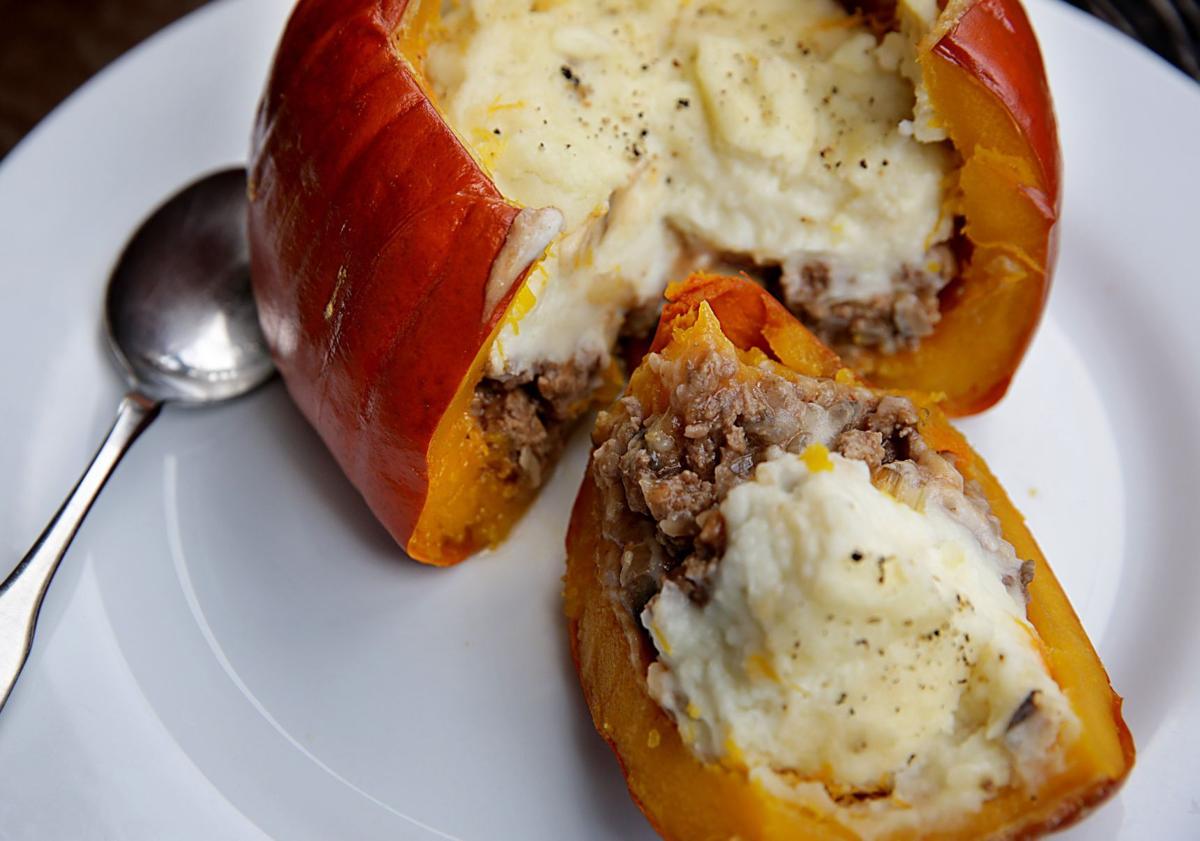 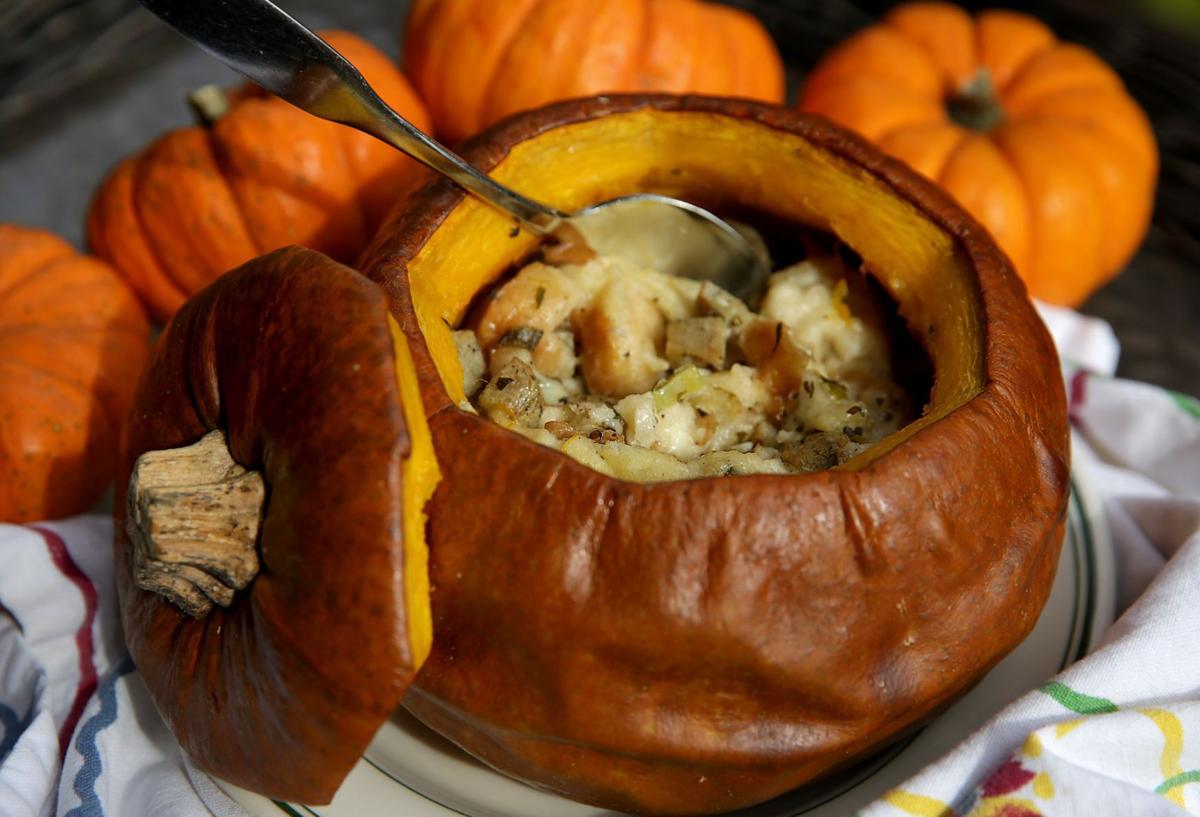 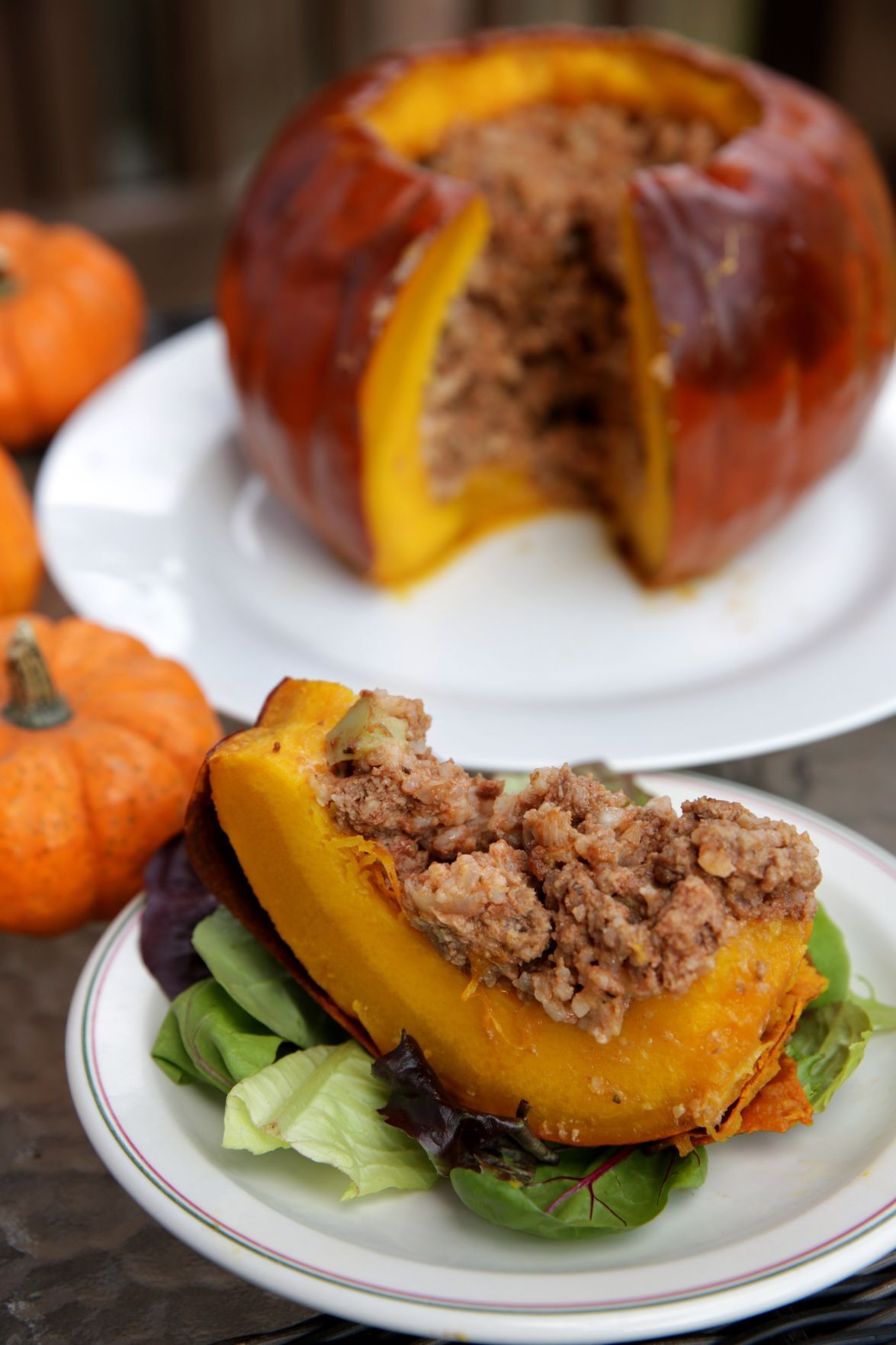 Pumpkins aren't just meant for pie or playful evisceration. They are also a vegetable, a squash, and can therefore be eaten.

The question is: How? How to best eat a pumpkin?

The other questions is: Why? Pumpkins don't taste particularly good. Why would you want to eat them?

The answer is: Not all pumpkins are created equal. Smaller pumpkins are often delicious and are reminiscent of other winter squash. It's the larger jack-o’-lantern type of pumpkins that give all the other pumpkins a bad reputation, at least in terms of texture and flavor.

So I decided to do something about it. I decided to take some pumpkins, stuff them full of other things, and then roast them.

It's not an idea I had by myself. In 2010, the highly regarded food writer Dorie Greenspan included a recipe for stuffed pumpkin in her cookbook "Around My French Table," and they have been a popular dish since then.

So I started with Greenspan's groundbreaking recipe — though the idea was not original with her, either; people have been stuffing pumpkins for decades.

As with three of the recipes I made, I used pie pumpkins for this dish. Pie or sugar pumpkins, which are always labeled such, have the best flavor of all pumpkins. They are sweet, but only a little, and the mild sweetness merely adds a hint of intrigue to a savory dish.

Each of the recipes uses a starch to help fill out the pumpkin. In Greenspan’s inelegantly named Pumpkin Stuffed With Everything Good, the starch is stale bread. It is used as the foundation for layers of other flavors: cheese, garlic, bacon or sausage — optional, if you want to keep it vegetarian — scallions, thyme, cream and a touch of nutmeg.

Pumpkin Stuffed With Everything Good

Those ingredients are satisfying enough as they are, but don’t forget the additional taste of pumpkin. A chunk of pumpkin in every bite makes a good meal better.

Next, I roasted a pumpkin stuffed with shepherd’s pie. That’s really all you need to know: It’s shepherd’s pie inside a roasted pumpkin. If you kind of squint your taste buds, it is somewhat like eating moussaka, with pumpkin replacing the eggplant. And while pumpkin tastes nothing at all like eggplant, it also kind of does.

I used ground beef for my shepherd’s pie, but ground lamb, I imagine, would be just as good.

The next dish I made uses a large pumpkin — or at least large for a pie pumpkin — five or six pounds. It’s good for a substantial meal, which is why it’s called Stuffed Pumpkin Dinner. People who are tired of turkey have been known to make it for Thanksgiving.

The starch this time is rice (in the shepherd’s pie recipe, it is mashed potatoes). The rice is mixed with ground beef, onions, green pepper and tomato sauce, so basically it is a chopped-up stuffed pepper stuffed into a pumpkin, with a few twists.

My favorite of the four stuffed-pumpkin dishes did not use pie pumpkins; it used mini pumpkins, which are just a couple of inches tall.

These are stuffed with baby kale, breadcrumbs (that’s the starch), cheese, scallions, garlic, pine nuts and more, all moistened (or more) with heavy cream. The small pumpkins are wonderfully tender when cooked, and a little sweet. Or at least they aren’t bitter.

Whatever. They taste wonderful, a little bit nutty, with the unbeatable combination of kale (or spinach, if you prefer), cheese and cream. The pine nuts add a toasty crunch.

Most people use mini pumpkins for decoration. But if you stuff a few and roast them, you’ll have a side dish worth celebrating at the most celebratory time of the year.

Hanukkah trivia you can share with friends and family

Hanukkah trivia you can share with friends and family

This week our Special Request column shares recipes from local chefs that are perfect for a holiday meal.

Here's why Ocean Spray cranberry sauce labels are upside down

Perhaps one of the great Thanksgiving mysteries is the cranberry sauce, and not why people eat it: Why are the labels on Ocean Spray cans upside down?

Charcuterie is the word this season

Recall announced for onions due to salmonella outbreak

The CDC is advising consumers to avoid purchasing certain onions due to a salmonella outbreak reported in 38 states and Puerto Rico.

Churrasco is a Portuguese name that’s now used for any type of grilled meat. It’s usually topped with chimichurri sauce and is popular throughout South America. Parsley, garlic, red pepper flakes oil and vinegar are the basic ingredients for the sauce. I use bought chimichurri sauce that can be found in most supermarkets, making this a quick dinner. I also have given a recipe for making the ...

Plan to have both white and red wines, but try to avoid those that are too tannic, too oaky and too high in alcohol. Here are two suggestions from Oregon and California.

The kitchen can be chaotic place during the holidays, and knife mishaps can occur. Here's advice on how to avoid a kitchen knife injury.

If you love the flavor of Gardetto’s classic snack mix but are looking for something a little lighter, these Gardetto’s Crisps are the answer.…