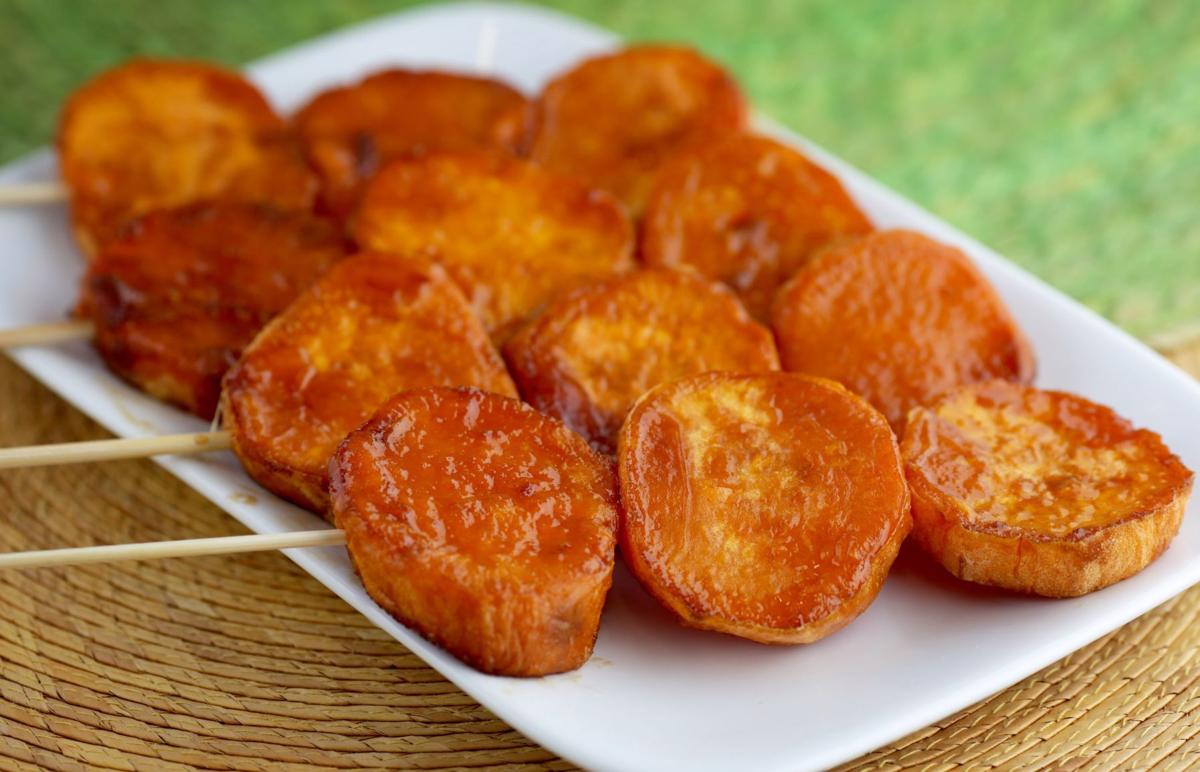 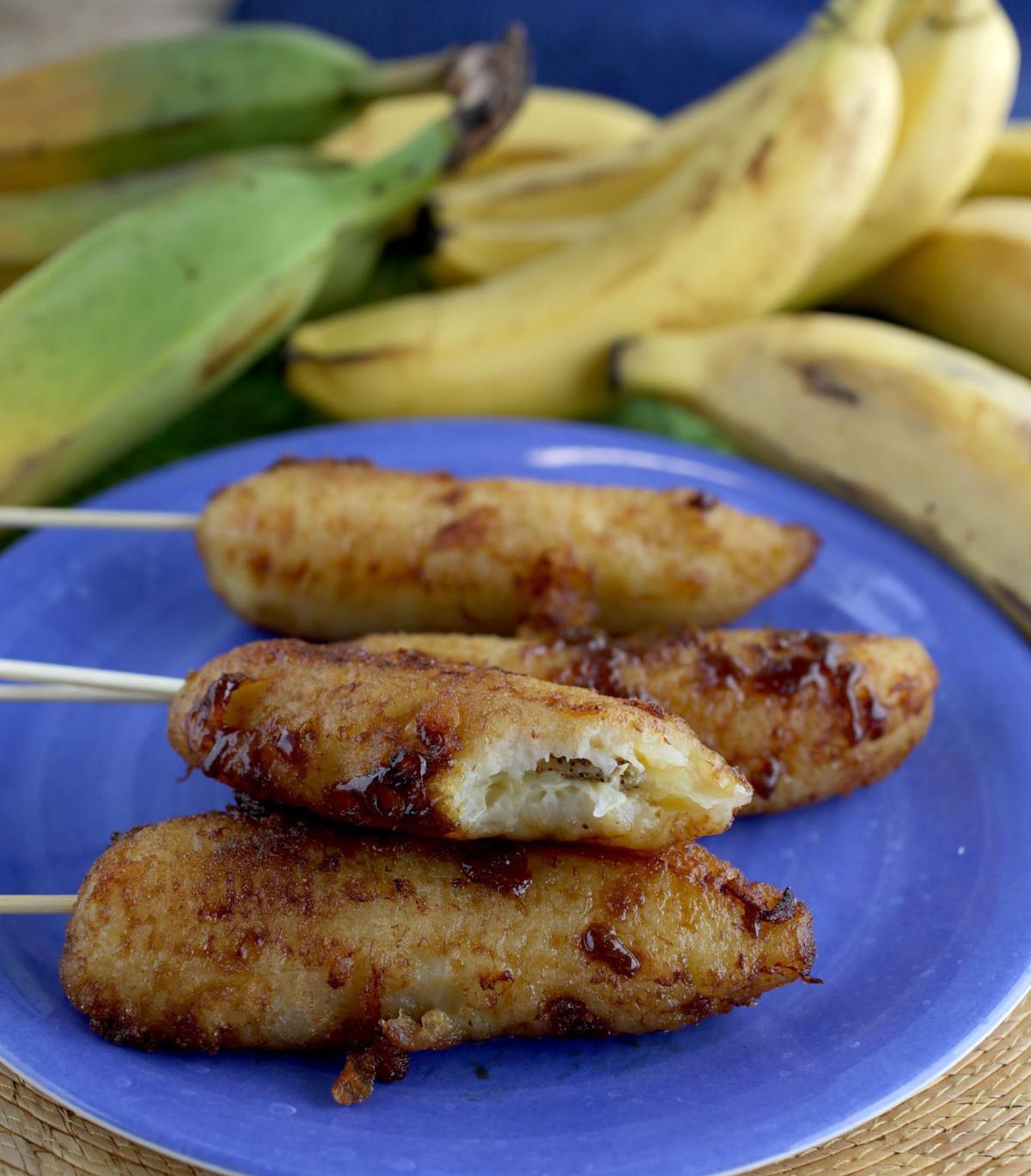 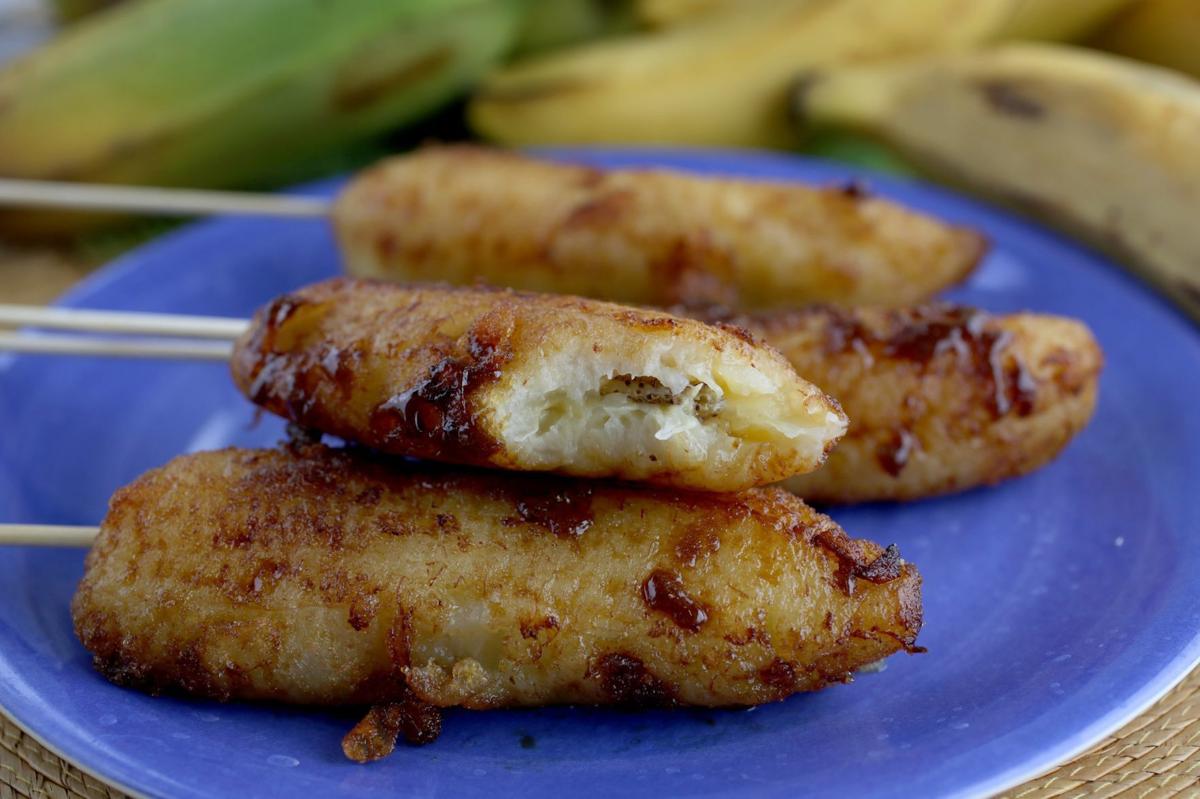 All you need to know about banana cue is that it is caramelized, fried banana, served on a stick.

I know a guy who doesn't like sweet potatoes. "There is nothing you could do to a sweet potato that would make me like it," he has said.

Even deep fry it and caramelize it?

So he has no interest in camote cue, although I still think he would enjoy it if he tried it. And that's fine. It just means more camote cue and banana cue for the rest of us.

Both of the cues, banana and camote, are popular street foods in the Philippines. You are especially likely to find them as a mid-afternoon snack, or meryenda. I imagine they are particularly popular among children coming home from school, but adults adore them, too.

Best of all, for our purposes, they are incredibly easy to make. They may be a little bit messy, especially if you tend to be a messy cook anyway, like me. But clean-up is a pleasure when you have a belly full of banana cue or camote cue.

One simple cooking technique is used for both dishes. You heat oil until it is hot enough to deep-fry, from about 350 to 375 degrees. Then you drop in the (peeled) banana or the (sliced) sweet potatoes.

These will start to turn golden brown after a few minutes. That is when you add a handful or two of brown sugar. Spoon the brown sugar-oil over the bananas or sweet potato slices, occasionally turning the pieces, until they are golden brown all over.

Remove them from the pot, shake off as much oil as you can, and allow them to cool for a couple of minutes. Place one or two on a skewer, just because everything tastes better on a skewer or at least is more fun, and serve.

Before you rush off and try the banana cue, though, you should know that it doesn't work on what we Americans think of as ordinary bananas. Believe me, I tried. And as I had feared, the most common bananas in the United States are too soft and narrow to stand up to the rigors of deep-fat frying.

In the Philippines they use a squatter, thicker, starchier variety of banana called saba bananas, also known as cardaba bananas. That's a perfect ingredient, but they can be hard to find in this country, so I used burro bananas.

Burro bananas are usually grown in Mexico, and are also shorter and thicker than the bananas we are accustomed to. They can be deep-fried with impunity, and also happen to be delicious. I bought mine at Global Foods Market.

I also decided to try to make banana cue with plantains, and they worked fine. They are certainly hearty enough to be fried with ease, and they happen to taste great when fried and caramelized. But they aren't as sweet as the burro bananas, and I missed that extra dimension to the snack.

And finally, a word about clean-up. You may find that, after you are done, you have clumps of cooked brown sugar stuck to the bottom of your pot. It may seem difficult to get it off, but actually it is quite easy: Just put a couple of inches of water in the pot and bring it to a boil. The sugar will dissolve, and any part of it that doesn't dissolve will be easy to remove.

Your pot will be so clean you'll want to use it again to make more banana or camote cue.

Let's Eat celebrates street food from around the world