As the region’s vaccination effort goes small, residents in some St. Louis neighborhoods still left behind
0 comments
Share this
{{featured_button_text}}

ST. LOUIS — Health agencies across the region, now with ample COVID-19 vaccine in hand, are finding some corners of the region difficult to reach.

In several neighborhoods, including in Wellston, Pagedale and north St. Louis, less than one-quarter of the residents have been vaccinated — half that of wealthier west St. Louis County suburbs.

Health officials said the disparity can be traced, in part, to long-standing gaps in access to medical care, the lack of transportation, and less convenient vaccination sites.

“There are certainly people who do automatically reject the idea of this particular vaccine,” said Spring Schmidt, deputy director of the St. Louis County Department of Public Health. “But most people are just hesitant, and questioning … or they want it to be easier, and more available.”

Tiffany Jones, 31, from St. Louis, is worried about the flu-like side effects, and hasn’t yet sat for the jab.

Pagedale resident Annie Benjamin, 55, said it took her a while, but she ultimately decided to because she has to go into people’s homes as part of her job as a home health aide.

Karan Riley wants to get the vaccine. Her sister got COVID-19, and Riley knows she needs to get vaccinated. But she doesn’t know where to go.

When health organizations here began vaccinating area residents last winter, supply could not keep up with demand. As more vaccine became available, the state opened mass vaccination sites, run with the help of the Missouri National Guard, to answer the overwhelming call. Residents drove hours to find doses, and waited in milelong lines.

The effort seems to be helping: As high-risk groups, like seniors, got vaccinated, COVID-19 case numbers started to fall in those same cohorts. And statewide cases have plateaued in recent weeks.

But the effort to vaccinate St. Louis-area residents is now shifting. The most eager and most able — those with the ability to sign up online, take time off of work and drive to regional clinics — have largely been vaccinated. The pace of vaccinations has since dropped by half: On Friday the state health department reported a seven-day average of about 25,000 doses administered, down from a peak of 50,000 on April 14. The national seven-day average declined to 2.1 million doses on May 1, from a height of almost 3.27 million on April 11.

For weeks, health departments have been reevaluating their strategies, moving toward more small events within communities and a redoubling of efforts to make doses as easy to find as possible.

On Wednesday, the Jefferson County Health Department, after struggling to fill appointments at its larger vaccination site in Festus, announced that it would close that location on June 15. The department will offer vaccinations at its office in High Ridge, and shift its efforts toward more pop-up clinics at businesses and other community locations.

On Thursday, Missouri Gov. Mike Parson’s office announced that the Missouri National Guard would, over the course of May, scale back its involvement with mass vaccination sites. But targeted vaccination teams — who bring vaccine directly to neighborhoods — would continue in the St. Louis and Kansas City regions.

Dr. Alex Garza, who leads the St. Louis Metropolitan Pandemic Task Force, said the large-scale sites were more appropriate when there was overwhelming demand for the vaccines.

“But now it’s, I think, more of getting out into the community,” Garza said at a Wednesday briefing. “So rather than people coming to the vaccine, vaccine goes to the people.”

Rates through the region’s south and central corridor — from Richmond Heights to Chesterfield to Augusta — largely exceed 50%.

The data isn’t perfect. ZIP codes with lower populations have higher margins of error. And DHSS said that records were not included in cases where the ZIP code a patient provided did not match the county where that ZIP code is located.

Pastor Rodrick Burton, of New Northside Missionary Baptist Church in Jennings, said he thinks it would help to have mobile vaccinations at places like bus and train stations. And he thinks there should be more public health messaging from voices that young people would listen to, like people of their own age, on social media.

“The health departments had to react so quickly, and they were already hollowed out,” Burton said. “But if there’s any additional resources, they would do well to do a larger campaign of messaging, information, awareness, through voices that are contextual and age-appropriate.”

Burton said he has given presentations during Bible study about the vaccines, and the church has been giving congregants information about vaccine events in the area.

At the Gemini Barbershop in Pagedale, owner Howard Fields said he regularly asks his customers whether they have been vaccinated.

“There’s a lot of people who don’t have it yet,” said Fields. “They’re just afraid of it.”

Fields and one of his customers, Edward Jones, 55, both said they were encouraged when they saw that the president had gotten vaccinated.

As he sat and waited for a haircut, Jones, of St. Louis, described how he was vaccinated at a local dialysis center. Now, he said, he encourages others to seek the vaccines.

Some vaccine sites have experimented with early hours, or late hours. And mass vaccination sites have been intentionally placed along public transportation routes.

At a laundromat in Wellston, as she folded laundry with her mother, Audra Summlin, 48, of St. Louis, said she received her second shot in February, after she was encouraged to get vaccinated at work.

Summlin said she believes she had COVID-19 in the winter, when she experienced a cough, chills, shortness of breath and a sore throat. She said she is regaining her sense of smell, but lost her sense of taste.

“Many people don’t believe the depths of the dangers,” Summlin said, of contracting COVID-19. “They do not believe it will happen to them.”

If it hadn’t been encouraged at work, she said she might have waited longer because the vaccines were still so new. She said she worried that she would be “injecting something into my body that wasn’t good, that really wasn’t meant for me.”

Now, she thinks, there is “no excuse” to skip the vaccine.

Hospital leaders in southwestern Missouri are exasperated with coronavirus patient loads increasing at an exponential pace.

Health department warns of prevalence of Delta variant across the state.

The department said the state is seeing a rising number of individuals contracting the Delta variant of COVID-19.

The firefighter's death was announced Wednesday in a social media post from the department.

Two counties in northern Missouri have most new COVID-19 cases per capita in the U.S.

In a small group of individuals who had mild cases of COVID-19, most had antibody-producing cells in their bone marrow that target the virus.

Hospital officials in Springfield and Joplin are seeing more cases, which they attribute, in part, to low vaccination rates, fast-spreading variants and more people gathering without masks. 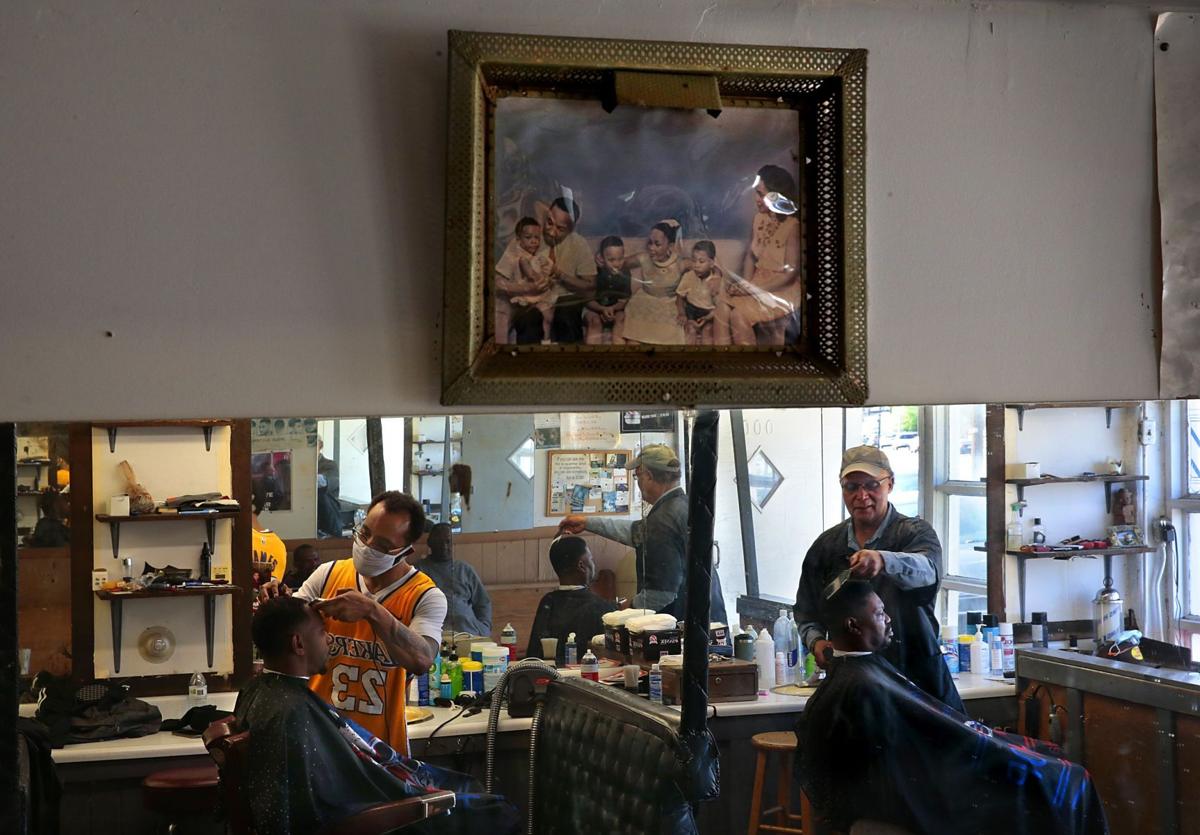 "You got your shot?," asks Howard Fields (far right) of all of his customers including Tyrone Hunter, in his chair at the Gemini Barbershop in Pagedale, where Fields' son Chad trims the hair of Juan Caruthers on Thursday, April 29, 2021. Fields said that while his older customers like Hunter have received their vaccine, younger ones generally have not. "I haven't seen many people in my age range have gotten it," said Caruthers, 37. "I'm not against it but I'm waiting on my turn." Fields' shop, in operation for 47 years, lies in the 63133 ZIP code, which has one of the lowest vaccination rates in St. Louis region. Photo by Robert Cohen, rcohen@post-dispatch.com

Malinda Brown, 65, gives her great-granddaughters Joy Carter, 5, right, and Jersey, 2, snacks while washing clothes at the Wellston Laundromat on Dr. Martin Luther King Drive on Thursday, April 29, 2021. Wellston lies within the 63133 ZIP code, which has one of the lowest vaccination rates in St. Louis region. Brown, of nearby Hamilton Heights, said she received the first vaccine dose but does not remember which she got. "I don't want to catch it," she said. Photo by Robert Cohen, rcohen@post-dispatch.com 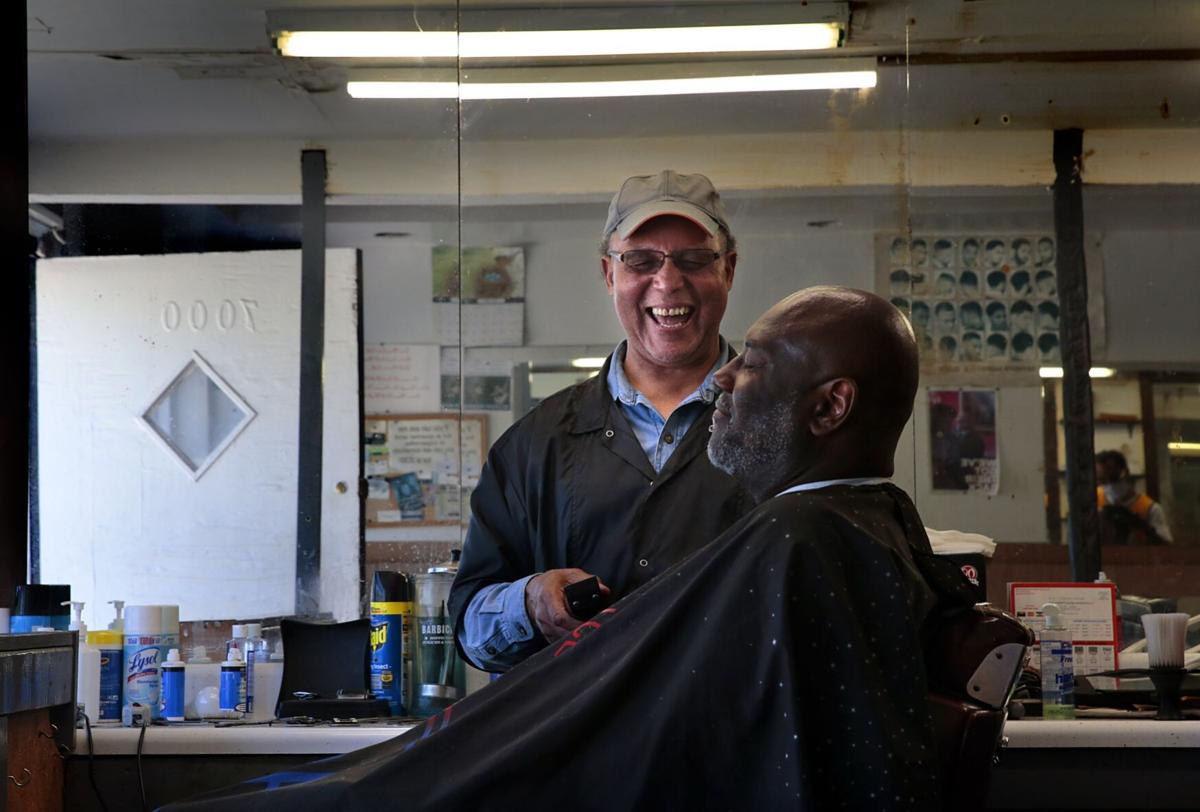 Howard Fields, left, laughs with William Crawford at Gemini Barbershop on April 29 in Pagedale. Fields, who has been vaccinated, said he asks each of his customers if they’ve received their shots. While many of his older customers have gotten it, younger ones have not. 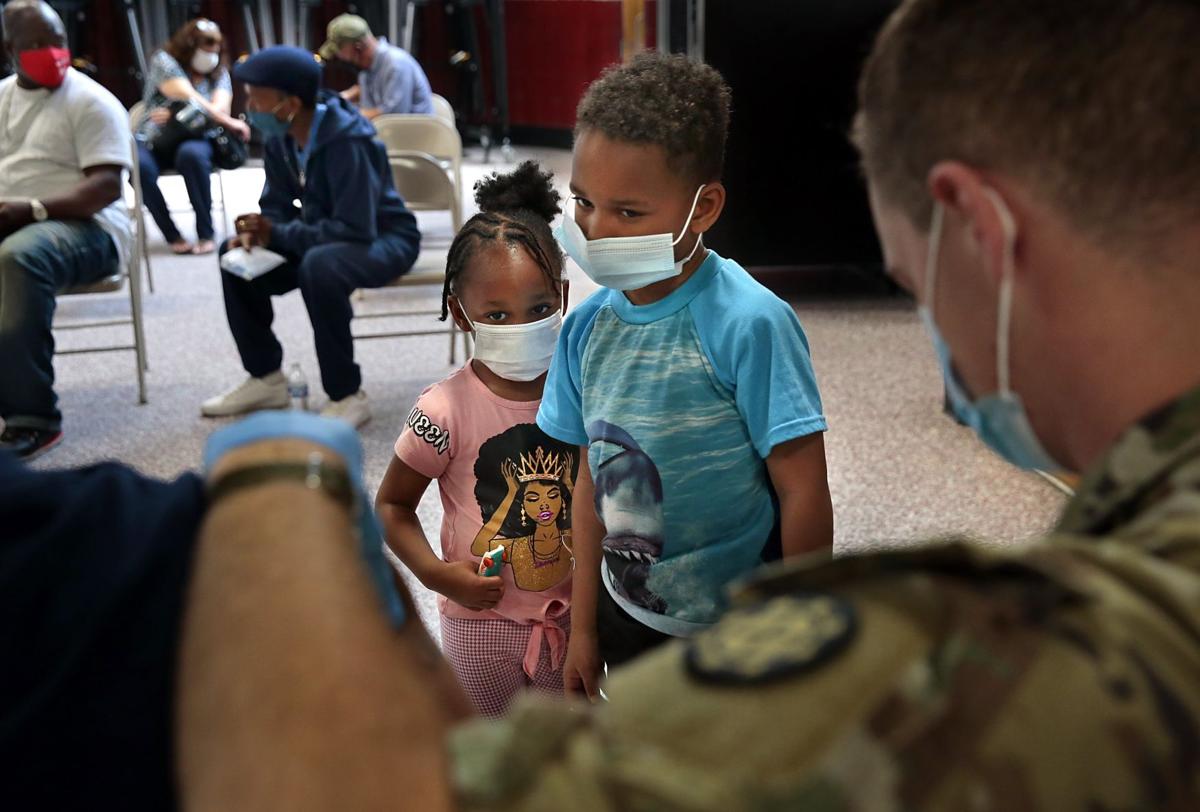 Madisyn and Tyler Taylor watch as their father Darnell Taylor receives his second Pfizer vaccine from Spc. Josh Sneed of the Missouri National Guard at the Dellwood Recreation Center on Monday, May 3, 2021. "It's over. I can travel freely now," said Taylor, who drove to Moberly, Mo. for his first shot. The clinic has a goal of 1000 vaccines a day, seeing a high of 183 and a low of 33 daily shots, according to Maj. David Chappell. "While we would like higher numbers, anybody who comes to the door for us, it's considered a win," he said. Dellwood lies in the 63136 ZIP code, which has one of the lowest vaccination rates in St. Louis region. Photo by Robert Cohen, rcohen@post-dispatch.com