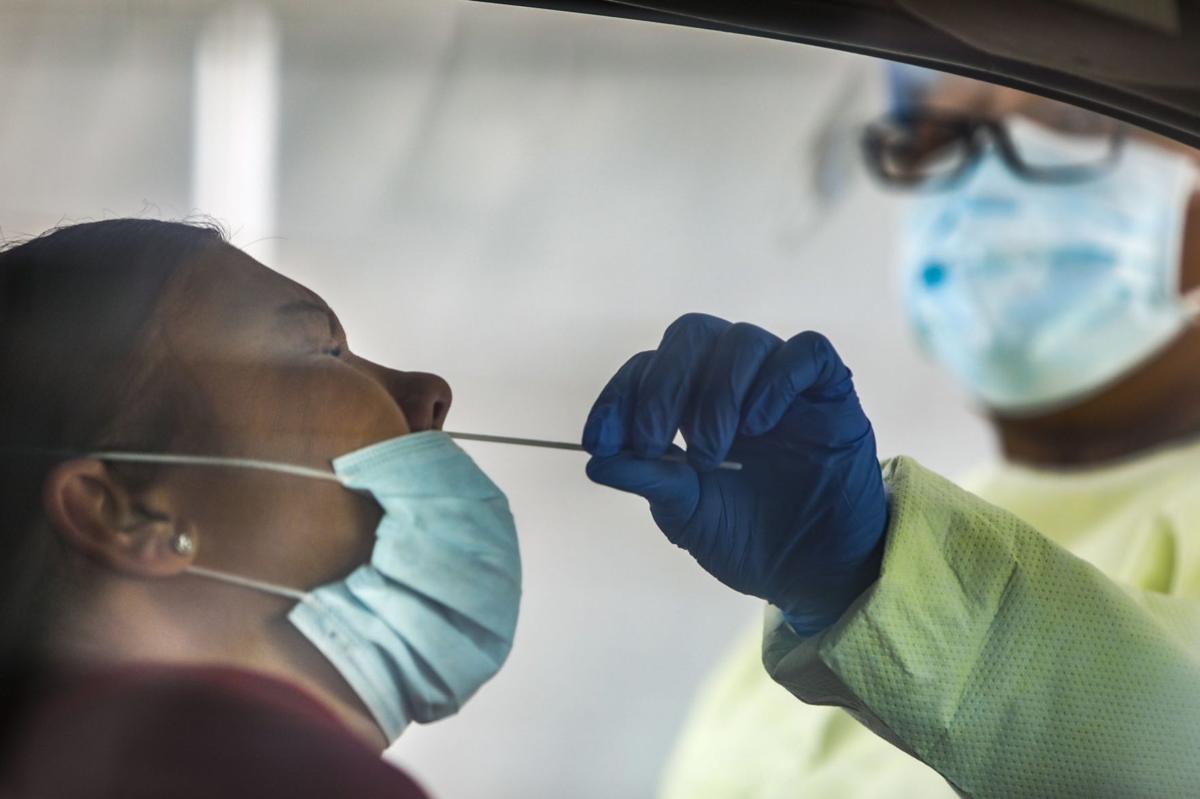 Trace Robinson receives a coronavirus test at an Affinia testing site in St. Louis on Thursday, April 23, 2020. All test recipients had been prescreened, meeting certain criteria, and had scheduled appointments at the site. Photo by Colter Peterson, cpeterson@post-dispatch.com. 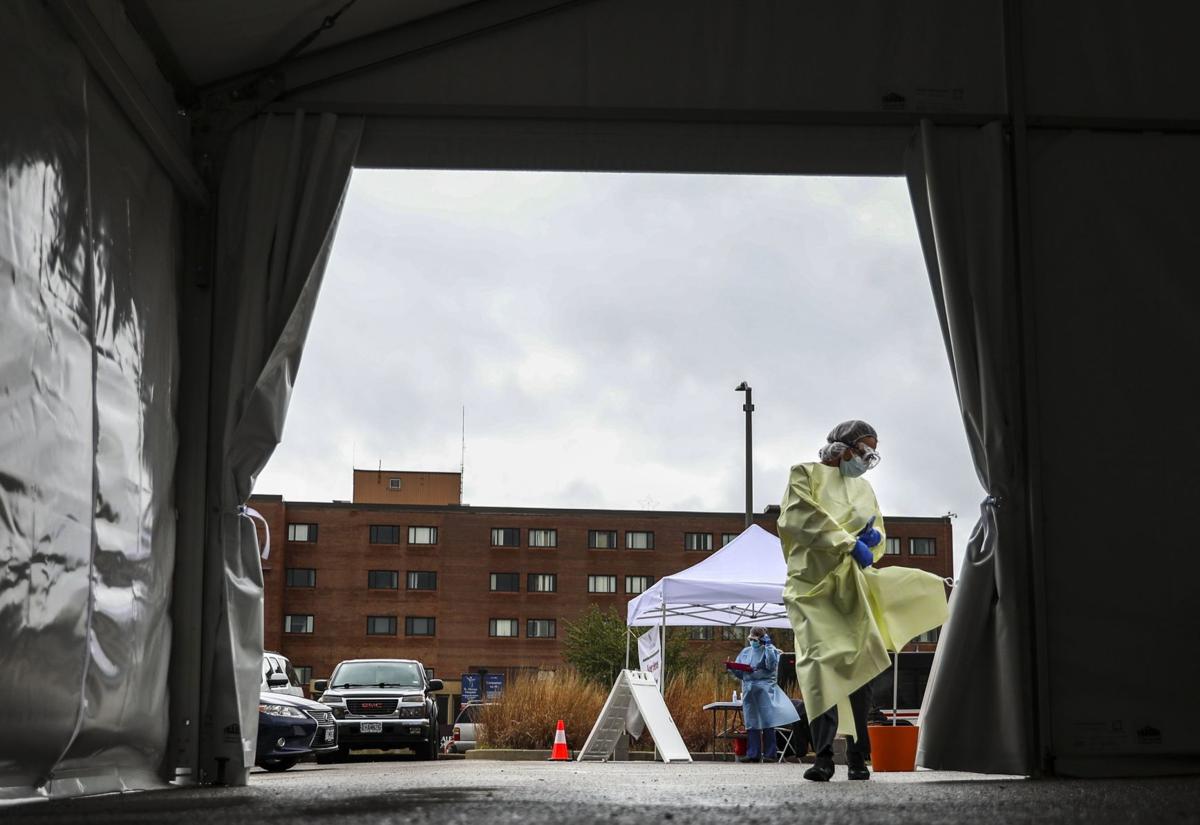 Michelle Radomski adjusts her protective gown at an Affinia testing site in St. Louis on Thursday, April 23, 2020. All test recipients had been prescreened, meeting certain criteria, and had scheduled appointments at the site. Photo by Colter Peterson, cpeterson@post-dispatch.com.

The global coronavirus outbreak is casting a stark light on the health inequities facing black and other minority communities, metro-area health officials and activists say.

“There has to be unfettered access to health care in terms of screening, testing and treatment, regardless of economic status,” said Dr. Laurie Punch, a trauma surgeon at Barnes-Jewish Hospital and associate professor at Washington University. “That is essential, and I don’t know if we’re moving fast enough on that front. … There needs to be a more robust set of social services in place to support people who are at risk.”

The federal Centers for Disease Control and Prevention recently released data showing who is susceptible to COVID-19. Many jurisdictions nationwide aren’t releasing information by race, but for those that are, a clear disparity can be seen — 33% of those who tested positive for the coronavirus are black, even though African Americans make up roughly 13% of the U.S. population.

Local numbers reflect the same reality. In St. Louis, African Americans make up 46% of the city’s population but they represent around 70% of the city’s COVID-19 cases, and most of its virus-related deaths. In St. Louis County, African Americans make up nearly 54% of all confirmed cases of COVID-19, although they are roughly 25% of the county’s population, according to the U.S. Census Bureau.

“This isn’t just about personal responsibility or more and better medical care,” said Jason Purnell, an associate professor at Washington University’s Brown School. “They are necessary, but they aren’t sufficient to explain the disparity we see. This is decades of inequality … you have concentrated pockets from which we are disinvested, which compounds the social and health problems. We’ve had that for a long time and it’s not surprising to any of us looking at it and studying it.”

The need for testing

As the impact of the coronavirus on African Americans became apparent, local activists pressed for action.

As early as March, the Rev. Darryl Gray said, black clergy and activists sought to “impress upon (Mayor Lyda Krewson) and (County Executive Sam Page) that there has already been a disproportionate number of black people affected by this.”

“They’ve been affected for different reasons, chronic illnesses, inadequate health care. … We wanted to appeal to the mayor and county executive that testing sites had to be set up in the black community, not just in the big hospitals where our folks are not comfortable going, or don’t have transportation. We need to use the federally qualified health centers.”

Federally qualified health centers such as Affinia and CareSTL are now being used as testing sites. St. Louis Department of Health Director Fredrick Echols said getting those testing sites set up was a matter of making sure they were prepared for the demand.

“We put up the sites as quickly as we could,” Echols said. “The issue was the lack of (testing) kits and the lack of (personal protective equipment). We wanted to make sure that the sites that were set up had the resources they needed.”

The city and county are also working with PrepareSTL, which formed earlier this month as a collaborative effort by the Missouri Foundation for Health and the St. Louis Regional Health Commission to bring targeted messaging during the pandemic.

PrepareSTL sends out volunteers to put up educational flyers at grocery stores and gas stations, and created kits with gloves and masks inside to distribute during food drives hosted by the Urban League.

“People have been very receptive,” said Angela Fleming-Brown, CEO of the health commission. “Overwhelmingly people wanted more. We’re trying to get out to more ZIP codes — we targeted six to start, and we’re expanding that list. We’re trying to work with churches, who are really begging for information and materials.”

At the county level, Page, in requesting that the County Council authorize spending $7 million to fight the spread of COVID-19, suggested that the money would allow the health department to aid “underserved county residents, many of whom lack access to primary critical care.”

Included in Page’s proposal is $1.5 million for a monitoring program to help those who lack primary medical care to manage virus symptoms at home. Also included is $250,000 for telehealth services for the uninsured. The County Council voted 4-3 on Tuesday to advance the bill to a final vote next week.

A large portion of the county’s African American residents reside in the north part of the county, where a coalition of mayors is asking for more assistance in protecting their communities.

“North County had the largest number of cases and all of the testing was basically in the west and south,” Berkeley Mayor Theodore Hoskins said. “I had serious concerns that they hadn’t moved a testing site here until just recently.”

Decades of discrimination and inequities have resulted in various health disadvantages for the African American community, researchers say. African Americans are more likely to suffer from preexisting conditions such as diabetes and hypertension, conditions that make it more likely that the new coronavirus will have serious adverse health effects.

Punch is one of several voices to join PrepareSTL’s efforts. Minority communities face barriers when it comes to health care, she said.

“There’s a historical distrust of the medical profession by the black community,” Punch said, explaining that she knows people who remember going to one St. Louis hospital “and having to be cared for in the basement.”

Public education about social distancing can only be so effective, according to the Rev. Starsky Wilson, president and CEO of the Deaconess Foundation. He said that many of the area’s essential workers, employed at grocery stores and gas stations, are minorities.

“The reality is some of this stuff is baked in,” Wilson said. “The best communications weren’t going to change it. … Grocery workers don’t have the ability to shelter in place. I’m remarkably privileged to be able to shelter with (my family). Every time I go to the grocery store, every cashier I’ve ever had has been a black woman. And the first people to die of this disease have been black women. I don’t think it’s an education issue as much as it’s a structural exposure issue.”

Deaconess’ first investments for relief funding will go to institutions led by black women. The United Way of Greater St. Louis, led by president and CEO Michelle Tucker, will receive $250,000 for its COVID-19 crisis response services.

“Many have jobs that demand that they still continue to go to work, which is another reason you see increased numbers,” McMillan said. “They also have to take public transit. There are so many other things that put them in proximity to more people and put them at even more risk.”

Gray said some black clergy have pressed Gov. Mike Parson to allow for mobile testing, which would mitigate the transportation problem for poorer residents who might be sick.

Mone Wilson, who lives in north St. Louis, has been able to work without having to interact with too many people, he said. He has a 7-year-old son, Santana, who hasn’t been out to see his friends in awhile.

“He understands,” Wilson said as he fished with his son in Fairground Park on a recent afternoon. Few people were around. “Me and his mom talked to him about washing his hands and things. We call it the ‘killer cold.’ You don’t want to catch the killer cold.”

Wilson is mostly concerned about his mother, who works as a delivery driver.

“I tell her, ‘Make sure you keep your mask and gloves on,’” he said. “I’m not worried about us because we’re quarantined. I’m more worried about my mom.”

Looking to the next crisis

There are deeper problems that need long-view solutions for the next time a public health crisis emerges, Fleming-Brown said.

“(Start) with a focus on racial equity as we think about, ‘How do we address these types of issues,’” she said. “There has to be a diverse staffing structure when putting those policies and procedures in place so we’re ensuring they get the resources.”

Echols acknowledged that the city’s relationship with safety net services for vulnerable populations, such as the federally qualified health centers, “wasn’t as strong as it should have been.”

“One thing we’re hoping will come out of this situation is that we’ll have better engagement with critical stakeholders, like the federally qualified health centers, and we’ll be better prepared in the future,” he said.

Problems like access to food, a lack of health insurance and other long-standing problems need to be addressed so that African Americans don’t bear the brunt of a broad health crisis, advocates say.

“COVID-19 took a veil off of what already existed,” Gray said. “The city and the county both need to acknowledge what existed prior to COVID-19, so when COVID-19 returns, as many professionals have said it will, it won’t have the same impact.”

Echols also told an aldermanic committee that he plans to hire 'a significant number' of additional staffers later this year to help with tracing.

Donations to some churches have plummeted, and many charities have had to cancel crucial fundraising events such as galas, bike races and walkathons.

More than 22 million Americans have filed for unemployment benefits after losing jobs over the past month.

Racial toll of coronavirus grows even starker in St. Louis and across the nation

St. Louis resident Randy Barnes is grappling not just with the emotional toll of losing his brother to the coronavirus, but also with the feeling that his brother’s case was not taken seriously.

Officials across the region and country say African Americans are disprportionally affected by the coronavirus.

The Missouri NAACP is pressing Gov. Parson for answers about what the state is doing to help black residents get tested and treated for the coronavirus.

Trace Robinson receives a coronavirus test at an Affinia testing site in St. Louis on Thursday, April 23, 2020. All test recipients had been prescreened, meeting certain criteria, and had scheduled appointments at the site. Photo by Colter Peterson, cpeterson@post-dispatch.com.

Michelle Radomski adjusts her protective gown at an Affinia testing site in St. Louis on Thursday, April 23, 2020. All test recipients had been prescreened, meeting certain criteria, and had scheduled appointments at the site. Photo by Colter Peterson, cpeterson@post-dispatch.com.