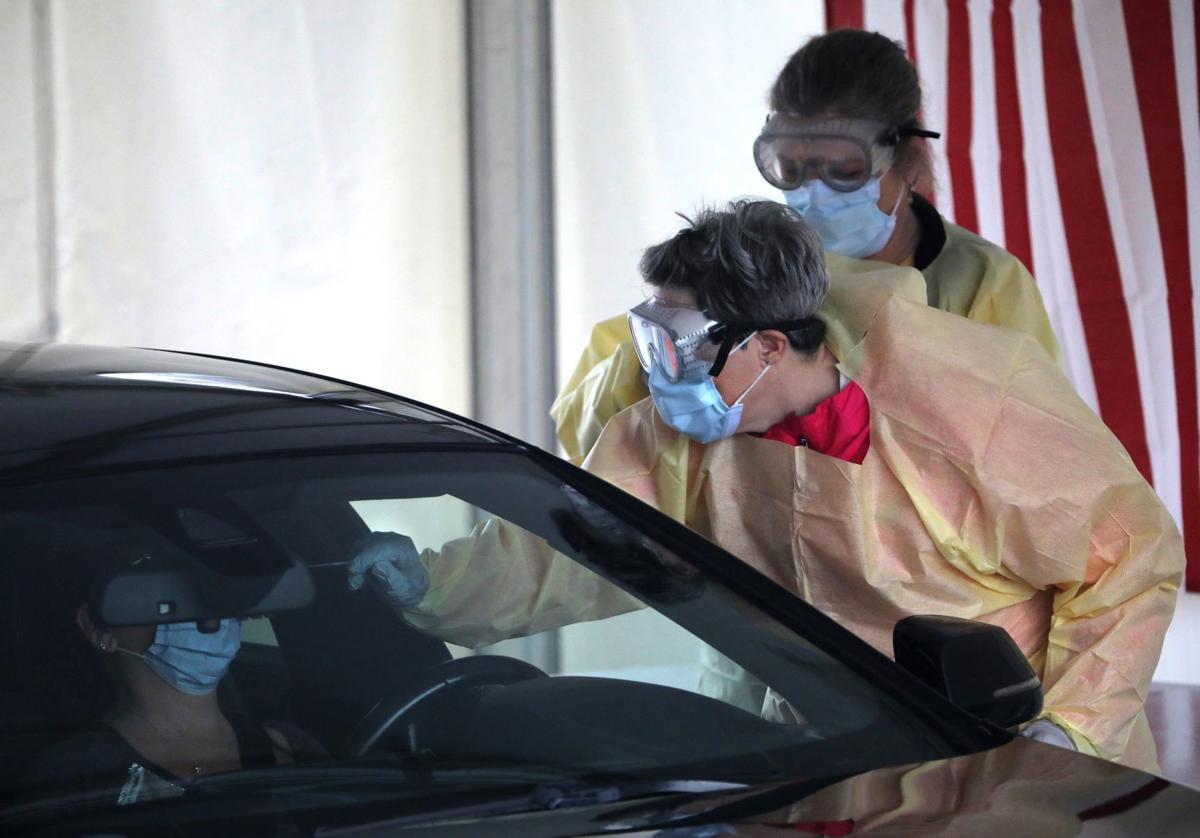 Mercy nurses collect samples from a patient wearing a mask at a drive-thru coronavirus testing center on Thursday, March 19, 2020, outside the Mercy Virtual Care Center in Chesterfield. Photo by Laurie Skrivan, lskrivan@post-dispatch.com 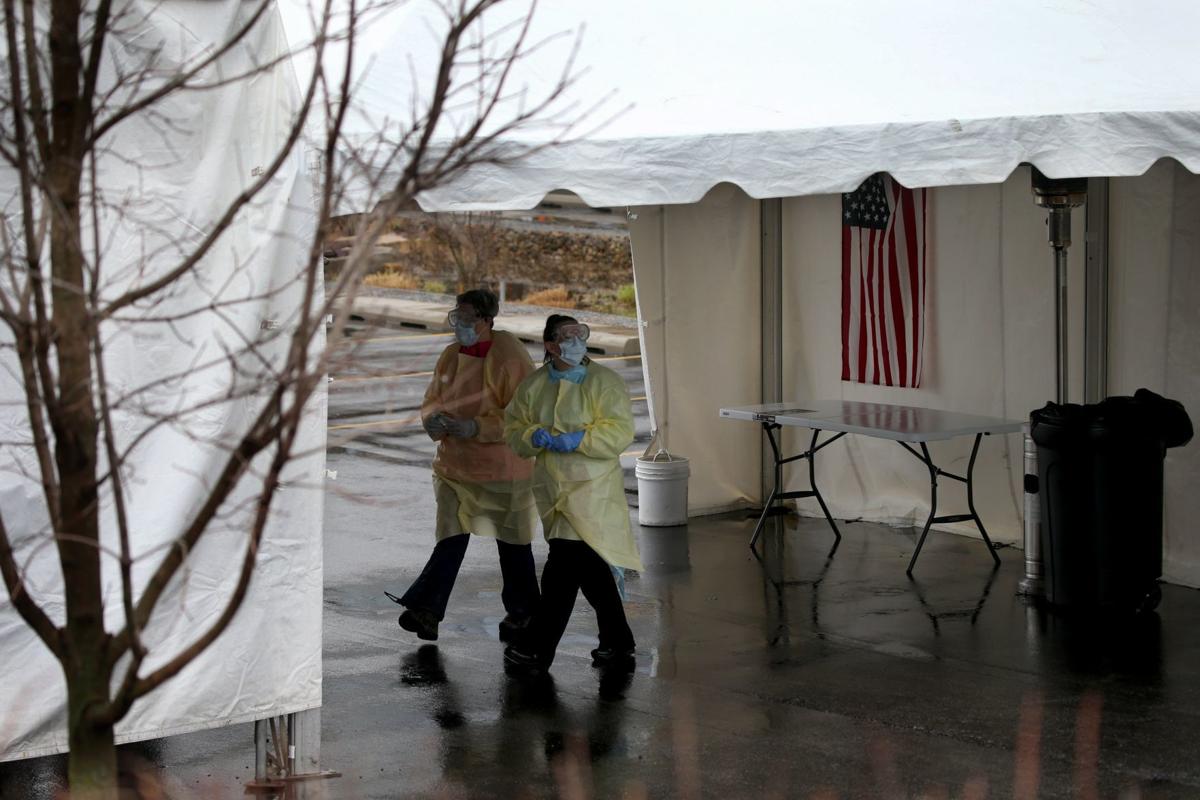 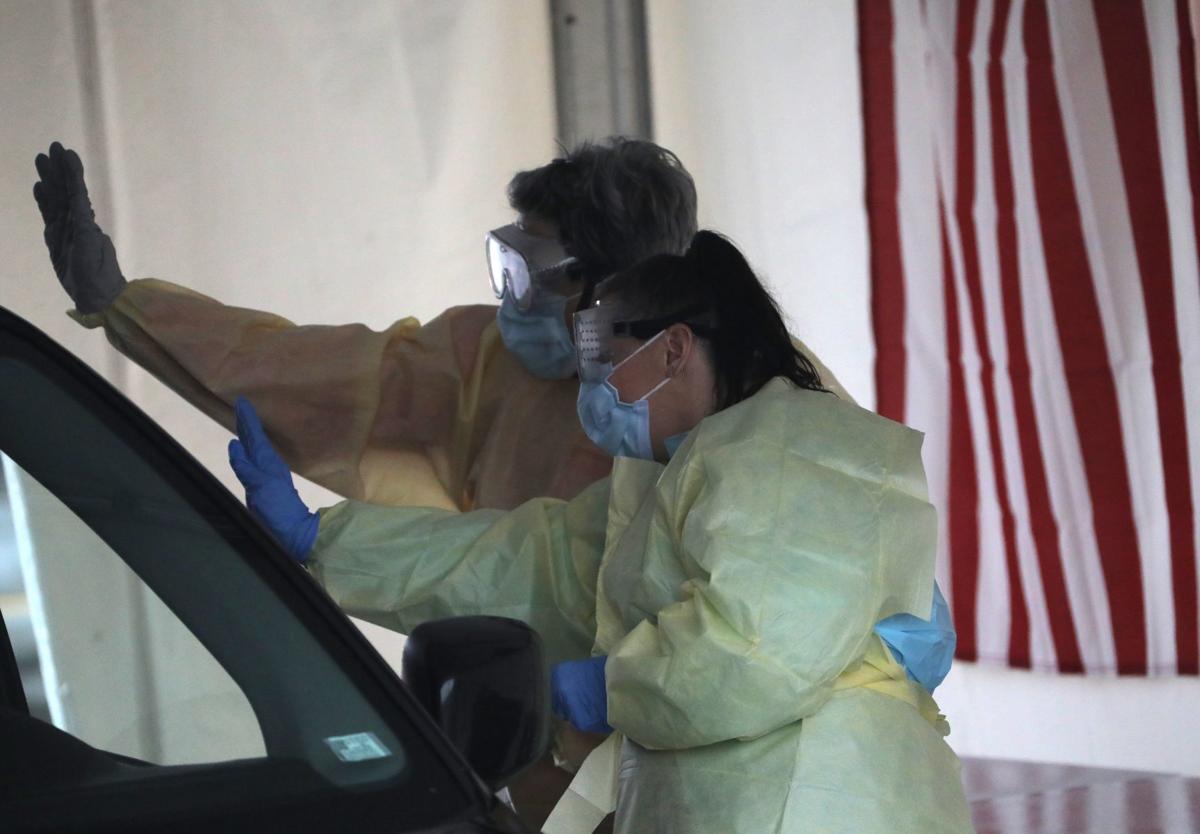 Mercy nurses wave to people in a car after collecting samples from a patient at a coronavirus drive-thru testing center on Thursday, March 19, 2020, outside the Mercy Virtual Care Center in Chesterfield. It is one of several sites opened in the region. Photo by Laurie Skrivan, lskrivan@post-dispatch.com

ST. LOUIS — As health care providers and labs across the St. Louis region scramble to ramp up testing for the coronavirus, most sick people still can’t get tested.

There has been some progress: Three weeks ago, the federal government was still testing Missouri samples for COVID-19 at the Centers for Disease Control and Prevention in Atlanta. But private labs have been developing their own tests, and on Monday the U.S. Food and Drug Administration cleared the way for more local labs, hospitals and universities to test samples on-site to expand capacity.

Missouri Gov. Mike Parson said Thursday that the Department of Health and Senior Services has signed a contract with the national lab, Quest Diagnostics, and plans to get contracts with at least two other companies to expand the state's testing.

A few Missouri labs launched their own tests this week. On Monday, Barnes-Jewish Hospital Clinical Laboratories and the Washington University School of Medicine launched the state’s first hospital-based lab test for patients at BJC and St. Louis Children’s Hospital suspected of being infected with the virus.

Hospitals across the St. Louis area were working to open drive-thru sites to collect samples from those who may be infected. As of Thursday, there were at least seven collection sites operating in the metro area. At least six more were set to open within the next week, according to interviews with health departments and local hospital systems.

Still, national shortages of testing supplies like swabs and reagents used in the analysis of samples have lead to strict rules on who can get tested.

In Missouri and Illinois, for example, state health departments say people qualify if they have respiratory symptoms severe enough to be hospitalized and they have tested negative for other possible causes, such as flu. People also may get tested if they have a fever or respiratory symptoms and have had direct contact with someone with a confirmed case of COVID-19, or have traveled to an area with a known large outbreak in the U.S. or abroad, including the Seattle area.

The rules on testing may obscure the true scope of the COVID-19 pandemic and leave sick people like Eva Heward, 54, of St. Peters, in the dark.

Heward over the last week has developed many key COVID-19 symptoms — a dry cough, a fever, trouble breathing — but has repeatedly been refused a test.

She is considered high-risk, because she has asthma and an autoimmune disease that damages her thyroid.

Heward was told by an urgent care provider, her primary care doctor and a representative on the Mercy Hospital system COVID-19 testing hotline that she can’t get a test.

“They all said you have to have contact with someone who has had it, but how do I know? They’re not testing,” she said.

Dr. Randall Williams, director of the Missouri Department of Health and Senior Services, said he hopes to loosen requirements so that by April 1 anyone with symptoms can get tested.

So far, the state has had to hold back on testing to save testing supplies at the Missouri State Public Health Laboratory to avoid running out for the most high-impact cases, like people who have been hospitalized.

“We purposely rationed our tests,” Williams said Tuesday. In about 10 days, he said, “we won’t be doing that.”

St. Louis’ major hospital systems have taken the lead in the first step of the testing process: collecting samples.

The Mercy Hospital system was the first in the region to open a drive-thru sample collection site, outside a Mercy building in Chesterfield that does not see patients.

Between Saturday and Wednesday, workers decked in protective gear at the site had collected 322 samples, said Mercy spokesman Joe Poelker.

All patients that hope to be tested by Mercy, and other drive-thru collection sites, must first be screened. Mercy set up a COVID-19 Clinical Support Line for people to call to see if they were eligible.

Early on, the number of calls swamped the system.

Maureen Wysocki, for example, waited for an hour on the hotline Tuesday after her primary care provider told her to call to ask about getting her daughter tested. At the one-hour mark, the call simply cut off, Wysocki said.

She called again, only to again be cut off at the hour mark.

“It was definitively frustrating,” she said. “And if it happened twice to me, I’m sure a lot of other people had the same thing.”

Mercy also hopes to open three new testing locations in the St. Louis area within about a week, Poelker said.

Instead of a screening hotline, SSM is using the hospital network’s virtual visit platform which patients normally use for simple telemedicine visits. Patients answer two sets of questionnaires on the platform to see if they qualify for testing before they are forwarded to a nurse practitioner or physician.

Virtual visits typically number 40 or 50 a day, but now are hovering at 400 a day, said Powell. In contrast, SSM’s sites have collected just 10 to 15 samples a day from those who qualified, Powell said.

Testing will be free, even for those without insurance, under legislation passed Wednesday night by Congress.

Results are typically taking one to three days, according to hospital officials.

After swabs are collected, they’re sent to labs tasked with finding snippets of the new coronavirus’ genetic material.

The Missouri State Public Health Laboratory was the state’s first testing lab. Testing began there Feb. 27 and by Wednesday night it had processed 330 samples. Williams said Wednesday the lab has a capacity to test about 160 a day, but has averaged about 60 to 70 daily. The lab has two weeks of testing materials on hand with more expected to arrive from the federal government.

But private laboratories are quickly taking on the bulk of Missouri’s testing.

Carolyn Henry, dean of the the Mizzou college of veterinary medicine, said that once it was operational the lab anticipated that is could increase its capacity to 1,500 tests a day if needed.

The American Clinical Laboratory Association estimates that if there are no delays or shortages of supplies, commercial capacity across the country will exceed 280,000 tests per week by April 1.

Janelle O’Dea and Jack Suntrup of the Post-Dispatch contributed to this report.

Mercy nurses collect samples from a patient wearing a mask at a drive-thru coronavirus testing center on Thursday, March 19, 2020, outside the Mercy Virtual Care Center in Chesterfield. Photo by Laurie Skrivan, lskrivan@post-dispatch.com

Mercy nurses wave to people in a car after collecting samples from a patient at a coronavirus drive-thru testing center on Thursday, March 19, 2020, outside the Mercy Virtual Care Center in Chesterfield. It is one of several sites opened in the region. Photo by Laurie Skrivan, lskrivan@post-dispatch.com 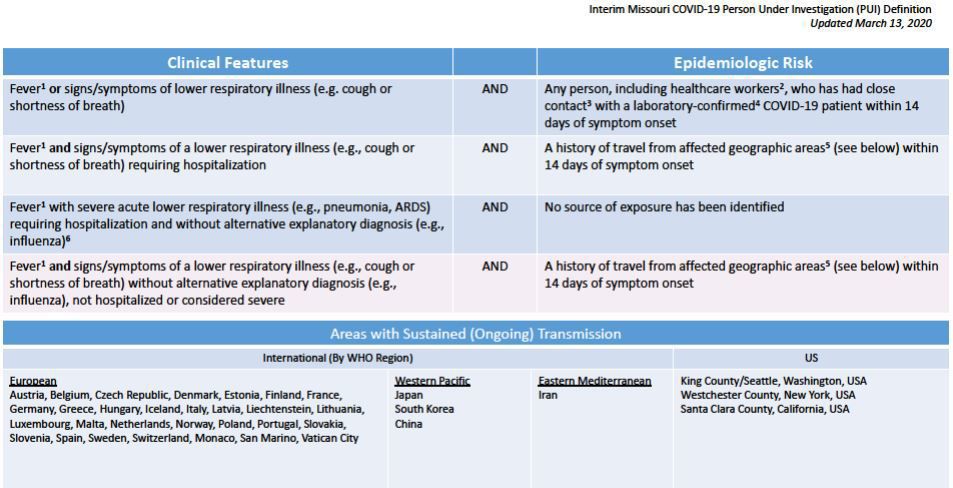