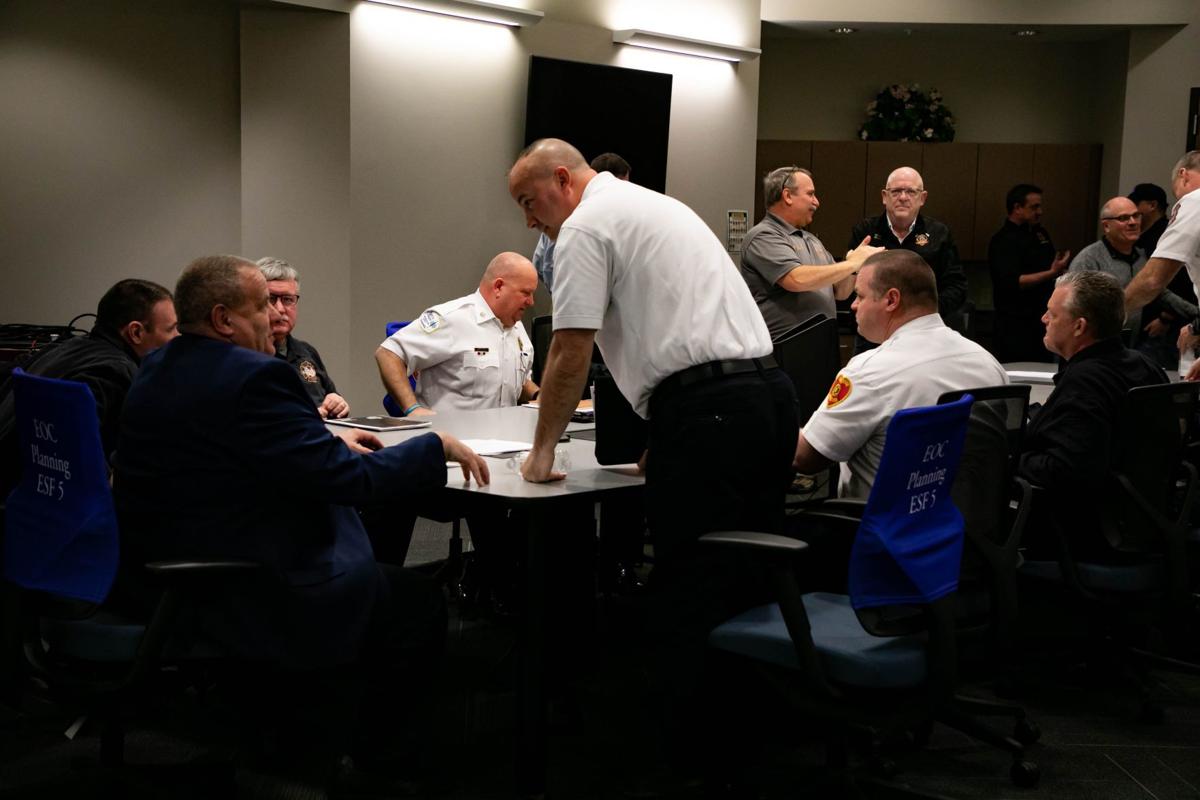 Fire and EMS leaders from St. Louis County talk after a briefing where they discussed next steps after a coronavirus case was confirmed in St. Louis County. The group is at the St. Louis County Office of Emergency Management on Sunday, March 8, 2020. Photo by Rachel Ellis 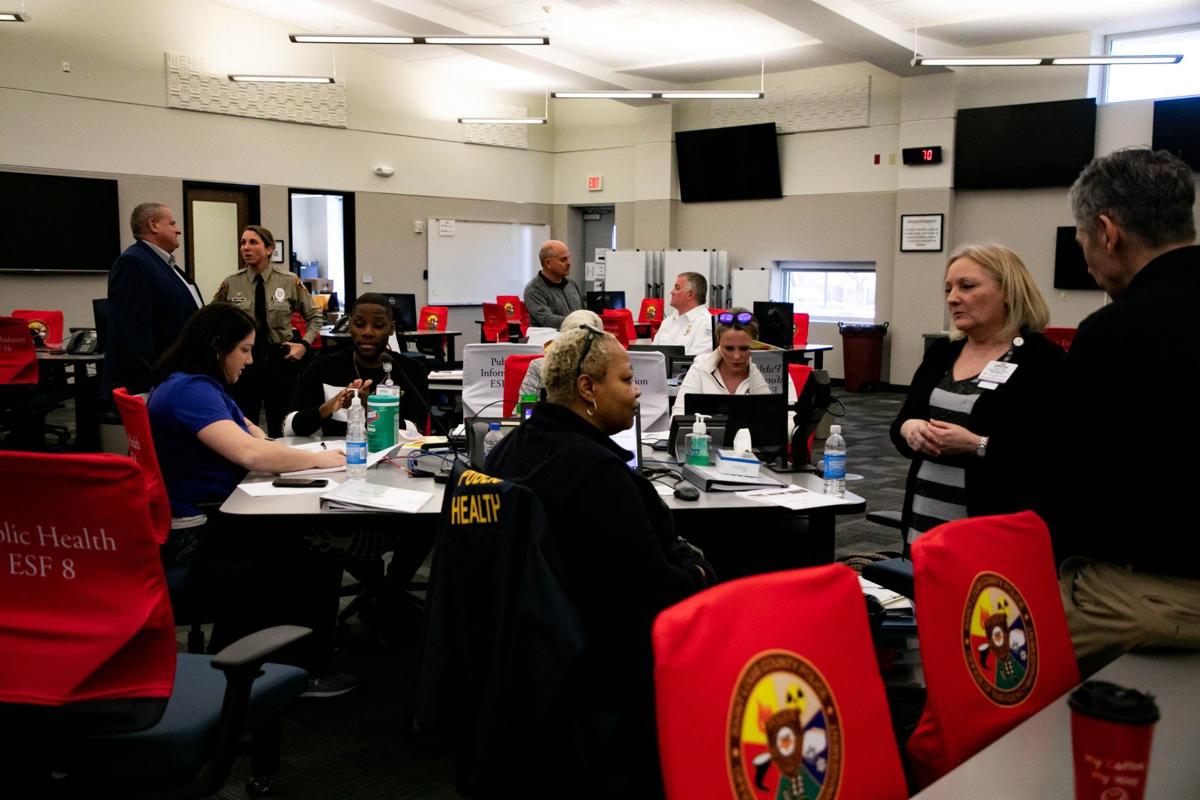 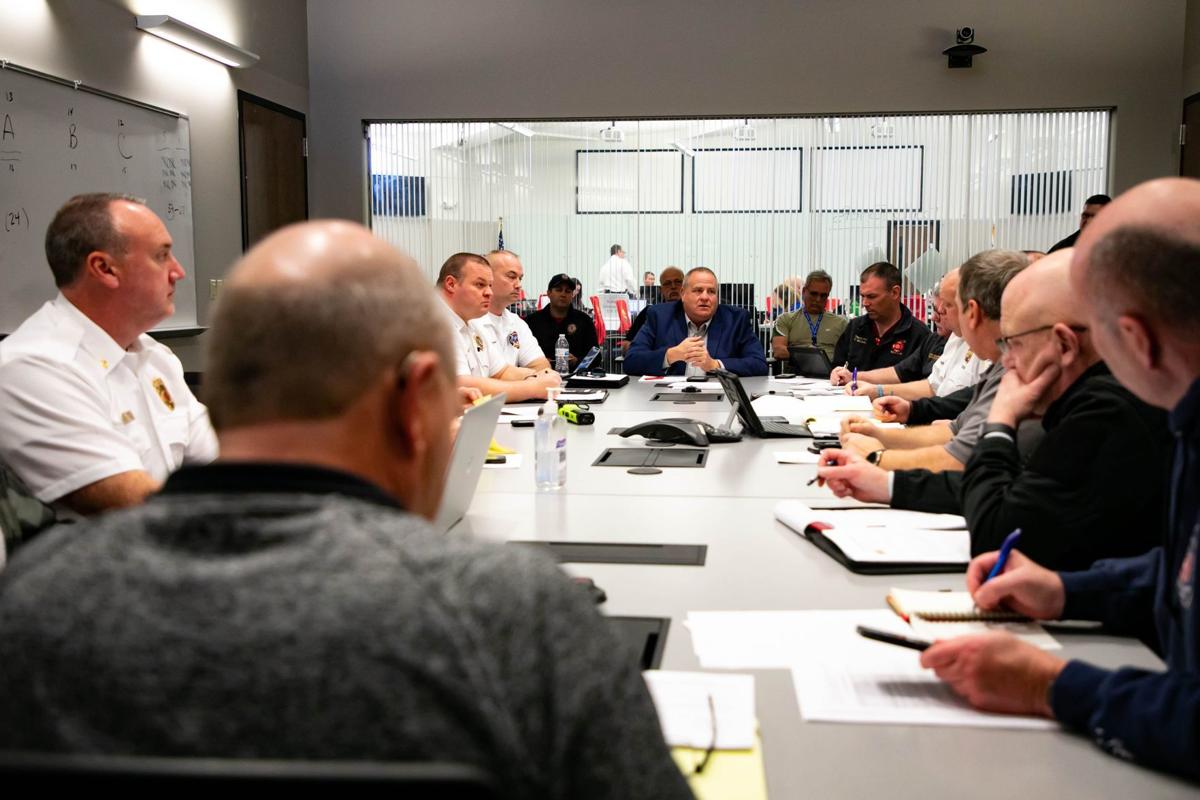 Chief Greg Brown, regional mutual aid coordinator for St. Louis County, sits at the head of the table among fire and EMS leaders for a briefing at the St. Louis County Office of Emergency Management on Sunday, March 8, 2020, after the first coronavirus case was confirmed Saturday in St. Louis County. Photo by Rachel Ellis 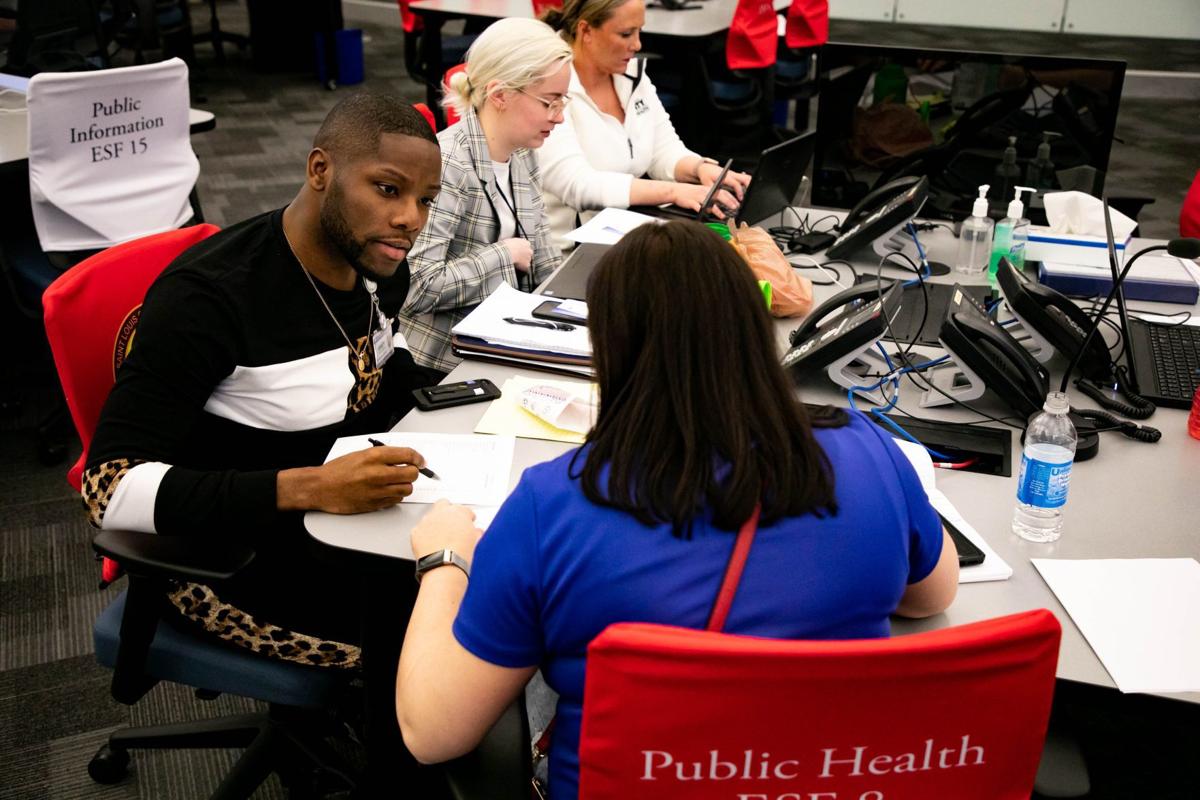 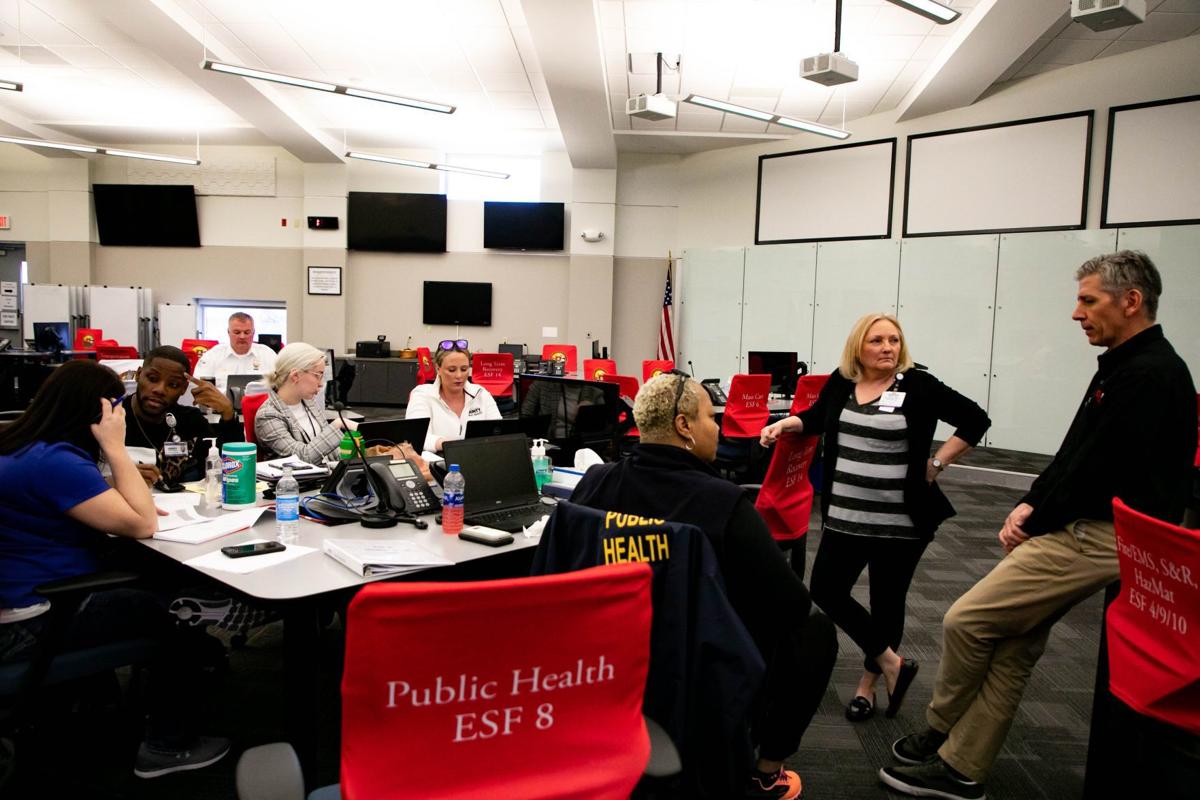 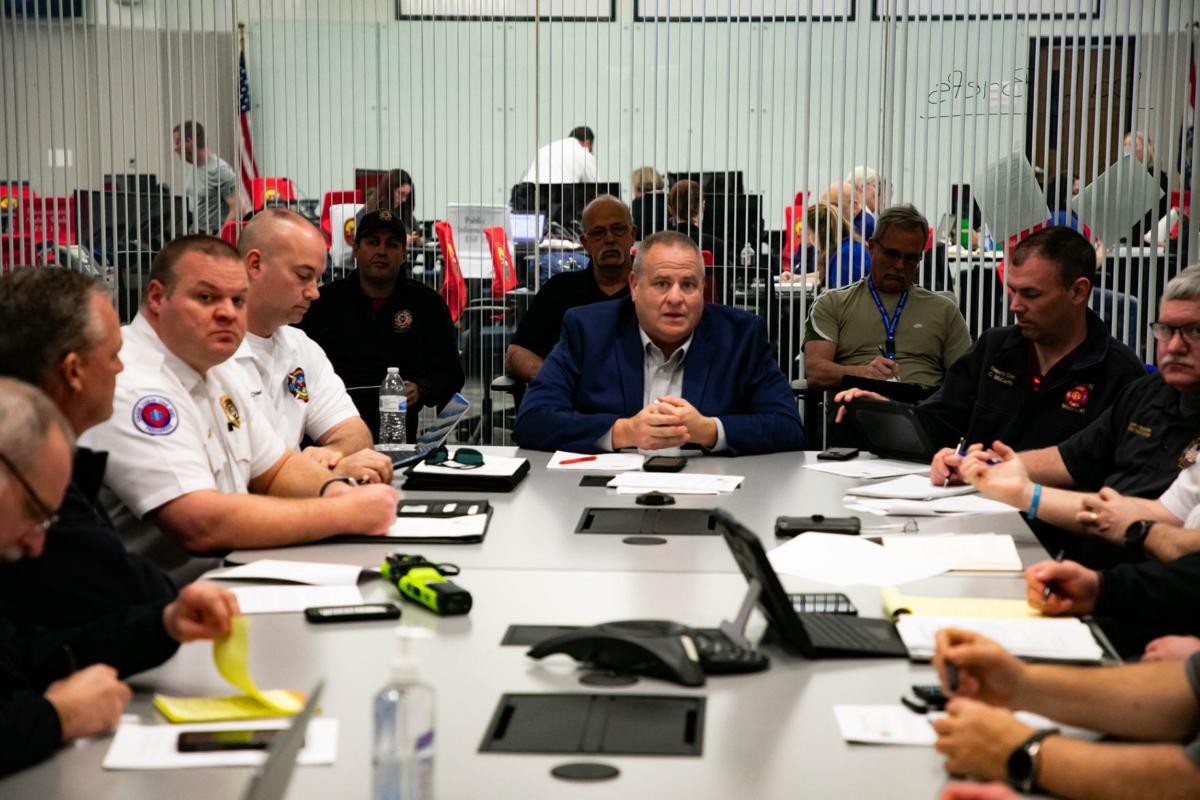 Chief Greg Brown, regional mutual aid coordinator for St. Louis County, sits at the head of the table with fire and EMS leaders for a briefing at the St. Louis County Office of Emergency Management on Sunday, March 8, 2020, after the first coronavirus case was confirmed Saturday in St. Louis County. Photo by Rachel Ellis

Villa Duchesne and Oak Hill School will close Monday after administrators learned that a St. Louis County woman infected with the coronavirus is the older sister of a Villa Duchesne student.

Moreover, a message from the schools to parents, circulating on social media, warns that the father and sister of the infected patient attended a school father-daughter dance Saturday night at the Ritz-Carlton in Clayton. They also apparently attended a pre-dance gathering at the house of a Villa student.

St. Louis County Executive Sam Page said Sunday that the patient’s family had been told on Thursday to self quarantine at their home in Ladue. Page said the patient’s father had not followed health department instructions. Page spoke at a news conference Sunday evening.

County health officials told the man on Sunday, Page said, “that he must remain in his home or they will issue a formal quarantine that will require him and the rest of his family to stay in their home by the force of law.”

The Villa Duchesne message advises students and parents, “If you attended the dance, please be attentive to any symptoms you are experiencing.”

The schools are independent Catholic schools in Frontenac. Villa is an all-girls school for grades seven through 12, while Oak Hill serves coed preschoolers through sixth graders.

A “handful” of seniors from John Burroughs School also may have been exposed to the virus Saturday when they gathered at the house where the pre-dance event had been held earlier, according to an email sent Sunday night by Andy Abbott, head of John Burroughs School. The family who lives at that house includes children who attend Villa and Burroughs.

“The likelihood of any of the Burroughs students contracting the virus is extraordinarily low,” Abbott wrote, adding that the students have been asked not to attend school “until we have more information.”

With Missouri’s first COVID-19 case confirmed on Saturday, health officials began the tedious work of determining with whom the woman had close contact since returning home from Italy.

The woman, in her 20s, flew into Chicago O’Hare International Airport on Monday, stayed with a friend, then took an Amtrak train home to St. Louis on Wednesday, according to Doug Moore, spokesman for Page. The woman attends an out-of-state school and had been studying abroad.

Because she was starting to feel ill, the woman contacted the St. Louis County Department of Public Health on Thursday, Moore said. She apparently stayed home and did not have contact with anyone until she was instructed on Friday to go to Mercy Hospital in Creve Coeur for testing.

Hospital staff were notified before the woman arrived, so they were able to protect themselves and isolate her from others.

Officials had said the woman was quarantining herself, along with her parents, who were not showing symptoms. But on Sunday, reports about the father-daughter dance began circulating.

“We are communicating with the St. Louis County Department of Public Health and sharing everything that we know with them,” stated Villa Duchesne and Oak Hill communications director Alice Dickherber in an email. “We will work with officials to ensure we are doing everything possible to mitigate risk and to maintain our safe environment. We are committed to the health and safety of our community and we will follow the guidance of public health officials as we plan for the coming days.”

On Saturday, state and county officials announced the woman’s test result as “presumptive positive.” The result still needs to be confirmed by the federal Centers for Disease Control and Prevention, which takes a few days. Page said it is “highly likely” the CDC will confirm it.

On Sunday, Amtrak issued a news release stating that the woman had been on Amtrak train 303. “Amtrak is notifying passengers and employees who may have been on the same train, and as a precaution, we have taken the train out of service for comprehensive cleaning and disinfection, and are also working to do a thorough disinfection of the Chicago and St. Louis stations,” the statement read.

Investigators with the county health department spent several hours Saturday interviewing the woman to determine whether she might have had close contact with anyone else who could be at risk.

“We go through an extensive interviewing process with the person,” that follows CDC protocols, said Spring Schmidt, acting co-director of the county health department. “We spent several hours with her yesterday going over her movements and travel history … . It’s a difficult process that requires a lot of careful interviewing and coaching and memory prompts.”

As investigators learn more, Schmidt said, they are in contact with CDC officials to determine how far back they should document the woman’s movements, who’s at risk of exposure and what other health agencies outside of the county may need to be involved.

The process of determining who needs to be notified, checked for symptoms and tested is unfolding, Schmidt said. Those contacts may lead to more investigations, as well.

“It’s a cascading series of potential calls,” she said. “We won’t know until it starts to move forward and it continues to generate potential contact.”

“We are providing extra boots on the ground here. There are a lot of contacts that need to made,” Williams said. “We are looking at her travel schedule, being on trains and planes and staying in hotels, and local contacts.”

Williams said he wanted to stress that only those in close and prolonged contact are at risk.

“It’s a really important part of the message,” he said, “that when we say contact, we mean 15 to 30 minutes within 6 feet of the person.”

On Sunday, the Missouri Veterans Commission restricted access to its seven skilled nursing homes spread across Missouri, including one in the St. Louis area north of Bellefontaine Neighbors.

No visitors, vendors nor volunteers are allowed in the facilities until further notice, according to the commission’s website. Staff is helping families communicate with each other via video chat services.

Starting Monday, Williams said, testing kits for COVID-19 will be available commercially. Physicians can order tests for their patients who they determine could be at risk, he said, without having to consult public health officials or meet CDC guidelines that include travel history, known contact and symptoms.

“It’s between the physician and the patient,” Williams said. “You can go to the doctor tomorrow and say, ‘I want a test,’ and they don’t have to use the CDC criteria to order it.”

Using a specific throat swab, doctors can send the sample to a diagnostic lab for testing, Williams said. All positive cases must be reported to local health departments.

That could mean a dramatic increase in the number of cases reported, Williams acknowledged. With $9.9 million that Missouri will receive under emergency federal legislation approved last week, he said, public health staff will be able to adapt.

“We are clearly prepared,” he said.

The center has been activated during natural disasters and other threats, such as the H1N1 flu outbreak in 2009. It was partly activated Friday and on Sunday was teeming with nearly 100 people.

“We must be prepared and educated and ready to respond at a moment’s notice,” Page stated when the center was activated. “We have the infrastructure in place, and this is an opportunity to make sure we can collaborate in real time and have the right people at the table.”

Annika Merrilees and Blythe Bernhard of the Post-Dispatch contributed to this report.

More than two days after an employee’s possible case of coronavirus prompted the temporary closure of its Creve Coeur campus, Bayer said late Wednesday the individual's test came back negative and that it would reopen the worksite Thursday.

Ladue college student was Missouri's patient zero: 'Never gonna live this one down'

Her family has shunned interviews, but the college student has not been shy on social media.

Sultan: Kids are likely more worried about coronavirus than it may appear

Parents should begin by dealing with our own anxiety.

The woman, a university student, had studied abroad in Italy before returning home to the St. Louis area earlier this week, officials said.

Stay up to date on the latest St. Louis news surrounding the coronavirus

To help our readers keep up with news, we've created a free daily email newsletter.

As concern for coronavirus spreads, Cardinals encourage players to pre-sign items for fans

JUPITER, Fla. — The Cardinals plan to outfit players with baseballs and other items that they can sign and pass out to fans as a proactive mea…

Fire and EMS leaders from St. Louis County talk after a briefing where they discussed next steps after a coronavirus case was confirmed in St. Louis County. The group is at the St. Louis County Office of Emergency Management on Sunday, March 8, 2020. Photo by Rachel Ellis

Chief Greg Brown, regional mutual aid coordinator for St. Louis County, sits at the head of the table among fire and EMS leaders for a briefing at the St. Louis County Office of Emergency Management on Sunday, March 8, 2020, after the first coronavirus case was confirmed Saturday in St. Louis County. Photo by Rachel Ellis

Chief Greg Brown, regional mutual aid coordinator for St. Louis County, sits at the head of the table with fire and EMS leaders for a briefing at the St. Louis County Office of Emergency Management on Sunday, March 8, 2020, after the first coronavirus case was confirmed Saturday in St. Louis County. Photo by Rachel Ellis