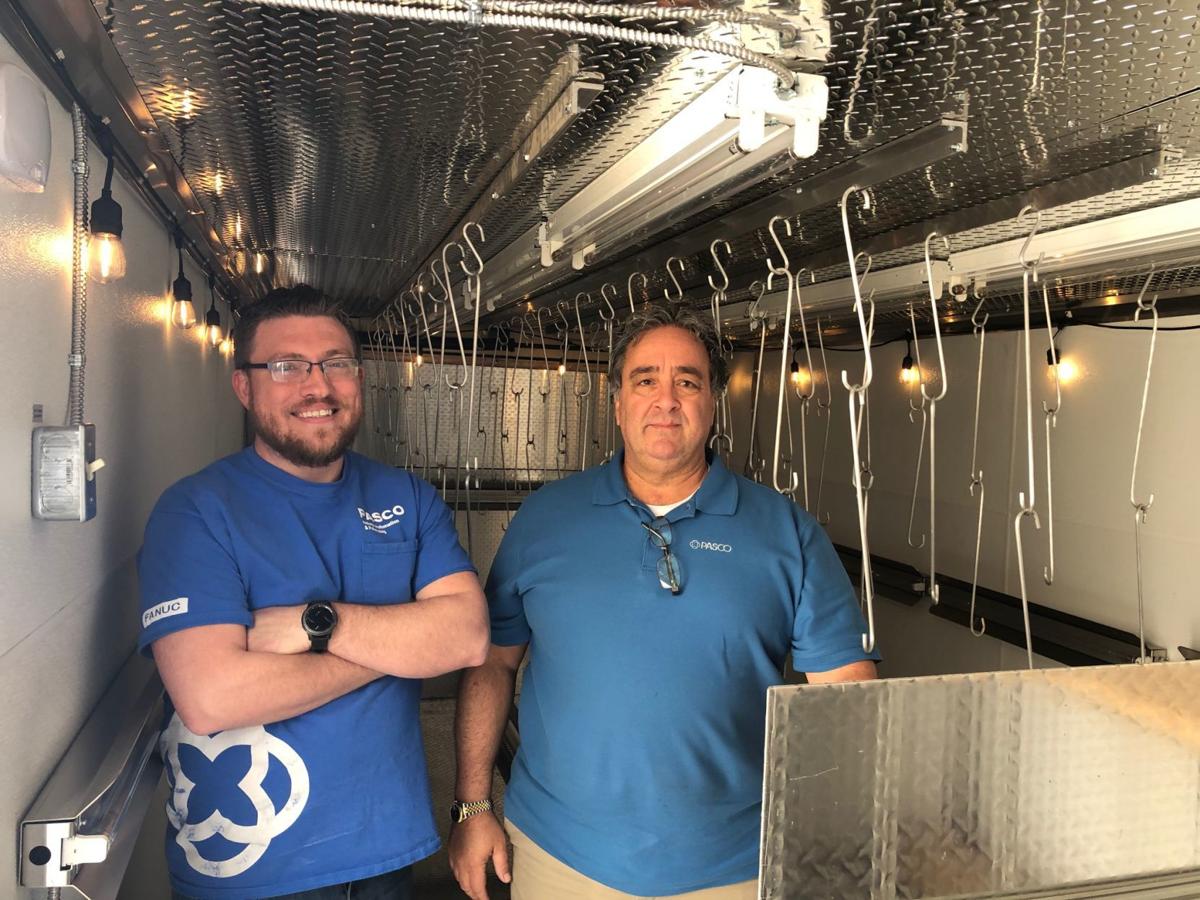 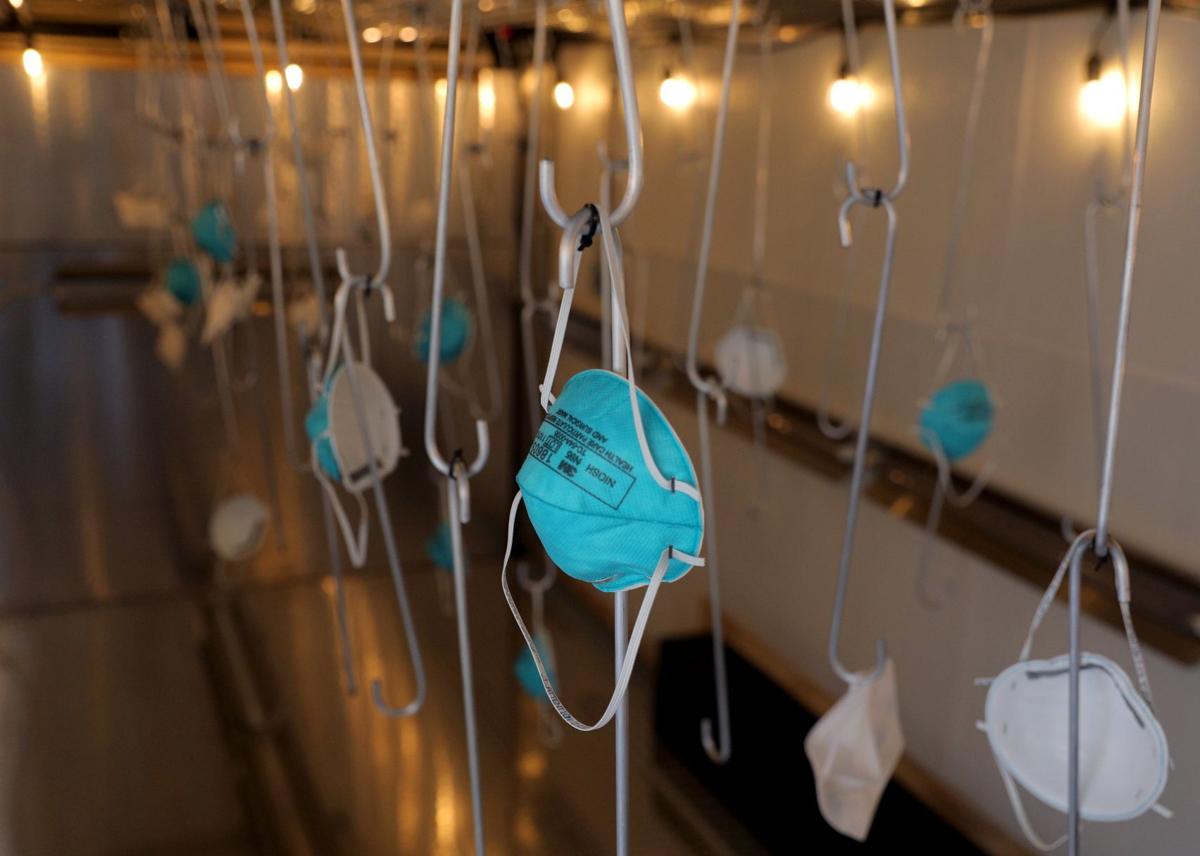 Medical masks hang in a trailer outside Cardinal Glennon and SLU Hospital on Wednesday, April 22, 2020, for sterilization via direct UV light. Local robotic packaging developer PASCO designed and donated the trailer that zaps 180 masks at once. With personal protective equipment scarce in the coronavirus pandemic, making masks available for reuse is critical for hospitals. Photo by Christian Gooden, cgooden@post-dispatch.com

MAPLEWOOD — The hospitals’ staffs were using a microwavelike box to sanitize two N95 masks at a time using ultraviolet light — zapping them for one minute before having to turn them over and zap them again.

Desperate for ways to safely reuse the dwindling masks — which health care workers need to protect themselves from the coronavirus — two neighboring SSM Health hospitals in St. Louis had managed to get five of the light boxes to share between them.

“The process took essentially a minute per mask,” said Heather Jolley, administrative director of nursing operations at Cardinal Glennon. “This was very labor intensive, as you can imagine.”

That all changed last week when a 20-by-8-foot trailer was delivered and parked on a street between the two hospitals.

With shiny aluminum panels on the walls and 30 strategically placed UV-C lightbulbs and hooks — the trailer is capable of sanitizing 180 masks in 10 minutes.

Plans are in the works to use the trailer to sanitize providers’ masks from SSM’s six other St. Louis-area hospitals as well as EMS teams — amounting to up 1,000 masks per day.

“Since we have this incredible trailer, we want to share this with other people in need,” Jolley said.

The trailer was designed and donated by PASCO in Maplewood. The 48-year-old family-owned business develops massive robotic packaging systems for everything from paint to pet food.

A conversation with a friend and emergency physician at Cardinal Glennon got PASCO Chief Operating Officer Jim Nardulli thinking about his company’s system to package eggs.

The egg-packing robot is outfitted with UV lights that destroy pathogens endemic in the poultry industry.

Nardulli thought about how Cardinal Glennon was disinfecting two masks at a time with a small box. “That just seemed crazy given the sheer number of these things,” he said. “I thought, ‘Why couldn’t we dig into this science and make just a really big one?”

The concept seemed simple, but Nardulli soon learned it was anything but.

The company had just purchased a trailer it was going to use to transport tools. Nardulli thought it would work as a “ginormous” light box.

He had a team cover its chamber with polished aluminum panels, perfect reflectors for UV light. He then searched for the special virus-destroying UV lights. Turns out many people may be buying the lights for their own use.

“We scoured the world and could only find 30 of these bulbs,” Nardulli said. “That’s all we could find for any price anywhere.”

He also couldn’t find fixtures to mount the lights. So they built their own.

Next came designing a series of hooks hanging at different lengths so every single mask would get adequate exposure.

To make sure his system worked, Nardulli needed a special meter capable of measuring the amount of light getting to each spot in the trailer. He found one that was going to take three weeks to ship, but he was not willing to wait.

Nardulli came across a doctor at Barnes-Jewish Hospital who let him borrow his.

By the time Nardulli drove the trailer to the hospitals and dropped it off, its creation had taken about four weeks and involved nearly all of the company’s 55 employees, from nuclear engineers to field service technicians.

“Everybody really felt like they were doing something for the community,” he said. “Given everything the world is going through, it was good to have something to dig into.”

The N95 masks are tight-fitting and capable of blocking 95% of the very small particles transmitted in the air by coughs, sneezes and medical procedures.

They are approved for one-time use, which has resulted in a shortage as the worldwide coronavirus pandemic increased demand. Many health care providers have been forced to reuse their masks.

In an effort to protect workers, hospital systems developed ways to try to sanitize the masks before they are used again.

SSM hospitals as well as BJC hospitals in the St. Louis area mainly rely on a process known as hydrogen peroxide gas sterilization, a low-temperature process commonly used in hospitals to sterilize surgical tools that could be damaged by heat.

Workers at Mercy have largely not had to reuse their masks, but the hospital system has practiced using hydrogen peroxide misting equipment, which it uses to disinfect rooms, to sanitize masks if necessary, according to Mercy spokeswoman Bethany Pope.

The study showed both the hydrogen peroxide gas technique and the UV light process eliminated detectable levels of the virus.

On Wednesday, Missouri Gov. Mike Parson announced that next week, the state will use emergency federal funds to bring in a decontamination system developed by nonprofit Battelle in Columbus, Ohio, that uses hydrogen peroxide vapor.

The system will be set up in Jefferson City. Health care workers and first responders will drop off masks at up to 13 locations throughout the state, following Battelle’s packaging directions. The masks will be returned to the location 72 hours later at no cost.

Battelle’s system has been approved for emergency use by the federal Food and Drug Administration. Battelle’s research shows the masks can be reused 20 times after cleaning and still function properly.

Area hospital systems vary in how many times they reuse masks.

The NIH study only had volunteers reuse the masks three times. They found UV-treated masks began showing fit and seal problems, while the gas-treated masks held up the best.

The researchers urged anyone decontaminating a mask to check the fit and seal over the face before each reuse.

Nardulli said he read about 30 academic research studies and findings by the NIH and Centers for Disease Control and Prevention before selecting the spectrum and strength of the lights and designing their layout inside the trailer.

“I decided to get every paper I could and read them,” he said. “It turned out to be a massive going-back-to-school undertaking.”

Nardulli ended up mainly relying on protocol the University of Nebraska Medical Center implemented last March and shared online for other hospitals to use.

The medical center appears to be the first to decontaminate N95 masks for reuse, according to a March 20 article in The New York Times. The center chose UV light because during the Ebola outbreak a few years ago, the center used UV lights to sanitize rooms in its biocontainment unit, of the few in the U.S. and the largest.

The medical center determined the masks could be reused 10 times but urged providers to discard them once they don’t fit properly.

BJC hospitals limit reuse of their sanitized masks to no more than 20 times or no longer than three weeks, and Mercy plans to limit their reuse to three times if necessary.

Dr. Matt Broom, chief medical officer for Cardinal Glennon and St. Louis University hospitals, said the donation of the UV light trailer came when they most needed it.

“With the strain on obtaining N95 masks throughout the country,” he said. “now we are able to safely reuse these masks and preserve our supply.”

An anonymous whistleblower tipped off the St. Louis Post-Dispatch that front-line workers are expected to wear their masks for three days.

The first prototype was built with less than $2,000 in parts. It’s two feet tall and shaped like the rounded head of an alligator.

Medical masks hang in a trailer outside Cardinal Glennon and SLU Hospital on Wednesday, April 22, 2020, for sterilization via direct UV light. Local robotic packaging developer PASCO designed and donated the trailer that zaps 180 masks at once. With personal protective equipment scarce in the coronavirus pandemic, making masks available for reuse is critical for hospitals. Photo by Christian Gooden, cgooden@post-dispatch.com