On the day that Mayor Lyda Krewson declared a public health emergency and limited public gatherings to battle the spread of the coronavirus, there were 850 people in the city’s two jails.

It’s the lowest number I have seen.

Ever since various advocacy groups have been pushing to close one of those two jails — the Medium Security Institution known colloquially as the Workhouse — I have regularly checked the daily inmate population to track its drop.

Last Thursday was the first day I have ever seen the total count drop below the 860 capacity of the City Justice Center. Here’s why that matters so much:

A year ago when city Comptroller Darlene Green wrote a letter to Krewson asking to her develop a plan to close the Workhouse, there were more than 1,000 total inmates in the city, including about 230 federal detainees held on contract.

That number was down from 1,400 before Krewson took over. She takes credit — and deserves some of it — for working with various advocacy groups like Action St. Louis and the Bail Project to reduce the jail population. But then, and now, she refuses to finish the job.

At the time, Krewson said the number would have to drop significantly to make having just one jail work. She pushed back on moving federal prisoners.

But now, all of the city’s inmates, including federal detainees, could fit under the roof of the City Justice Center. With just a little bit of work, the number could drop by a couple of dozen more to give the jail the flexibility it needs to close the Workhouse and free up $16 million.

Right about now, the city could use that money — and maybe even the empty Workhouse facility — as it battles the coronavirus. On Friday, many of the same advocates who have been pushing toward the closure of the Workhouse sent Krewson and other city, county and state leaders, including Gov. Mike Parson, a letter outlining their suggestions for how government leaders should protect the most vulnerable citizens during the pandemic, including those in jails, the homeless, and people living in poverty.

“If our region is to effectively combat the spread of this virus, and truly prioritize the health of all its people, we must today adopt an approach that centers the needs of those who are otherwise likely to be most impacted,” wrote 18 organizations, including ArchCity Defenders, Action St. Louis, Forward Through Ferguson, the ACLU, the MacArthur Justice Center and the state public defenders office. “For this reason, local and state policymakers should implement a comprehensive set of policies targeted at the following populations most at risk of contracting this disease, and the institutions and practices that pose the greatest threat. Our shared safety and health depends upon it.” 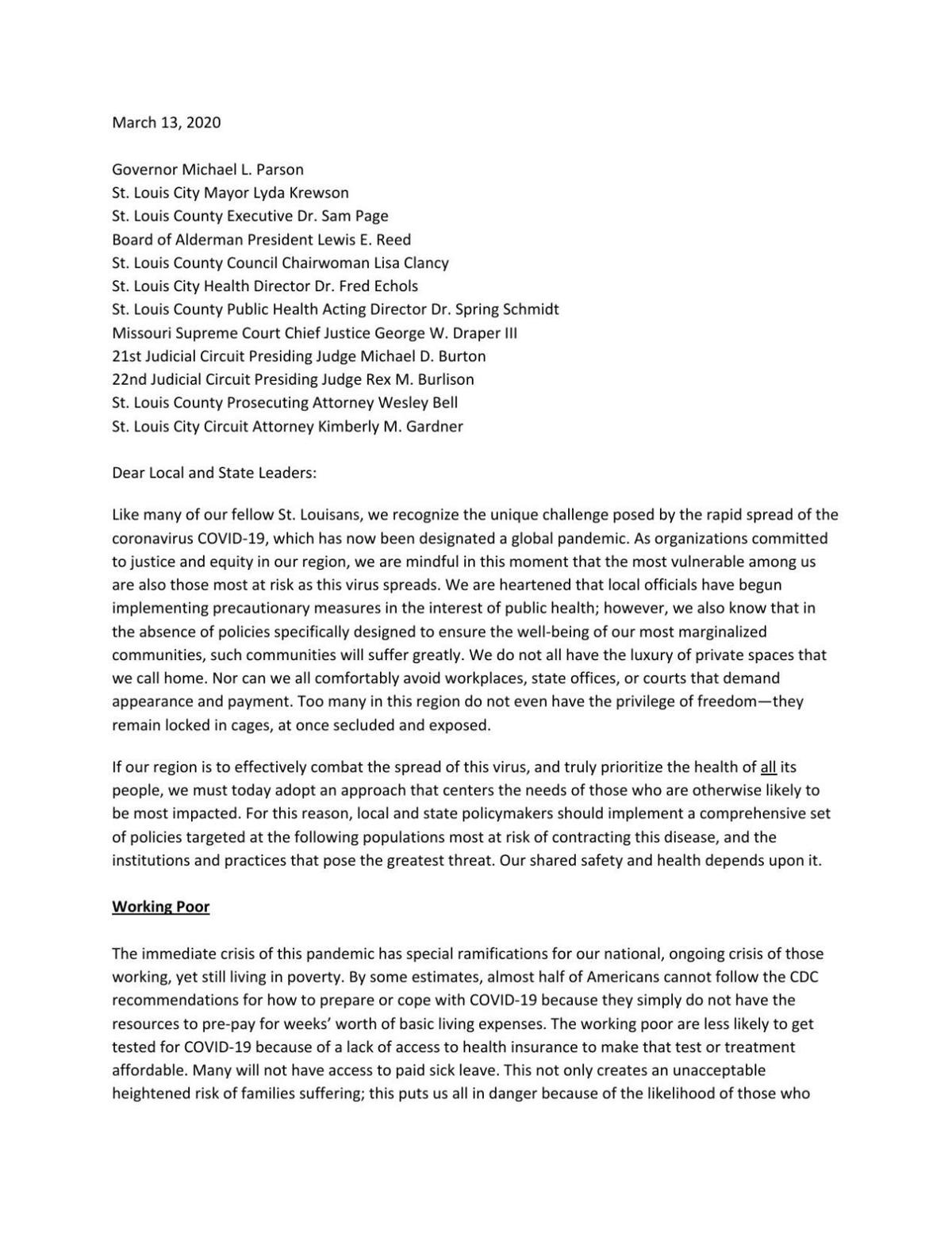 • Release jail detainees being held for nonviolent offenses who are there because they can’t afford bail.

• Allow those still in jail to have free access to email and phones, because their access to families and defense attorneys has been cut off.

• Release from jail those elderly inmates who are particularly vulnerable to the coronavirus. Many of them, like Patty Prewitt, have sought pardons or commutations, but have been ignored by a series of governors.

• Put a moratorium on eviction proceedings.

• Abate fees and fines due to various offenses.

• Provide a center for unhoused people to be able to self-quarantine.

• Increase access to food and other services for people living in shelters.

The letter comes at a time when defense attorneys are already worried about the condition of their clients in jails, where those clients are likely more susceptible to the quick spread of a virus, and where much health care is outsourced to private companies that may not have the best track records.

“I spoke with several clients this week; all said it was business as usual in their various facilities,” said Amy Breihan, the director of the MacArthur Justice Center in St. Louis.

Ironically, the letter doesn’t ask for the Workhouse to be closed.

But with the numbers dipping and the city facing a crisis for which it will need funding and space, why not now?

Messenger: An alcoholic finds comfort in digital family as pandemic shuts down meetings

AA turns to Zoom and other digital tools to conduct daily meetings.

Two things keep Dr. Will Ross up at night.

Mayor's office says downtown tent encampment is different than others that it plans to leave alone during coronavirus pandemic.

Messenger: As coronavirus spreads to America's jails and prisons, the death penalty awaits

As coronavirus cases — and deaths — add up in America's jails and prisons, advocates for justice push for action.

Judge releases man after previously sentencing him to jail without benefit of legal representation.

Messenger: Now in full retreat, Krewson has one good choice. Close the workhouse.

Protesters say mayor tried to intimidate them. She has since apologized.

Messenger: A new name for St. Louis that ties present to the past: Eviction City

President Trump asks Gov. Parson if he plans to change the name of St. Louis. No, the governor said. But what if he did?

Members of the aldermanic public safety committee are pointing to a corrections report to suggest that closing the workhouse might be too hard.

The state's prison population is down nearly 10,000 in three years.

Messenger: Missouri parolees back in court fighting for liberty, despite clear ruling in their favor

State appeals ruling that told it to protect the civil rights of Missourians before sending them back to prison.

Bail system worked as it is intended for man accused of domestic violence, says defense attorney.

Messenger: Close the Workhouse movement to St. Louis aldermen: Choose a side

Resolution to plan for eventual closure of the Workhouse sparks debate in public safety committee.

Mayor sends comptroller a letter seeking emergency help. Perhaps she should have paid more attention to the comptroller's letter from April.

Want a safer St. Louis? Follow the Constitution. Close the Workhouse. Change the culture of policing.

Messenger: Close the workhouse, says city comptroller — it 'is the right thing to do'

Comptroller Darlene Green says the move would save $16 million.

Jail population headed in right direction in St. Louis. So why not finish the job?