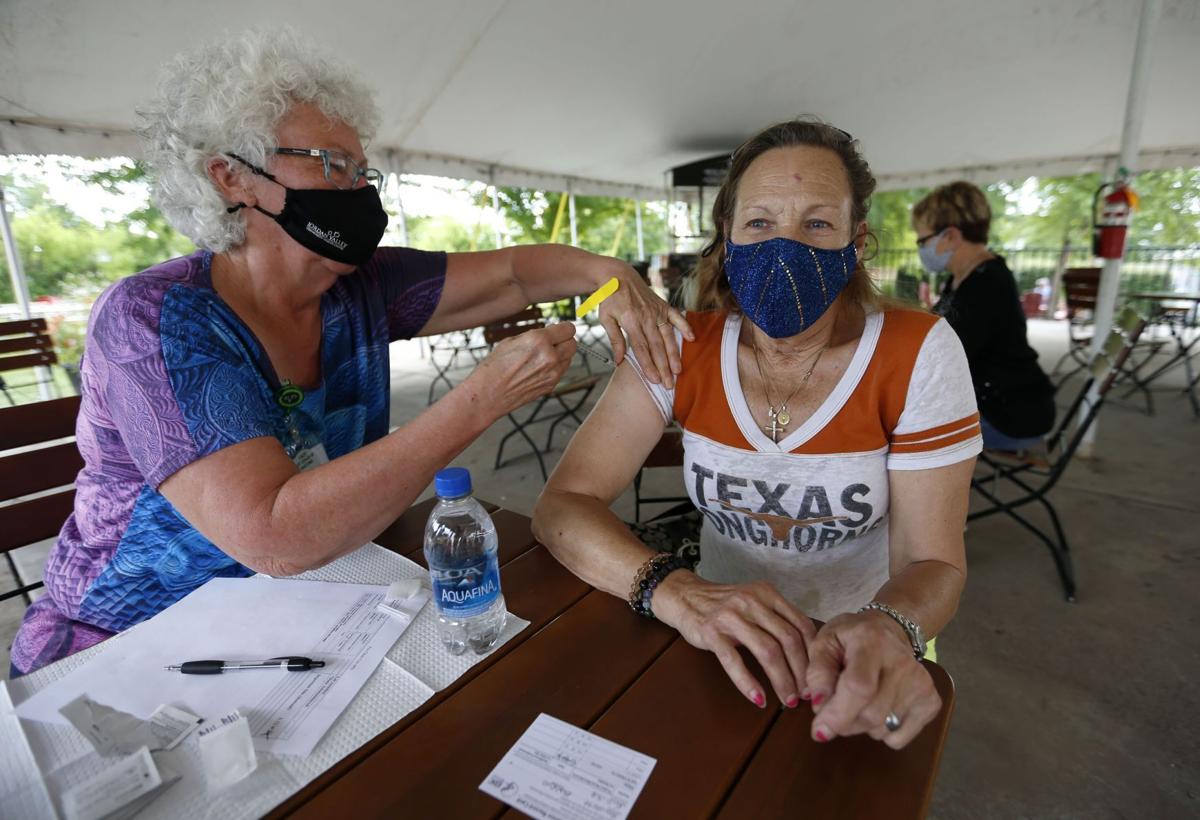 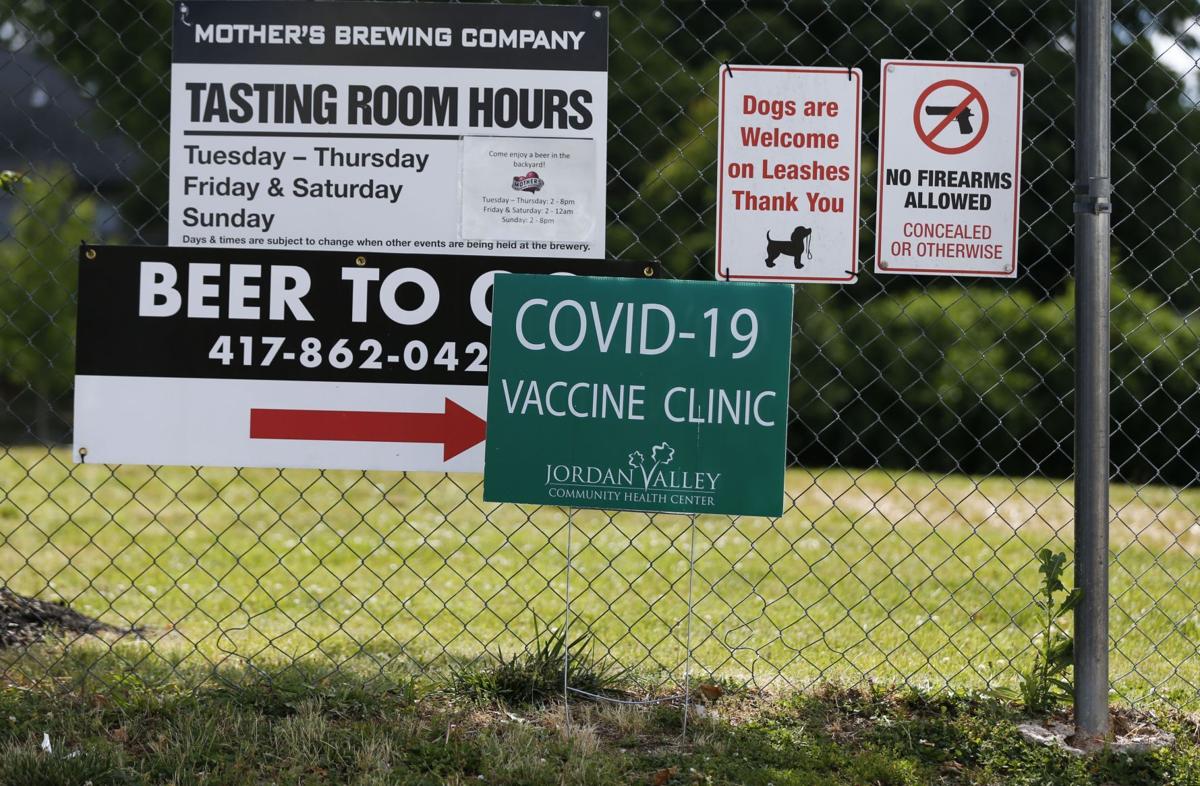 Signs hang on a fence for Mother's Brewing Company's COVID-19 vaccine clinic in partnership with the Springfield-Greene County Health Department and Jordan Valley Community Health Center on Tuesday, June 22, 2021, in Springfield, Mo. As the U.S. emerges from the COVID-19 crisis, Missouri is becoming a cautionary tale for the rest of the country: It is seeing an alarming rise in cases because of a combination of the fast-spreading delta variant and stubborn resistance among many people to getting vaccinated. (Nathan Papes/The Springfield News-Leader via AP)

The Missouri health department on Thursday reported a huge jump in coronavirus cases — 1,232 — a number not seen regularly since early February.

The average daily number of new cases has been on the rise since the start of June, going from about 400 to nearly 700 a day, driven by the presence of the more infectious and dangerous Delta variant and dismal vaccination rates. Thursday’s jump moves the daily average to 759.

Neighboring Illinois, with a higher vaccination rate and twice the population, is averaging 222 cases a day.

Missouri remains in the top spot on The New York Times list of states with the most cases per capita in the past seven days — 11 per 100,000 people, compared with the national average of 3 per 100,000.

Counties across northern and southwest Missouri are the state’s hot spots. Linn County to the north and Laclede County in the southwest are in the Times’ top 10 jurisdictions across the country with the most cases per capita over the last seven days — 50 per 100,000 for Linn and 47 for Laclede.

A report released this week from Deloitte Consulting, a firm hired by the state of Missouri, showed persistently higher cases in Linn and northern Missouri’s Livingston County, plus smaller census tracts in and around the cities of Joplin, Lebanon, Salem, Springfield and Troy. The report looked at case rates by census tract, from May 27 through June 10.

During a meeting Thursday of the state’s Advisory Committee on Equitable COVID-19 Vaccine Distribution, Andrew Miller, of Deloitte, said outbreaks in and around Springfield are “expanding, getting larger,” and upticks are showing up near Troy in the St. Louis region and southeast Missouri’s Bootheel.

‘Reality of this virus’

The Springfield-Greene County Health Department, home to southwest Missouri’s largest hospitals, reported the number of patients with COVID-19 had jumped to 167 on Thursday from 34 on May 25.

An infant was hospitalized with COVID-19 at Mercy Springfield, hospital CEO Erik Frederick said. “My prayers are with this little one,” he wrote on social media. “I hope as a community we can start to see the reality of this virus.”

We have a COVID+ under 1 year of age @MercySGF. My prayers are with this little one. I hope as a community we can start to see the reality of this virus. It does not discriminate. It doesn’t care what you think. Please retweet. Tell your neighbors. Tell everyone. Vaccinate.

Statewide over the same period, hospitalizations of suspected and confirmed COVID-19 patients have climbed to 842 from 662, the state dashboard shows.

Chris Prener, a sociologist with St. Louis University who tracks statewide pandemic data, said on Twitter that he was concerned about Thursday’s jump in cases and the state’s trajectory. But numbers over the next week will be a more accurate depiction of the level of transmission.

“The biggest thing I am watching for is whether this is a return to regularly seeing (greater than) 1,000 new cases per day,” Prener tweeted. “In other words, I’m most interested in how the 7-day average evolves.”

Lisa Cox, spokeswoman for the Missouri Department of Health and Senior Services, said the state is closely monitoring virus activity. “The rise in cases we are seeing in many Missouri communities is an unfortunate reminder that this battle is not over,” she said in an email, “and that vaccinations are the best way to protect ourselves and our communities.”

DHSS on Wednesday issued an advisory for health providers with information on the Delta variant in the state.

Genetic surveillance of some COVID-19 cases by DHSS in collaboration with the University of Missouri detected at least one case of the Delta variant in each of 35 counties “across all regions of the state,” the advisory said.

The highest proportion of the variant was detected in the southwest, with about 67% of all the known Delta cases. In addition, sewage samples from 23 wastewater treatment facilities across the state found the Delta variant at 16 locations.

U.S. Region 7, which includes Missouri, Kansas, Iowa and Nebraska, currently has the highest percentage of the Delta variant in the country, according to national variant surveillance data — almost 35% of virus samples collected over two weeks ending June 5, up from just 1.6% a month prior.

State health officials continue to encourage those ages 12 and up to get vaccinated, and “social distancing and appropriate masking remain very important countermeasures.”

The DHSS advisory informed providers about patient data from the United Kingdom, where the Delta variant now accounts for 91% of COVID-19 cases. The data shows symptoms may differ among those sickened with the variant.

Headache, followed by a runny nose and sore throat, were more common than the typical fever and cough. Loss of smell was even less common.

Most cases were in young people who had not been vaccinated.

The variant has shown to be much more transmissible — with each case infecting about five to eight others rather than one or two — and doubles the risk of hospitalization compared with the more common Alpha variant.

“Implication of such findings is that infected persons may not perceive themselves as having COVID-19 symptoms and not seek health care accordingly, and health providers may not pursue an appropriate testing. The Missouri DHSS urges health care providers and the public to be vigilant for the possibility of Delta virus infection … Vaccination is the most effective and long-lasting tool for protection from this infection.”

Signs hang on a fence for Mother's Brewing Company's COVID-19 vaccine clinic in partnership with the Springfield-Greene County Health Department and Jordan Valley Community Health Center on Tuesday, June 22, 2021, in Springfield, Mo. As the U.S. emerges from the COVID-19 crisis, Missouri is becoming a cautionary tale for the rest of the country: It is seeing an alarming rise in cases because of a combination of the fast-spreading delta variant and stubborn resistance among many people to getting vaccinated. (Nathan Papes/The Springfield News-Leader via AP)