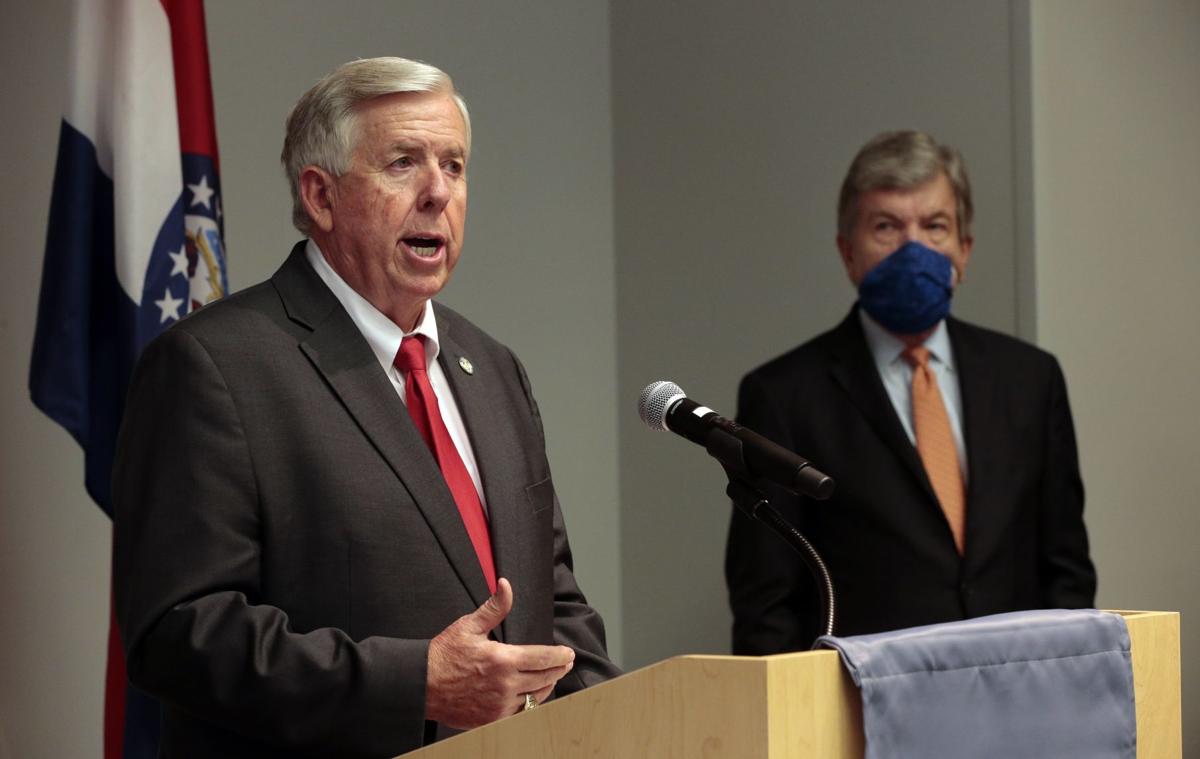 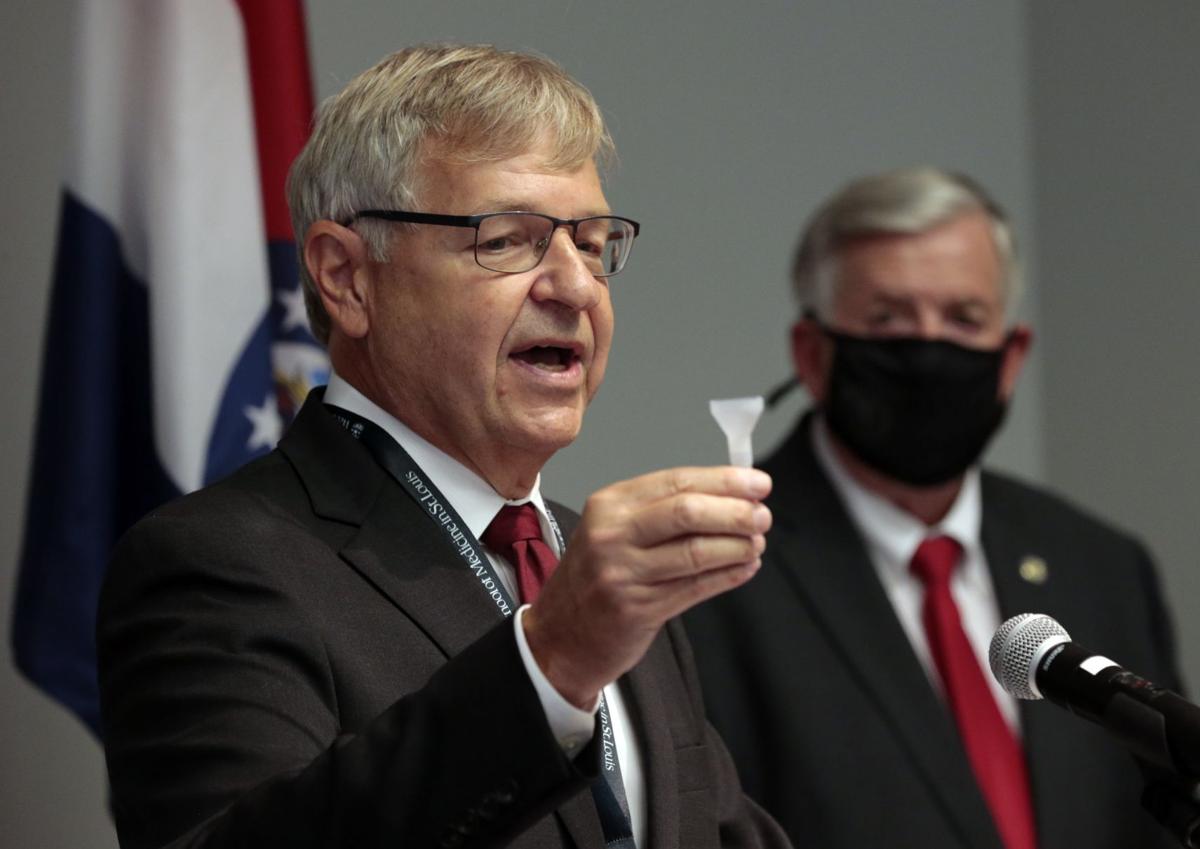 Missouri Gov. Mike Parson, right, listens to Dr. Jeffrey Milbrandt, head of the Department of Genetics and the McDonnell Genome Institute at Washington University School of Medicine, as he speaks about a new FDA approved saliva test for the coronavirus on Thursday, Sept. 3, 2020. Photo by Robert Cohen, rcohen@post-dispatch.com 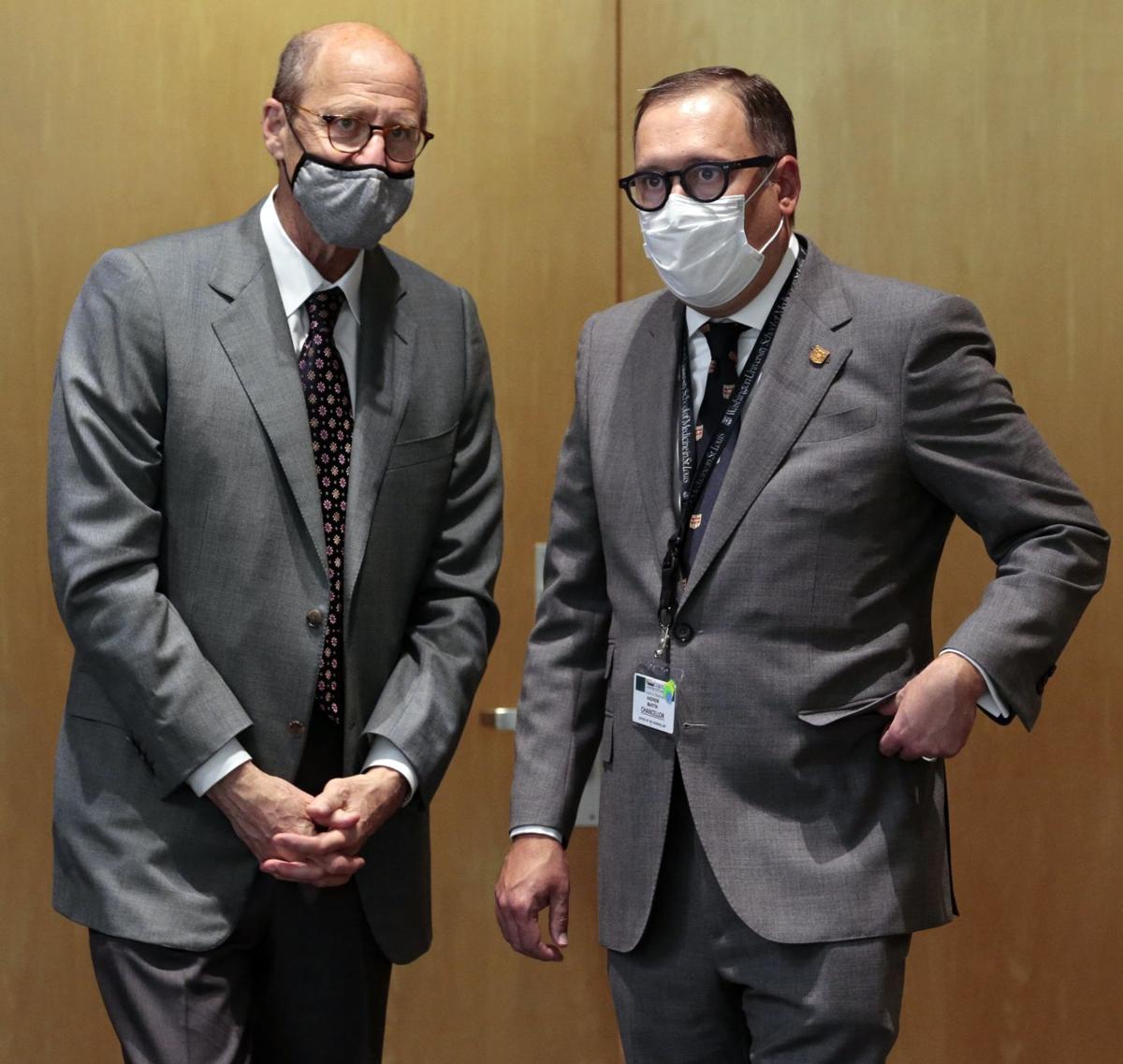 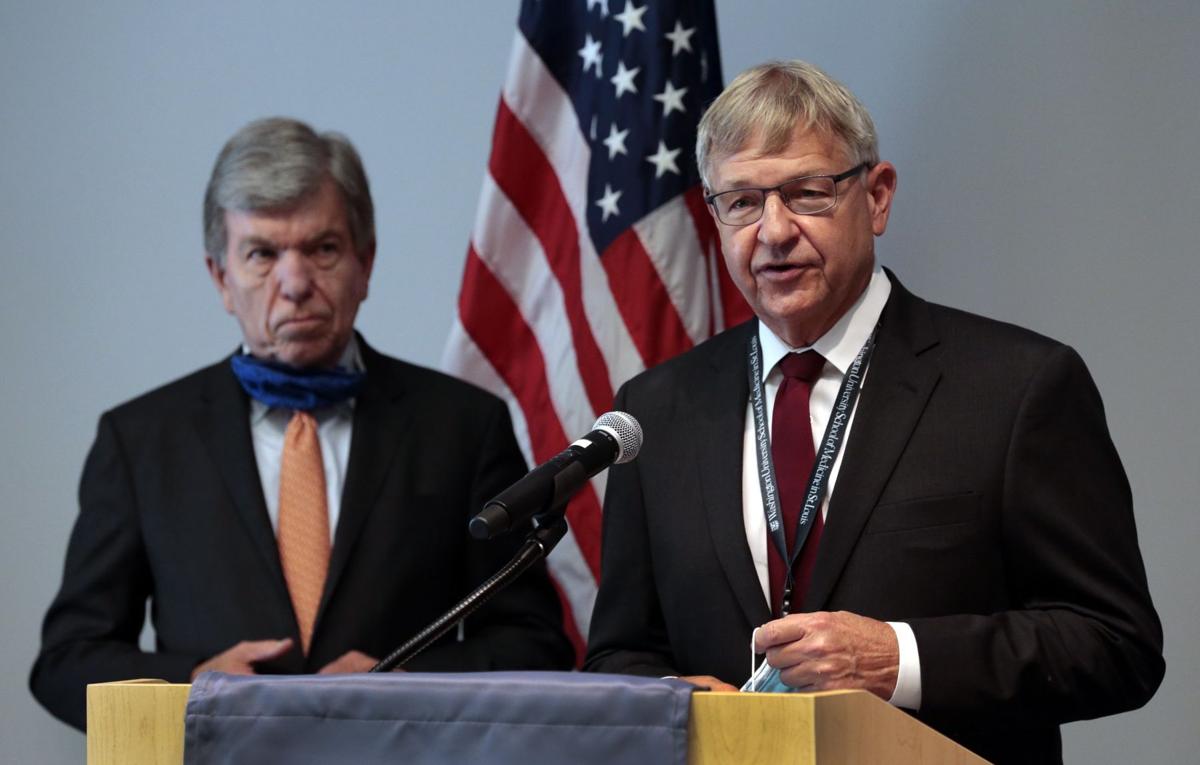 Dr. Jeffrey Milbrandt, head of the Department of Genetics and the McDonnell Genome Institute at Washington University School of Medicine, speaks about a new FDA approved saliva test for the coronavirus on Thursday, Sept. 3, 2020. U.S. Sen. Roy Blunt listens at left. Photo by Robert Cohen, rcohen@post-dispatch.com 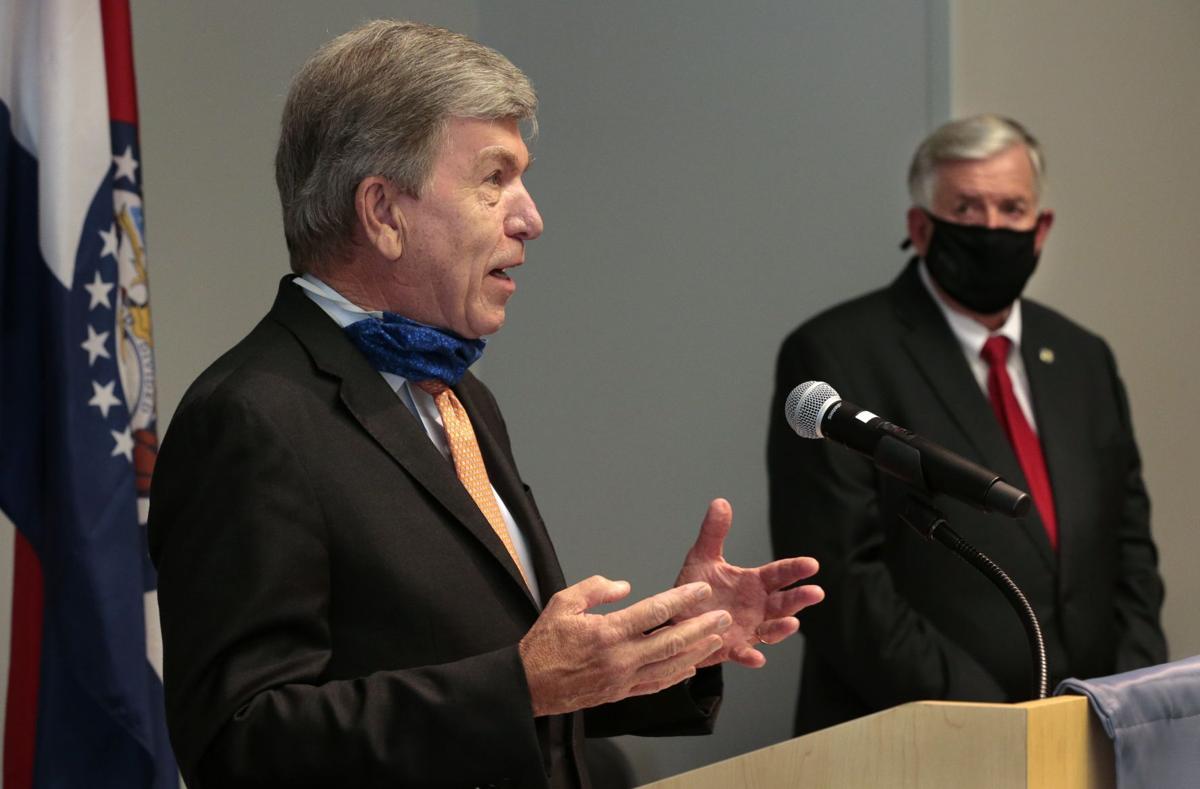 The number of people getting tested in Missouri has decreased dramatically in the past month, and health officials hope access to easier and quicker tests will encourage an increase.

The saliva test, approved last week for emergency use by the FDA, is already being used to test about 10,000 students and staff arriving on Washington U.'s campus this week and next, said Dr. Jeffrey Milbrandt, director of the university’s McDonnell Genome Institute, which led test development with biotechnology company Fluidigm.

The university lab has the capability to process up to 30,000 tests per week, returning test results in less than 24 hours.

It now takes about four days to get test results, largely via nasal swab, in Missouri, officials said. When demand for testing was high in July, wait times were as long as one to two weeks, making it difficult to contain the virus and trace contacts. The delay, among other things, began to discourage residents from getting tests.

In mid- and late July, for the most common type of test, the state regularly reported more than 100,000 results per week. By the week ending on Aug. 30 — the most recent state data available — that figure had dropped to 77,000.

At the same time, the tally of new coronavirus cases in Missouri has hung at around 1,000 per day since mid-June without any significant dip.

“People are just fatigued of being isolated and quarantined and sequestered,” Dr. Randall Williams, director of the Missouri Department of Health and Senior Services, told the Post-Dispatch on Thursday. “It's just very tempting to think that COVID has dissipated. And it hasn't.”

Williams said he suspects some people may not seek testing because they don't want to self-quarantine. Long test turnaround times lead others to believe the results will no longer be useful.

Adults in their 20s make up the largest number of COVID-19 cases out of any age group in Missouri. And because they are more likely to show mild symptoms, or no symptoms, a lack of testing makes it easier for those infections to go undetected and spread to people in high-risk groups, said Dr. Will Ross, nephrologist at Washington University and chairman of the St. Louis Joint Boards of Health and Hospitals.

"We have no effective way of really evaluating the … incidence in this population in a systematic way if we don't have widespread testing," Ross said.

Demand for testing is expected to ramp up again as students return to school, and with new federal testing requirements for federally licensed nursing homes, which require more frequent testing, especially after positive test results.

Todd Richardson, director of Missouri’s Medicaid program, said the state is excited to see Washington U.'s test deployed in the field. “It’s one of the additional tools we think we can throw in the fight there,” he said.

Plans are still underway to order, assemble and distribute the new Washington U. testing materials across the state as well as equip other laboratories to process the results, officials said. The test could be more widely available as early as next month.

At a press conference after Thursday's meeting, Parson praised the university. “They took it upon themselves to say there is nobody out there that can do it any better than we can do it,” Parson said. “And they set their people to work.”

The saliva test is quick, simple, cheap and involves supplies that are easier to acquire than what is needed to process the typical nasal swab test, Milbrandt said. It involves a plastic funnel and tube that can fit in one’s palm, and a small amount of saliva. A person can collect the saliva themselves, which protects health care workers and saves on personal protective equipment. A person simply removes the funnel, caps the tube and places the sample in a bag.

St. Louis companies manufactured the funnels and assembled the kits in bags, Milbrandt said, which include instructions and a unique code for each person.

The Washington U. saliva test is the sixth approved by the FDA. Others include tests created by Yale University and University of Illinois at Urbana-Champaign.

Milbrandt said the university did not make the test for national and international use.

“We were thinking that we needed to serve our community, the greater St. Louis region and Missouri and our university and medical center,” he said. “No one company, no matter how massive, can supply the entire market.”

It is not the only test that could boost Missouri results. Last week, the U.S. Department of Human Services also announced a $760 million deal to purchase 150 million newly approved rapid antigen tests for COVID-19 and distribute them to states within the next couple of weeks. The tests, developed by Abbott, are about the size of a credit card and can provide results within 15 minutes from a nasal swab.

Missouri Department of Health spokeswoman Lisa Cox said it’s not yet known how many rapid antigen tests the state will receive nor where they might be directed. It is only approved for people with symptoms and a medical professional must administer it.

Cases are rising quickly in Missouri's rural areas. The state has now seen 120,298 COVID-19 cases since the beginning of the pandemic.

The Missouri Department of Health and Senior Services reported Sunday that 1,125 patients, in total, were in hospitals with COVID-19.

It wasn't immediately clear how the change would affect high schools in the city, as many already have moved their fall sports to the spring.

The new deaths bring the state toll to 1,947 since the start of the pandemic.

Parking lots, Enterprise Center among sites were vaccinations will be offered.

Missouri's hospitalization numbers have been trending upward for weeks.

In Springfield, Missouri, hospitals are near capacity; in Joplin, cases are climbing.

US colleges struggle to salvage semester amid outbreaks

Many major universities are determined to forge ahead despite warning signs, as evidenced by the expanding slate of college football games occurring Saturday.

Missouri Gov. Mike Parson, right, listens to Dr. Jeffrey Milbrandt, head of the Department of Genetics and the McDonnell Genome Institute at Washington University School of Medicine, as he speaks about a new FDA approved saliva test for the coronavirus on Thursday, Sept. 3, 2020. Photo by Robert Cohen, rcohen@post-dispatch.com

Dr. Jeffrey Milbrandt, head of the Department of Genetics and the McDonnell Genome Institute at Washington University School of Medicine, speaks about a new FDA approved saliva test for the coronavirus on Thursday, Sept. 3, 2020. U.S. Sen. Roy Blunt listens at left. Photo by Robert Cohen, rcohen@post-dispatch.com