Bill Olwig reached under the table and touched the knee of his date, Patricia Abeln.

“Mom always said that’s all it took,” said their daughter, Rose Schroeder. “Right then she knew he was the right one.”

The couple wed in May 1959 and they enjoyed nearly 61 years of marriage while raising seven children in their Catholic faith: six boys — Bill, Joe, Bob, Tom, Mark and Pat — and one girl, Rose.

But the union of William “Bill” Olwig, 85, and Patricia “Pat” Olwig, 83, ended last week when the couple died from COVID-19 complications, less than an hour apart.

Through the years, Bill always called his wife “babe,” so much so that in his work, as a longtime co-owner of sheet metal business C&R Mechanical, he would slip and sometimes ask a co-worker, “Hey, babe, can you handle this?”

“A few of them started calling him ‘hey babe’ as a nickname,” said their son, Pat, who later worked for the company himself.

Bill’s family immigrated to St. Louis from Germany near the start of the 1900s when his father got a position at a Soulard florist shop. He started his own career as a carpenter before working as a union member in the sheet metal industry.

“He was a straight shooter,” Pat said of his father. “He would tell it like it is, but he had a heart of gold.”

Patricia grew up in St. Louis’ Baden neighborhood. When she wasn’t busy raising seven children, she volunteered for a list of noble causes, many of them connected to the couple’s Catholic faith, including stints as a preschool teacher and religion instructor for special education students at St. Joseph’s Catholic Church in Cottleville.

The Olwigs were also a soccer family. The Post-Dispatch wrote a story in 1984, when Tom was playing for the University of Missouri-St. Louis Rivermen against his brothers Mark and Joe on Lindenwood University’s team.

“Sometimes it seems like we see a soccer game every night of the week,” the elder Pat said at the time. “But we enjoy it. The game has kept the family together, and it’s been really good to the boys.”

The Olwigs lived for decades on Ensenada Drive in Florissant, then in Hazelwood until last September when the couple moved to an independent living apartment at a Delmar Gardens long-term care facility in O’Fallon, Missouri.

But a few weeks ago, the couple both started to cough.

“We were worried, but we thought, well, maybe this is just their seasonal cold,” Rose said. Her father called and got antibiotics from his doctor to start, as others in Delmar Gardens were also getting sick.

The facility was already closed to visitors as the coronavirus pandemic spread across the country.

Next the Olwigs’ temperatures spiked, and they started to lose energy. By April 26, Bill’s condition became serious enough that paramedics took him to Progress West Hospital in O’Fallon.

About six hours later, the ambulance was back to pick up Pat.

“One of my brothers followed the ambulance and watched Mom get out,” Rose said. “She just calmly waved and said, ‘Hey, I’m just going to get tested.’”

By the next morning, April 27, both Bill and Pat were in the intensive care unit and put on ventilators to help them breathe. They both tested positive for COVID-19.

“We knew then, it would probably be the end,” Rose said. Both had years of medical problems that made them high-risk for complications from the virus.

The next day, a family friend and Catholic priest, the Rev. Kevin Schroeder, donned layers of protective equipment to perform the religious sacrament Anointing of the Sick for Bill and Pat in their hospital beds.

Their children, 20 grandchildren and eight great-grandchildren watched through a live video feed on Zoom. The priest asked for God’s protection and peace for the couple a last time.

The following Friday, with hospital waiting rooms off-limits, the Olwig family set up chairs and a small tent in the hospital parking lot to wait for news. That morning, under advice of a doctor, the family decided to take both Bill and Pat off life support.

A doctor walked to the parking lot about 12:40 p.m. to tearfully tell the siblings and other relatives that Bill had died. His wife followed about 40 minutes later.

Bill and Pat had intended their final charitable act to be donating their bodies to St. Louis University for research. Because of the risks of spreading the disease that killed them, that was not possible.

”They wanted to do it just as another way to give,” said their son Pat. “My dad had said, ‘Well, maybe someone can learn something.’”

Pat hopes, though, that people do learn from his parents’ death: the toll COVID-19 can have on every family it touches.

”It’s devastating,” he said. “And I know they’re just this one small part of this thing that’s hitting people all over the world.”

The Post-Dispatch is working to tell the stories of lives affected by the coronavirus pandemic. If you know someone who has died of COVID-19 in the region, please tell us about them by emailing eheffernan@post-dispatch.com or submitting their story online at stltoday.com/online/submit-a-news-tip.

The order, which goes into effect at 7 a.m. Friday, applies to everybody over the age of 9, although some exceptions will be allowed.

Kansas City is making masks mandatory inside businesses and other places that are open to the public amid a growing number of confirmed coronavirus cases.

In many cities, the protests actually seemed to lead to a net increase in social distancing, as more people who did not protest decided to stay off the streets.

The Washington County Health Department on Wednesday announced a public health alert due to a possible COVID-19 community exposure.

NOEL, Mo. (AP) — Tyson Foods has announced that 371 employees at its chicken processing plant in the far southwestern corner of Missouri have …

University of Missouri to require masks in classes this fall 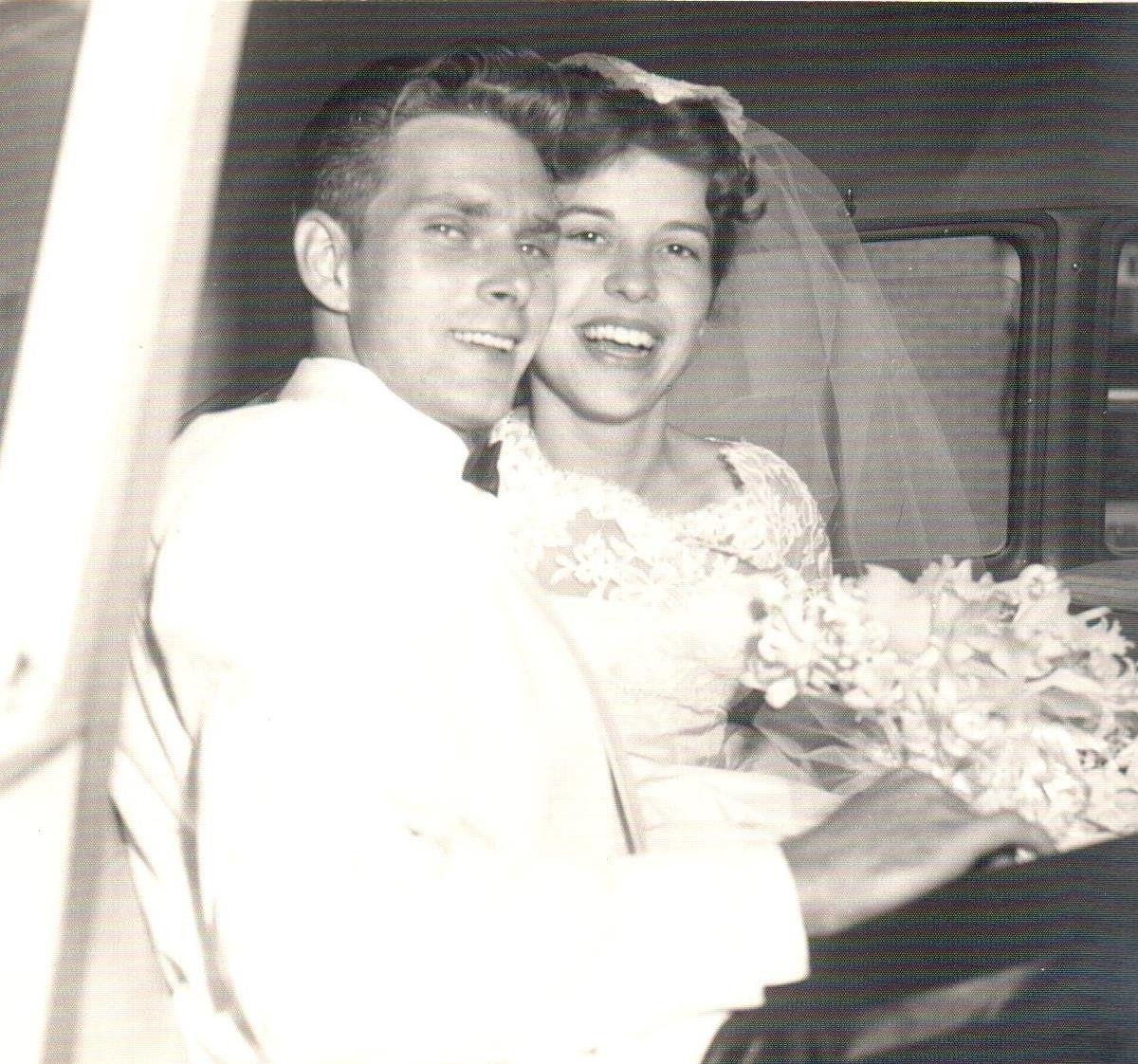 Bill and Pat Olwig photographed on their wedding day on May 23, 1959. Photo courtesy of the Olwig family

Bill and Pat Olwig in a recent family photo. Photo courtesy of the Olwig family 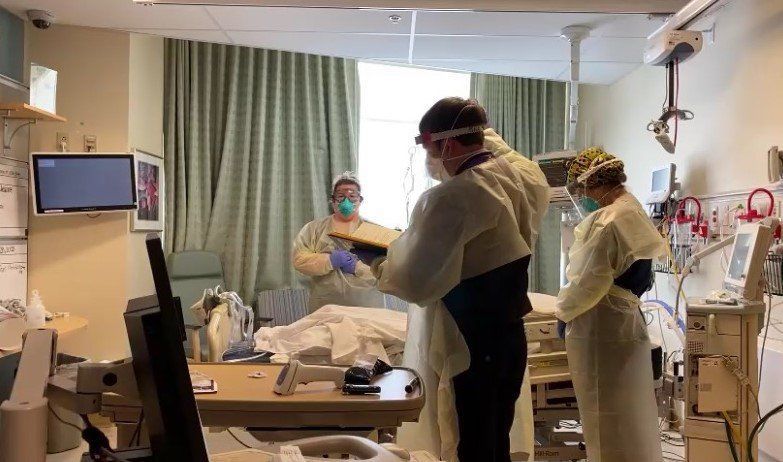 A Catholic priest performs the Anointing of the Sick sacrament for the Olwigs at Progress West Hospital on April 28. Family members were able to watch the ceremony over Zoom video. Photo courtesy of the Olwig family