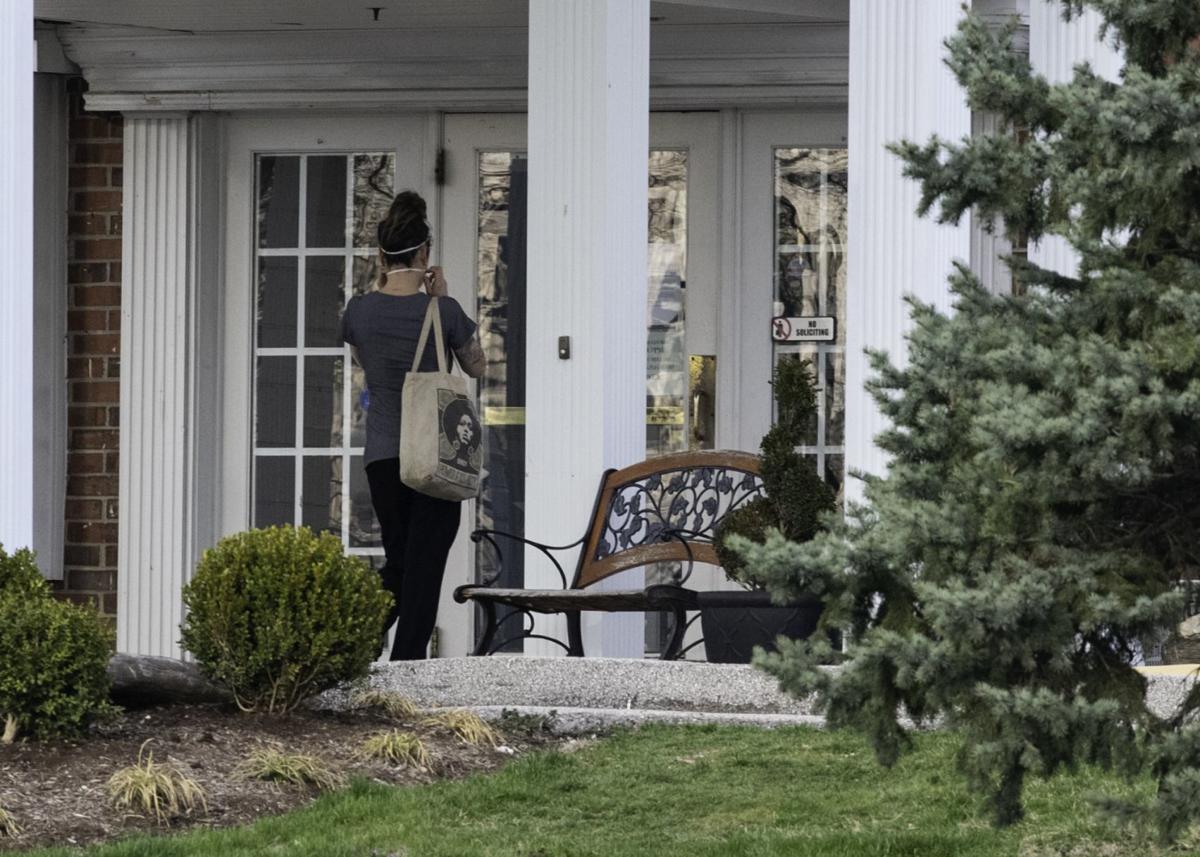 A woman adjusts her face mask before entering Frontier Health and Rehabilitation Center on Wednesday, March 25, 2020, in St. Charles. As of Wednesday afternoon, three patients at the facility had tested positive for coronavirus. Photo by Lexi Browning, lbrowning@post-dispatch.com 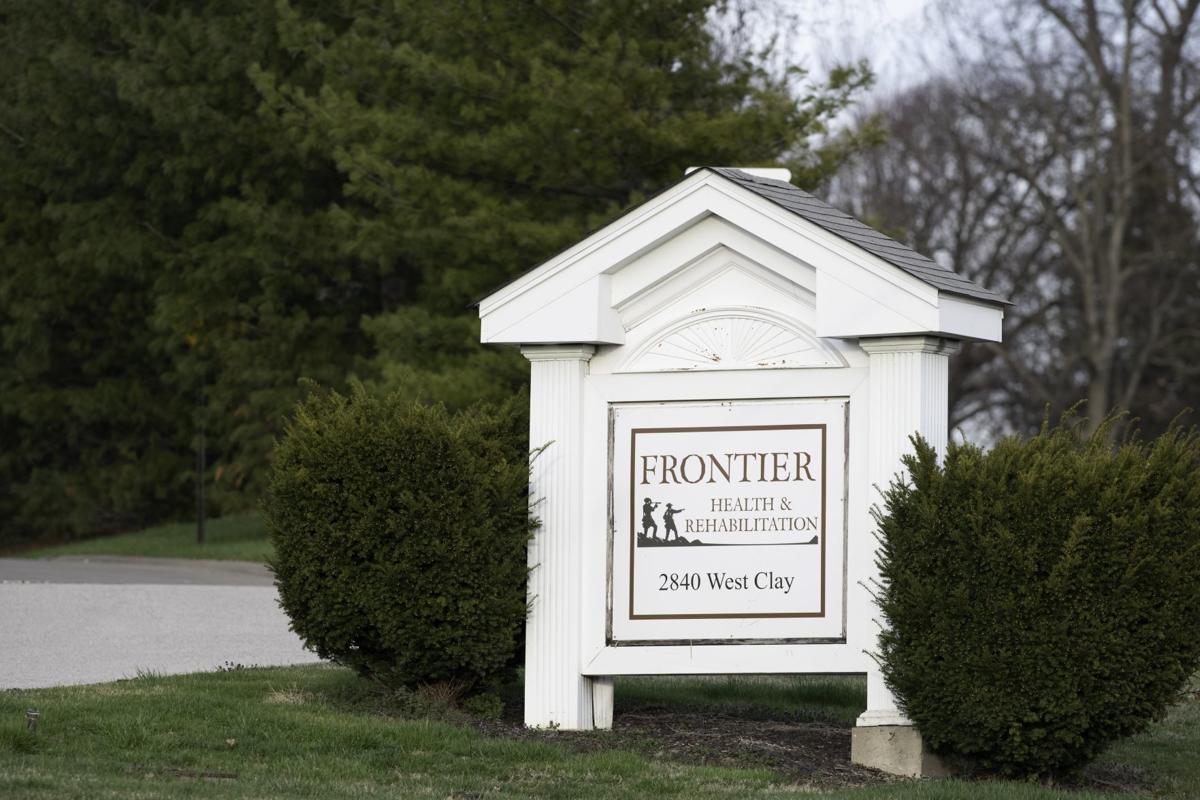 The sign outside of Frontier Health and Rehabilitation Center on Wednesday, March 25, 2020, in St. Charles. As of Wednesday afternoon, three patients at the facility had tested positive for coronavirus. Photo by Lexi Browning, lbrowning@post-dispatch.com 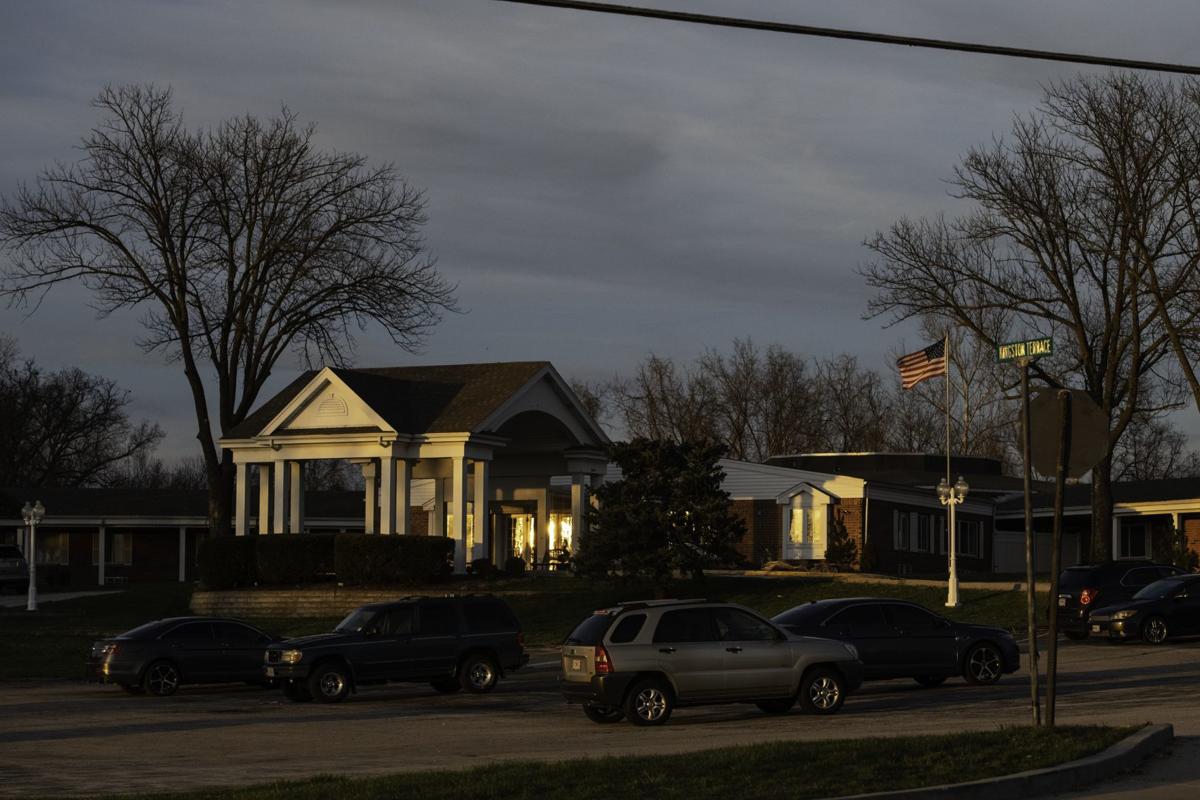 Evening sunlight illuminates the exterior of Frontier Health and Rehabilitation Center on Wednesday, March 25, 2020, in St. Charles. As of Wednesday afternoon, three patients at the facility had tested positive for coronavirus. Photo by Lexi Browning, lbrowning@post-dispatch.com

ST. CHARLES — Two more residents of a nursing home in St. Charles tested positive on Wednesday for COVID-19, the disease caused by the new coronavirus, a day after officials announced the first case there.

Two of the residents of Frontier Health and Rehabilitation Center have been hospitalized, officials said. The third resident has been quarantined in a wing of the facility reserved to isolate any residents with possible exposure to the coronavirus.

The cases at the facility, at 2840 West Clay Street, are the first to be publicly reported at a St. Louis-area assisted living center. Frontier houses 113 mostly elderly patients who are recovering from medical procedures.

Nursing homes and extended care facilities worldwide have been especially hit hard by the spread of COVID-19, which is particularly dangerous to older adults and people with preexisting health conditions.

In the United States, several facilities have seen unusually high death tolls, including at least 37 deaths at the Life Care Center of Kirkland near Seattle. On Monday, federal regulators said staff members who worked while sick at the Kirkland center and other multiple long-term care facilities there contributed to the spread of COVID-19 among vulnerable elderly in the area.

‘Our population that we serve is the most — and I can’t emphasize this enough — the most vulnerable to the exposure of COVID-19.’

The first case at Frontier, reported on Tuesday, involved a woman in her 80s who had been at the facility since Aug. 28 and who was hospitalized Saturday for heart-related symptoms, which are not typically associated with the coronavirus.

On Wednesday, local and state health officials said a woman in her 70s and a man in his 50s both tested positive for COVID-19.

The woman, who was brought to Frontier on March 18, had been hospitalized for shortness of breath, then tested. She remains in the hospital.

The man, who has been at Frontier since Sept. 9, was tested at a hospital after reporting a fever and then returned to Frontier where he is under quarantine. The hospital reported his test results the next day, officials said.

The hospital where the Frontier residents were tested and are being treated was not identified.

None of the three residents had traveled abroad in recent weeks, Frontier spokesman Craig Workman said. They have not received visitors for at least two weeks, he said.

St. Charles County Public Health Director Demetrius Cianci-Chapman said Wednesday the cases at Frontier are evidence the coronavirus has spread in the community, as opposed to being limited to people who recently traveled abroad.

“Community spread is present in our community,” Cianci-Chapman said in a written statement, “and we will, unfortunately, see this virus continue to spread to all areas of our community. We need to protect the most vulnerable, and we can do that by staying home except for essential business and for work.”

“The elderly and vulnerable in our population are counting on us to do everything we can to provide a safe environment.

Frontier, which operates five other facilities in the St. Louis region, banned outside visitors as early as two weeks ago, Workman said. Frontier also then canceled group events within the building and closed the dining room.

Agencies serving older adults in the region have adopted similar practices, which are recommended by the Centers for Medicare and Medicaid Services to minimize the risk of infection in older adults while continuing to deliver vital services, including screening residents and patients daily for signs of or symptoms of the coronavirus.

Frontier began daily screenings at the same time it closed its facilities to the public, Workman said. The St. Charles facility where the woman tested positive for COVID-19 has about 135 staffers.

Any residents who may have been exposed to the three residents with the coronavirus are being isolated in the wing of the building where the male COVID-19 patient is being quarantined, Workman said. Staff serving residents in the wing are required to wear personal protective gear including masks, gloves, a nurses gown and a face shield.

Workman would not provide an exact number of the residents and staff who have been tested for COVID-19.

“Daily screening of all residents and staff continues to take place daily and additional testing is given where warranted,” he said.

A second St. Louis area nursing home hit by coronavirus while the first reports another infection

Four residents and two employees at Life Care Center of St. Louis and three residents and one employee at Frontier Health and Rehabilitation Center in St. Charles test positive.

As of Tuesday, a total 12 residents and two staff members of Frontier Health and Rehabilitation were sick with COVID-19, the disease caused by the coronavirus, up from three residents and one staff member who had tested positive by Friday, spokesman Craig Workman said.

The resident of Friendly Temple Apartments died April 1 at a hospital where she had been since March 19.

In total, 35 residents and seven employees of Frontier Health and Rehabilitation have tested positive for COVID-19.

A woman adjusts her face mask before entering Frontier Health and Rehabilitation Center on Wednesday, March 25, 2020, in St. Charles. As of Wednesday afternoon, three patients at the facility had tested positive for coronavirus. Photo by Lexi Browning, lbrowning@post-dispatch.com

The sign outside of Frontier Health and Rehabilitation Center on Wednesday, March 25, 2020, in St. Charles. As of Wednesday afternoon, three patients at the facility had tested positive for coronavirus. Photo by Lexi Browning, lbrowning@post-dispatch.com

Evening sunlight illuminates the exterior of Frontier Health and Rehabilitation Center on Wednesday, March 25, 2020, in St. Charles. As of Wednesday afternoon, three patients at the facility had tested positive for coronavirus. Photo by Lexi Browning, lbrowning@post-dispatch.com