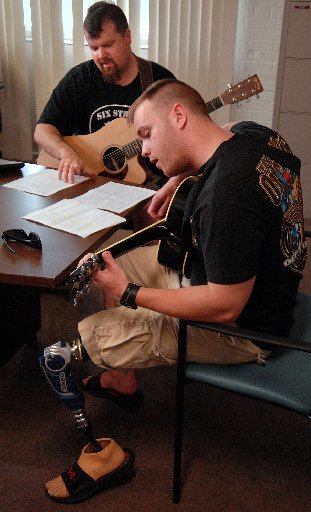 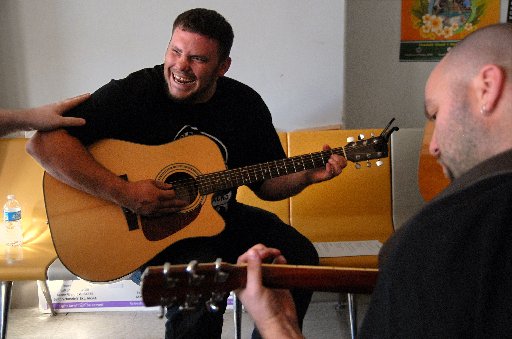 When Army Sgt. Nate Shumaker is playing guitar, he's not thinking about May 4, 2010.

That's the day a mortar round landed in his gun pit in Afghanistan and exploded, taking off his left leg just above the knee.

He and guitar instructor Steve Stoner had just finished strumming along to a digital recording of Waylon Jennings' "Luckenbach, Texas" one evening at the Veterans Administration at Jefferson Barracks.

"That's a hard one to start with," Stoner said. "Get that one mastered, and you won't have a problem with too many songs."

Stoner is one of seven volunteers with Six String Heroes, who teach veterans of the wars in Iraq and Afghanistan to play guitar.

They do it, their mission states, because they "believe music has the power to restore the soul." Many of the vets they've taught would say that's true.

Derek Milles, a co-founder of the group, was in treatment for post-traumatic stress disorder from a year spent serving as an infantryman in Iraq.

After returning from the war, Milles, 29, of Mehlville, a sheet-metal worker, withdrew from family and friends by moving to Franklin County for two years, he said. He was having a hard time dealing with the things he'd seen: buddies killed, decapitated bodies, a six-ton Humvee blown 30 yards.

"Nobody thinks it's going to happen to them, seeing stuff, seeing people killed," he said. "In the first three days, we lost three guys, really good guys. It was like a movie, you can't believe it's real."

Stoner, a guitar player and financial professor for an online university, and Kevin Sullivan, a health care administrator who studied at Berklee College of Music in Boston, were teaching vets guitar at the VA with Guitars for Vets, a national program, when Milles met them. They, along with Mike Petty, a veteran of the war in Afghanistan, spun off and created Six String Heroes in February.

Milles had been playing guitar for years and serves as one of the volunteer instructors. His student is having trouble coping and worries that there's something wrong with him.

"I told him, no, that's normal, dude," Milles said. "We come here, and it feels like a safe haven. And to see (my student) leaving here, smiling and saying, 'Wow, I couldn't do this three weeks ago' . . . With PTSD, your confidence is destroyed. A class like this helps build it back up."

Veterans sign up for eight weekly sessions and earn a guitar if they attend six of them. So far, 18 have taken home guitars. Sullivan and Stoner started teaching guitar at Jefferson Barracks because they wanted to help returning troops.

"I wanted to do something to show my appreciation, and not everyone wants to learn about finance, so this was the only thing I could think of," Stoner said. He was sporting a mohawk haircut that he got as part of a challenge to raise $500 for Six-String Heroes.

Sullivan hopes the group will be able to teach 25 to 50 vets a year, but that depends on funding. They have a waiting list, and their fundraising efforts determine how many vets they can provide for. D'Addario, manufacturer of instrument strings, donated a year's worth of strings, straps and other accessories. The group recently changed its parameters for membership.

"We used to be more focused on beginner guitarists and giving away free guitars," Sullivan said. "But we realized that we wanted something ongoing. That way, they can continue attending, learning the guitar and benefiting from the social aspects of the group."

Six String Heroes is recreational therapy, not music therapy. None of its volunteer instructors is a trained musical therapist.

But what the group does mirrors music therapy, something the Veteran's Administration has been using for a long time to help rehabilitate vets. Between 2005 and 2010, the organization more than doubled the number of music therapists at its clinics nationwide.

Helping war veterans return to an active leisure lifestyle is crucial because many of them have a hard time socializing when they come back, said Jean Ferguson, a recreational therapist at Jefferson Barracks. They often tend to isolate themselves and many use drugs and alcohol to cope with problems.

"You and I would talk about something in St. Louis, like a certain store," she said. "They're talking about things they saw over there. A lot have lost old friends, because their old friends have gone on to different lifestyles. Many enjoy being with other vets so they're very comfortable here. This is their community."

Petty, a co-founder of the group, suffered a closed head traumatic brain injury when a rocket-propelled grenade blew up near a truck he was driving.

Therapy and counseling didn't do much for him, he said. Then he heard about Stoner and Sullivan, who were teaching at the center. The first song Petty learned was Pink Floyd's "Wish You Were Here." Now he's an instructor.

"I started playing and enjoying it, and it got me feeling like me again," said Petty, 33, of Park Hills. "...I wanted to help other guys feel good too."

Meredith Melinder, a neuro-psychologist with the polytrauma team at the VA, said such activities can only help. She and experts who study the brain, point to mounting evidence that learning new skills helps develop parts of the brain that haven't been used.

"That's important when a brain has been injured," she said. "In terms of cognitive functioning, playing guitars requires motor coordination, memory, the ability to concentrate and pay attention, it also involves goal-setting, planning and follow-through."

Sullivan was teaching chords from Carlos Santana's "Evil Ways" to a veteran in a hallway outside the room where Stoner and Shumaker were playing.

Tony Rivertoni sat nearby picking at a string on his guitar.

Rivertoni, 25, of Columbia, Ill., was in Iraq for 15 months starting in 2006 with the Illinois National Guard. His duties included providing security for downed vehicles and supply convoys. The Iraqis fired on his truck on nearly a daily basis. Rivertoni came home physically unscathed. Whether he was suffering from PTSD, no one knows.

He was drinking more than usual in the months after he returned, his father Flavio Rivertoni said. And he was drinking last year when he had a car accident that left him in a coma for six weeks and with a traumatic brain injury.

Sullivan turned his attention to Rivertoni, and instructed him to lay his guitar flat on his lap, strings facing down. The two practiced drumming with their fingers on the wooden backs.

Asked why he takes the guitar lessons, Tony Rivertoni's face lit up in a boyish grin.

"The whole thing kind of orientates around, well, I hate to say it, but I just want to have fun," he said. "And this is really fun."

Organized "talk" therapy is the most effective treatment.

Six String Heroes is volunteer group that teaches veterans how to play the guitar.