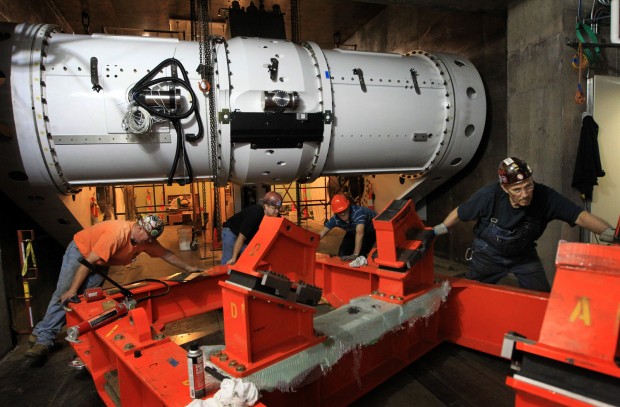 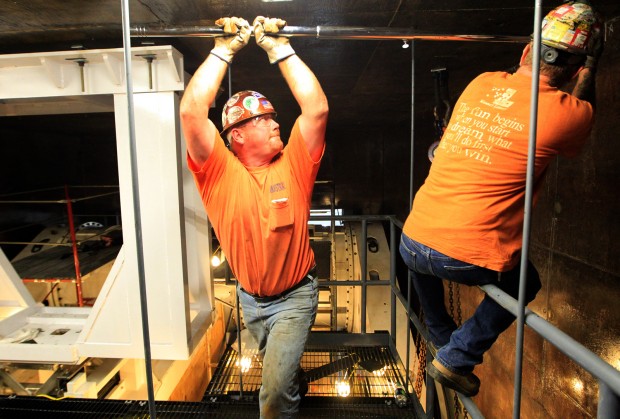 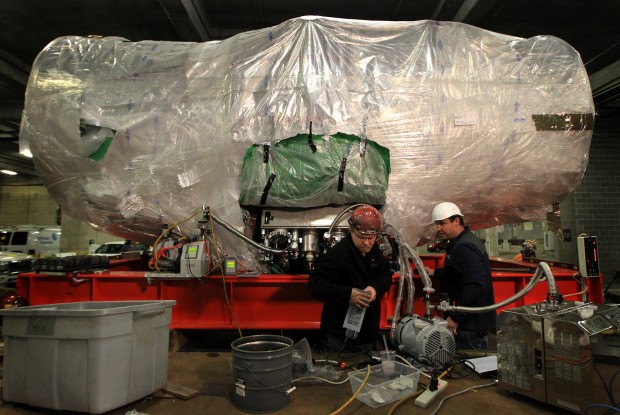 ST. LOUIS • A long-awaited, smaller version of a proton radiation machine for cancer treatments that has become a symbol of the excessive costs of health care arrived last week at Barnes-Jewish Hospital.

The S250 Proton Therapy System from the Massachusetts company Mevion is the first of its kind to be installed in the country. The system is about one-tenth the size and price of the nine existing proton centers around the country that require the space of a football field and can cost up to $225 million.

The promise of protons is the opportunity to zap cancerous cells while sparing as much healthy tissue as possible through more precise beams of radiation when compared with X-rays.

But the larger proton systems have drawn criticism for their cost and lack of strong evidence that patients have better outcomes or fewer side effects compared with traditional radiation. The closest proton centers are in Bloomington, Ind., Chicago and Oklahoma City.

"If you look at the existing facilities, they're having a hard time meeting their payments because they don't have enough patients to treat," Bradley said. "We think we made the right decision in going with a smaller version."

In the larger systems, protons are accelerated to nearly the speed of light in a gigantic machine — called a cyclotron — and then transferred through a series of vacuums, tubes and magnets into adjoining treatment rooms, where the beams deliver a concentrated dose of radiation.

Several companies realized there was a market for a version that would fit into a single room, but it proved challenging to develop the technology on a smaller scale. The Central West End hospital was originally scheduled to receive the system in 2009, but technical problems delayed its arrival. The system is being assembled beneath the parking garage near the Parkway Hotel.

Additional Mevion systems are planned for hospitals in New Jersey, Oklahoma and Florida, according to a company executive.

Before the first patient can be treated, the Mevion system needs approval from the U.S. Food and Drug Administration. Bradley said he hopes the first patients will receive proton therapy next summer.

It is estimated that more than 800,000 Americans undergo some type of radiation therapy each year. Hospitals started offering proton therapy for cancer about 20 years ago, but there have been few comparative studies on its effectiveness.

A 2009 report from the federal Agency for Healthcare Research and Quality found limited evidence that proton radiation produced better results or fewer side effects compared with traditional radiation.

The proton beam accelerator being built at Barnes-Jewish resolves concerns about the technology's cost and size, Bradley said. And the advantages of the treatment for growing children and patients with tumors in delicate areas such as the eyes, brain or base of the skull are clear, he added.

Children who receive radiation treatments for brain tumors are at risk of long-term learning disabilities and stunted growth. Radiation exposure in childhood also has been linked to the development of cancers later in life.

"There's a lot of evidence to support that protons work better than the alternative, or X-rays, in those settings because they can spare those critical structures," Bradley said. "I'm sure that if I had a child that had this kind of cancer, I would take my child to a proton facility."

But those types of tumors are relatively rare, and other hospitals that have invested $100 million to $200 million in large proton centers have ended up marketing heavily to middle-age men with prostate cancer and good insurance. The centers advertise a sort of cancer vacation — radiation in the morning, golf in the afternoon.

Proton therapy is covered by Medicare for $50,000, about twice as much as traditional radiation, but has not been proven more effective at treating prostate cancer.

The focus on prostate cancer treatment, itself controversial because of a growing scientific belief that many tumors never become deadly, has drawn criticism about the unnecessary costs of the large proton centers.

With the smaller proton system, Barnes-Jewish doctors don't expect to treat many prostate cancer patients. Eventually, they plan to treat 20 to 25 patients a day, who doctors say will be easily drawn from St. Louis and surrounding areas. The treatments to shrink tumors require daily, half-hour sessions for up to two months.

Proton therapy could be appropriate for about 10 percent of patients receiving radiation treatments, Bradley said.

"We already treat about 10 children a day in our existing practice," he said. "We expect that volume's going to double, people will send children to us."

Barnes-Jewish Hospital started looking to add proton therapy in the 1990s, when there was talk of opening a large center near Lindbergh Boulevard and Highway 40. But cost was an issue, as well as concern whether St. Louis could support the number of patients needed to fill four or five treatment rooms.

With the smaller machinery and total investment of $20 million, the hospital did not need to rely on outside funding, unlike most universities with proton centers.

As chairman of the Barnes-Jewish Hospital Foundation, S. Lee Kling pushed hard to bring proton therapy to St. Louis. Kling had proton treatment for an eye tumor in Boston and believed the therapy should be more easily accessible. Kling died of lung cancer in 2008.

Many U.S. hospitals will be watching Barnes-Jewish to see whether it finds success with the scaled-down system, said Leonard Arzt, executive director of the National Association for Proton Therapy.

"The smaller machines could conceivably transform (radiation oncology) if they become commercially viable," said Arzt. "They need to install it and prove that it works."

Top tips to keep you cool this summer

Top tips to keep you cool this summer

Down syndrome is focus of new blood test for pregnant women

New, more accurate screening that can detect Down syndrome in a fetus has raised concerns about the ethical implications of making that information safer and easier to obtain.

A historian wrote a book about the hospital and its contributions to the community.

How I did it • Doctor told him the cancer would have spread if he had waited a few more weeks.

A new hospital in St. Charles and a virtual care center in Chesterfield are key parts of Mercy's eight-year investment plan.

The recommendation only covers use of the device for people who are too frail for major surgery. Open-heart surgery remains the remedy of choice for a failing heart valve.