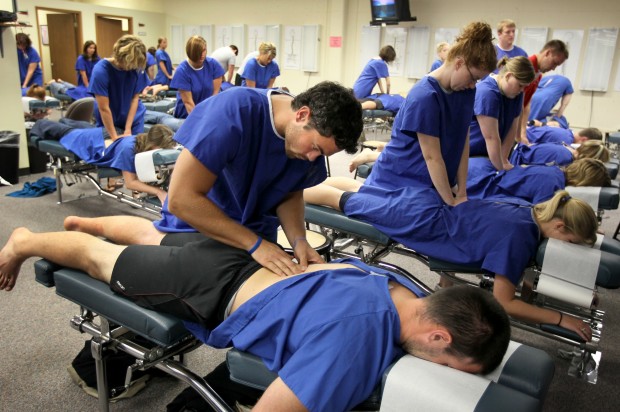 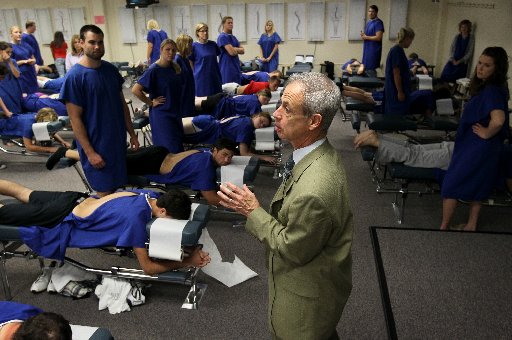 Dr. Ralph Filson (center) teaches a class on adjustment and manipulation at Logan College of Chiropractic. Filson is the team chiropractor for the Cardinals. (David Carson/P-D)
BY CYNTHIA BILLHARTZ GREGORIAN • > 314-340-8114

Carol Ziel's bad knees had changed her gait and that new gait made her whole body hurt.

Her knees felt great after two surgeries to repair them. But everything else kept right on hurting. So Ziel, 62, of St. Louis, made an appointment to see a chiropractor.

"She did an assessment and found that my hips were kind of twisted, and she unlocked my ankles and worked on my neck," Ziel said. "She got my skeletal system back in line, so I'm virtually pain-free now."

"A lot of medical doctors still aren't accepting of them," she said.

Her assessment is right. Sort of.

Nearly 120 years after D.D. Palmer founded chiropractic and 75 years after Logan College of Chiropractic in Chesterfield opened, public perceptions of this alternative health discipline have changed dramatically, among patients and health care providers.

Experts point to several reasons why chiropractic has gained legitimacy: Its educational requirements are more rigorous and require traditional medical training; it has dumped snake-oil treatments for proven modalities; and the American Medical Association no longer discredits it.

"We still run across it. I'm not going to say it's totally dead," said Jennifer McCleary, who owns Triad Sports & Family Chiropractic in St. Louis and Creve Coeur.

McCleary said she graduated from Logan College in 2005 with an optimistic view about her career choice, because she'd trained under such a highly integrative approach.

"Because I'm a younger grad, I kind of get taken aback when people have a negative reaction, or are scared, or their primary doctor isn't receptive to working with me. It's kind of hurtful," she said.

The chiropractic discipline has had its black spots. Chiropractors once believed that a vertebral subluxation or out-of-whack spinal joint could interfere with the body's function and cause all sorts of systemic diseases.

"I think if you go back to D.D. Palmer, he felt that by adjusting the spine you could treat in-grown toenails and warts on the nose," said Gerald Yurth, a 1960 Logan College alum.

It could have been easily cured, Scodary maintains, but the chiropractor thought he could take care of it himself. He ended up dying a tortuously painful death.

"That mentality has changed," he said. "I think chiropractors now understand pathology and microbiology much better. They recognize that if you have a strep infection of the throat, it needs antibiotics."

McCleary thinks there's a clear line of demarcation when it comes to those who are leery of chiropractors. They're almost always over age 60, she said.

Yurth, who has a thriving practice in St. Joseph, Mo., said that lingering resistance stems for a long-term campaign that the American Medical Association waged against chiropractic.

"They were doing a lot of propaganda," he said. "We were in the classification of quacks, and it was demeaning. I don't know if they felt like we were intruding. I think it was territorial."

That started to change in the 1980s when several chiropractors, led by Chester A. Wilk, won a series of antitrust lawsuits against the AMA and other prominent medical groups.

The law proceedings showed that the medical groups had undermined chiropractic schools, undercut insurance programs for chiropractic patients and concealed evidence of the effectiveness of chiropractic care.

Until then, Yurth said, traditional doctors had no choice but to say that there were only two ways to treat musculoskeletal problems — by having surgery or prescribing drugs.

"Those treatments weren't unnecessary, but they did them before other things were tried," he said. "Jumping into surgery is very serious business, but they didn't consider chiropractic as an alternative."

Today, he said, neurosurgeons are becoming much more conscious that when they fuse the spine, the area above and below it often becomes more stressed.

"If we can get the body in a position where it's stabilized (with chiropractic), it can maintain itself without surgery," he said.

Today more than 60,000 chiropractors practice in the United States, according to the American Chiropractic Association. Typically, patients get chiropractic treatment for back and neck pain, headaches, sports injuries, motor vehicle accident injuries, repetitive strains and arthritis.

In recent years, more medical doctors are referring patients to chiropractors or working with them to treat patients.

They've become a viable and natural alternative to treatments that include surgery and drugs.

"When physicians are struggling with chronic conditions, such as fibromyalgia, low-back pain, headaches, and traditional medicine isn't helping, they'll refer the patient to us," said Michelle Smith, director of the St. John's Mercy program.

Logan College and Southeast Missouri Hospital in Cape Girardeau have created a program that brings together chiropractors and traditional doctors such as neurosurgeons and osteopaths, to talk about how they treat patients.

"So they all learn, from integrative standpoint, how the different treatments compare to one another," said George Goodman, president of Logan College. "And it also gives greater confidence to both the chiropractors and the doctors that when they refer a patient, they're going to be treated properly."

Scodary refers patients who aren't good surgical candidates to chiropractors after they've exhausted all other options, including pain management and physical therapy.

"Why not?" he said. "A lot of them are surprised and a lot come back and say it helped."

There's legislation before Congress to require all major Department of Veterans Affairs medical centers to provide chiropractic care and there's already a chiropractic department at the National Naval Medical Center in Bethesda, Md.

Three years ago, leaders at Logan College were confident enough in their profession that they spent $27 million renovating and expanding their school.

"They didn't build that school because what they're doing is hocus-pocus," he said. "It's a very nice facility and it evolved because people believe in them."

Restrictions adopted by state lawmakers since Roe v. Wade and upheld by the courts had already largely eliminated the procedure in Missouri.

So far, 40 volunteer pilots from across the country have been vetted and are ready to help, says the executive director of Elevated Access.

Long-awaited relief for St. Louis families as vaccines roll out for young kids

Finally, families waiting to get their youngest vaccinated, who have watched the community around them return to "normal," can themselves consider it.

A Japanese man accused of defrauding the government of $7.3 million intended for small Japanese businesses hurt by the coronavirus pandemic has been arrested on board a flight after being deported from Indonesia. Police confirmed the arrest of Mitsuhiro Taniguchi. He was taken to a police station after landing at Tokyo’s Narita airport on Wednesday. Japanese media reported Taniguchi and a group of acquaintances allegedly submitted about 1,700 false applications for COVID-19 relief funds to the Japanese government and illegally received subsidies on more than 960 of those applications, taking with them about 1 billion yen. Police also arrested Taniguchi’s ex-wife and their two sons in May on fraud allegations.

“Time is of the essence. We really need him to step up and lead in this moment,” said Dr. Colleen McNicholas with Planned Parenthood in the St. Louis region.

This COVID wave is worse than we know. But the peak may be here.

St. Louis-area health experts say the lack of reporting of at-home tests has obscured the latest wave of cases.

In Missouri had nearly 70 anti-abortion centers and just one abortion clinic before Friday.

The next COVID booster shots will likely be updated for omicron

Moderna, Pfizer and Novavax have been testing vaccines based on the first BA.1 omicron variant that became dominant last winter, driving a massive surge in infections.

Dr. Roach: Post hip surgery, one leg is shorter than the other

Dear Dr. Roach • Four years ago, my wife had hip surgery caused by a fall. About eight months after the surgery, she noticed her left leg was …

Dr. Ralph Filson (center) teaches a class on adjustment and manipulation at Logan College of Chiropractic. Filson is the team chiropractor for the Cardinals. (David Carson/P-D)
© Copyright 2022 St. Louis Post-Dispatch, 901 N. 10th St. St. Louis, MO 63101 | Terms of Use | Privacy Policy | Do Not Sell My Info | Cookie Preferences
Powered by BLOX Content Management System from TownNews.com.
You don't have any notifications.