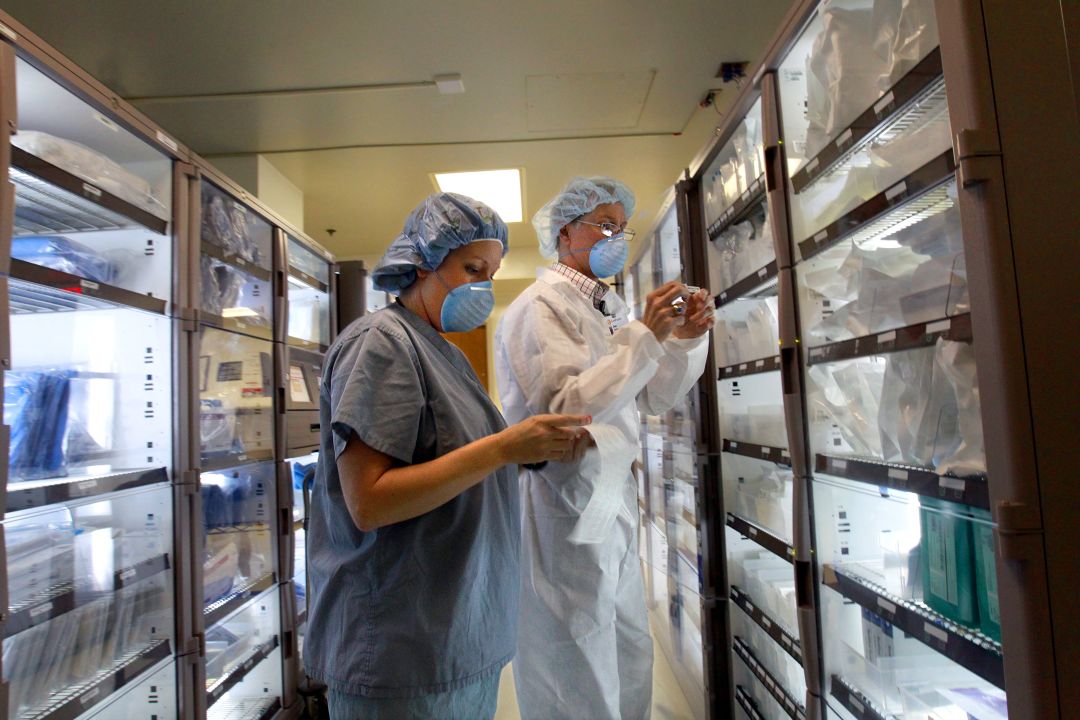 Chasey Jackson (left), an inventory manager in the surgery department of the John Cochran VA Medical Center in St. Louis, and Joe Clohessy, a representative of Carefusion supply management, label the contents of disposable surgical equipment outside the operating rooms on Feb. 16, 2011. Photo by Christian Gooden, cgooden@post-dispatch.com 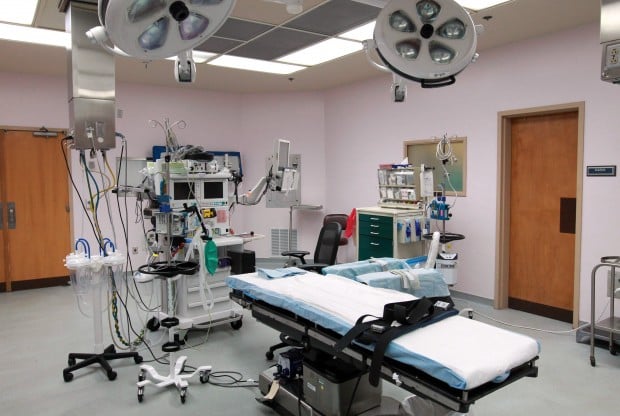 An operating room in the John Cochran VA Medical Center in St. Louis was made available by hospital officials on Feb. 16, 2011, to show that their sterilization procedures and facilities are up to par. Photo by Christian Gooden, cgooden@post-dispatch.com

ST. LOUIS • John Cochran VA Medical Center in St. Louis still needs to improve its sterilization procedures two years after problems in the dental clinic were first identified, according to a new report from the Veterans Affairs Office of Inspector General.

In 2010, the hospital notified more than 1,800 veterans that they may have been exposed to HIV, hepatitis or other viruses in the facility's dental clinic after an inspection turned up visibly dirty instruments even after the tools had been sterilized.

Four of the veterans later tested positive for hepatitis, although it remains unknown whether their exposure was linked to the dental clinic.

Congressional hearings were held in July 2010 to address the problems at Cochran.

In a federal report from March 2011, inspectors found continuing issues and no documentation that tools had been cleaned with the right amount of detergent. Dental clinic staff told inspectors they had not been trained to clean reusable equipment.

The 2011 report included three recommendations to Cochran staff to improve sterilization procedures and training. Two out of three of the recommendations were not completed, and another has been added, according to a follow-up report released Thursday.

The original recommendations that the hospital keep its equipment clean and staff trained will stay open for further review.

The third recommendation, that the hospital take appropriate disciplinary action, was met, although details were not disclosed.

No veteran has been harmed by care received at Cochran, according to a statement from spokeswoman Marcena Gunter. The St. Louis VA recently hired a head of sterile processing who will be in charge of the recruitment and training of employees, Gunter said.

The new report was based on an inspection in January, when investigators found that surgical implants had not been sterilized for the mandated 48 hours. Medical supply rooms were not always kept at the correct humidity levels. Test results for potential contamination on sterilizing machines had not been recorded on multiple days. And inspectors' shoe booties were dirty after walking through the supply rooms, among other problems.

Cochran ranks last out of 126 VA medical centers for inpatient satisfaction, according to a 2011 survey.

The hospital's sterilization problems were not limited to the dental clinic. In February 2011, the hospital shut down its operating rooms after rust stains were discovered on surgical equipment.

The operating rooms reopened after a month of testing, cleaning and replacing of faulty equipment.

Cochran's $7 million remodeled sterile processing lab is expected to open next month, according to a spokeswoman. Plans and funding for the project were in the works before the operating rooms were closed, according to the VA.

The new facility will ensure that veterans "receive medical care which is safe and of the highest quality," Gunter said in her statement.

In the last two years, it's been cited for violating sterilization rules in its dental clinic and operating rooms.

Editorial: VA Hospital here appears to be learning from 2010 tragedies

In light of past troubles at the John Cochran VA Medical Center, it would be unwise to downplay a recent report into the death of a patient th…

VA officials blasted by both parties at House hearing

House members accused the VA of carelessness, lack of accountability.

Surgeries are on again at Cochran VA hospital

Cochran VA vouches for its safety

Surgeries are suspended at Cochran center

A regular inspection of the equipment found "spots on the trays and water stains on at least one surgical instrument," according to a statement from RimaAnn Nelson, director of the medical center.

Chasey Jackson (left), an inventory manager in the surgery department of the John Cochran VA Medical Center in St. Louis, and Joe Clohessy, a representative of Carefusion supply management, label the contents of disposable surgical equipment outside the operating rooms on Feb. 16, 2011. Photo by Christian Gooden, cgooden@post-dispatch.com

An operating room in the John Cochran VA Medical Center in St. Louis was made available by hospital officials on Feb. 16, 2011, to show that their sterilization procedures and facilities are up to par. Photo by Christian Gooden, cgooden@post-dispatch.com