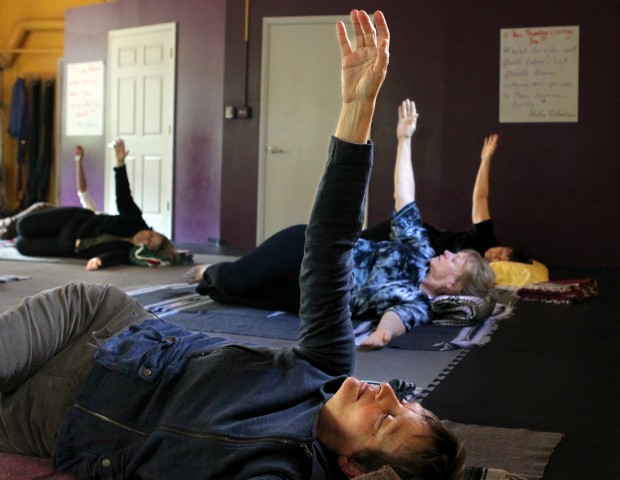 Susan Kissinger (foreground) of Richmond Heights, Linda Davis (center) of Ste. Genevieve and Ruth Brooks (background on right) of Fenton move in response to Feldenkrais Method instructor Kelly Feder (not pictured) in a class that teaches prevention of pain through awareness of one's movement habits at Feder's Webster Groves studio on Friday, Sept. 28, 2012. St. Anthony's Medical Center will offer classes in the Feldenkrais Method, given by Feder. Photo by Christian Gooden, cgooden@post-dispatch.com 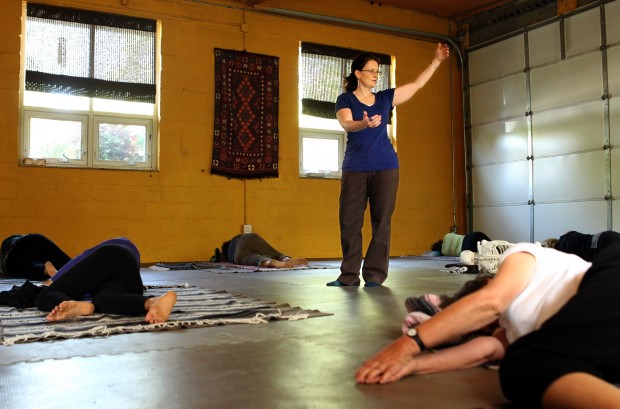 We don't think much about how we sit, stand, walk, lift or reach throughout our day, but Feldenkrais Method practitioners believe people can prevent and ease pain by becoming more aware of how they move.

Classes are growing in the Feldenkrais Method in the St. Louis area, including a free one on Sunday and a weekend workshop at the end of the month.

"I think we're ready to let St. Louis know we're here and ready to grow," said Joanie French, 55, who for several years was the only teacher in the St. Louis area. Now there are three, with a fourth nearing the end of her training. "It will be a nice Feldenkrais community we will have here," she said.

The method is named for its originator, Moshe Feldenkrais, a Russian-born physicist, judo expert and mechanical engineer. He began to develop the method while learning to walk after suffering crippling knee injuries in the late 1940s. He integrated his studies in mechanics, physics and the nervous system.

In classes, students are led through a sequence of easy movements designed to help gain understanding of their senses and movement. The relationship involving joints, muscles and environment is explored.

Students learn their movement habits and develop alternatives to improve flexibility and efficiency. They become more aware of tension, muscle imbalance and repetitive patterns than can cause wear and tear.

All Feldenkrais practitioners must complete 740 to 800 hours of training over three to four years. The U.S. has more than 1,300 practitioners, according to the Feldenkrais Guild of North America.

While many seek out the method because of chronic pain, it can benefit everyone from high-performance athletes to those with neurological conditions such as multiple sclerosis and cerebral palsy, said Kelly Feder. She has been a certified practitioner since 2006 and moved to the St. Louis area earlier this year.

"Runners improve their marathon times because they are using their body in a more efficient way. ... In yoga, your asanas will be better," she said. "It has a wide range of applications."

Feder explained that while people can intentionally stand up straight, good posture can disappear when they are no longer thinking about it. The goal of Feldenkrais is for healthy movement to be automatic, she said. "We are actually changing neural pathways in the brain through this work."

Little research has been done on the method and its health outcomes. Feder, who grew up in Eureka, wanted to become a practitioner after the method helped her recover from numerous knee surgeries for injuries she suffered as a soccer player. "I limped for 15 years, and after three months of Feldenkrais classes and individual lessons, I lost the limp," she said.

Athletic injuries led the other local practitioners to the method, as well. French played for the Women's Professional Basketball League, the first professional U.S. league which lasted from 1978 to 1981. She also played for the U.S. national volleyball team. After a knee and back injury, she spent 10 years trying therapies and exercises to ease pain that kept her awake at night.

A doctor recommended she try Feldenkrais from the only practitioner in St. Louis at the time. After five weeks, French said she saw a big improvement. "She very gently helped me understand one muscle group at a time and get control of that one, and then go on to the next one." The practitioner moved from St. Louis, prompting French to fill the void. French earned her certification in 2001.

Chad Estes, 40, of Olivette, became certified in 2008 after the method helped him recover from a back injury he suffered as a linebacker for Miami University in Ohio. Many of his clients are children with Autism Spectrum Disorders or other neurological diseases.

Johannes Wich-Schwarz, 46, of Maplewood, has cerebral palsy. His pain from walking became so severe that he sought out French a year and a half ago. The English and humanities teacher at Maryville University said that while his habits are difficult to break, "after every session with her, there's a clear sense of getting better."

Donna Schott, 56, of Crestwood, was diagnosed two years ago with degenerative disc disease and was scheduled to have spinal fusion surgery. After two sessions with Feder, she canceled her surgery. After four months of classes, she says she's mostly pain free and back to light gardening and yoga. "I realize something new every time," Schott says of her weekly group class.

For years, French never advertised her classes because she felt she couldn't keep up with demand on her own. Now, she's teamed with up Feder to create a website, send newsletters about classes and hold workshops.

Someday, French said, they hope to open a Feldenkrais center for classes.

Susan Kissinger (foreground) of Richmond Heights, Linda Davis (center) of Ste. Genevieve and Ruth Brooks (background on right) of Fenton move in response to Feldenkrais Method instructor Kelly Feder (not pictured) in a class that teaches prevention of pain through awareness of one's movement habits at Feder's Webster Groves studio on Friday, Sept. 28, 2012. St. Anthony's Medical Center will offer classes in the Feldenkrais Method, given by Feder. Photo by Christian Gooden, cgooden@post-dispatch.com