Teen curtails his craving for milk, gets in top shape
0 comments
Share this
Subscribe for $1 a month
1 of 2 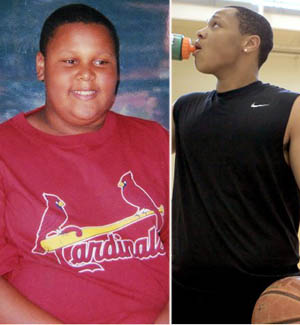 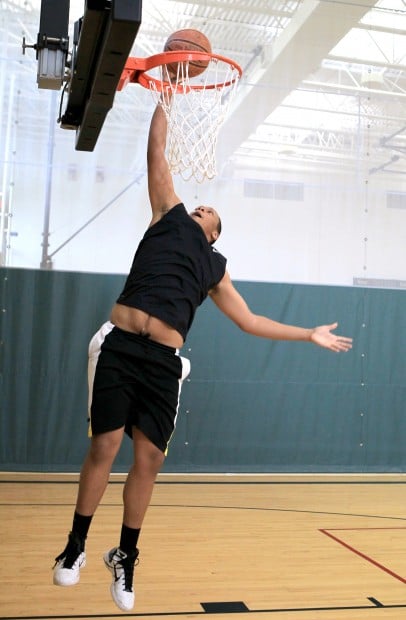 Marvin Jones, 17, dunks the ball at the RiverChase Recreation Center in Fenton on Monday, March 26, 2012. Jones used his love of playing basketball to achieve his goal of losing weight. Photo by David Carson, dcarson@post-dispatch.com

When he was a middle school student, Marvin Jones didn't think much about his weight. But a visit to his pediatrician helped to change his mindset.

"I showed him the chart, I had his weight from birth, as a child and up to middle school," said Dr. Joyce "Dr. J" Johnson, a pediatrician practicing in University City. This was five years ago, when Marvin was a sixth-grader who, at 6 feet, weighed more than 290 pounds.

Johnson showed Marvin how his past weight gain could affect his future weight gain.

The chart was part of the educational segment of Johnson's weight-loss program for children, she said.

"He had started noticing girls," she said. "For boys or girls, that's when they make the changes they need to make."

"That can be a trap for parents and children. They think they're doing something healthy when they're actually overdoing it."

Jocelyn Jones, Marvin's mother, said she learned about Johnson through friends. Until then, her search for a weight-loss clinic for her son had been futile.

"The hospitals would tell me that (her son) could come in if he was sick, but nothing just for weight loss," she said.

Until Marvin saw the chart, he had little pressure to drop pounds.

His parents made sure they said nothing critical about his appearance. Instead, they complimented him on his achievements.

He was attending Hope Lutheran School in St. Louis, which had strict policies against teasing, he said. So he was never teased or bullied about his weight.

After the shock treatment from Johnson, Marvin cut back to a couple of glasses of milk a day and reduced his meal portions.

"Now if I have pizza, I only have one or two pieces," he said. He eats small squares rather than large slices.

"I would take them all to Schnucks and teach them how to read food labels," she said.

The figures for his weight loss are skewed by his growth.

As a sixth-grader, he weighed 298 pounds. Over 18 months, he lost nearly 100 pounds through exercise and eating smaller portions, Jocelyn Jones said.

Then Marvin had a growth spurt.

He started his freshman year in high school at 6 feet 4 inches. That's why the coach recruited him for the basketball team and then ran him to exhaustion.

"Those (workouts) were, wow, tough," Marvin said. He played his freshman and sophomore year for the high school.

He stays active doing volunteer work, and being involved in organizations at school and church, including mentoring younger students. His grades are high enough that he's already getting letters from colleges.

Jocelyn Jones said Marvin's asthma was an additional problem when her son was overweight. But he didn't let it hamper his physical activity, she said.

"Not that much," Marvin said. "I'd get out of breath if I walked up too many stairs."

The asthma severity decreased with his weight loss and athletic training.

Marvin splurges now and then when he's out with friends. Otherwise, at home, he and his parents have eliminated fried foods and added more healthful ones.

"And that's been healthier for us," Jocelyn Jones said .

Underaged, Oversized • Goal is to promote healthy eating from childhood through adulthood.

St. Louis County woman leaves own kitchen to shape up

She exercises more and eats every meal out with her husband.

When Ed Carriker decided to take part in the sixth St. Louis Lose to Win Challenge, he did it for a child he has not yet met.

The Post-Dispatch examines childhood obesity and its effects on our community's health and economy. About one in five children and teens in th…

Throughout this year, the Post-Dispatch will periodically focus on childhood obesity and its effects on our community's health and economy. Ab…

Marvin Jones, 17, dunks the ball at the RiverChase Recreation Center in Fenton on Monday, March 26, 2012. Jones used his love of playing basketball to achieve his goal of losing weight. Photo by David Carson, dcarson@post-dispatch.com