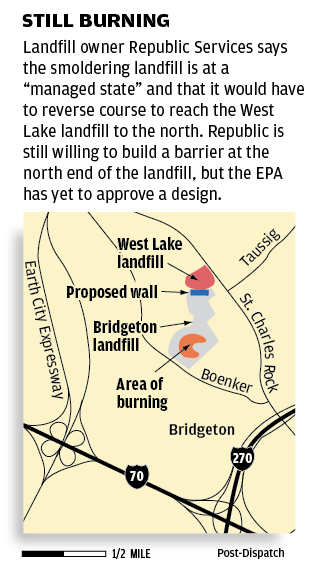 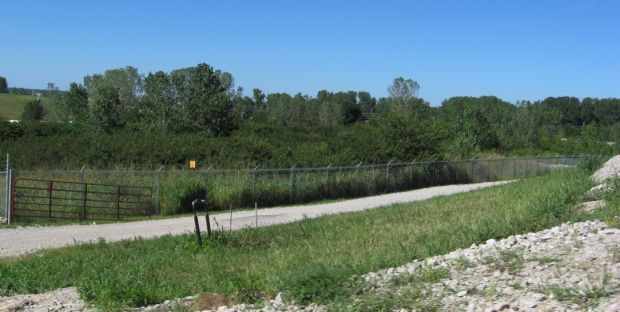 Inside the Bridegton landfill complex, a fence bars access to the West Lake Landfill, where radioactive material was illegally dumped more than 40 years ago. photo by Jacob Barker

Construction on a barrier between the smoldering Bridgeton Landfill and the radioactive West Lake Landfill won’t start for at least 18 months, according to a new analysis from the Army Corps of Engineers.

The Environmental Protection Agency, which oversees the West Lake Superfund site, had announced a start date of June 2014. A spokesman for the agency could not be reached Wednesday.

The lengthy delay is necessary because engineers have not determined the location of all radioactive materials in West Lake, where Cold War-era nuclear waste was dumped illegally more than 40 years ago, according to the Corps’ report dated Aug. 25 and released Wednesday by the EPA.

“Because of the subsurface investigative work that remains to be completed and the technical challenges for an isolation barrier constructed within a landfill, the duration of the design and construction process will be lengthy,” the report says.

The engineers also said the movement of the fire is unpredictable, and they don’t have a timetable for when it might reach the radioactive waste.

The Corps was tapped earlier this year to help the Environmental Protection Agency determine the location and scope of the barrier aimed at keeping the underground fire from reaching the nuclear waste. The barrier could go as deep as 180 feet to block all of the radioactive material buried at West Lake.

The EPA has asked the landfills’ owner, Republic Services, to prepare a more detailed barrier plan.

The southern section of the Bridgeton Landfill has burned underground for more than three years. Army Corps engineers said there is potential for another underground fire in the northern section, which is closer to the nuclear waste.

They contradict report issued last month by a consultant for the state.

The city of St. Louis and its airport have an effective veto over any barrier plans.

Company has spent $125 million to fix problems at the Bridgeton Landfill, but some are still worried about the radioactive dump next door.

Inside the Bridegton landfill complex, a fence bars access to the West Lake Landfill, where radioactive material was illegally dumped more than 40 years ago. photo by Jacob Barker