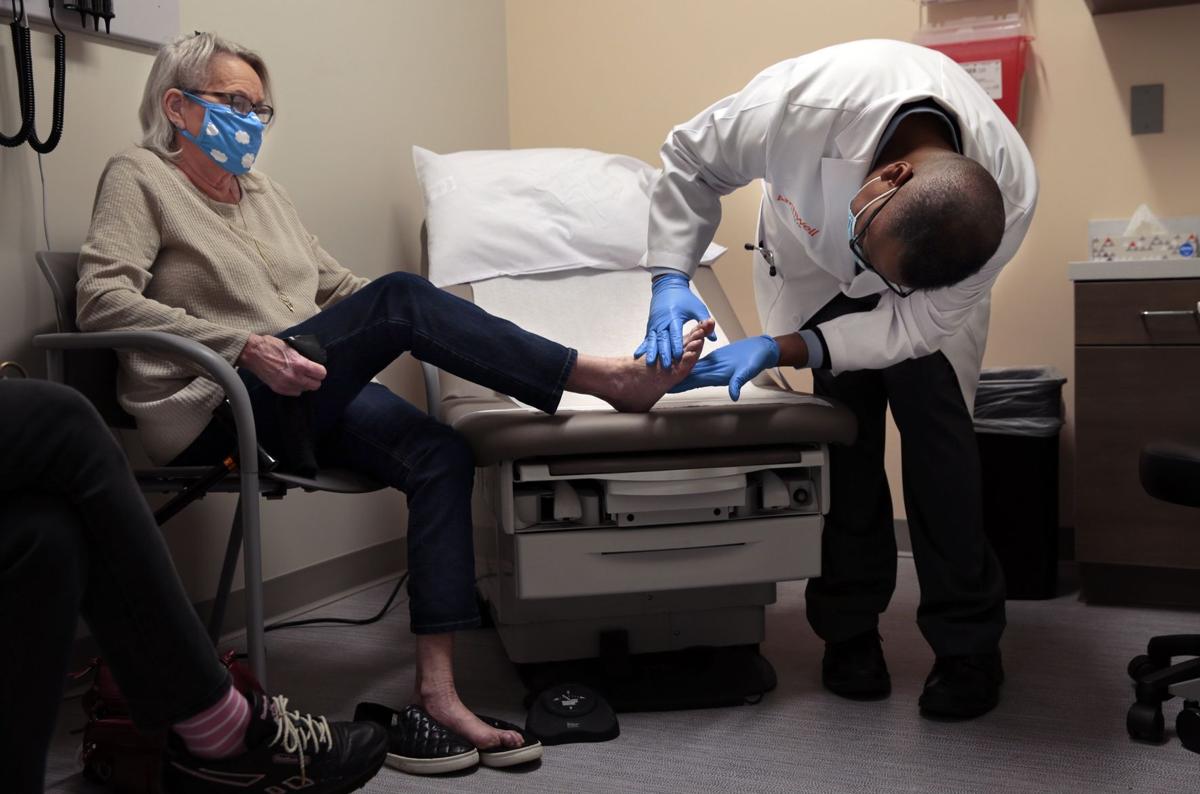 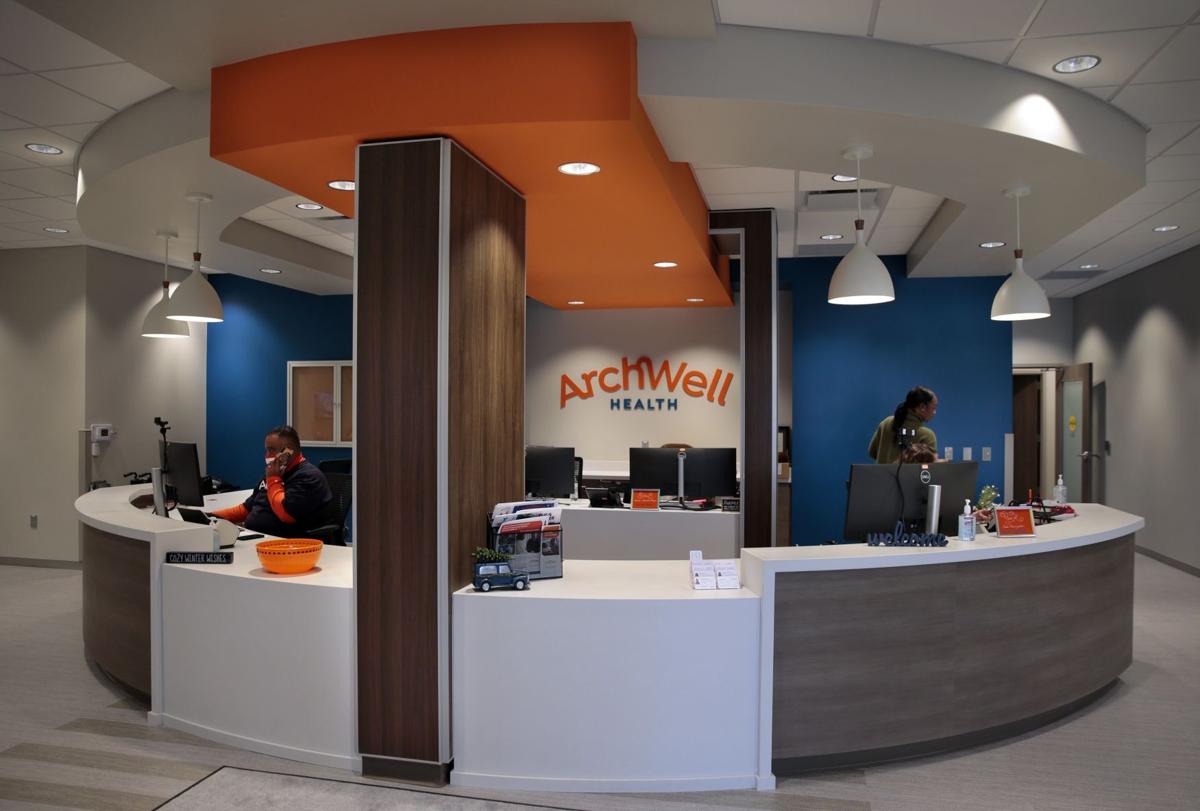 The check-in station is seen at ArchWell Health in Overland on Tuesday, Nov. 16, 2021. Photo by Robert Cohen, rcohen@post-dispatch.com 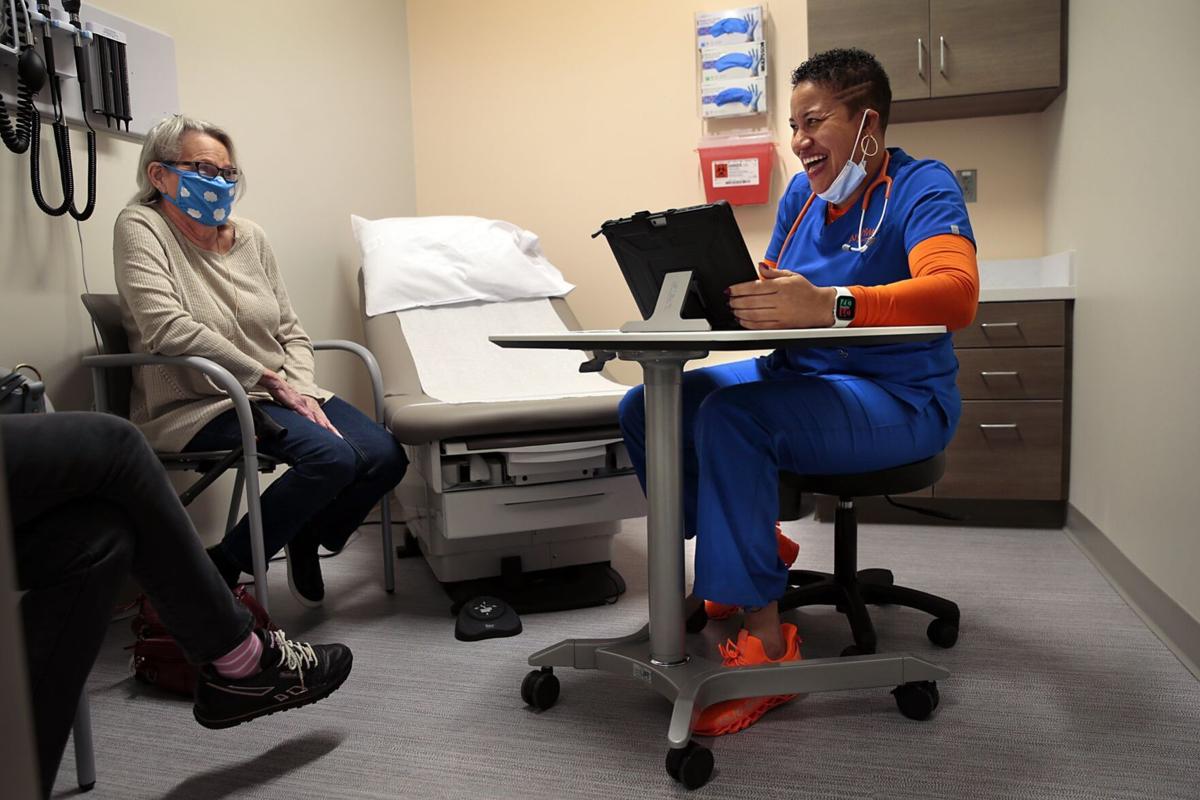 Stephanie Hester, RN-MSN, jokes with new patient Nancy Scheffler, 69, as she works on a cognitive test at ArchWell Health in Overland on Tuesday, Nov. 16, 2021. Hester removed her mask temporarily to aid Hester in watching her mouth form the test words. Photo by Robert Cohen, rcohen@post-dispatch.com 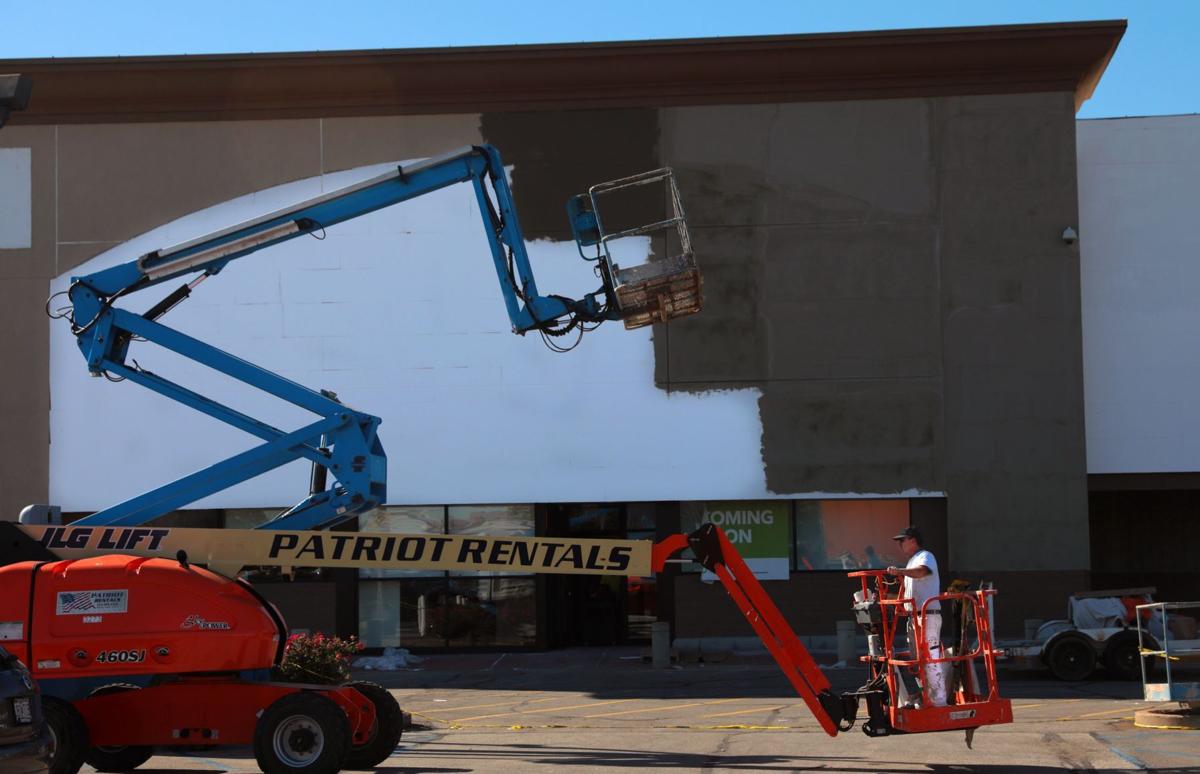 Construction equipment is stored for the day at the future home of Oak Street Health Tower Grove in the old Shop 'n Save building at 3863 Gravois Avenue on Monday, Oct. 18, 2021. Photo by Robert Cohen, rcohen@post-dispatch.com. 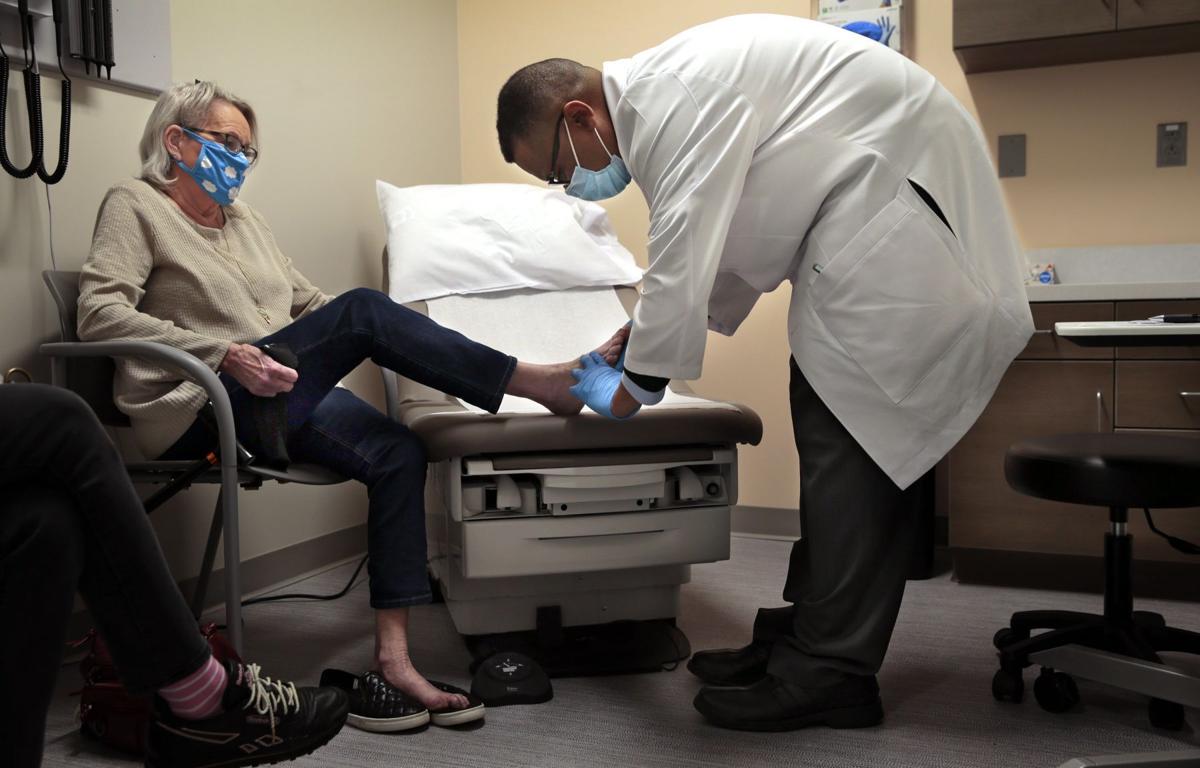 OVERLAND — As the number of baby boomers reaching retirement age continues to climb, the St. Louis area is seeing a surge in new seniors-only health clinics. In the past two months, eight such clinics have opened, providing much-needed care in East St. Louis, the city of St. Louis and north St. Louis County neighborhoods.

The new clinics are focused on those enrolled in Medicare Advantage — managed care plans that operate based on value rather than volume.

They are not your typical doctor offices.

The clinical staff provides transportation, same-day appointments and on-site prescriptions. They offer meetings with dieticians and social workers. They coordinate care with specialists.

“The focus is much more on prevention and wellness and trying to be proactive about their health, rather than just responding to when diseases get out of control or when new or concerning symptoms develop,” said Dr. Justin Huynh, senior medical director at Oak Street Health. “It is very different than most of the primary care that patients are used to.”

At ArchWell, staff refers to patients as members because they want the facilities to feel more like a community hub, said Dr. Janell Wilson, the medical director for ArchWell’s St. Louis market.

“We’re not just doctors taking care of their medical issues,” Wilson said. “That’s why they’re ‘members.’ We want them to come in, interact with us, come into the activity center, use us for whatever they need. Sometimes, they may not be sick. They just need to come in and talk, and we can do that.”

The model is based on the idea that seniors can avoid higher medical costs down the road if they receive coordinated care and a thorough assessment of their chronic conditions and social needs.

“We are trying to take a more holistic approach,” Huynh said. “There are many other factors that contribute to health, and if we don’t address those, we are not going to give the best care or get the best outcomes for our patients.”

Communities where residents face barriers to care and stressful living conditions are where the model is needed most, the directors say. Residents often find themselves having to travel to large hospital campuses for appointments.

The new clinics are located next to grocery stores, salons and sandwich shops.

“We want to put these offices in the community,” Wilson said. “When you look at the number of people and the age of who we think needs care, St. Louis has a large population that would benefit from this care and that’s what we’ve seen … When they come in and see the center, they’re just amazed that it’s there.”

Medicare is a federal government program that people pay into while they are working; it provides health insurance for those age 65 and older.

Enrollees typically pay a monthly premium that covers outpatient care and doctor visits ($148.50 on average) and share a cost each time they use those benefits. Prescription coverage also usually involves extra cost.

Medicare Advantage plans, however, are offered by private insurance companies and are similar to employer health care coverage. The insurers receive a set amount of money for a person’s care every month, whether or not the person uses services.

The health plans are responsible for everything from processing claims to determining the necessity of treatments. Enrollees typically must choose from a list of certain physicians or pay extra.

Most Medicare Advantage plans do not charge anything additional beyond the premium that Medicare already charges. A majority also include prescription drug, vision, telehealth, hearing aid and dental benefits.

Enrollment in Medicare Advantage plans has more than doubled over the past decade. More than 26 million people are enrolled, accounting for 42% of the Medicare-eligible population, according to a report by the Kaiser Family Foundation. In Missouri, it’s 43%.

Enrollment has increased by 10% the past two years and is projected to keep rising, accounting for more than 50% of beneficiaries by 2030.

“Part of that is because folks that are aging into Medicare now are much more used to being in these plans,” Weisgrau said. “Everybody who is coming off of employer-sponsored coverage is familiar with managed care, so they are more comfortable with these type of plans than people previously were.”

Nashville, Tennessee-based ArchWell formed in February and has opened 15 clinics across the U.S. In addition to the sites in St. Louis, three are in the Kansas City area, and the rest are in Alabama, Oklahoma and North Carolina.

Oak Street Health, headquartered in Chicago, has operated since 2012 and recently expanded to include over 140 locations in 18 states.

Each of the St. Louis-area clinics will have the capacity to serve about 3,000 seniors.

With over 70 million Medicare beneficiaries and about 10,000 baby boomers being added to the rolls every day, there is a growing need for cost-effective care.

Weisgrau said the data is mixed, however, on whether Medicare Advantage plans actually improve health care outcomes and save the federal government money.

Because the health plans get paid more for complex patients with more illness, the industry has been accused of “upcoding” — adding diagnoses to make enrollees appear less healthy than they are.

Many insurers are wanting to get in on the business. A new KFF analysis found a record 3,832 Medicare Advantage plans will be available in 2022, an increase of 8% over 2021 and the largest number of plans available in more than a decade.

Medicare Advantage plans may not be the best option for everybody, Weisgrau said, and navigating the choices can be difficult. People can receive free and unbiased Medicare counseling in Missouri by calling the state’s CLAIM program at 1-800-390-3330.

Dr. Otha Myles is the director of ArchWell’s Overland clinic. He is currently the clinic’s only doctor, but he hopes to eventually be joined by more. The doctors will each care for a maximum of 500 patients, instead of the typical 3,000 for a primary care doctor.

Myles decided to close his private medical practice in a wealthier part of southwest St. Louis and come to ArchWell. The pandemic had hit his practice hard as people put off their routine and preventative care.

“This is just a great model that allowed me the opportunity to be a good old-fashioned doctor that loves to take care of patients and not have to deal with the administrative work,” Myles said.

On a recent day at the Overland clinic, Myles saw 70-year-old Nancy Scheffler, who lives nearby and is enrolled in Medicare Advantage. This was her second visit.

She learned about the clinic from a flyer delivered to her home about an open house where attendees got free box lunches, listened to live music, met the mayor and were greeted by St. Louis Cardinals’ Fredbird.

Scheffler said she liked how the clinic was closer than SSM Health DePaul Hospital in Bridgeton, where she had been going for care.

She was getting screened for the first time for dementia and depression, she said. Her first visit included a slew of screenings for things like heart and nerve issues. Myles was also addressing her concerns about balance and numbness in her feet.

“You feel like you are at home here,” Scheffler said. “It seems like these people take their time with you.”

The most important things about building credit

Five reasons you should be eating more beetroot

Five reasons you should be eating more beetroot

What you should ask if retirement is just around the corner

What you should ask if retirement is just around the corner

Five tips for exercising during winter

Five tips for exercising during winter

Dear Dr. Roach • I am one of four daughters, ages 69 to 61. Our dad is 95 and still lives independently, although one of us four girls comes e…

Dr. Roach: Unrelenting back pain was a red flag symptom of cancer return

Dear Dr. Roach • My father died two years ago at age 73. For about six months, he had been experiencing excruciating back pain, which surgery …

Dr. Roach: How much sun exposure is needed to make vitamin D?

Dear Dr. Roach • Does our skin make vitamin D from sun exposure through a car’s windshield? Sometimes I expose my stomach for about 10 minutes…

Q • Thank you for writing about home tests for COVID-19. I developed a headache and sore throat while at work (at a school). Because it took t…

Dr. Roach: The complicated relationship between pain and blood pressure

Dear Dr. Roach • I have sciatic pain. I do my best to mitigate the pain with exercise. The only painkiller I can tolerate is aspirin. I have b…

Dr. Roach: Cartilage inflammation is one source of ear pain

Dr. Roach: What makes the COVID vaccine so great?

Dear Dr. Roach • I had COVID-19 in February 2021. I had no fever, no loss of taste or smell, lasted two days with no persistent symptoms at al…

The check-in station is seen at ArchWell Health in Overland on Tuesday, Nov. 16, 2021. Photo by Robert Cohen, rcohen@post-dispatch.com

Stephanie Hester, RN-MSN, jokes with new patient Nancy Scheffler, 69, as she works on a cognitive test at ArchWell Health in Overland on Tuesday, Nov. 16, 2021. Hester removed her mask temporarily to aid Hester in watching her mouth form the test words. Photo by Robert Cohen, rcohen@post-dispatch.com

Construction equipment is stored for the day at the future home of Oak Street Health Tower Grove in the old Shop 'n Save building at 3863 Gravois Avenue on Monday, Oct. 18, 2021. Photo by Robert Cohen, rcohen@post-dispatch.com.