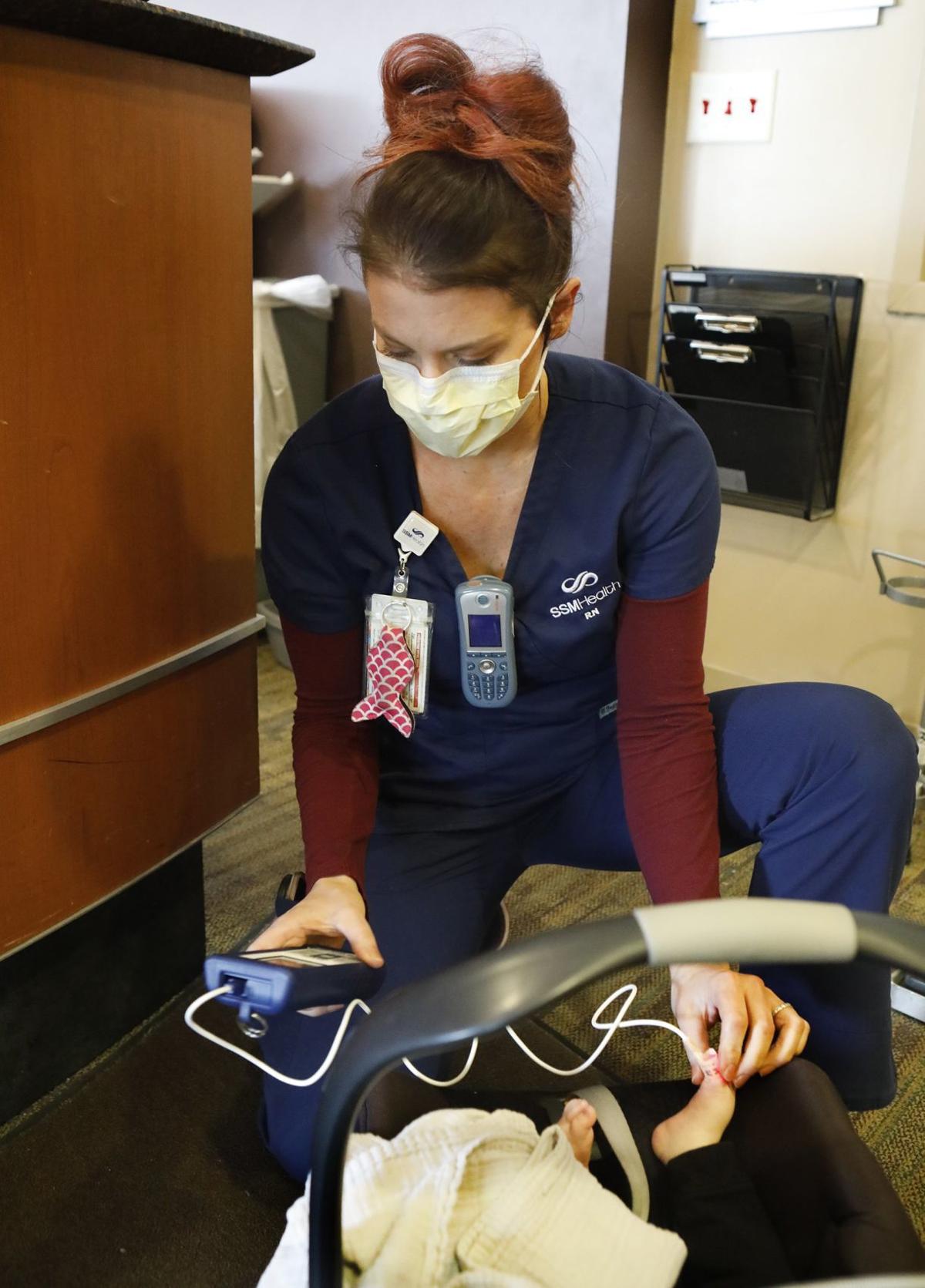 Emergency Department Nurse Angela Shaw takes the temperature of a baby in the emergency reception area on Thursday, Feb. 27, 2020, at St. Clare Hospital in Fenton. Shaw is wearing an isolation droplet mask to protect herself from people coming into the hospital with contagious diseases. Photo by J.B. Forbes, jforbes@post-dispatch.com 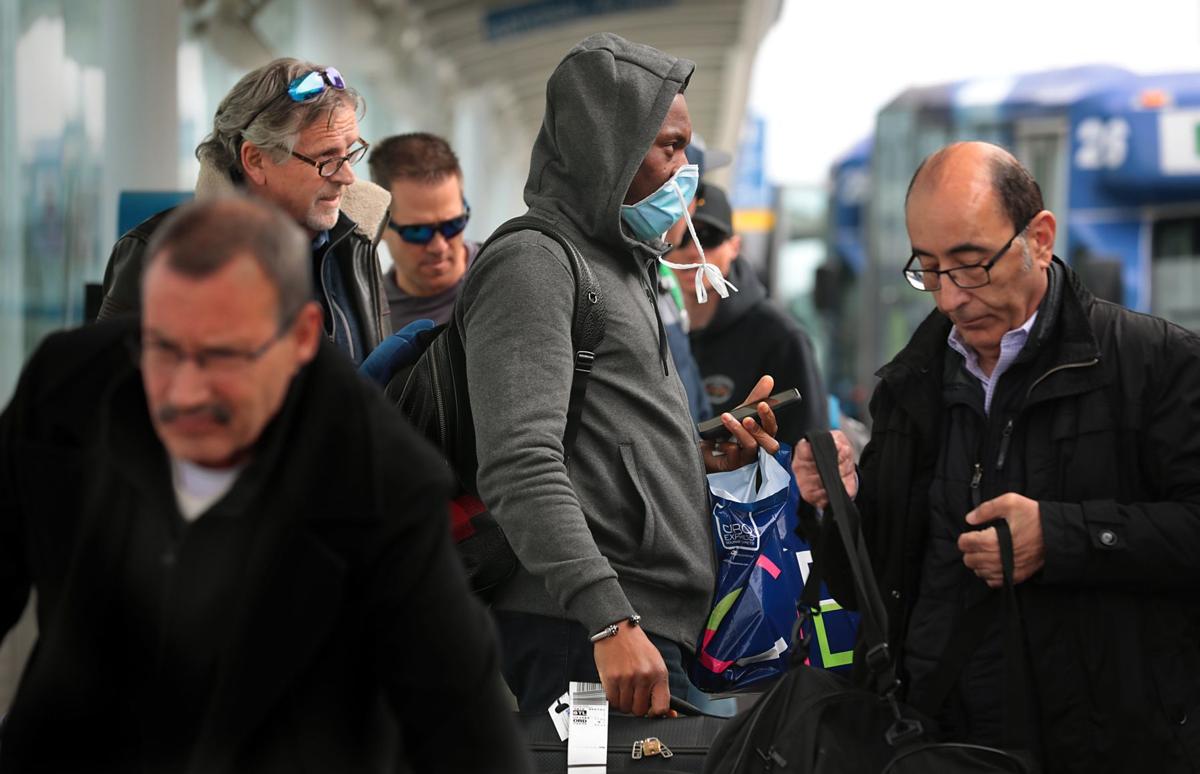 Michel Kamga of Maryland wears a mask to protect himself against the coronavirus as he arrives at St. Louis Lambert International Airport for a local wedding on Thursday, Feb. 27, 2020. Kamga was taking precautions after getting sick on a recent trip to New York. "I think it was just a cold," said Kamga. Photo by Robert Cohen, rcohen@post-dispatch.com 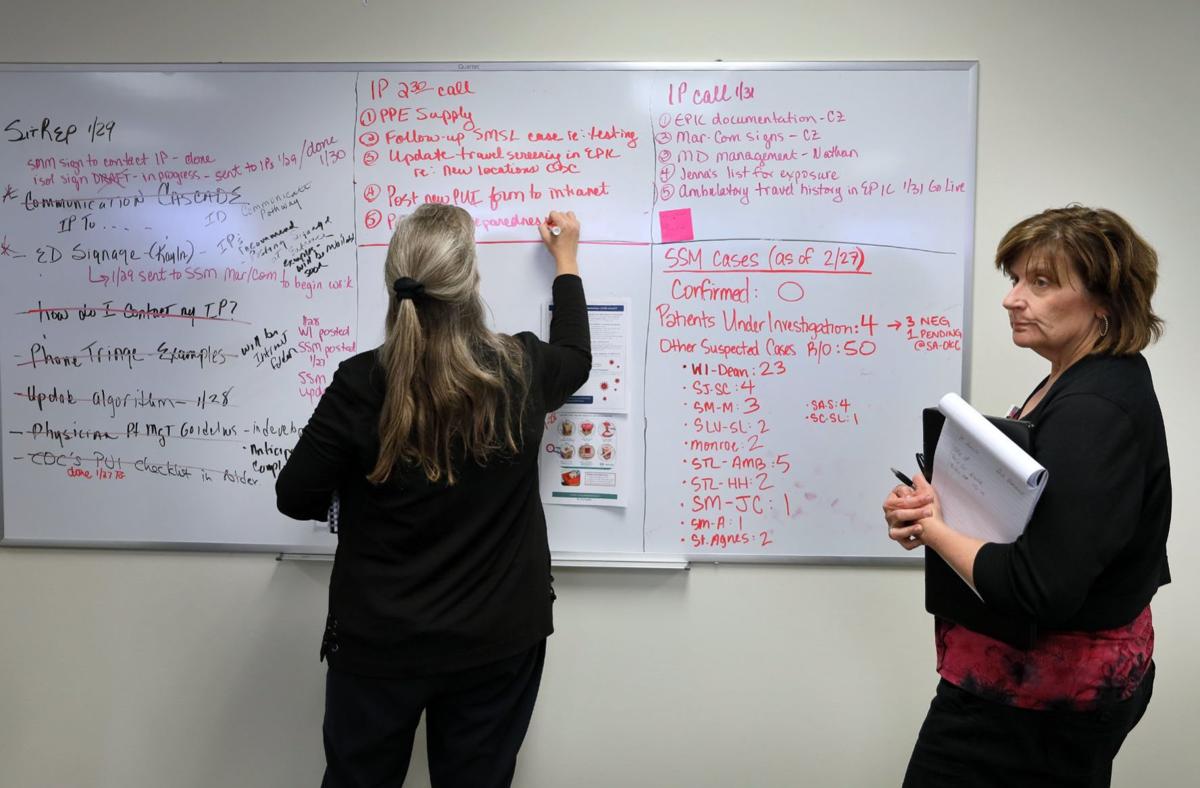 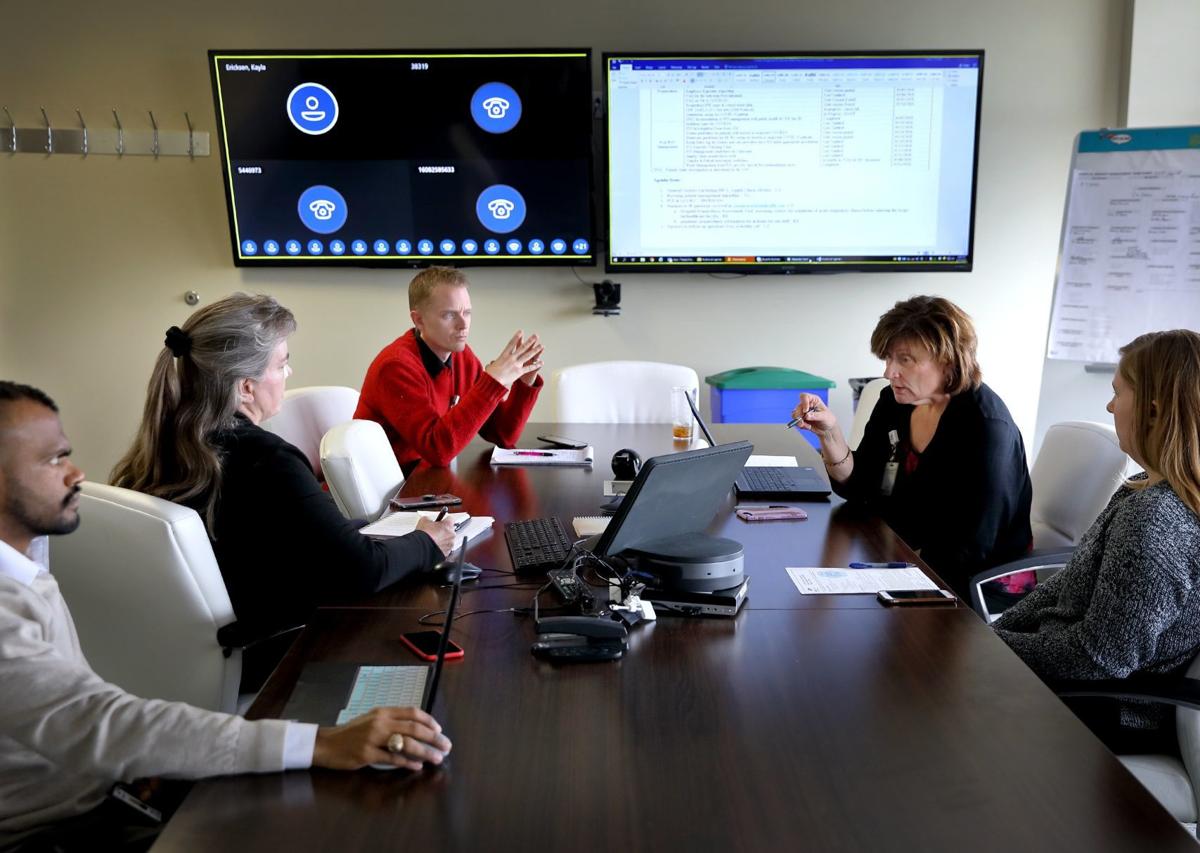 CREVE COEUR — Three large whiteboards at SSM Health’s corporate headquarters help keep track of the rapidly changing details of COVID-19, the disease caused by the newest strain of coronavirus. The boards list who is in charge of key areas such as supplies and infection prevention, staff questions that need answers, and updates and guidance from federal health officials.

Scribbled in a red dry-erase marker are the numbers of patients who have gone to each SSM hospital — the system has 23 hospitals, including eight in the St. Louis area — concerned that they’ve been infected by the virus.

Then there are the even smaller numbers of patients who met enough risk factors to merit referral to local and state health departments. To date, only six SSM patient cases have reached the state level, where they are considered for testing by the U.S. Centers for Disease Control and Prevention. None have met the requirements for federal testing.

“That’s the ‘Hey, let’s not get too excited about this,’ but …,” said Dr. Alexander Garza, SSM’s chief medical officer. It’s a matter of preparing for when the number of infected patients rises, not if, he says.

Efforts to contain the virus by identifying travelers who may have been exposed are proving increasingly futile. “The odds of it escaping those protective measures are growing every day,” Garza said.

That reality prompted the CDC to warn this week that the spread of COVID-19 is inevitable in the U.S., and area hospitals and local public health officials say they are stepping up preparations to be ready for any scenario.

On Thursday, Missouri joined the growing list of states with a laboratory approved by the CDC to test patients for the virus. The test can provide same-day results rather than the previous two- or three-day wait.

Dr. Randall Williams, director of the Missouri Department of Health and Senior Services, said having immediate results improves efforts to contain the virus.

Health officials are working “to provide timely and accurate information for the possibility of a future positive case,” Williams said in a statement. “The risk for infection still remains low, and we will continue to strategically align with all of our partners under our operating principle of hoping for the best and preparing for the worst.”

Experts at area hospital systems are constantly monitoring the latest guidance from the CDC, disseminating updates quickly to staff and making sure enough protective gear is on hand. Public health officials are also working to educate the public on how to keep themselves healthy and quickly respond to questions from legislators, schools and businesses.

“There will be cases in our region and our area, and people should be thinking about how to protect themselves,” said Dr. Hilary Babcock, who directs infection prevention efforts at BJC HealthCare facilities, which includes more than a dozen hospitals in Missouri and Illinois.

When the Post-Dispatch talked to Babcock on Tuesday, none of the BJC facilities had seen any patients requiring testing for the virus. “Not yet,” she said then.

Two days later, BJC’s Belleville Memorial Hospital revealed it cared for a patient that the Illinois Department of Public Health was testing for the virus. Results are expected in the next few days, BJC said.

Across Missouri, more than 60 people have been evaluated and monitored for the virus because of their travel history or possible exposure. Williams declined to be more specific when asked by the Post-Dispatch, but said a “much smaller number” met the criteria for testing. None have tested positive, and no test results are pending, he said.

At BJC and other area hospital systems, signs at the entrances of hospitals and clinics warn visitors to immediately alert a staff member if they have flu-like symptoms and have traveled to China, so staff can immediately isolate them for further screening.

Those signs are in the process of being updated to include other international travel, Babcock said. Screening questions also changed this week to include broader questions about recent travel, not just to China.

If people suspect they may be sickened with the virus, they should first call the urgent care center, doctor’s office or clinic they plan to visit, Babcock explained. If they are considered at risk, patients can be directed where to go for screening. Health care providers can meet them at the door, put a mask on them and take them to an isolation room.

“The short message is, call your provider first,” Babcock said.

Hospital systems began dusting off their emergency plans soon after the new coronavirus was first identified in Wuhan, China, in December. Having prepared for the threats of SARS, MERS, H1N1 and Ebola in the past, it’s just a matter of fine-tuning those plans to what they learn about the newest virus, officials say.

“Though it is a lot of work,” Babcock said, “a lot of policies and procedures are already in place that make this easier if we had not thought about this before.”

Researchers are still learning about the virus. While it has similar symptoms to the flu, it appears to spread quicker and be twice as deadly.

While people can get a vaccine or possess some antibodies that provide protection against the flu, there is no vaccine to provide immunity against the new coronavirus.

“There’s no innate immunity within the population to this virus,” Garza said, “and so potentially everybody is at risk for acquiring the infection.”

Area hospital system officials say they have ordered extra protective gear such as masks and gowns, reminded staff how to properly wear and remove gear and what to do if they themselves feel sick.

“We also update them on the work we are doing so they feel confident they will be able to work safely,” Babcock said.

While hospital officials are quickly responding to constant updates, they say they are also beginning to think about what they will need if large numbers of people get sick.

A command team might have to work full-time on virus response. Patients may need to be separated on wings if isolation rooms are overwhelmed. Drive-through screening clinics could be needed. Employees might have to be paid to stay home to take care of children. Others may have to work more.

In addition to frequent hand-washing and staying home if sick, officials warned that people need to prepare for scenarios that might require school closures, working from home, canceling large gatherings and having prescriptions filled.

In another sign of how Missouri is ramping up its response to COVID-19, the state health department issued an emergency rule this week adding the virus to a list of infectious diseases, such as anthrax and ricin.

The move, which goes into effect on Monday, is designed to boost the response rate in times of a potential health emergency.

“It ensures that should a case be confirmed in Missouri, the authorities of the department are specifically stated and clarified so as to expedite any necessary public health response,” said Lisa Cox, DHSS spokeswoman.

Williams said state and local health department officials have the authority to force school closures or cancel large gatherings such as concerts if they feel it’s necessary to protect the public’s health.

One of the big questions for health officials, Williams said, is if families should cancel their summer travel plans.

Hosptial workers wear masks to protect others and themselves

Hospital workers wear masks to protect others and themselves

The newly identified virus, which was named on Feb. 11 by the World Health Organization, is a member of the coronavirus family that can cause colds or more serious illnesses such as SARS and MERS.

It was first identified in Wuhan, China, in December, and likely originated in animals and migrated to humans. Many of the people who were first infected worked or shopped in the Huanan seafood wholesale market.

It’s since spread to at least 48 countries, infecting about 82,000 people globally and killing at least 2,800.

Health officials believe the virus spreads mainly from droplets when an infected person sneezes or coughs. There is no vaccine to provide immunity against COVID-19.

Because it is a viral pneumonia, antibiotics don’t work. Nor will existing antiviral drugs used to fight flu. That means health care providers focus on treating symptoms, helping patients’ lung function and providing a steady flow of liquids to prevent dehydration.

The mortality rate is believed to about 2%, but that may change as researchers learn more.

To avoid becoming infected or spreading the virus, wash your hands thoroughly, avoid touching your eyes, nose and mouth, stay home if sick, avoid close contact with people who are sick, clean and disinfect surfaces.

Dr. Randall Williams has drawn criticism for his department's handling of the roll out of the state's medical marijuana program

One sure thing about COVID-19: No telling how many people have it

Why is data on the new coronavirus so limited?

Coronavirus stress test: Many of the nation’s top-rated nursing homes have infection-control lapses

In all, 9,372 nursing homes, or 61%, were cited for one or more infection-control deficiencies, a Kaiser Health News analysis showed.

During a pandemic, states’ patchwork of crisis plans could mean uneven care

Only 36 states have blueprints for ‘crisis standards of care’ to sort out who gets what kind of medical care amid scarce resources. And not all the plans are of high quality.

Blood drives — and donors — fall off as coronavirus worries grow

Cancellations and no-shows for blood drives in states where the virus is spreading — and in ones where it’s not — pose risks for the nation’s inventories.

The Centers for Disease Control and Prevention gave huge cities roughly the same number of test kits as some rural spots, which crippled efforts by health officials to contain the virus.

Patient at Belleville hospital had been tested.

Emergency Department Nurse Angela Shaw takes the temperature of a baby in the emergency reception area on Thursday, Feb. 27, 2020, at St. Clare Hospital in Fenton. Shaw is wearing an isolation droplet mask to protect herself from people coming into the hospital with contagious diseases. Photo by J.B. Forbes, jforbes@post-dispatch.com

Michel Kamga of Maryland wears a mask to protect himself against the coronavirus as he arrives at St. Louis Lambert International Airport for a local wedding on Thursday, Feb. 27, 2020. Kamga was taking precautions after getting sick on a recent trip to New York. "I think it was just a cold," said Kamga. Photo by Robert Cohen, rcohen@post-dispatch.com