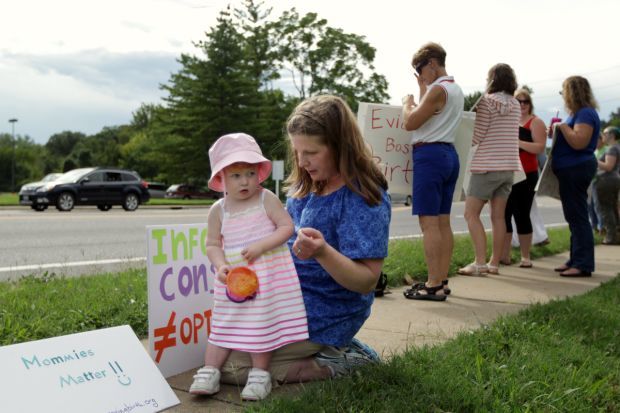 Erin Shetler, of Harvester, and her daughter, Amy, take a snack break during the Labor Day birth rally to bring awareness for maternity care issues on Monday, Sept. 1, 2014, at Deer Creek Park in Maplewood. Photo by Huy Mach, hmach@post-dispatch.com 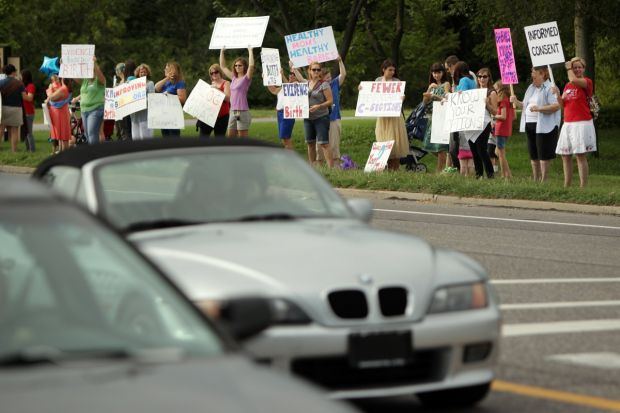 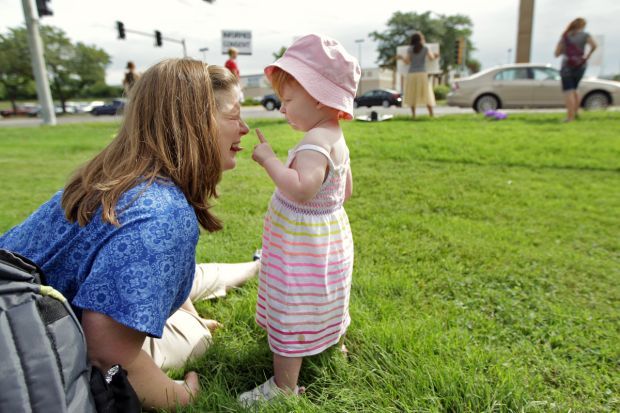 Erin Shetler, of Harvester, and her daughter, Amy, apply sunscreen before participating in Labor Day birth rally to bring awareness for maternity care issues on Monday, Sept. 1, 2014, at in Deer Creek Park in Maplewood. Photo by Huy Mach, hmach@post-dispatch.com

At first, Erin Shetler was angry the doctor had performed the procedures without her knowing. He had cut her vaginal opening, used vacuum extraction to deliver her baby and reached into her uterus to remove the placenta — all of which carry risks.

A month after the birth of her daughter, Shetler started to withdraw. She had nightmares and flashbacks, unable to stop replaying what happened.

Everyone told her that she had a healthy baby, that nothing else mattered. But that just made her feel worse. At six weeks postpartum, she lay on the bathroom floor and couldn’t get up. “I cried all day,” said Shetler, 37. “I felt like I was going to feel that way forever.”

New mothers are expected to be grateful and joyful. But research suggests as many as 30 percent of women experience debilitating traumatic stress after childbirth, and nearly a third of those may suffer Posttraumatic Stress Disorder, according to Prevention and Treatment of Traumatic Birth, a collective of birth and mental health experts whose mission is to increase awareness about the under-recognized issue.

Though trauma from childbirth can obviously be caused by tragic outcomes such as a stillbirth, birth advocates and researchers say many problems they hear stories about are preventable, involving situations in which patients’ rights to informed consent were not followed.

Women report feeling helpless and violated after having their wishes ignored; or being bullied, threatened and yelled at.

Last month, the quality maternity care advocacy organization Improving Birth began collecting and posting women’s traumatic stories as part of its Break the Silence campaign. Organizer Cristen Pascuci was inspired by the calls into the organization’s hotline, launched two years ago in partnership with Human Rights in Childbirth.

“The vast majority said, ‘I didn’t know what to do, and I didn’t know who to talk to,’ ” Pascucci said. “I wanted to give women a safe place to say, ‘This is what happened to me, and this isn’t OK.’ So other women can see their stories.”

The campaign involves a Facebook page where about 125 mothers have already posted their stories, a trauma toolkit, ways to get help and instructions on how to file a complaint. The effort also involves the launch of the Birth Rights Bar Association, an effort to educate and train lawyers about childbirth issues.

On Labor Day, thousands of families attended Improving Birth’s third annual awareness rally at more than 100 cities across the country. Shelter, who has undergone treatment for PTSD, attended the St. Louis area rally with her daughter, Amy, nearly 2. “I’m trying to heal through all this,” she said.

Shelter was not interested in a natural birth. She wanted pain relief and any necessary interventions. Her labor went fast.

She got an epidural right before the second phase of labor and pushed for 13 minutes. When she first saw her baby, she noticed a blue, bloody ring around her tiny head from a suction cup. Wondering why the doctor was still at the foot of her bed, he told her he had had to make an incision and was stitching her up.

“All of the sudden I realized all of these things had happened without me knowing, and I got really scared,” she said. “I felt like I was waking up at a frat party and was trying to piece together what happened.”

Informed consent is a basic rule in medical care. The patient has a right to be informed about the harms and benefits of a proposed treatment or medication before agreeing to it. A provider must explain the alternatives, including the option of doing nothing, and the patient has the right to accept or refuse the treatment.

The national association of obstetricians and gynecologists’ own statement about informed consent states: “The involvement of patients in such decisions is good for their health — not only because it helps protect against treatment that patients might consider harmful, but also because it often contributes positively to their well-being.”

It is especially important in maternity care to understand the rationale for any procedure or drug. The latest research shows that interventions in labor and delivery are often used routinely without a clear need, such as induction, drugs to speed up labor, episiotomy, continuous electronic fetal monitoring and cesarean section. Each intervention carries risks and side effects that often lead to other interventions.

“I really believe that more women are informed about these procedures, and are saying ‘No’ because they know the risks,” Pascucci said. “Women are more informed and speaking up for themselves and then getting denied and overruled.”

On the other hand, Pascucci also often hears that women didn’t know they had the right to refuse interventions.

A survey released last year involving 2,400 women who recently had babies, conducted by quality maternity care advocate Childbirth Connection, showed that many women undergo interventions without being involved in the decision or understanding the risks. Many said they held back from asking questions because they were concerned about being perceived as difficult or the provider seemed rushed.

Sarah Baker, a childbirth educator with Purple Lotus Doulas in Maplewood, teaches a birth preparation course that involves a week devoted to recovering from any previous negative birth experiences. Because so many had struggles, Baker created a new class called Healing from Birth.

“For the couples who come into my class, one of the most common things I hear was that they simply didn’t know they had other options,” Baker said. “They felt pressured into doing something they didn’t want to do and did not know how to handle that situation.”

Therapists say more new mothers are seeking help healing from traumatic experiences, but many still do not connect what happened in childbirth to symptoms such as sleeplessness, intrusive thoughts, detachment or outbursts.

“It’s a hard one to identify, because we don’t have a screening tool like we do for postpartum depression,” said Jamie Bodily, whose 13 years of seeing women struggle with traumatic births as a labor coach inspired her to get a degree in counseling. “It’s based on women’s perception of what happened, which she often doesn’t feel like sharing.”

There is a perception, counselors say, that women should just be happy they have a healthy baby in their arms, and it doesn’t matter how the baby got there.

“There’s a lot of guilt and shame even talking about that. … Of course she just wants a healthy baby, but it’s important for her to know what is happening to her body and her baby,” said Elizabeth Lowder, a counselor at Sage Tree Therapy in Richmond Heights who three years ago began applying her training in treating trauma victims to new mothers. “The lack of communication feels like a lack of respect, and it feels like a violation.”

Shetler’s doctor apologized, and Barnes-Jewish St. Peters Hospital, which has since closed its small labor and delivery department, promised to improve communication between patients and staff. The state licensing board investigated her complaint and found the doctor had not violated any regulations.

“Consent is an issue we can really tackle and make a difference,” she said. “It’s not that hard.”

• Repeatedly thinking about the trauma

• Being constantly alert or on guard

• Avoiding reminders of the trauma

Women can help with research about childbirth

Guideline saying women should not birth in water sparks backlash

Since doctors groups released their opinion denouncing the safety and benefits of water birth, women and waterbirth providers have been launching a defense.

Is a home birth a safe choice?

Excerpted from a previous Parent Chat on stltoday.com.

Lower-income women who signed up for a private policy in the new insurance exchanges will have access to additional coverage from their state's Medicaid program if they get pregnant.

As more women seek a natural birth without risky medical interventions, a new prenatal class is helping them meet that goal through hypnosis.

One nurse midwife calls moves 'a huge statement that they really care about what women want.'

Erin Shetler, of Harvester, and her daughter, Amy, take a snack break during the Labor Day birth rally to bring awareness for maternity care issues on Monday, Sept. 1, 2014, at Deer Creek Park in Maplewood. Photo by Huy Mach, hmach@post-dispatch.com

Erin Shetler, of Harvester, and her daughter, Amy, apply sunscreen before participating in Labor Day birth rally to bring awareness for maternity care issues on Monday, Sept. 1, 2014, at in Deer Creek Park in Maplewood. Photo by Huy Mach, hmach@post-dispatch.com