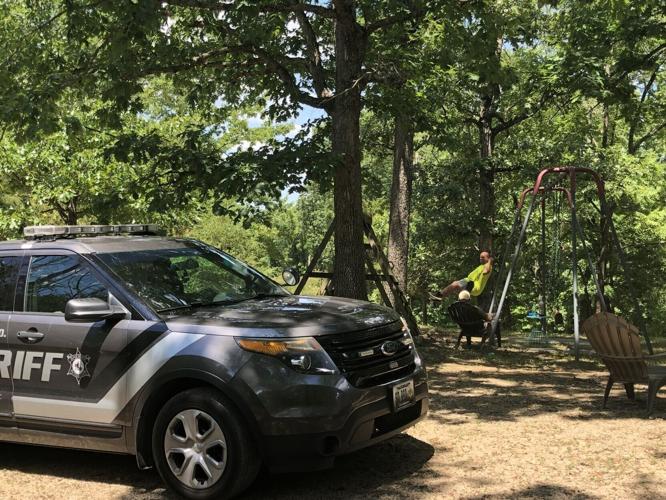 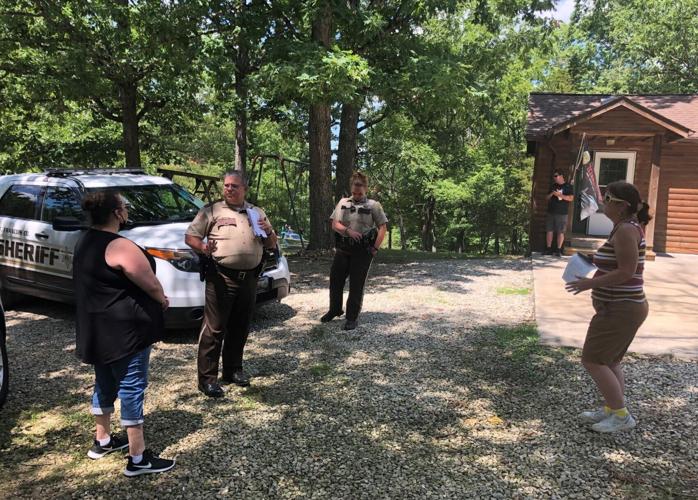 St. Francois County sheriff's Deputy Bruce Momot tries to work out a dispute between Calle Melkersman, of the nonprofit Sunnyhill, and Donna McCluskey, whose son is incapacitated. 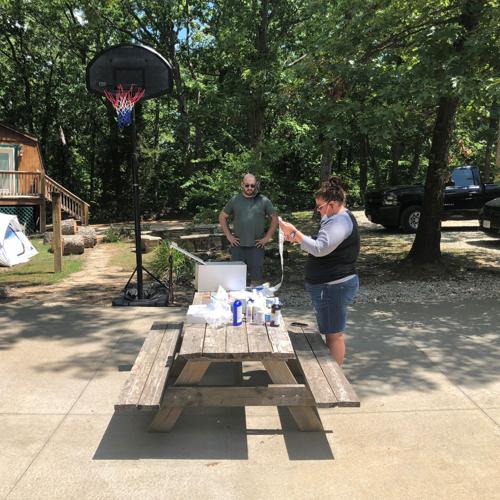 Sunnyhill employees prepare to turn in Jason Uhlmansiek's medications before discontinuing services at his St. Francois County home on July 14, 2022.

ST. LOUIS — More than two weeks after his in-home services provider quit, Jason Uhlmansiek remains in an emergency room, unsure of his future.

He’s not there to be treated for a laceration or infection. There’s nothing broken, his attorney says, other than the system that is supposed to help him.

“He never should have been there to begin with, so every day that he is adds to the injury,” said Vincent Heithold, representing Uhlmansiek on behalf of Missouri Protection & Advocacy Services. “The day he went, he had to be physically and chemically restrained. Also, psychologically and therapeutically, he’s probably had a setback in terms of his development.”

Uhlmansiek, 32, has developmental disabilities. He’d been living in his home at Lake Timberline in rural St. Francois County. Through a contract with the Missouri Department of Mental Health, Fenton-based Sunnyhill provided around-the-clock services for nine years. He required two caregivers at all times, three if he went to the dentist or doctor.

Earlier this summer, Sunnyhill gave the required 30-day notice that it intended to cancel its contract to care for Uhlmansiek and his sister. The reason remains unclear, though there had been several disputes over the maintenance of the property.

Sunnyhill pulled out July 14 without a new service provider in place, spurring a sheriff’s deputy to show up on scene to figure out last-minute options. Sunnyhill was poised to leave Uhlmansiek in the care of his legal guardian, Donna McCluskey, who adopted him from Romania when Uhlmansiek was 18 months old.

But he hadn’t lived with McCluskey in 22 years, and she said she was unable to care for him. She said he’s incapacitated, has the temperament of a 5-year-old in a man’s body, which is why he requires professional support. As a boy, he lived in a state institution that was accused of physically abusing him. In 2004, Uhlmansiek was awarded a $950,000 settlement in the matter.

As a short-term solution on July 14, the sheriff’s deputy worked out a plan for Sunnyhill to take Uhlmansiek to Parkland Health Center in Farmington. He remained in the emergency room on Monday.

Mental health advocates say his situation reflects broader challenges. Some state facilities have closed in recent decades because people have the legal right to treatment in the least restrictive environment. But the community support system in Missouri is often criticized for being underfunded.

Had he been in an institution, McCluskey said Uhlmansiek would have had more power to stop the discontinuation of services by filing a grievance or appealing the contract cancellation request.

Debra Walker, a spokeswoman for Missouri Department of Mental Health, didn’t comment on the specific case. In general, she said when notice to end residential services is given, it indicates the provider does not feel it can continue to provide the necessary care.

“Mandating a residential service provider to continue to provide care, beyond the 30 days, is not in the best interest of the individual or provider and could jeopardize the individual’s health and safety,” she said by email.

She said the state tries to find a replacement before services are cut.

When defendants are found incompetent, their cases stall until competence is restored. But the effective treatment is backlogged months in Missouri.

St. Francois County sheriff's Deputy Bruce Momot tries to work out a dispute between Calle Melkersman, of the nonprofit Sunnyhill, and Donna McCluskey, whose son is incapacitated.

Sunnyhill employees prepare to turn in Jason Uhlmansiek's medications before discontinuing services at his St. Francois County home on July 14, 2022.