Missourians to vote on Medicaid expansion as crisis leaves millions across U.S. without health insurance
0 comments
Share this
Subscribe for $1 a month
By Cara Anthony Kaiser Health News

ST. LOUIS — Haley Organ thought she had everything figured out. After graduating from a small private college just outside Boston, she earned her master’s degree, entered the workforce and eventually landed a corporate job here as a data analyst.

Life seemed to be going as planned until the national retailer that Organ worked for announced furloughs during the coronavirus pandemic. After nine weeks of mandatory leave, the 35-year-old was laid off. The company gave her a severance package and put an expiration date on her health insurance plan.

“I haven’t slept the whole night since about March,” Organ said earlier this summer. “I can’t turn my brain off, just worrying about everything.”

Organ filed for unemployment, adding her claim to more than 40 million others nationwide since the pandemic took hold in mid-March, according to the Department of Labor. That’s about 1 in 4 U.S. workers. As a result of the unemployment crisis, millions of people lost access to their private health insurance plans at a time when they might need it most.

Medicaid, the federal and state health insurance program for people with low incomes or disabilities, could have served as a safety net for Organ if she lived in one of the 37 states and the District of Columbia that have opted to expand under provisions of the Affordable Care Act. But in Missouri, Republicans who control both the governor’s office and the Legislature have said the state cannot afford its share of the cost of expansion and have been adamant foes of the ACA, helping lead a lawsuit now before the U.S. Supreme Court that may nullify the law.

That opposition by state leaders has meant adults like Organ who don’t have dependent children or specific disabilities cannot qualify for Missouri’s Medicaid program — even if their incomes are well below the poverty line.

“This is literally the first time in my life I’ve had to worry about health care coverage,” Organ said. “It’s kind of been a rude awakening for me.”

Voters in Missouri will decide Tuesday whether to expand eligibility for MO HealthNet program (Missouri’s Medicaid program) to provide insurance to more than 230,000 additional people in the state, including many who find themselves newly struggling for health coverage amid a national health crisis. More than 700,000 initial unemployment claims were reported in Missouri from mid-March through the first week of July.

If Medicaid expansion passes in Missouri, coverage for those newly eligible people would begin in 2021. Advocates for the measure say Medicaid expansion would also create jobs, protect hospitals from budget cuts and bring billions of federal taxpayer dollars back to the state.

Missouri is the latest red state to try expanding Medicaid with a ballot measure to circumvent recalcitrant legislatures. Oklahoma approved a measure June 30.

Voters decide on Aug. 4 whether to expand the health care program for the poor, joining a majority of states that already have.

But Missouri’s Republican Gov. Mike Parson, who has said he opposes expanding Medicaid, moved the ballot measure from the general election in November to the primary election on Tuesday. Democrats criticized the shift, noting that fewer voters traditionally turn out for the primary and suggesting it could be easier to defeat in August. The ongoing threat of COVID-19 could also keep some voters away from the polls.

In a statement, Parson said changing the election date will allow the state to prepare for the potential cost of expansion. But an analysis from Washington University in St. Louis suggests that expanding the program could save the state money by lowering the amount it must pay for uncompensated care and bolstering efforts to prevent certain diseases, thereby reducing treatment costs to the state. Under the terms of the Affordable Care Act, the federal government picks up 90% of the coverage costs for newly eligible enrollees, as compared with the 65% it pays for people who qualify under regular Medicaid rules.

Backers of expansion are cautiously optimistic that Missouri voters will approve the measure Tuesday, heartened by Oklahoma’s win last month and positive polling.

For people who qualify for the current Medicaid program, enrollment is open year-round, which means people can apply when needed.

“That’s why we call them safety-net programs,” said Jen Bersdale, executive director of Missouri Health Care for All, a group that has advocated for Medicaid expansion since 2012. “When you get dropped from a job, dropped from insurance, they are there to catch you until you’re back on your feet.”

Amid the pandemic, Medicaid already appears to be helping people newly out of work. In 22 states, Medicaid enrollment increased by an average 5% from February to May, according to Georgetown University Health Policy Institute data. Newer data for May in those same states suggests enrollment growth is accelerating.

Even without expanding the program, Missouri leads the group with an 8.8% increase since February in total Medicaid enrollment. While economic recessions often contribute to increasing Medicaid enrollment, the early spike in Missouri could signify reenrollment of a large number of people, mostly children, who had been dropped from the program two years in a row. A federal rule blocks disenrollment during the pandemic.

Even some Missourians already on Medicaid are worried about the ballot measure not passing. Without expansion of the program, Sally Terranova fears that her 16-year-old son, Colin, will be ineligible for Medicaid when he ages out of the kids’ coverage at age 19. He was diagnosed with Type 1 diabetes in 2016.

Terranova is concerned that her son wouldn’t be able to afford the insulin he needs without insurance. She worries even more when she hears stories about diabetics rationing their insulin.

“It’s bad enough he has this illness hanging over him,” Terranova said. “But he can live a good life and be healthy if he has access to health care.”

That’s one reason Terranova, 39, hopes to land a job with good benefits when she finishes graduate school in a year and half. She has studied social work for the past four years, so she understands the challenges low-income families face.

Terranova had moved from New York to Missouri to give her son a better life. They’ve called St. Louis home for 10 years, but the single mom is contemplating another big move for her son’s health. She’s thinking of going this time to a state that has already expanded the program.

Organ, whose health insurance expired in July, is now one of the lucky ones. She just got a new job and will get new health insurance when she starts next week. Still, she’s hoping the Medicaid measure will pass, as she now appreciates more than ever how much it could mean for others who have lost their jobs and lack coverage amid the COVID-19 pandemic. Instead of heading to a polling place Tuesday, though, Organ is planning to vote by mail.

“I’m trying to do everything I can to keep me and others safe,” Organ said. “But I want to make sure my voice is still heard.”

Kaiser Health News is a national health policy news service. It is an editorially independent program of the Henry J. Kaiser Family Foundation.

Teams are starting to test vaccines using messenger RNA or chimpanzee cold viruses to inoculate humans. Will their benefits last?

In Missouri, cost of Medicaid expansion remains a mystery

Under the old rules, Medicaid in Missouri did not cover most adults without children because the income threshold is among the lowest in the nation.

Some health policy experts question the usefulness of the change, given how expensive COBRA coverage can be for consumers, and how limited its reach. 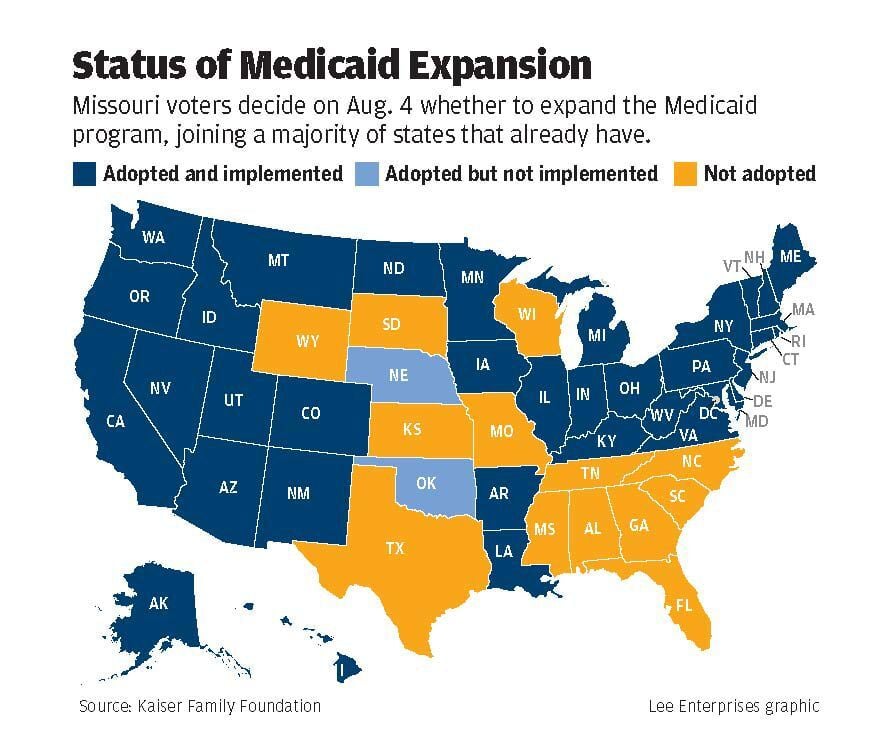 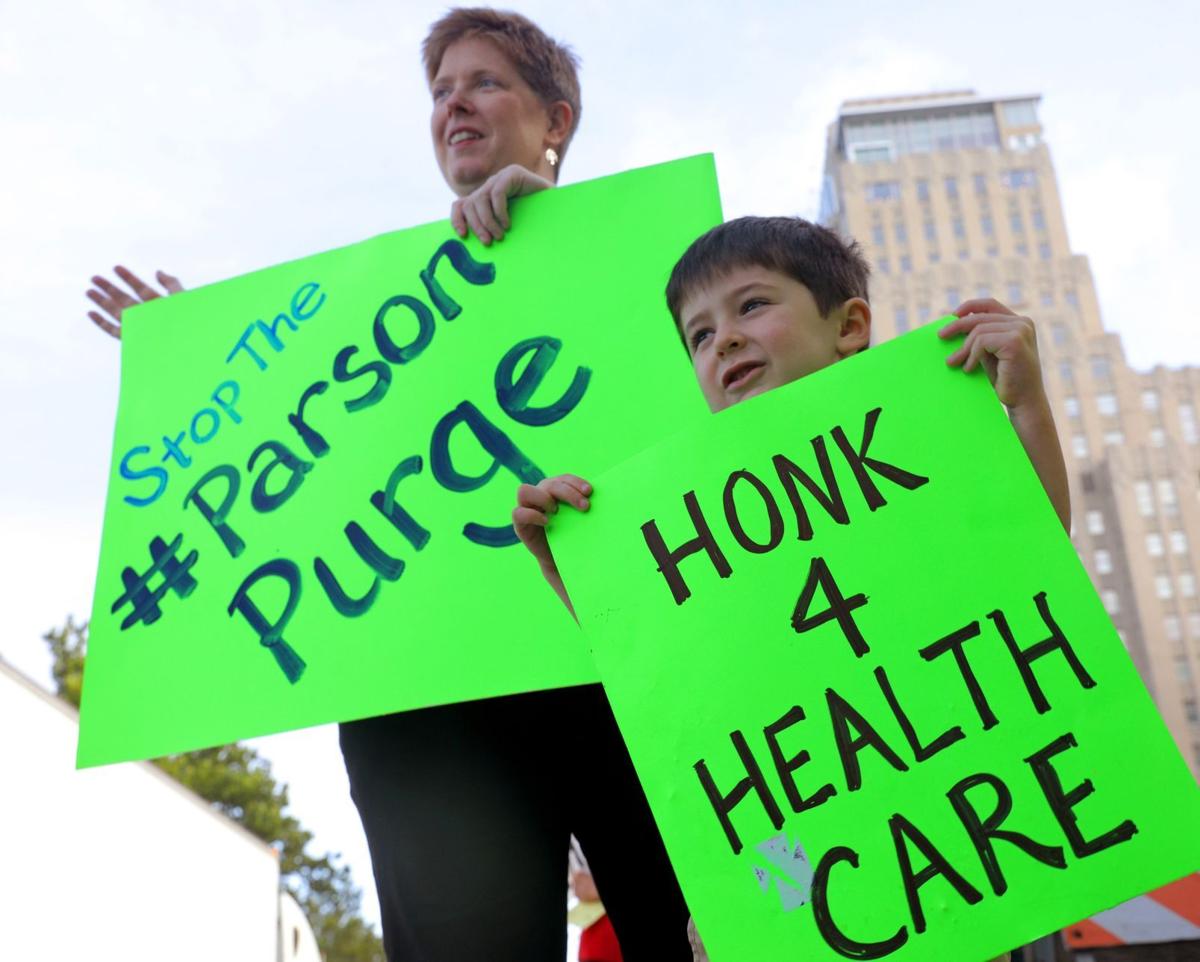 Jen Bersdale, executive director of Missouri Health Care for All, and her 4-year-old son Torin Bersdale, protest on Aug. 27 in St. Louis.