SSM ends labor and delivery and trauma services at St. Joseph Hospital in St. Charles
0 comments
Share this
Subscribe for $5 for 5 months
1 of 2 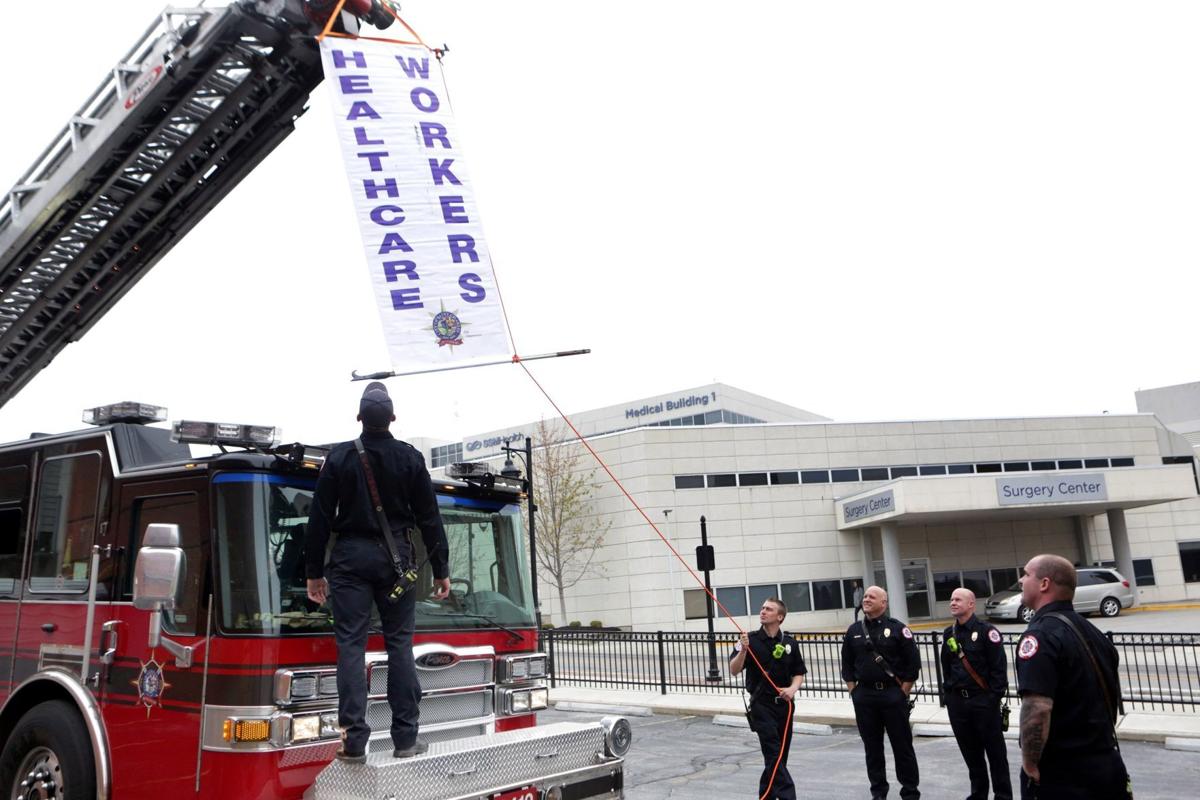 Members of the St. Charles Fire Department raise a banner of thanks Friday, April 17, 2020, outside the entrance to SSM Health St. Joseph Hospital to acknowledge medical personnel dealing with patients ill with the coronavirus. They also delivered a hot lunch to the emergency room personnel. Photo by Hillary Levin, hlevin@post-dispatch.com 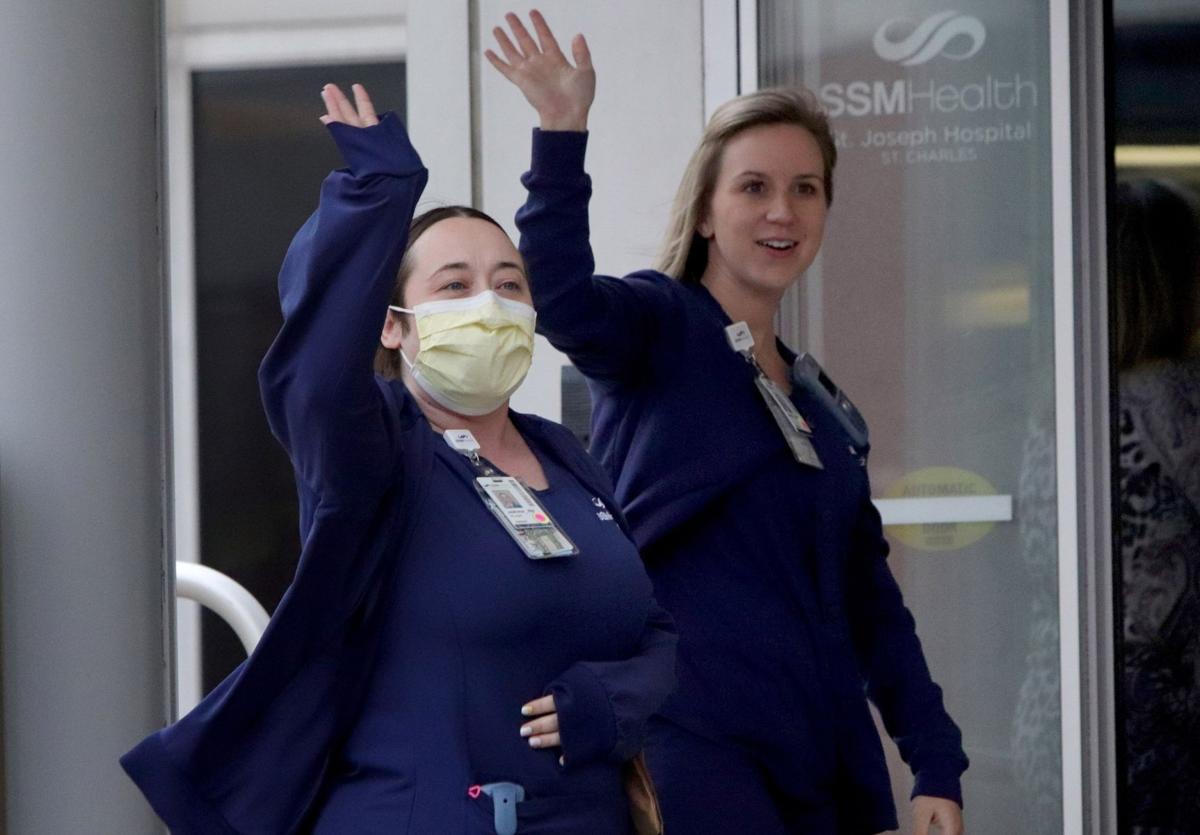 Joanne Brungart, left, and Sarah McCarter, nurses at SSM Health St. Joseph Hospital in St. Charles, wave to members of the St. Charles Fire and Police departments who raised a banner of thanks Friday, April 17, 2020, outside the entrance of the hospital to acknowledge the medical personnel helping patients ill with the coronavirus. Photo by Hillary Levin, hlevin@post-dispatch.com

“Our desire is to be here for another 130-plus years, and we think that these strategies are going to enable us to do so,” said Lisle Wescott.

SSM Health, in a move that alarmed some local government and business leaders, on Wednesday announced the hospital’s labor and delivery services would be moved to the health system’s DePaul Hospital in Bridgeton and St. Joseph Hospital in Lake Saint Louis, which both have newly remodeled birthing suites.

The 333-bed hospital also said it will no longer maintain a 24-hour team of specialists required to handle serious trauma cases, such as severe car accident injuries and gunshot wounds. Cardiac surgery and complex neurosurgery no longer take place at the hospital.

DePaul Hospital will become the centralized site for those surgery and trauma cases, according to the announcement.

Wescott said the complex neurosurgery and cardiac surgeries (which does not include routine cardiac monitoring or treatment for heart attacks or strokes) have become few and far between, making it hard to attract physicians and sharpen their skills with practice. Serious trauma cases also make up a very small percentage of emergencies at the hospital.

Still, she said, change is hard when those services have long been a part of the hospital.

“They are in our DNA and the fabric of this hospital. The community has grown to count on those services being close to home. It’s a heavy day. It’s heavy for our community, it’s heavy for our staff,” she said.

Duplicating staff and services that are in short supply at two hospitals within 6 miles of each other did not make sense, officials said.

“The reality is, health care is constantly changing,” said Candace Jennings, SSM Health region president of community services, in a press release. “It is not the same industry it was 10 or even five years ago. We must listen to our patients and create a care environment that meets their needs while allowing our physicians the opportunity to grow and improve so they can continue to provide the exceptional care our community deserves.”

“When similar services are available nearby, and the cost of running a very expensive service becomes unsustainable, it makes sense to focus on the lines that have higher levels of patient utilization,” he said. “In a metro area, a service line closure seldom reduces overall capacity, and can lead to a more efficient use of health care resources overall.”

SSM officials said the changes will not take place immediately, “but will happen over time.”

Despite SSM’s assurances, local government and business leaders were concerned by the moves.

“I don’t know anything about the hospital business, but as a layman, it doesn’t make sense to me that they would be closing anything in a jurisdiction with over 400,000 people that is growing by 5,000 people a year,” St. Charles County Executive Steve Ehlmann said. “We’re going to set a record for new single-family housing starts. Seems to me this should be an area where we are adding services, not eliminating them.”

Ehlmann, 69, was born at the hospital, along with his father and two sons. Local community and government leaders do not work as closely with the hospital as they did in the past, he said.

Scott Tate, president of the Greater St. Charles County Chamber of Commerce, said he understands the changes from a business perspective, especially as the area around St. Charles tends to be older adults who are no longer having children.

Hopefully, the hospital will be able to grow with the community, he said. “We are hopeful that maybe they will be able to expand other services or make them better, at least.”

In the SSM press release, Jennings said: “Change is never easy. But by having the courage to do these things now, we can move our Mission forward and ensure SSM Health is here to serve our future community’s needs for years to come.”

St. Joseph traces its history to 1885, when the Sisters of St. Mary began operating the hospital out of a five-room home on Chauncey Street in St. Charles. In 1891, construction was completed at the hospital’s current location. The hospital has been expanded and renovated multiple times.

Updated Thursday with comments from the hospital president.

Q • My HDL cholesterol has always been low, in the mid- to upper 30s. Recently I read your article about someone who took 2 tablespoons of goo…

Dear Dr. Roach • I am 57 and finally divorced my cheating husband a year ago. Now that I am interested in dating again, I went for a consultat…

Dear Dr. Roach • After reading several of your columns, where readers asked if they are too old for some activity, I wanted to make older adul…

Dear Dr. Roach • My father is 91, and I am concerned that his elevated blood pressure isn’t being properly addressed. Recently, it seems to ru…

Dr. Keith Roach: Putting a pause on the shingles virus until age 60

Dear Dr. Roach • At what age do you recommend the shingles vaccine? I’m 56 and my doc is recommending it, but I’ve heard that people frequentl…

Members of the St. Charles Fire Department raise a banner of thanks Friday, April 17, 2020, outside the entrance to SSM Health St. Joseph Hospital to acknowledge medical personnel dealing with patients ill with the coronavirus. They also delivered a hot lunch to the emergency room personnel. Photo by Hillary Levin, hlevin@post-dispatch.com

Joanne Brungart, left, and Sarah McCarter, nurses at SSM Health St. Joseph Hospital in St. Charles, wave to members of the St. Charles Fire and Police departments who raised a banner of thanks Friday, April 17, 2020, outside the entrance of the hospital to acknowledge the medical personnel helping patients ill with the coronavirus. Photo by Hillary Levin, hlevin@post-dispatch.com